In certain ways, Life Is Strange 2 is a huge departure from the first game.

It’s set in a different city, with wildly different characters. It ditches the Gossip Girl-meets-Twin Peaks murder mystery for a harsher story about two teenagers on the run. But it’s still an over the top teenage angst fest.

Life Is Strange 2 still wants to make you cry, but it feels less like crying over Riverdale and more like crying while watching the evening news.

2015’s Life Is Strange was a supernatural Catcher In The Rye with teen lesbians. It was earnest, if clumsily written, like any good teen drama. While it touched on issues teenagers face in real life — suicide, bullying, coming out of the closet, predatory teachers — it never felt focused on those things.

It wasn’t an after school special meant to impart a lesson on teen players. It was first and foremost about Max and Chloe’s relationship, and if you got something out of the rest of it, hey, that’s good too.

Life Is Strange 2 shifts from focusing on characters’ relationships to something more political. Sean Diaz, this game’s main character, is a good kid. He’s on the track team, has close a close friendship with his classmate Lyla, is an aspiring artist, and is trying to ask out Jenn, a girl from his maths class.

The most trouble he’s gotten into is when his dad found his weed and he got grounded. He has a wonderful, kind father, who raises him and his little brother, Daniel, on his own.

The first half hour of the game takes place in this family dynamic. Daniel clearly adores his brother, but their relationship is tested by the teenage Sean’s teenage-y moods. Sean’s dad works around the clock as a mechanic and is fixing up a car for Sean’s graduation in his spare time. Their home is warm and full mementos of their life together.

There’s a book about hot rods on the coffee table, one of Sean’s childhood drawings framed on the wall, and a postcard from Puerto Lobos, a fictional town in Mexico where Sean’s dad grew up. I knew the premise of the game would involve Sean and Daniel trying to walk to the Mexican border, but I thought I’d get to see a little more of their home life before they left it.

Things go wrong quickly. Without spoiling too much, the characters’ lives are shattered by a violent incident that, as you’d expect, comes to involve supernatural powers. It’s brutal and shocking, and it’s made all the more moving by the sweetness of what we’ve seen of the family’s life.

As the scene played out, I slowly began to cry. Those few tears quickly turned into wracking sobs. 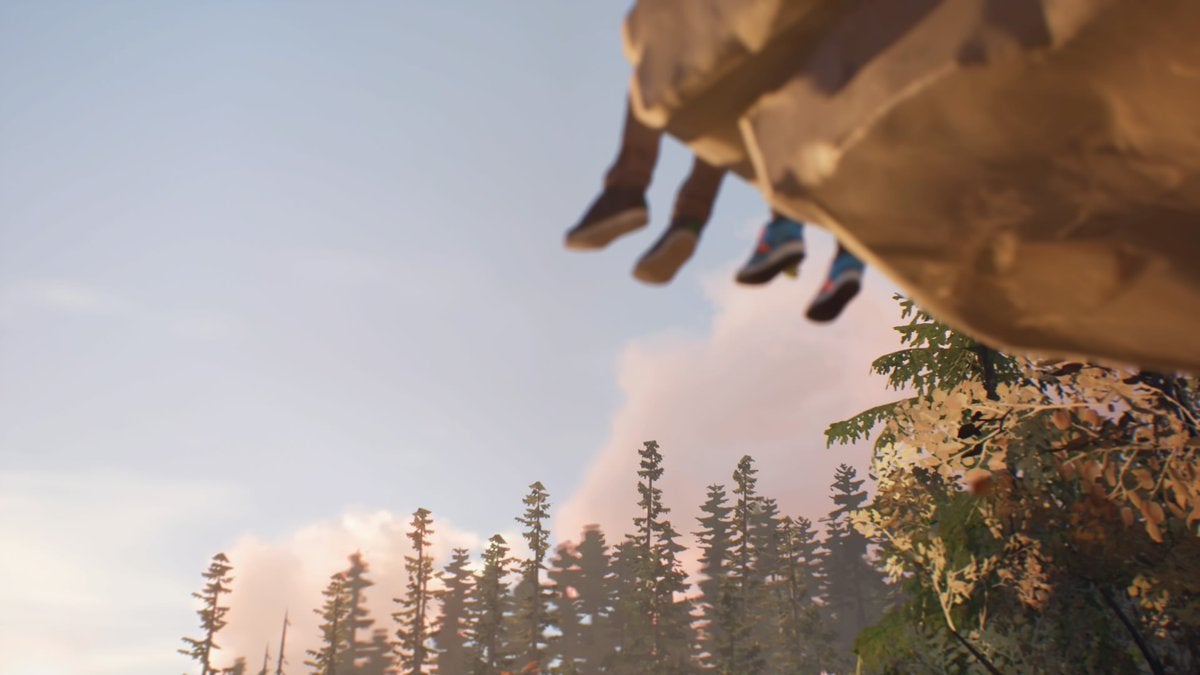 At times this game is stunningly beautiful as well. (Screenshot: Life Is Strange 2, Dontnod)

From there, like the first game, you guide Sean through a series of vignettes as he and Daniel try to flee to Mexico. One night Sean is tasked with finding shelter in a park so he and his brother will have somewhere to sleep. In another, Sean draws a bath for his little brother in a motel room, the first real bathroom they’ve seen in days.

In the course of these activities you make big choices that will eventually branch the narrative, as well as smaller choices that change how scenes play out. The game makes sure to tell you that not only will these choices affect the world, they’ll also change how Daniel behaves. He’s nine years old and impressionable, and by default Sean is raising him and imparting his values onto his young mind.

Where the first Life Is Strange came at its politics sideways, this game faces them head on. Sometimes it’s a little too overt. When characters make references to building a wall I wanted to roll my eyes.

At other times the politics are more on pitch. Life Is Strange 2 expresses the unease you feel as a person of colour in a space populated mostly, or entirely, by white people you don’t know. When Sean enters a rural gas station with his younger brother in tow, both of them now on the run, he looks at the shopkeeper and narrates to himself, “Yeah, we don’t look like we’re from around here. Deal with it.”

The shopkeeper’s presence looms in the background as you shop for food for your brother. If you talk to her, she grills you about why you’re even in the store.

As a little sister I really appreciate interactions like these. (Gif: Life Is Strange 2, Dontnod)

These pointed moments punctuate the tender relationship between the siblings. Sean and Daniel don’t always get along, but Daniel would do anything to protect him. I was surprised by how much Daniel changes his behaviour to reflect your choices. If you steal, Daniel steals too. If you tell him scary stories, he won’t be able to sleep.

The implications of these choices aren’t clear yet. At the end of the episode I promised not to lie to him, and I’m very sure that’ll come back to bite me in the arse over the course of the season.

This first episode of Life Is Strange 2 is a strong, ambitious start. I’m impressed by how willing the game is to tell a story that reflects our current world, and to tell it from the eyes of marginalised people.

That seems like a low bar to cross, but it’s refreshing to play a game that’s transparent about its political intentions. At one point in the game a character looks directly into the camera and says, “Everything is political.” Like a lot of things in Life Is Strange, it’s not subtle. But you can’t say they didn’t warn you.