Two Point Hospital Is A Cure For What Ails Ya

EA clearly had no plans to release a new version of classic PC management game Theme Hospital, so Two Point — a studio led by some people who worked on Theme Hospital — have gone and done it for them.

And while they were at it, they made it even better.

I’ll spare you a long list of recollections and comparisons, since Theme Hospital is 21 years old and wasn’t that popular to begin with, but you should at least know that the formula here is largely the same. You’re in charge of running a hospital (indeed a series of hospitals) and have to build treatment rooms, hire and manage staff and keep the books balanced.

As you’d expect given the ex-Bullfrog presence on staff — or just given the subject matter — Two Point Hospital is very light, built on comedy rather than tragedy, which is for the best since it’s a game where you’ll be dealing with sickness and death at every turn. It’s far sounder for everyone’s mental health if the conditions you’re treating involve clown suits, Freddy Mercury impersonators and saucepans than terminal cancer or shooting victims. 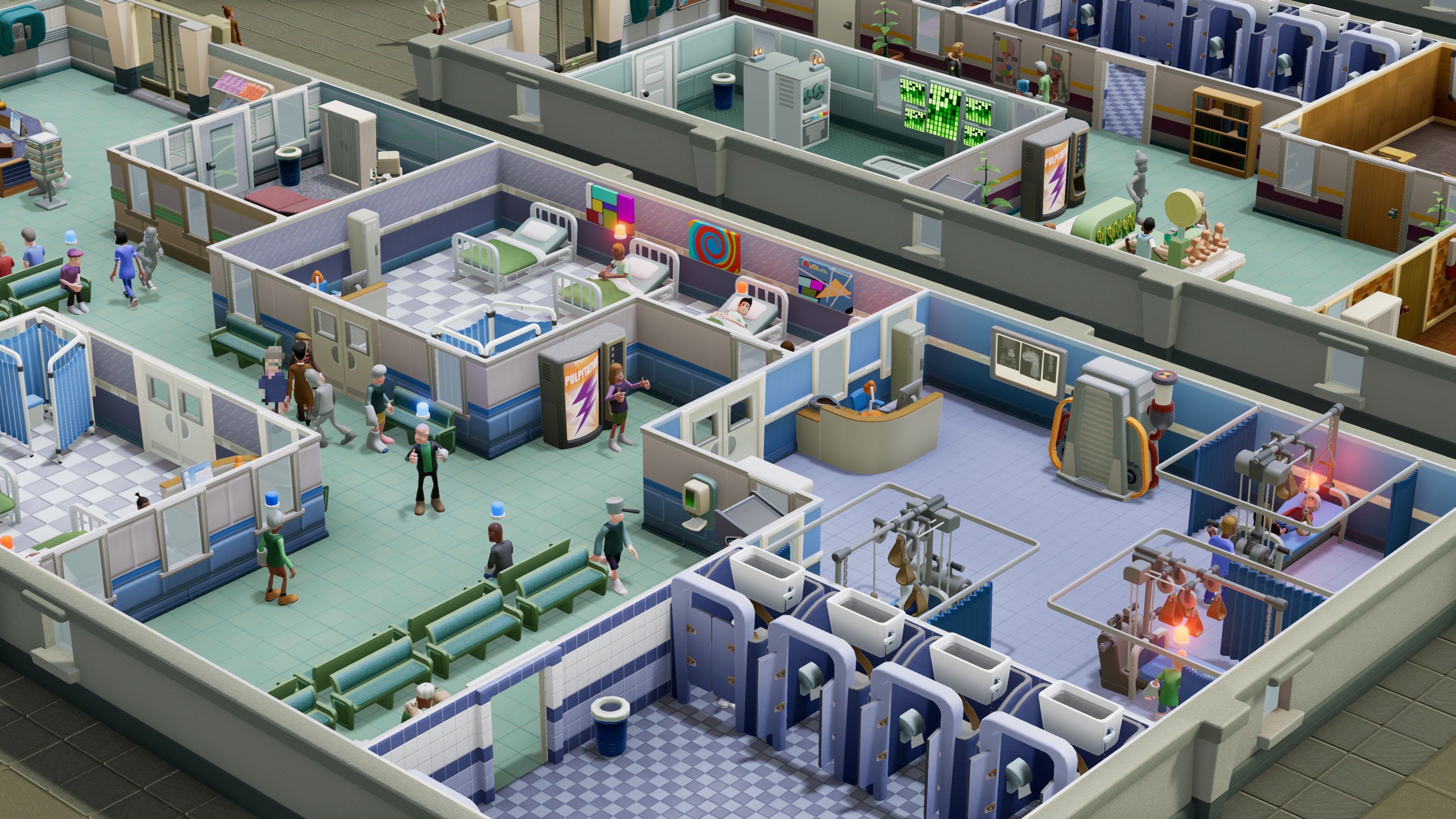 It’s always fun seeing something you’ve made grow, and like other construction + management games (Cities: Skylines, The Sims), the core enjoyment from Two Point Hospital comes from building a clean and functional facility from nothing, fastidiously perfecting it as you go along.

It’s extra fun in Two Point Hospital, though, because it has one of — if not the best — construction toolset and building system in video games. Just the simple act of picking out a bench or plant, rotating it then dropping it into a room is a pleasure, each placement met with a “pop” that resonates both visually (with a cute little wiggle) and through the speakers.

That system is also incredibly smart. Everything you place, from rooms to doors to magazine stands, sticks and aligns to a grid, knows when its near a wall and gives you feedback on whether it’ll be impeding foot traffic or not. Once placed, you can just hover your mouse over it and critical information will be displayed, like how much heat a radiator is actually generating in a hallway.

That’s stuff that could have been handled by menus or secondary commands, and become a tiresome chore about five minutes in, but the way it’s taken care of here with only the mouse and left button is incredibly elegant. Indeed building might be too fun in Two Point Hospital, as some of the nerdier aspects of the game can be too easily neglected in favour of aligning water fountains and installing snack machines.

There’s all the trappings here of a more serious strategy game, with wages, staff training, hiring (and firing) decisions to make, equipment upgrades, challenges being issues…and yet that stuff can often feel like noise in the background, an annoyance that you know is there but rarely boils over into something that warrants any serious time or attention

I’m not sure whether that’s just because the game is easy or if there’s just not enough punishment for running a hospital into the ground to make sensible bookkeeping a necessity, but anyone who wants an administrative challenge, and not just a construction one, might find Two Point Hospital a little light.

Everyone else though, who are just here for bad jokes and the joy of building, will find this one of the best game of its type in years.