Valkyria Chronicles 4 is a game of extremes. Its romantic attitude towards soldiers clashes with a desire to tell a tale of mass violence and corpse-laden battlefields. It is as intimate as it is loud, and each moment captivates even if the parts are often greater than the whole.

The story follows Commander Claude Wallace as he commands a small platoon of soldiers during a massive war. The Atlantic Federation, a small conglomeration of city-states and allied democracies, finds itself facing off against the Eastern Imperial Alliance’s militaristic expansion.

This review has been republished following the release of Valkyria Chronicles 4 this week.

Claude’s squad fights on the front lines of the conflict, helping lead the charge in the Federation’s last-ditch attempt to capture the Imperial capital in a massive campaign called Operation Northern Cross.

It is a campaign doomed to failure, and the squad finds itself caught up in a desperate attempt to survive in enemy territory.

Valkyria Chronicles 4 follows a pattern familiar to the tactical-RPG genre. It is split between lengthy preparation time in your base, and high-stakes battles where you control your platoon, leapfrogging them around the battlefield to take down the enemy.

This is another example of its use of extremes; the focused calm of preparation and R&R breaks apart once battle begins. This split between pseudo-spreadsheet management and active conflicts is the key to Valkyria Chronicles 4’s success. 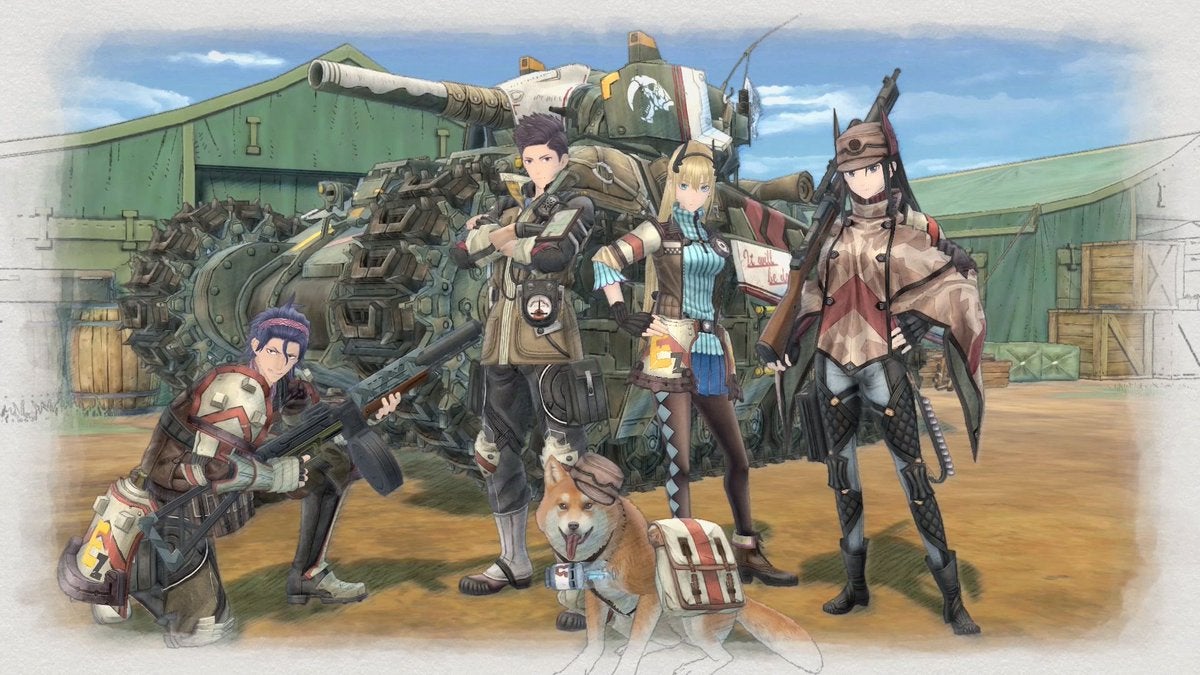 It was a battlefield... But it was where we grew up.

Some of the best tactics gameplay around, smart use of characters, unique visual aesthetic.

Nearly 30 hours. I still have a few missions left.

Valkyria Chronicles’ raw gameplay is polished to perfection. Its unique battle system involves both higher-level grid management and ground-level third-person action. You start each round looking at a map of the battlefield, but whenever you select a soldier, the action zooms down to their perspective and the action plays like a third-person shooter.

You control their running, dodge incoming fire, and adjust their aim like any action game. Every unit has a certain amount of distance they can travel before exhausting themselves.

The trick is learning the limitations of your troops so you can manoeuvre them to the best possible field position to strike at the enemy. As a result, battles are much more frantic than the kinds of engagements you experience in a game like X-COM or Battletech. Pressing troops through incoming fire requires you to react on the fly, even as you manage the higher-level affairs of the battlefield.

Every new battle is a chance to test your daring, and each new victory feels well-earned. 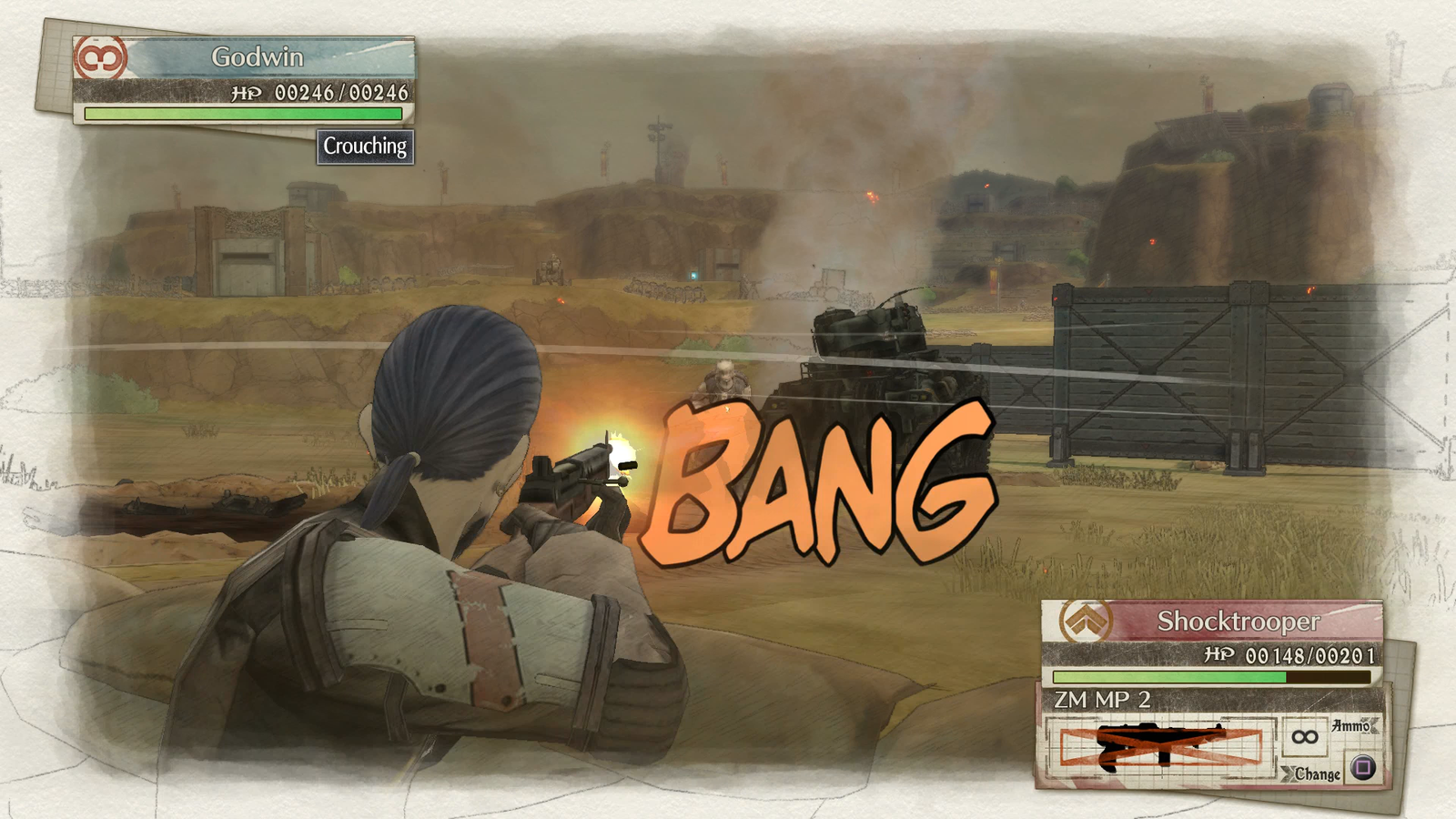 Much of this has to do with how creative Valkyria Chronicles 4 gets with its combat scenarios. While plenty of missions offer straightforward objectives such as storming an enemy base or disposing of all opposition on the field, many more find unique twists that require on-the-fly adjustments and flexibility.

One early mission to mark tanks for artillery bombardment is complicated when the squad’s radio communication is jammed. Instead of disposing of the tanks by yourself, you need to have your snipers shoot coordinates into numerous signal towers. One high-stakes mission to cross a key strategic line involves managing a small contingent of tanks.

Another mission adds a magical foe who can blast large swathes of the field with energy attacks. These are deadly, but can also be used to transform the environment to your advantage. Valkyria Chronicles 4 is a wonderful chameleon that changes to offer new challenges with each engagement.

For all of this excitement, things can often come to a grinding halt as some challenges skew towards the unfair. Others can glitch out in strange ways that test player patience. Valkyria Chronicles 4’s dedication to providing new complications can sometimes make it feel like the game is cheating. Enemy reinforcements will spawn directly behind your soldiers, and at least one opponent has the ability to literally undo your last turn and revive all of their fallen troops.

These shocking swerves sometimes feel unfair. I’ve never known pain quite like the time Valkyria Chronicles 4 spawned a new kind of rocket-launching troops with new weapons that destroyed my armoured tank in one hit.

Worse, some combat scenarios glitch out and refuse to perform as intended. In one notable example, my task was to sneak through a battlefield to strike a few key targets.

After an initial failure, I restarted the mission only to have the enemy discover me before my turn even started. This happened multiple times before the game saw fit to allow me to not automatically fail before either the enemy or I had the chance to take an action before the mission started.

In moments like these, it is tempting to walk away from Valkyria Chronicles 4, but I thankfully found that pressing through led to more enjoyable scenarios. 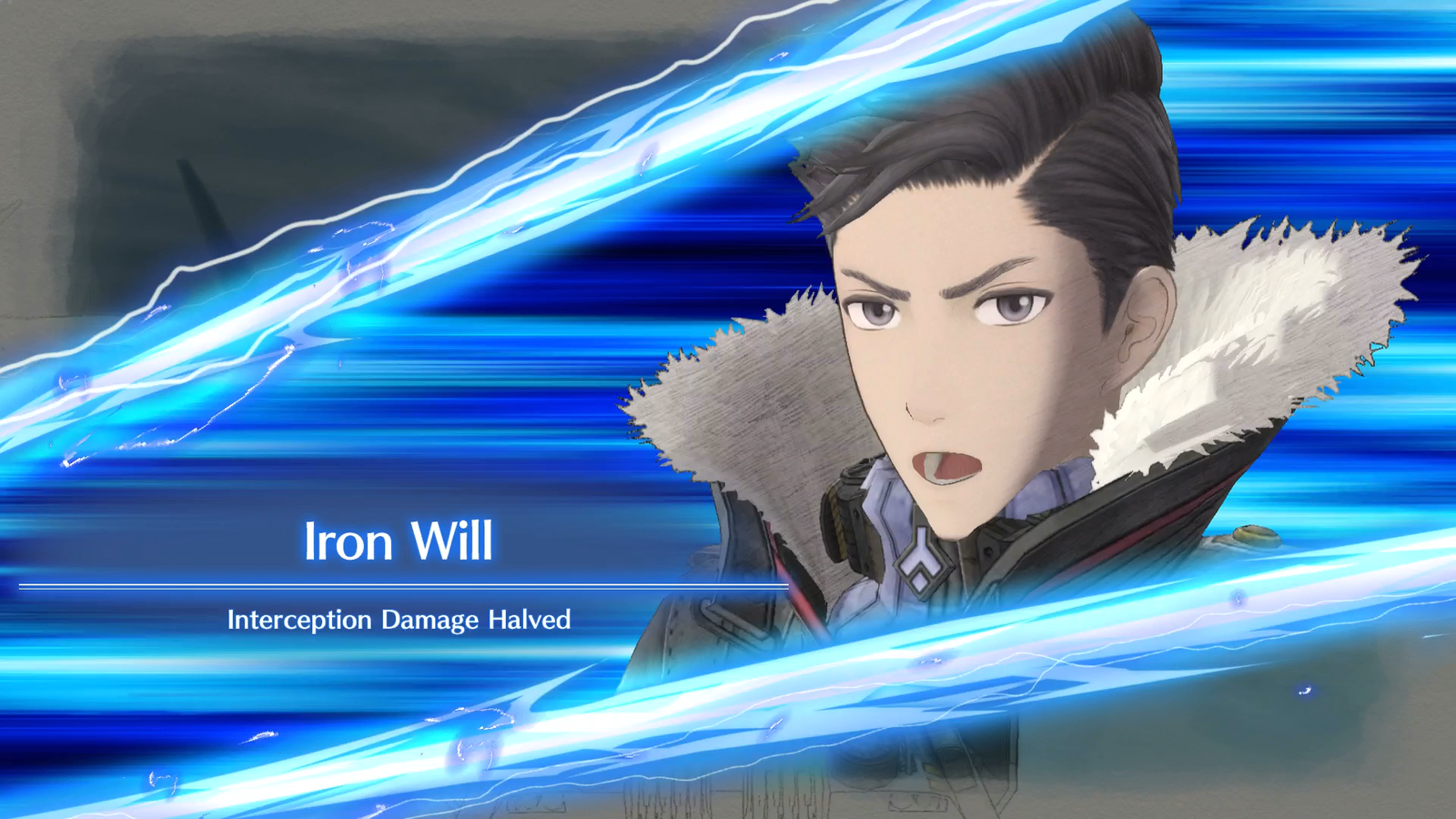 Claude has a positive potential that can reduce fire on his tank while he moves positions. 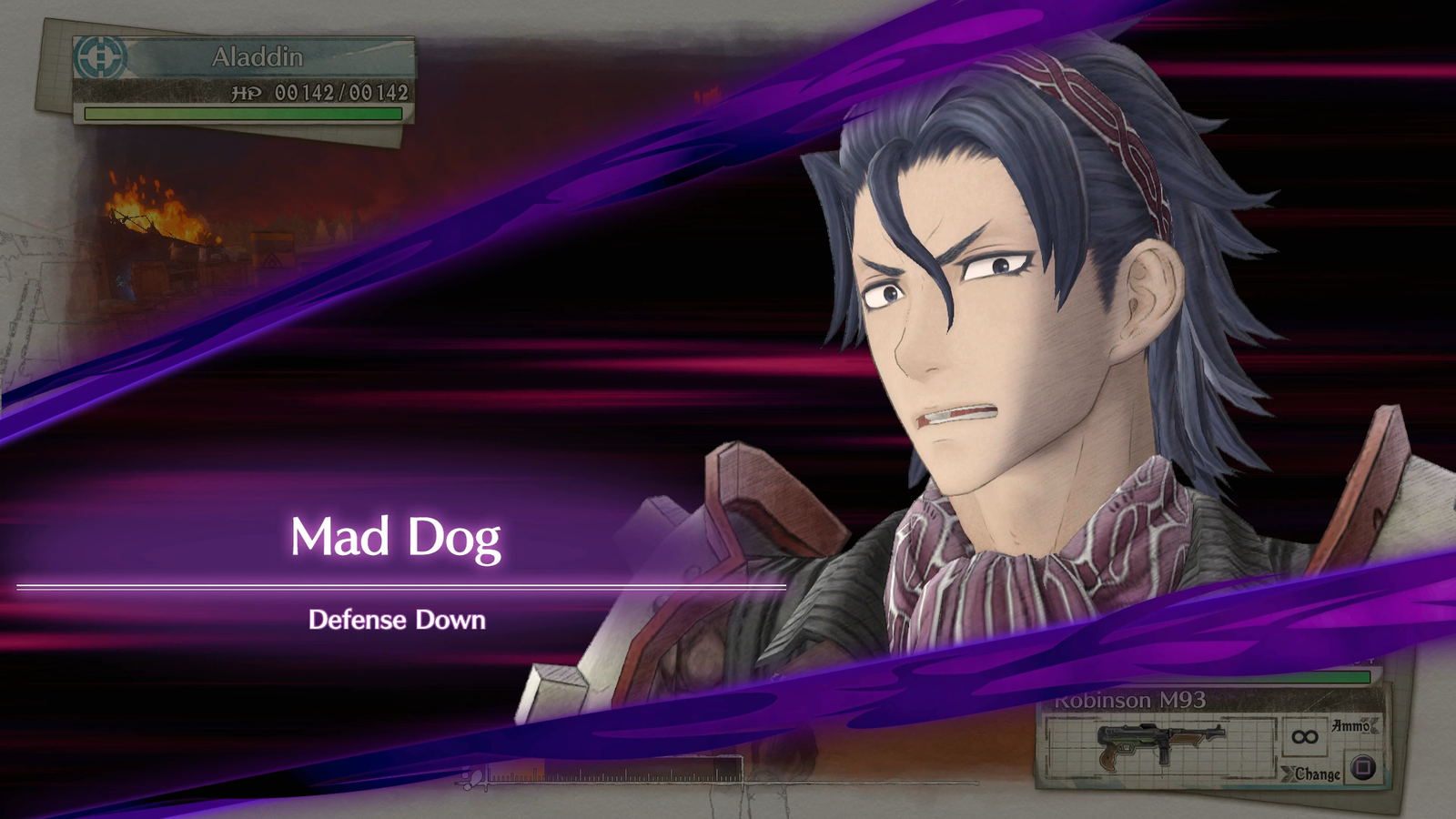 Raz is brash and has a debuff that sometimes triggers when he runs ahead of his allies. 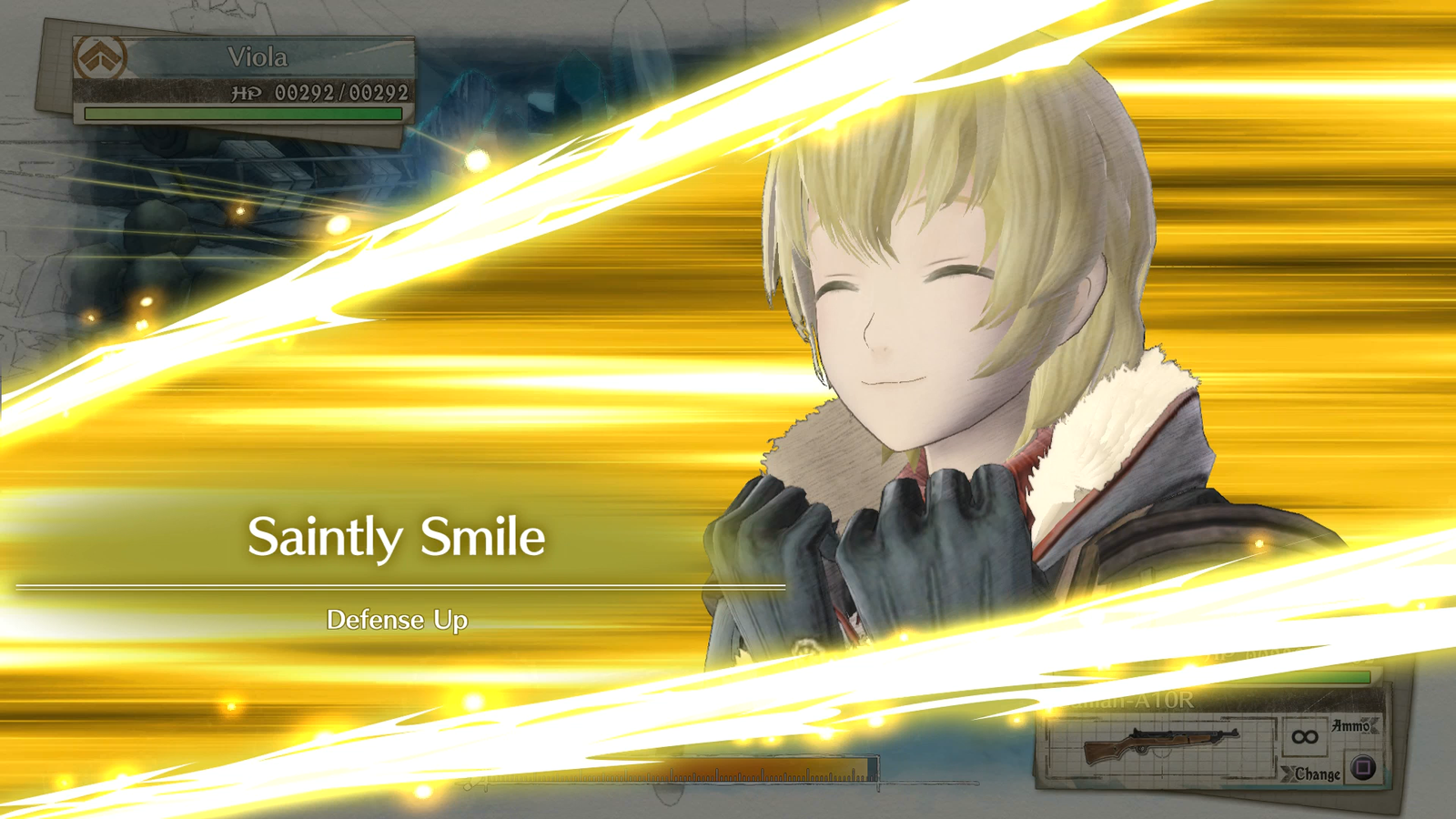 Nico gained a special ability that raises her defence after I completed her side story.

Where the scenario design can occasionally stumble, the backend systems show a great deal of care. Valkyria Chronicles 4 gives each and every soldier their share of quirks, as well as personality-driven bonuses and detriments. These largely manifest in “potentials,” which are buffs and debuffs that fire when specific conditions are met.

Sometimes these are generic and obvious—an ace sniper might occasionally trigger an accuracy bonus—but they are more often tailored to the individual soldier. I’ve had nature-loving scouts who receive evasion bonuses in grassy terrain, nervous shocktroopers who have anxiety acting around female troops, and a blindly faithful corporal less likely to dodge because they believe God would never allow them to get hurt.

These abilities transform based upon each character’s personal development, which is bolstered by the side content. Valkyria Chronicles 4 is an exhaustive game brimming with optional quests, which contain some of its strongest story moments. My aforementioned faithful corporal received a powerful defensive buff ability after successfully befriending a gruff mercenary member of a highly persecuted ethnic group.

In another case, one of my most brash soldiers had their “Authority Issues” negative potential replaced with the positive “Team Solidary” trait after I completed an optional substory where she and other near-insubordinate troops participated in team-building drills.

Valkyria Chronicles 4 cares deeply about its characters, and understands how character development can be implemented into the mechanical design. Picking up on Fire Emblem’s groundwork, it understands the power of squad banter as well. Every character gets a chance to shine, far more than whatever star squad you’ve assembled in X-COM. 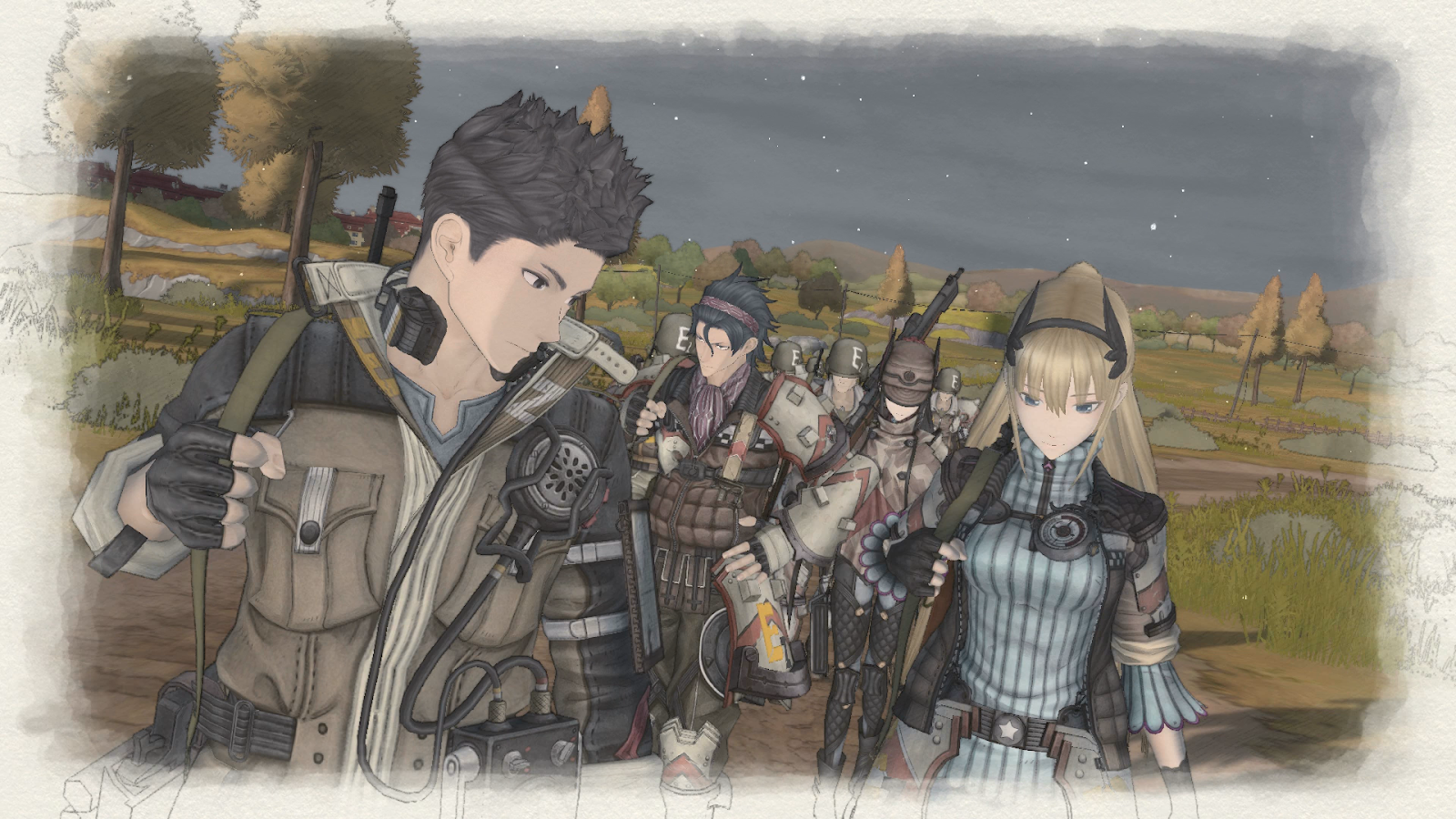 This deftness of storytelling isn’t always reflected in the larger plot. Valkyria Chronicles 4 has an ambitious scale that covers a variety of fronts and locations from occupied towns and frost covered wastelands. Operation Northern Cross—loosely based on the Axis powers’ ill-fated Soviet invasion plan Operation Barbarossa—is a costly affair.

As the Federation pushes towards the Imperial capital, the complications only mount. These moments are suitably dire and dreary, as Valkyria Chronicles 4 hones in on the massive human cost of war. Land is razed, troops freeze, rivalries form. These moments are treated with care, but the emotional impact never quite lands.

Much of this has to do with the clean, pretty anime approach. For all of the cost of war, that horror is never quite as bloody or shocking as it could be.

While the story is more grounded than the comparatively light hearted Valkyria Chronicles 2, it still can’t quite find the right ratio of trauma to shenanigans. Grab-arse anime lechery lives next to political intrigue, charged interpersonal drama is punctuated by comedic misunderstandings.

Once, after occupying an Imperial village, I watched my squad clash with another squad in a mock battle—literally taking place in the captured village square—in order to see who got to enjoy stockpiled food supplies. This imbalance is endemic to the series, but the first Valkyria Chronicles still dared to focus on ethnic persecution and topics as dire as concentration camps.

Valkyria Chronicles 4 feels much lighter in spite of the scale of the war, and only really starts to worry about issues like weapons of mass destruction after some time. This isn’t to say that the lighter episodes aren’t appreciated, but they can sometimes be hard to reconcile with the game’s darker thematic goals. 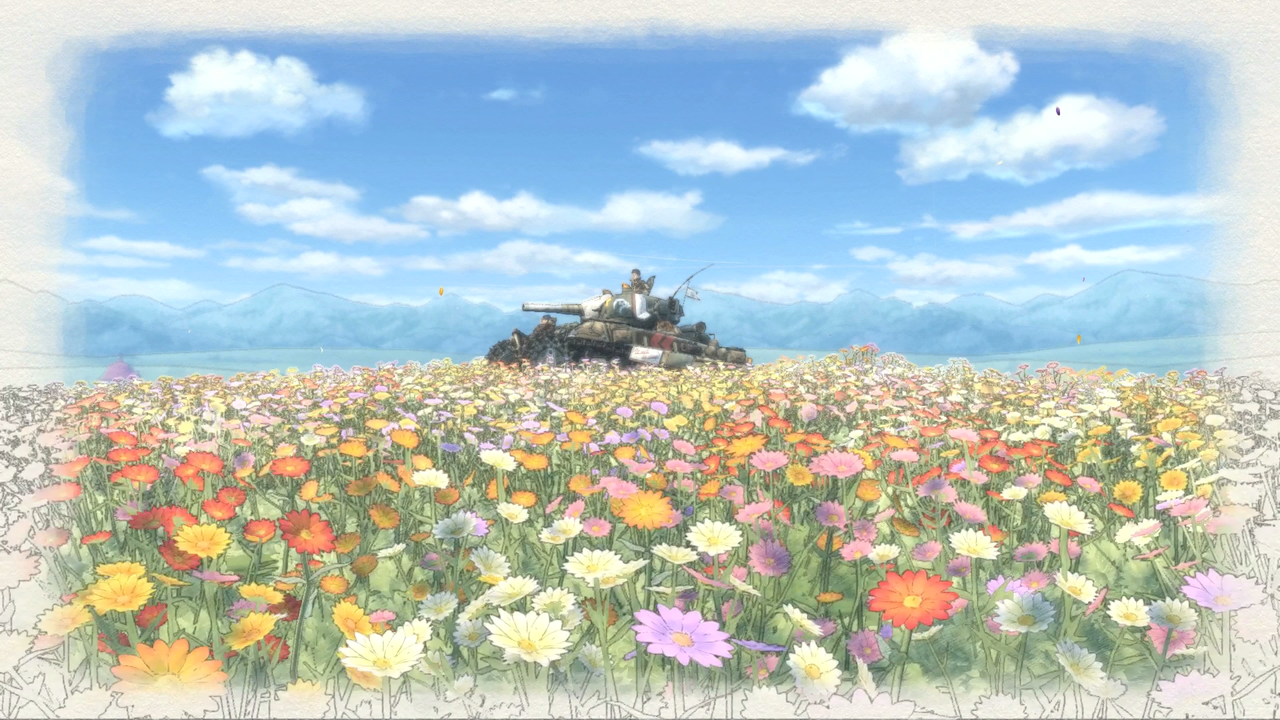 In spite of this tension, the mood is tempered by an unique aesthetic that gives everything a wistful feeling. The visuals uses a special shader, similar to cel-shading, which gives each scene an impressionistic feel. Whether it’s the flower-filled countryside or the snow-swept northern reaches, each scene feels painterly and self-reflective as a result.

Valkyria Chronicles 4 feels like a half-remembered dream. The framing device presents the story as told through Claude’s wartime journal. Each chapter is an episodic series of side vignettes and battles that feel like a scrapbooked account of a larger campaign. While the narrative’s ambitions sometimes clash tonally, the presentation helps mute that tension into something bittersweet.

These various pieces—smart combat design, strong character work, and unique aesthetics—never quite unify into a completely cohesive package. Valkyria Chronicles 4 shifts from moment to moment, sometimes frustrating and often dazzling. But I cannot help feeling regret for the missed opportunities.

Valkyria Chronicles 4 is a confident game that doesn’t always earn its bravado. It is beautiful, thrilling, and paradoxically fractured. But if you’re able to endure the clumsier scenarios, you’ll find a rousing war story with plenty of challenge.