A Hotel Strike Was The Talk Of This Year’s TwitchCon

The chants rang out all day, every day of TwitchCon. “Check out! Check out! What do we want? A new contract! When do we want it? Now!” As Twitch’s massive convention spilled out into the streets of downtown San Jose, California last weekend, it was impossible to miss the workers on strike in front of the Marriott hotel.

As the convention kicked off on Friday, Marriott workers had already been on strike for 22 days. At the heart of it all is a contract dispute between Marriott International and unionized workers whose contracts expired over the summer. The approximately 7,700 workers who have taken to striking—in San Jose, as well as San Francisco, Oakland, San Diego, Boston, Detroit, and Hawaii—say that current terms make it impossible for them to live in these places without working more than one full-time job.

Workers are also demanding improved workplace safety, especially as it pertains to Marriott’s “Green Choice” program which they say sometimes forces them to rush while cleaning especially unkempt rooms, which can lead to injury when heavy physical labour is involved. Lastly, workers have a wary eye on the looming specter of automation, which they hope will augment—not replace—their jobs.

In San Jose, the picket line was impossible for TwitchCon attendees to miss as they walked to and from the convention. At all hours of the day and much of each night, around 10 to 20 workers marched up and down a line on the footpath in front of the Marriott, chanting demands and slogans into megaphones.

While waiting to cross the street, attendees would stop, stare, and comment. Many were also staying in the Marriott and, as a result, ended up crossing the picket line on multiple occasions while striking workers yelled for them to check out. 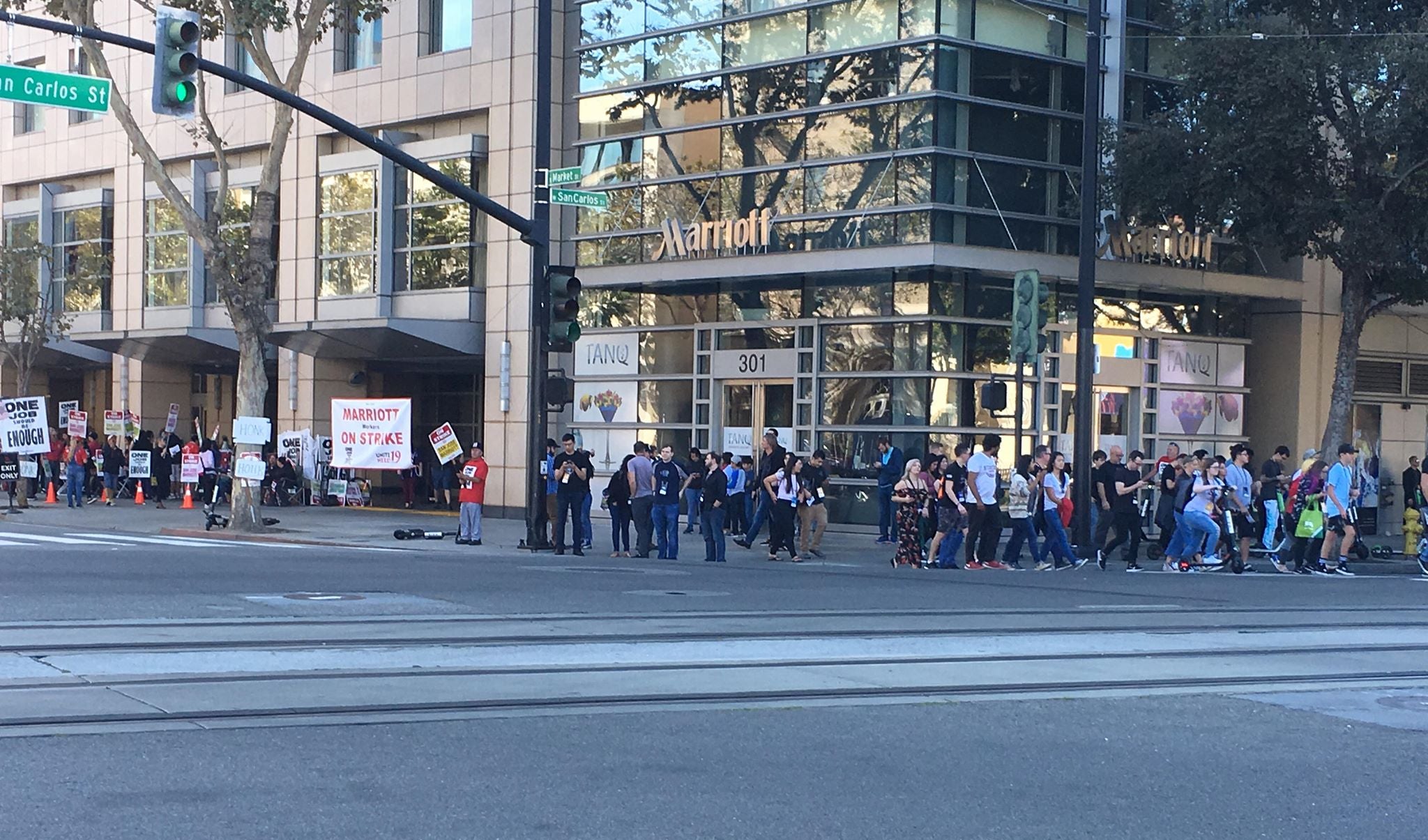 It was a fraught, sometimes tense scene. At one point, I witnessed a woman who was staying at the hotel emerge from the Marriott and yell at the strikers. Another time, a flock of people brandishing TwitchCon badges rode toward the picket line on scooters, forcing workers to dart out of the way.

While observing the strike for just an hour on Sunday, I heard three different attendees grumble things like “I’m so fucking tired of these people.” Meanwhile, on social media, attendees expressed annoyance at being woken up early by strikers’ chants and individually called out for crossing the picket line, and some even said they felt unsafe because of their proximity to the strike.

In conversations I had with attendees walking past the picket line, I picked up on a recurring theme: People said they would be supportive, but they were annoyed because the strikers were inconveniencing them and hurting their experiences—instead of somehow taking direct aim at Marriott International.

I replied to one person that the workers didn’t really have any other options—they’re in the business of convenience, so their strike will, as a necessity, be inconvenient to hotel guests.

“Hm, I guess that makes sense,” he replied. “But I still don’t really get it.”

“I felt stuck between a rock and hard place. I want to be supportive of the protesters, but I booked my hotel, like, six months ago.”

I also witnessed attendees walk by and express their solidarity with the workers, either by hollering or raising their fists. Another handful that I spoke to weren’t entirely sure what to make of the whole thing, but told me they supported it on paper.

Two attendees who were staying at the Marriott expressed regret that they’d made their reservations before the strike began.

“Normally I probably would’ve gone somewhere else, but everything was booked,” one told Kotaku. “It’s hard to make plans so far in advance.”

“I agree with what they’re doing,” said the other. “People need to be able to get paid and make a living. And it hasn’t been bad. They haven’t been a problem, the strikers.” 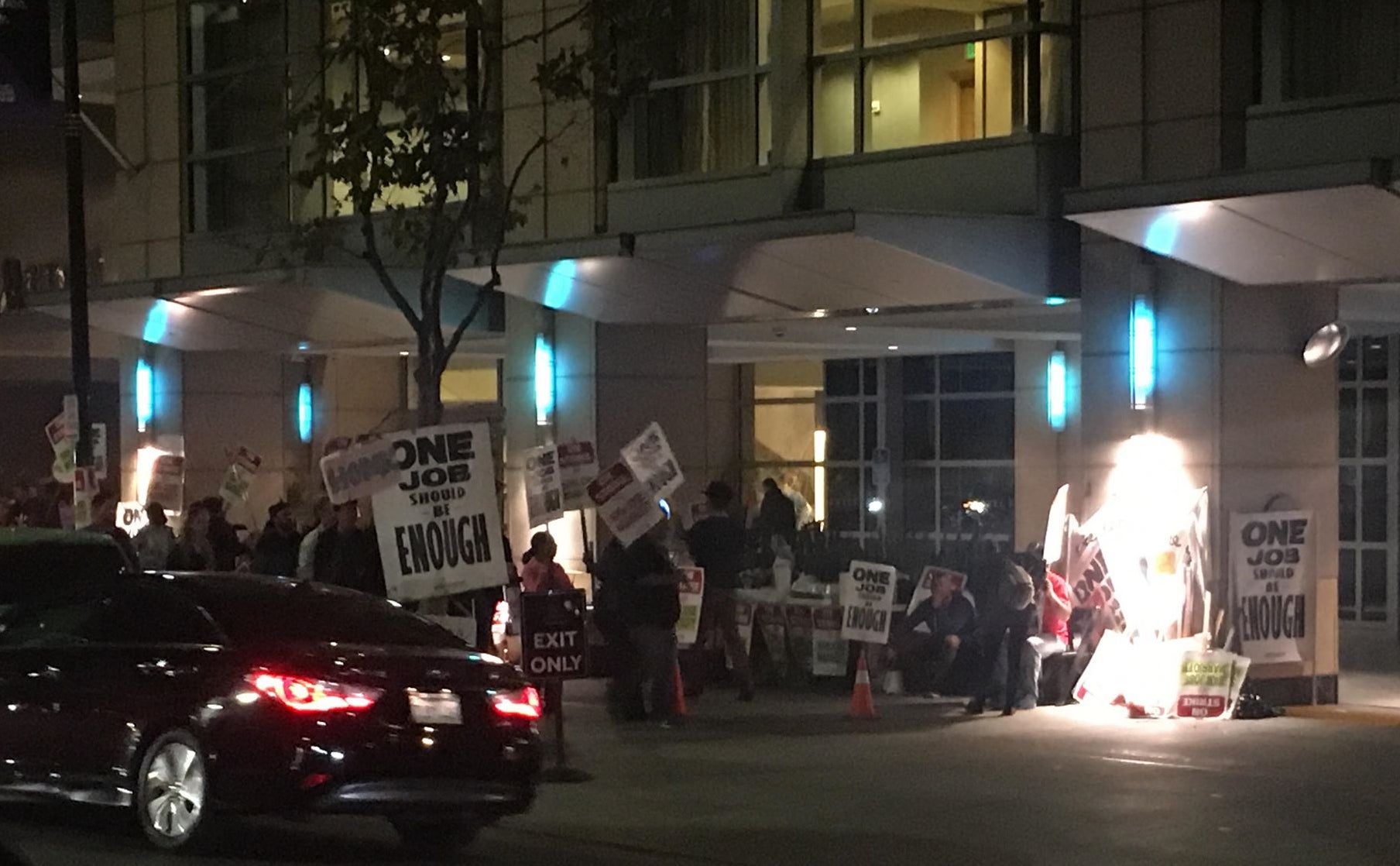 I heard similar sentiments from people in the industry, including a friend of mine who works at Unity. “I felt stuck between a rock and hard place,” she told Kotaku.

“I want to be supportive of the protesters, but I booked my hotel, like, six months ago.” Other industry friends who were not staying at the Marriott, meanwhile, told me they wondered whether or not their companies would have re-booked them at a different hotel if it had come to that.

Sarah McDermott, a spokeswoman for the union representing the Marriott workers, described the convention situation as “intense,” but was grateful for the support shown by portions of the TwitchCon crowd.

“We’ve had people who are attending TwitchCon who have been very sympathetic and have come by and grabbed fliers to hand out to fellow convention goers and asked if they could stream from the picket line,” she told Kotaku on Saturday.

“We’ve also had some people who don’t really understand what’s going on or what a strike is, and it’s just an annoying inconvenience to them.”

She also noted that some attendees who were planning to visit the Marriott for TwitchCon-adjacent events and friend gatherings decided not to because they didn’t feel comfortable crossing the picket line. Additionally, she said, some of the strike’s members are into video games themselves, so it was “interesting to see them try to call on people as fellow gamers to not cross the picket line.”

One person even decided to leverage Twitch itself, starting a channel called Scabstream to document people crossing the picket line and raise money to contribute to the strikers’ GoFundMe.

The channel’s most popular clip appears to catch Twitch millionaire and proud bus owner Tyler “Ninja” Blevins crossing the picket line, but the footage is blurry, and it’s tough to say if it’s really him (there were, unsurprisingly, a lot of people rocking his blue-haired pixie boy look at TwitchCon).

I reached out to Ninja for comment, but as of publishing, he hadn’t replied.

I also reached out to whoever was behind Scabstream, but they didn’t reply either. Additionally, I asked four different strikers if they had any idea who was hosting the stream, and they all said they didn’t know.

The only concrete sign I could find of this person’s existence was a literal sign hanging outside the Marriott’s entrance. “DON’T GET CAUGHT,” it read, also displaying logos for Twitch and Scabstream. The stream, however, only went live on October 26 and 27, and has shown no activity since.

“I’ve seen some people who’ve said, ‘Yeah, we really get where you’re coming from. We’re with you. And then there’s a lot of people who just don’t have a lot of consciousness about labour issues or unions whether it’s for themselves or other people.”

Between systemic encouragement of long hours, stratified streamer tiers that ensure only Twitch is maximally profiting from streamers’ work, and issues that come part and parcel with independent contracting like unstable pay and a lack of healthcare, Twitch has labour issues of its own.

Some streamers are acutely aware of this. One prominent streamer I spoke to, Adam Koebel, said he might’ve ended up skipping TwitchCon altogether if he’d booked a room in the Marriott and then found out about the strike. But, for the most part, Twitch streamers skew young and come from a generation that lacks firsthand experience with things like labour unions. McDermott saw both sides of the coin during TwitchCon.

“I’ve seen some people who’ve said, ‘Yeah, we really get where you’re coming from. We’re with you,’” she said. “And then there’s a lot of people who just don’t have a lot of consciousness about labour issues or unions whether it’s for themselves or other people.” 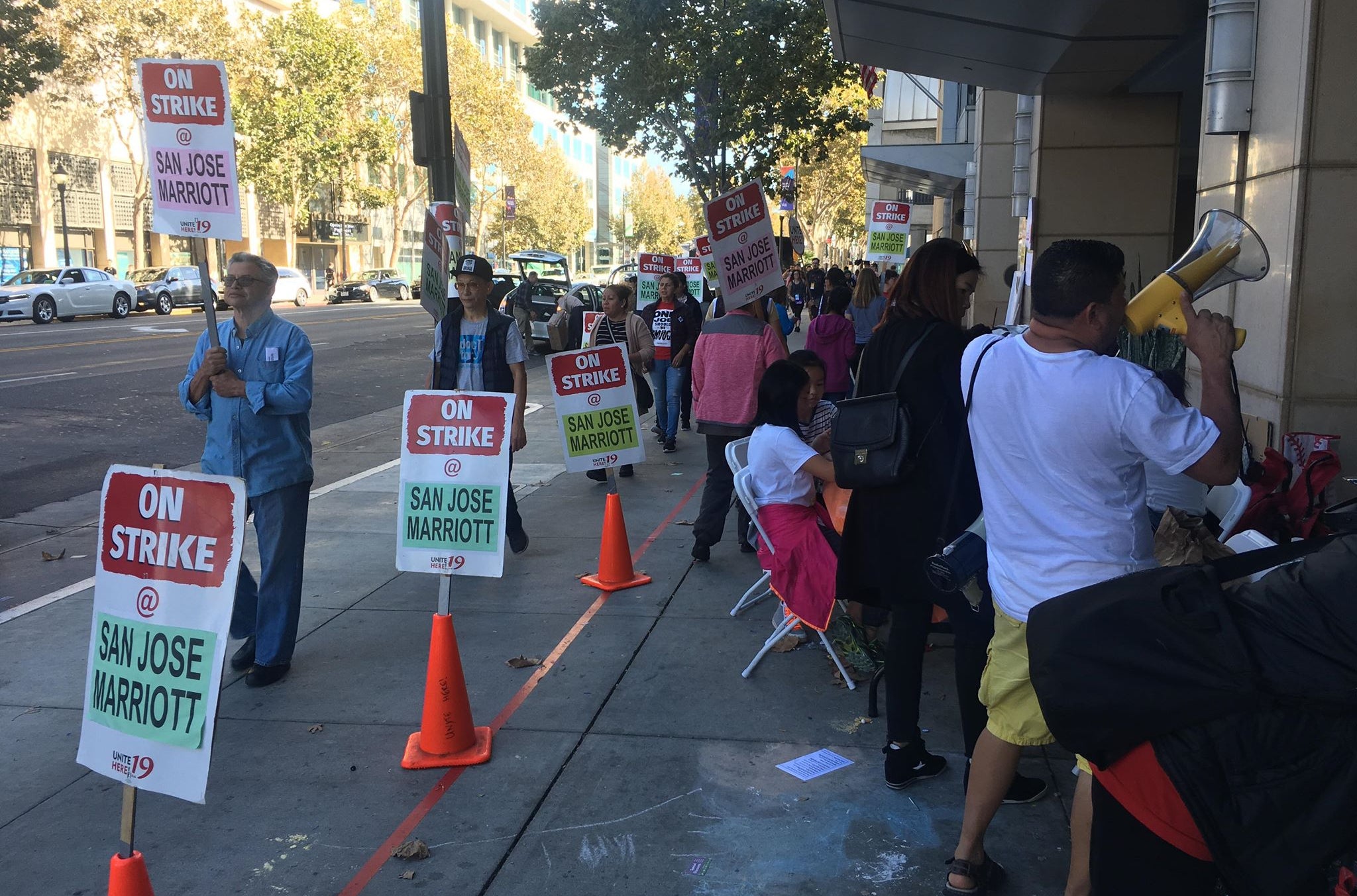 She said, though, that things are looking up for the strikers in San Jose. They’ve received support from the Democratic Socialists of America, the South Bay Labour Council, and local politicians. There’s also a negotiation meeting with Marriott set for Tuesday, according to McDermott.

Kotaku reached out to Marriott International for confirmation of this meeting, but the company didn’t reply. In a statement to USA Today earlier this month, however, it said it was “disappointed” that the union had “chosen to resort to a strike instead of attempting to resolve these disputes at the bargaining table” and added that it was activating “contingency plans” to keep services going.

“While we respect our associates’ rights to participate in this work stoppage, we also will welcome any associate who chooses to continue to work,” the company said.

26 days later, though, the chants continue—and it sounds like they won’t stop until Marriott starts singing a different tune.

“I think the workers are ready to keep the striking going as long as they have to until they get what they need,” McDermott said.