In the months leading up to its launch, DC Comics touted its new Black Label imprint as a part of its publishing arm where big-name comics creators could tell bold, mature stories about its heroes, exploring aspects of their lives that more mainstream titles tend not to.

Brian Azzarello and Lee Bermejo’s Batman: Damned made the biggest splash, in part, because a few panels featured a full frontally-nude Bruce Wayne. Now DC is wondering if it made a mistake.

When news first broke that Damned showed off Bruce’s goods, there was an understandable amount of buzz because, historically, comics marketed to broad audiences like DC’s have shied away from really centring male bodies in a way that reads as sexual (Nightwing being the exception that proves the rule.)

In response to the internet’s thirst for the Caped Crusader and the apparently unwanted attention it brought to Batman: Damned, DC edited out the panels in question from digital editions of the first issue.

According to the comic publisher’s heads, more changes are in store for DC Black Label going forward — changes that are a direct response to the whole Batawang “controversy”.

Speaking to Polygon at this year’s New York Comic Con, DC Publishers Jim Lee and Dan DiDio were frank about their feelings that including a penis in shadow was a “production error” DC regrets because, from the company’s perspective, it dominated Damned in a way that was less than ideal.

The focus of the readers, Lee explained, is meant to be on the story itself in addition to the art — and in the future, the publisher’s rethinking just what all the Black Label is meant to be:

It’s made us, certainly, look at what Black Label is and think about whether these elements are additive to the story. And that’s something that we’ll be mindful of going forward, because I don’t think we want necessarily a repeat of what happened with the first issue.

DiDio echoed Lee’s sentiments and added that part of the reason DC’s taking this so seriously is because a number of older series with similarly darker, more adult content are being reprinted under the Black Label:

As a matter of fact, we’re excited by all the books that we have under Black Label. And it’s an important line for us, so much so that we’re actually repositioning some of our older material that has that same tonality and bringing it in and reprinting it under the Black Label name.

Had Damned been released like any regular Batman comic, lumped in with the likes of, say, the Justice League or Titans books, DC’s reaction to this would be a bit more understandable. But Damned is explicitly marked as being intended for “mature readers”, and that’s kind of the whole point of “Black Label” branding.

For example, Sean Murphy’s Batman: White Knight is a recent series set to be reprinted under the Black Label branding, and one of the differences between this printing versus the original is that it will now feature a more explicit sex scene between the Joker and Harley Quinn that was initially censored.

2. If you've read White Knight, you know I went out of my way to empower Harley Quinn. Both versions (Marian Drews). I'm not going to undo that hard work by suddenly pulling a cheap gimmick.

The implication is that books such as these aren’t really meant for younger readers, and that you go into them knowing that the subject matter is going to skew decidedly more adult in its tone and themes.

For example, Damned also features panels in which a stabbed and/or shot Batman is oozing copious amounts of blood. There are panels focused on a woman’s breasts, and a panel of a horrifically crucified, near-naked Joker.

All of these things could be considered risqué or inappropriate for a comic book that an impressionable young person might randomly pick up — and yet, a penis, or rather the attention paid to a penis, is cause for alarm. 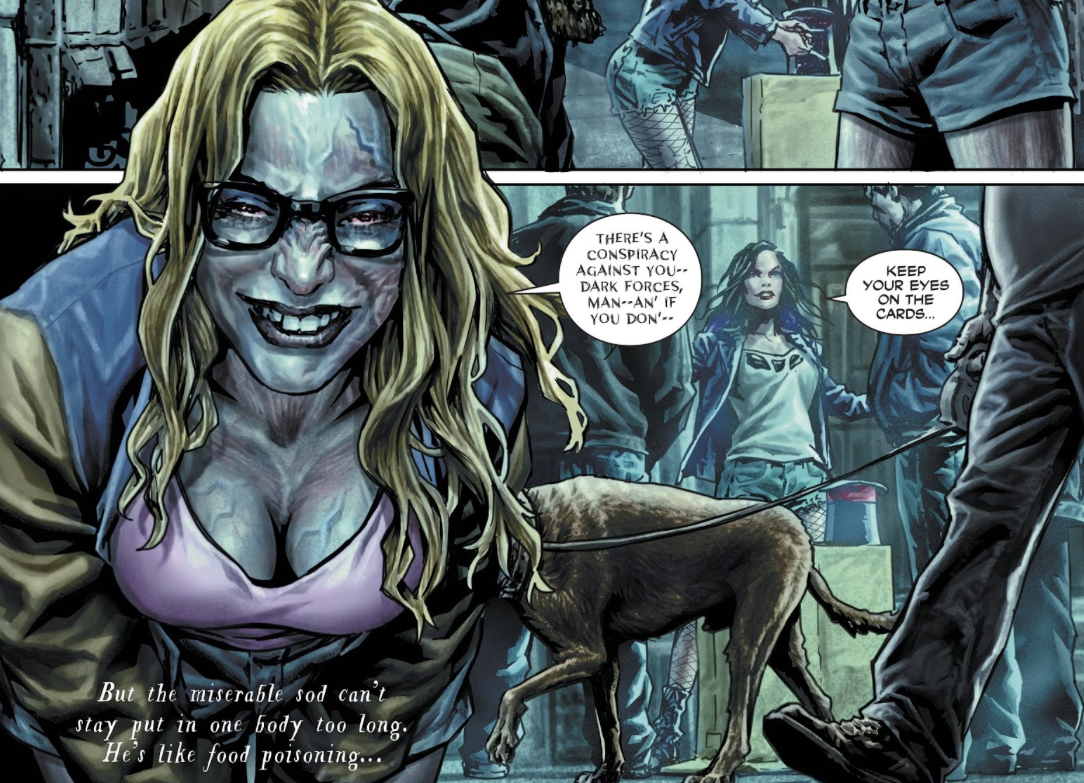 A woman possessed by Deadman taking a moment to very casually get all up in your face. (Image: Lee, DC Comics)

What’s more, Batman: Damned didn’t at all suffer from the inclusion of Bruce Wayne’s wang. It’s a solid Batman story that would have been worth checking out either way, but in the context of that scene, Bruce’s nudity and the reader’s understanding that he’s completely vulnerable actually adds to what’s happening.

It also isn’t at all a sexual moment. Bruce Wayne is a cisgender dude who has a penis. That’s it.

Art depicting human bodies in various states of undress ranging from scantily-clad to fully-nude is nothing new to comics, but apparently, when it comes to showing male bodies in the buff, we still have a ways to go.