If you’ve put any time into Assassin’s Creed Odyssey, you’ve probably encountered some aggressive wildlife. Lions, boars, and dogs roam the Greek landscape looking for blood. But you never expect a chicken attack.

You don’t want to piss off a chicken in Odyssey. They are small, aggressive, and they attack for seemingly no reason. Unlike a lion, which is an apex predator, a chicken is a tiny domesticated creature that has no business attacking well-armoured mercenaries. They will, though.

Odyssey players on the game’s Reddit page have spent the past few days commiserating over the brutality of the Greek chicken. Many players have offered their advice for dealing with chickens in a thread appropriately titled “What’s the chickens’ problem problem in Odyssey?”

User “FurLinedKettle” tells a harrowing tale of dying to their beaks:

I actually died to a gang of chickens. I was escaping from an encampment that was too high of a level for me and I couldn’t understand how I was still in combat. Then I saw the levels above all these chicken’s heads and I was so taken aback I only managed to parry one before the lot of them jumped me at once. A potential Greek hero was pecked to death in a fish market.

To be honest, I am impressed that you can parry a chicken in the game. 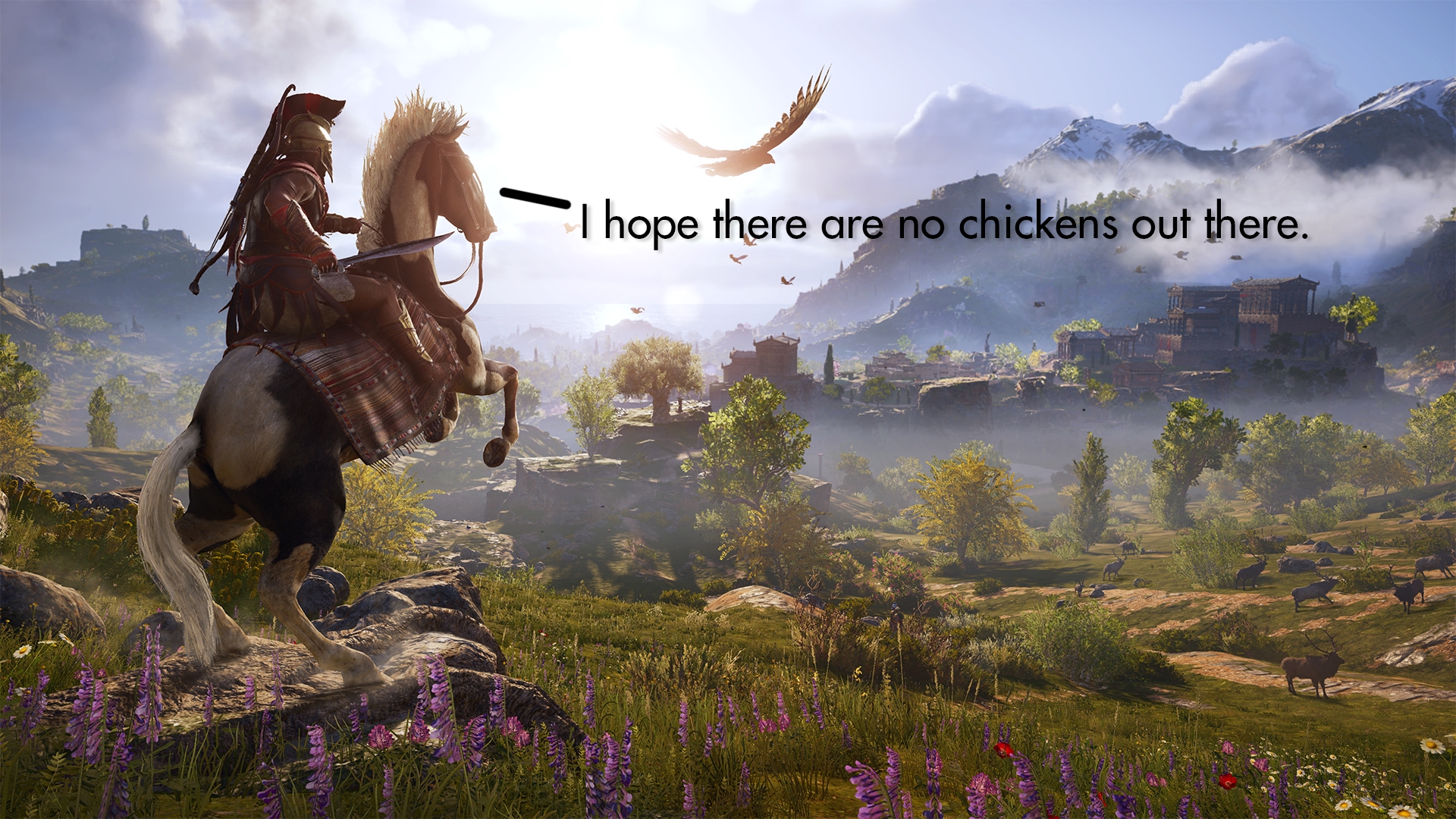 In another thread dedicated to chicken attacks, player “slicshuter” claims that a chicken might have been a part of a conspiratorial ambush due to a strange looting incident:

I got ambushed in a quest once and I swear to God one of the ambushers was a fucking chicken. It wasn’t doing anything until I arrived at the farm, then when the ambushers showed up, it started attacking me. After the fight – when the quest told me to loot the ambushers to get the note from their employer, I looted the chicken first and got the fucking note.

The cruelty of chickens in Odyssey cannot be overstated, but it does seem like the little feathered creatures can be underestimated. While a couple sword strikes tends to take them out of commission, it is a real problem to not take them seriously. As user “LilBibb” notes, “I got attacked by like 5 chickens for doing nothing and they brought me down to like half health.”

Many players in these chicken-related threads have noted that this could be a reference to the chicken attacks in the Zelda franchise.

In those games, if you harass a chicken, many chickens will come out of nowhere to truly begin destroying you with the fury of a thousand suns. We already know that there’s a Zelda easter egg in the game, so anything is possible.

While I was playing Assassin’s Creed Odyssey, I couldn’t help but think back to a certain Nintendo game.

It has also been suggested that since chickens were introduced to Greece by the Persians that there is a fundamental revenge mechanic at work. In this theory, floated in many Reddit threads, the chickens are basically Persian sleeper agents who have been waiting for years to fully complete the invasion of Greece. As this academic report on the history of the chicken confirms, the Greek playwright Aristophanes referred to chickens as “the Persian bird,” so there might be some truth to this theory.

Others have suggested that Odyssey is merely simulating the reality of roosters and chickens. Chickens are mean. They will attack you. It is a basic fact of chicken owning.

Not to go on a whole Tim Rogers story here, but my mother was once so viciously attacked by her own rooster that she had to fight it off with a shovel. It left massive gashes in her legs with its sharp talons. She might have done a little better with the Spear of Leonidas.

There might be some secret to the violence of chickens in Odyssey, or it might be the case that someone at Ubisoft is just all about realism when it comes to animal behaviour.