Assassin’s Creed Odyssey balloons the further you get into it, adding layers of complex systems from nation-conquest battles to mercenary bounties. These help give a sense of how fragile and war-torn Greece has become in the game’s storyline.

But a later system is more devious, and an important addition to the franchise as a whole. The ability to hunt down various cultists and conspirators around the world finally helps players feel like a genuine assassin.

A few hours into Odyssey, your character learns about the mysterious Cult of Kosmos, group of collaborators from around the Grecian world intent on manipulating the various factions of the Peloponnesian War to their advantage. This mostly means puppeteering each side of the conflict into extended war off of which they can profit.

The Cult of Kosmos seems to have their fingers in nearly every aspect of Grecian society, from high-level politics and military affairs to shadowy crime syndicates and mercenary groups.

And suddenly, Odyssey opens up a new tab with 44 cultists whose identities you can reveal, and who you can then assassinate. It’s a massive revelation: The cultists lurk throughout the entire game world, and you can set out on a bloody trail of vengeance against them.

It’s a departure from how assassination was previously handled within the series. Older titles built a roster of villains — most working for the shadowy Templar Order, with a few exceptions — and handled their deaths through story missions.

As the series expanded, time was given to understanding their motives, most notably in Assassin’s Creed 3 which gave players control over the Templar Haytham Kenway for the game’s first act.

Assassination was an event to build towards, with villains you often engaged with in near-misses and sabotaged plots.

It was a fair approach, but Odyssey’s helps sell something that previous games never really managed: This shit is hard work. Taking down cultists is a sort of grind, if an engaging one, where you locate clues to their identity before travelling, sometimes across the game world, to dispose of them. 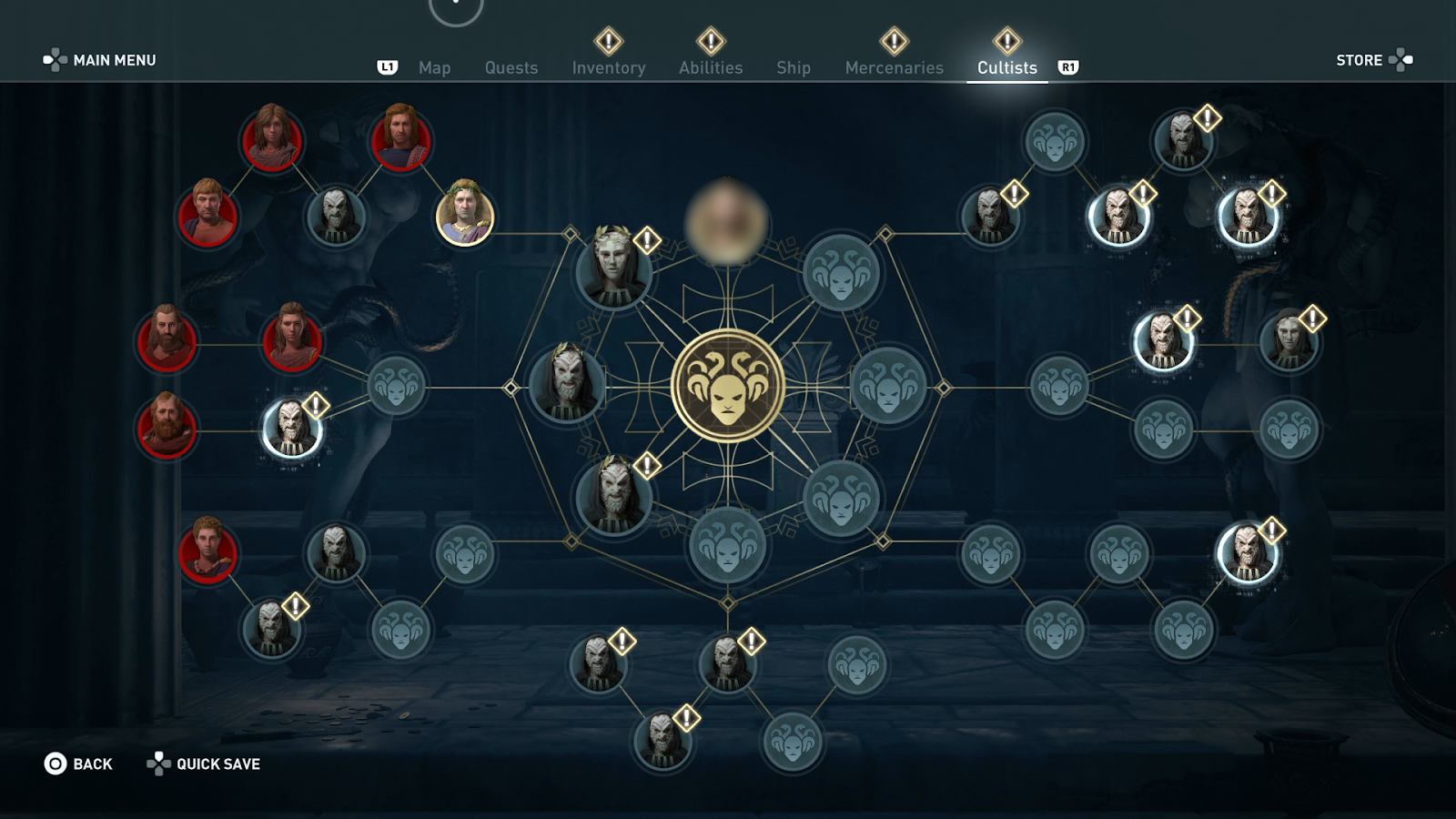 Of course, this being a new system, things can sometimes feel a bit ill-defined. The idea of a massive network of enemies spanning the game world is intoxicating, but players dedicated themselves towards dismantling that network will occasionally find themselves stymied.

My advice: If a clue to a cultist’s identity is “help people nearby”, this means that you should do some side quests and not, say, try to release prisoners at the mentioned locations.

The cultist system likes to provide roadblocks, but while that’s partially because it’s a new, finicky system, that experience feels true to the process. (I imagine.) These aren’t just dots on a map to slay; these are individuals that you need to draw out. You didn’t think it would be that simple to destroy a region-spanning conspiracy, did you?

The system’s great trick comes in the reveals of the leaders at the upper echelon of the cult’s hierarchy. While there is incentive to grind through smaller cabals in order to gain their unique legendary armour sets, the cultist system’s real draw is the chance to see who holds the strings of Grecian politics.

I won’t dare spoil these reveals, but suffice it to say that you will unmask cultists and be shocked to recognise some of them. In a few particular cases, I felt genuinely betrayed.

There had been betrayals and turnarounds in the series before — players control one such turncoat in Assassin’s Creed: Rogue — but there’s something genuinely crushing about slogging your way through bodies and uncovering a mastermind only to see a familiar face. A simple button press exposes the truth, and in some cases can re-contextualise massive portions of the game. 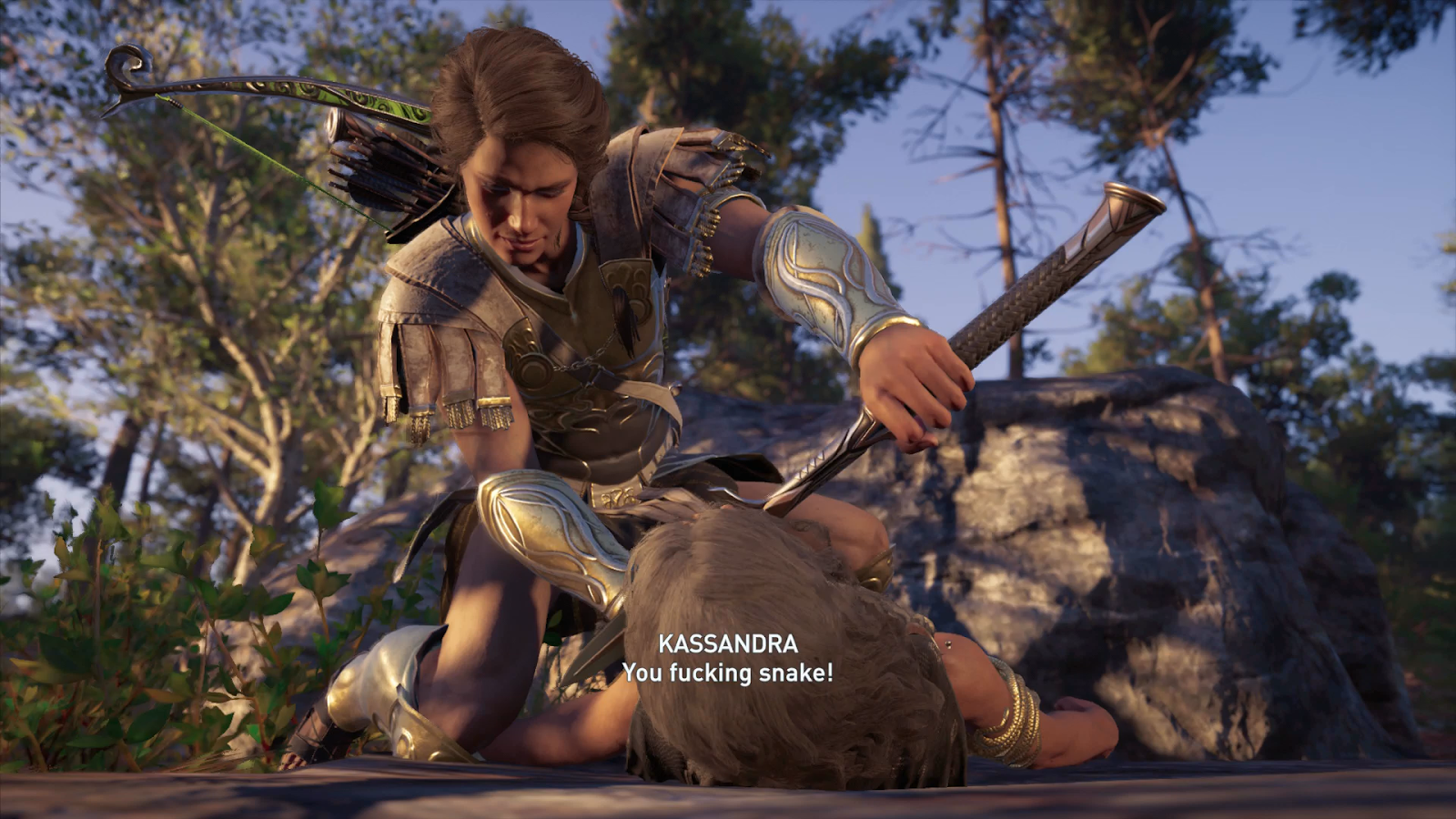 It is through this mixture of lengthy labour and occasionally shocking feelings of betrayal that Assassin’s Creed Odyssey has managed to systemise how gruelling and rough an assassin’s life is. And while the character I’m playing, Kassandra, professes no creed, she and the player live out that life with all of the draining work and climactic blood.

Assassin’s Creed has managed these things before in its narratives: The anguish of Assassin’s Creed 3’s Connor as he learns his Colonial compatriots were responsible for the displacement of his people, Edward Kenway’s despair in Black Flag as he watches his Assassin allies and pirate brethren die one by one.

But these games never captured the exhausting process of assassination. The journey to dismantle the Cult of Kosmos is one of Odyssey’s key narrative pillars and the cultist system is essential to painting a picture of the shadowy precursor conflicts that gave way to the Assassins and Templar.

It’s hard and, save for some nice loot sets, thankless. But someone’s gotta do it.