As a 30-something woman who grew up with The Craft, Charmed, and (of course) Sabrina the Teenage Witch, Netflix’s Chilling Adventures of Sabrina feels like being a teen witch again.

Only this time, it’s not superhero costumes, it’s a dark exploration of Satanic worship and the horrors of the patriarchy. The show isn’t perfect and has problems it may never outgrow, but it is a helluva ride. Hail Satan!

Chilling Adventures of Sabrina, created by Riverdale showrunner Roberto Aguirre-Sacasa, stars Kiernan Shipka (The Legend of Korra, Mad Men) as Sabrina, a teenager on the verge of her 16th birthday. But she’s half-witch, so her family’s idea of a “Sweet 16” is Sabrina signing over her soul to Satan and eschewing her mortal life in favour of a magical one.

Sabrina’s not down with that and rejects the deal, fighting for her right to live in both worlds. Her refusal to cower to the demands of Father Blackwood (Richard Coyle) sends her and her loved ones down a path they may never come back from.

I had the chance to check out the first eight episodes of Sabrina’s 10-episode season, so I know the main storyline but not how it ends. What I am intimately familiar with is the world of Sabrina, and it is breathtaking. The sets are dripping with detail, the costumes are stylish and sophisticated, and the series doesn’t shy away from embracing the darkest elements of its storyline. You know, the whole “we worship the devil” thing.

I will admit, I was afraid they weren’t going to “go there.” In the first episode, they kept saying “Dark Lord,” making me think they were blanketing over that part so they wouldn’t offend some religious groups.

But this isn’t a Golden Compass situation, where organised religion was replaced with generic totalitarianism to appease a certain demographic. These witches worship Satan. And holy hell is he terrifying. 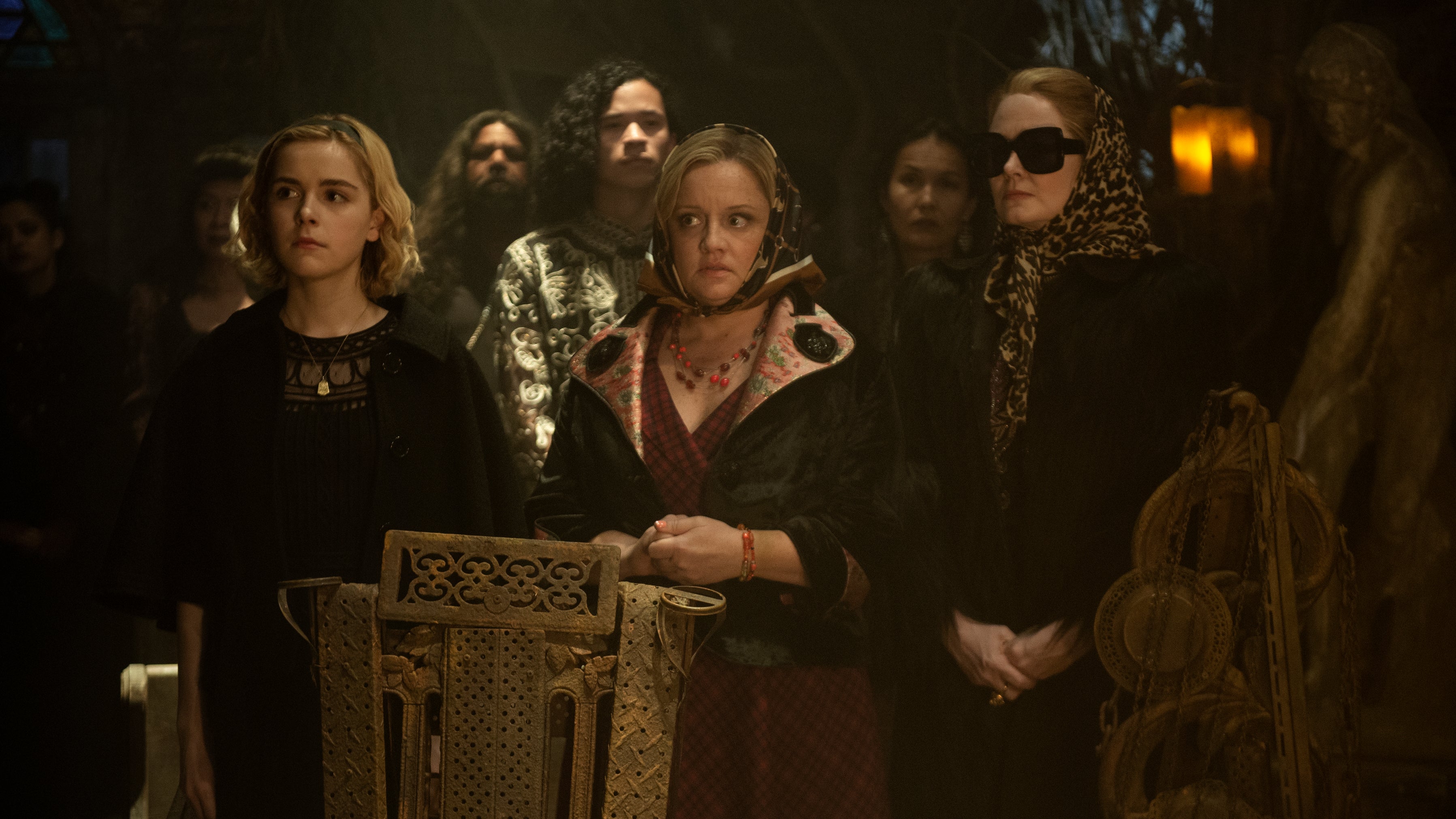 Sabrina and her aunts at the Church of Night. (Photo: Diyah Pera, Netflix)

As with any adaptation, there are some major and minor changes from the source material, in this case, the Archie Comics series. Some of these are good choices, while others hold it back from how good the show could be. There are occasional moments of full-on gore and body horror, but for the most part, the show has toned down the comic’s violence and depravity.

This is unsurprising but unfortunate, as it makes the show feel like it’s having an identity crisis. Sabrina mostly acts like a creepier Riverdale, but then you get occasional scenes that are incredibly grotesque and certainly inappropriate for underage viewers. It’s sometimes hard to figure out what audience the show is aiming for.

However, many of the other changes are actually for the better. The show isn’t a 1960s period piece anymore, but rather period-adjacent, taking place in that Riverdale void between modern and timeless. This might alienate some people who were excited for a period drama, but I think it was a smart choice, as it lets the series dive into modern socio-political issues, which I’ll get to in a bit. It also leaves the door open for a possible Riverdale crossover (I’m still praying to the Dark Lord for that).

The biggest improvement was how they fixed Sabrina’s initial conflict. In the comic book, Sabrina was mainly hesitant about becoming a witch because she didn’t want to lose her boyfriend, Harvey (who was also pressuring her to have sex with him, but that’s another story).

In the series, Harvey is part of her motivation, but by no means her sole drive to stay in the mortal world. She also wants to support her friends and start a women’s group at school. This goes hand-in-hand with the big conflict in the witching world, involving the Church of Night and its sexist, patriarchal structure. 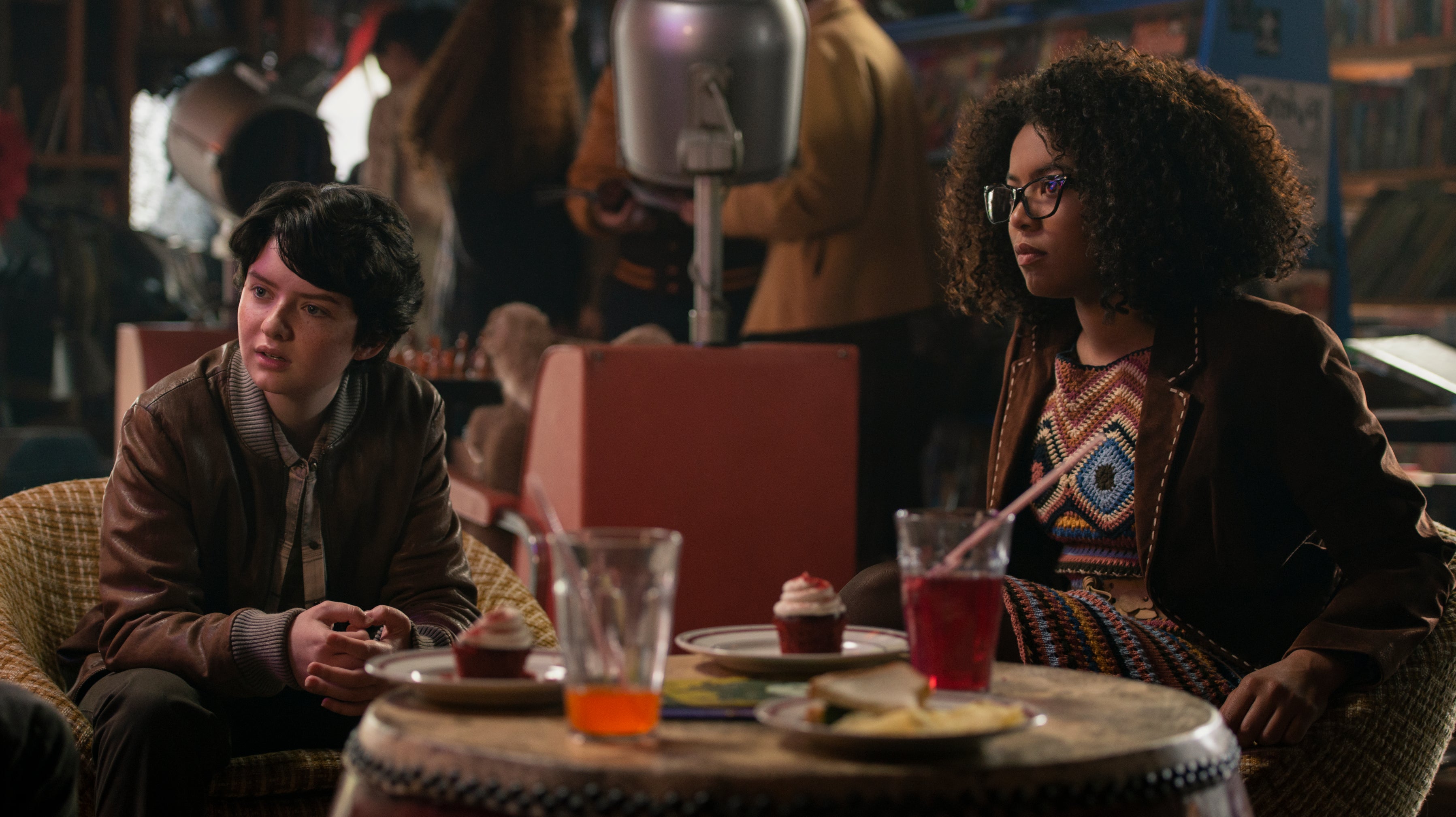 One of Sabrina’s bigger desires is to help her friend Susie (Lachlan Watson), who’s being bullied for not conforming to gender norms. Susie’s personal journey is a major part of the season, and Watson, a non-binary actor, does a fantastic job with a complex, demanding role. Their performance is one of my favourites of the series so far. Sadly, the same cannot be said for Shipka as Sabrina Spellman.

I don’t think she’s bad, she’s just fulfilling what the role needs her to be. Shipka is great when Sabrina is calm and confident—but when Sabrina’s back is against the wall and she has to fight back, Shipka has a tendency to over-enunciate her words, making them feel unnatural.

She also blends in with the rest of the cast when she’s supposed to stand out. In the original Sabrina the Teenage Witch, Melissa Joan Hart knew how to grab your attention. It was an ensemble show, for sure, but you could always tell Hart was the center of that universe. It’s not the same here. Shipka doesn’t pull focus, at least not in the way the show needs.

Given how Shipka often blends with the crowd, it’s a good thing that crowd is, for the most part, really solid. Miranda Otto and Lucy Davis are dazzling as Sabrina’s aunts, Zelda and Hilda. The roles are already great on the page, with Zelda playing the questioning zealot and Hilda being the heart of the team. But Otto and Davis aren’t satisfied with just playing these sisters, they become them.

Michelle Gomez and Coyle are clearly having the time of their lives as Madam Satan and Father Blackwood, two roles oozing with demonic cheese. And I respect Chance Perdomo’s interpretation of Sabrina’s home-bound cousin, Ambrose. It’s a part that could easily be half-assed since he doesn’t get to do much, but Perdomo clearly cares about the character he’s playing, and it comes across on screen. 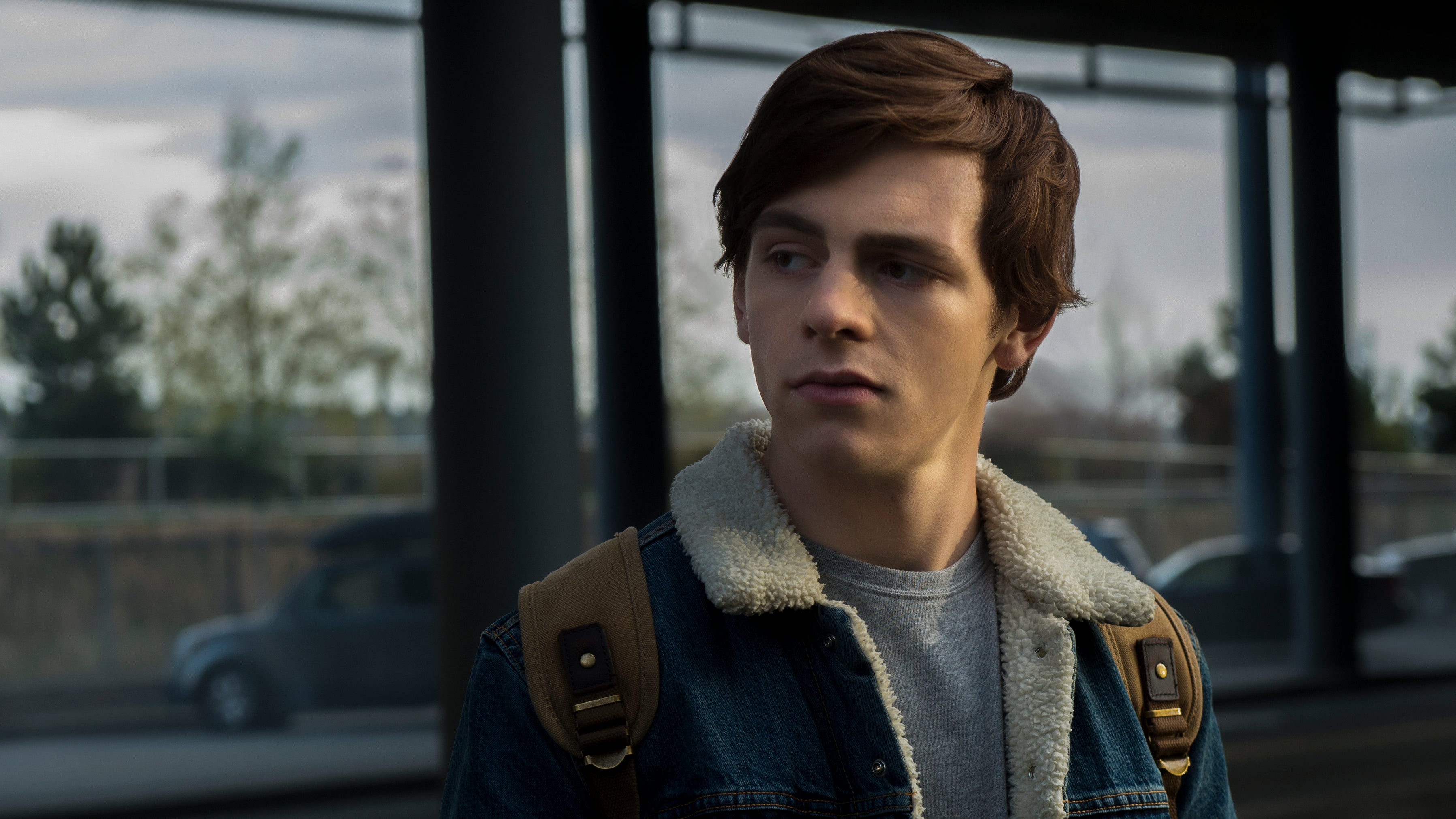 How did you get to be so interesting, Harvey Kinkle (Ross Lynch)? (Photo: Diyah Pera, Netflix)

Strangely, the character I found myself the most surprised by was Harvey, played by Ross Lynch. At first, he was pretty much a walking drool, creating emo comics in his room while complaining that Sabrina wasn’t spending enough time with him. As the season went on and Harvey got his own storyline, independent of Sabrina, we really saw the character and actor come to life (he has a full-blown panic attack at one point, and it tightened my chest).

The same goes for Sabrina’s other friends. It takes a few episodes for Susie, Rosalind (Jaz Sinclair), and Weird Sisters’ leader Prudence (Tati Gabrielle) to find their place, and I was pleased with how their own journeys intertwined with Sabrina’s in ways I didn’t expect.

The same can’t be said for Sabrina’s other beau, Nicholas (Gavin Leatherwood), who waffles around doing whatever the plot needs him to. He’s impossible to figure out—not because he’s complex, but because the show hasn’t figured out what kind of person it wants him to be. Nicholas collides head-first with one of the biggest issues on the show: Sabrina’s confusing, and sometimes problematic, take on human sexuality.

On some occasions, Sabrina does its due diligence when handling issues of identity and sexuality, like with Susie’s storyline. Other times, it comes across as regressive. There’s a scene in the first episode where Sabrina and the Weird Sisters cast a spell on some jocks who were bullying Susie. They magically coax the four young men to strip down and make out with each other, so Sabrina can take photos and blackmail them.

It was a problem that could’ve been handled any number of ways, and yet they went with the old “gay panic” trope.

For a show that’s supposedly about sexually liberated witches and warlocks—Nicholas openly tells Sabrina he’s willing to share her with Harvey – it did make peculiar choices I did not care for. 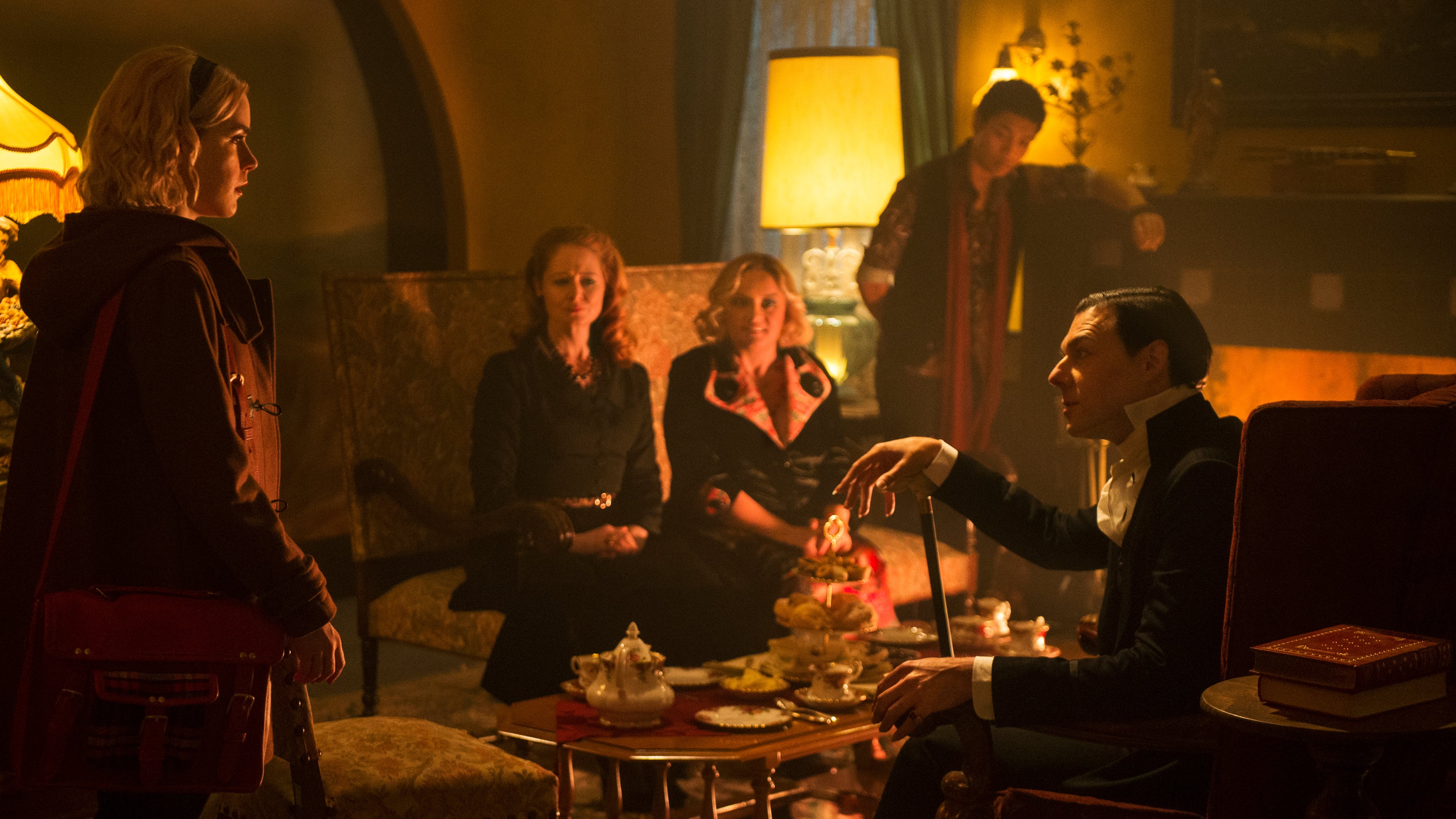 Even with the downsides, I do feel Sabrina is an overall success. It wasn’t the best debut season I’ve ever seen, but that’s not really a bad thing. I do feel there’s been an unfair burden of expectation on this show, from myself included. This is a series that carries the weight of a beloved comic book character and a TV show with a lot of nostalgia attached, with pressure to be the best of both worlds – kind of like Sabrina herself.

While it doesn’t always rise to the challenge, it still does enough to make the trip worthwhile.

There aren’t a lot of shows out there where your stars eat corpses, sacrifice goats, and worship the devil. If you’re like me and that’s your cup of witch’s brew, then drink up.