For Honor’s New Update Is Full Of Surprisingly Cool Ideas

For Honor’s Marching Fire update went live this week. While some of the changes it brings can be quite granular, when taken as whole it offers a substantial refresh of Ubisoft’s 20-month-old medieval brawler. For those willing to pay, there are four new fighters. For everyone else, there’s an overhaul of the game’s graphics, as well as the introduction of its best competitive mode yet.

For Honor originally released in February of 2017, but it’s never been as good as it is today. Months of thoughtful balance patches, a steady flow of new characters, and the occasional addition of entirely new modes have improved the overall package from what originally launched.

For Honor was already good then, and though it’s still not perfect, it’s easier to recommend than ever. While I’d love to simply wax poetic about my favourite new Wu Lin warrior and share a few anecdotes from the most recent battlefields I’ve killed and been killed on, there’s too much in the new update not to break it down piece by piece.

What you need to pay for (and everything you don’t)

The $US30 ($42) Marching Fire expansion gets you access to the game’s new Wu Lin faction, which includes four new heroes. On October 30, players who didn’t buy the expansion can spend in-game currency (15,000 steel, or about $US15 ($21)) to unlock the faction. 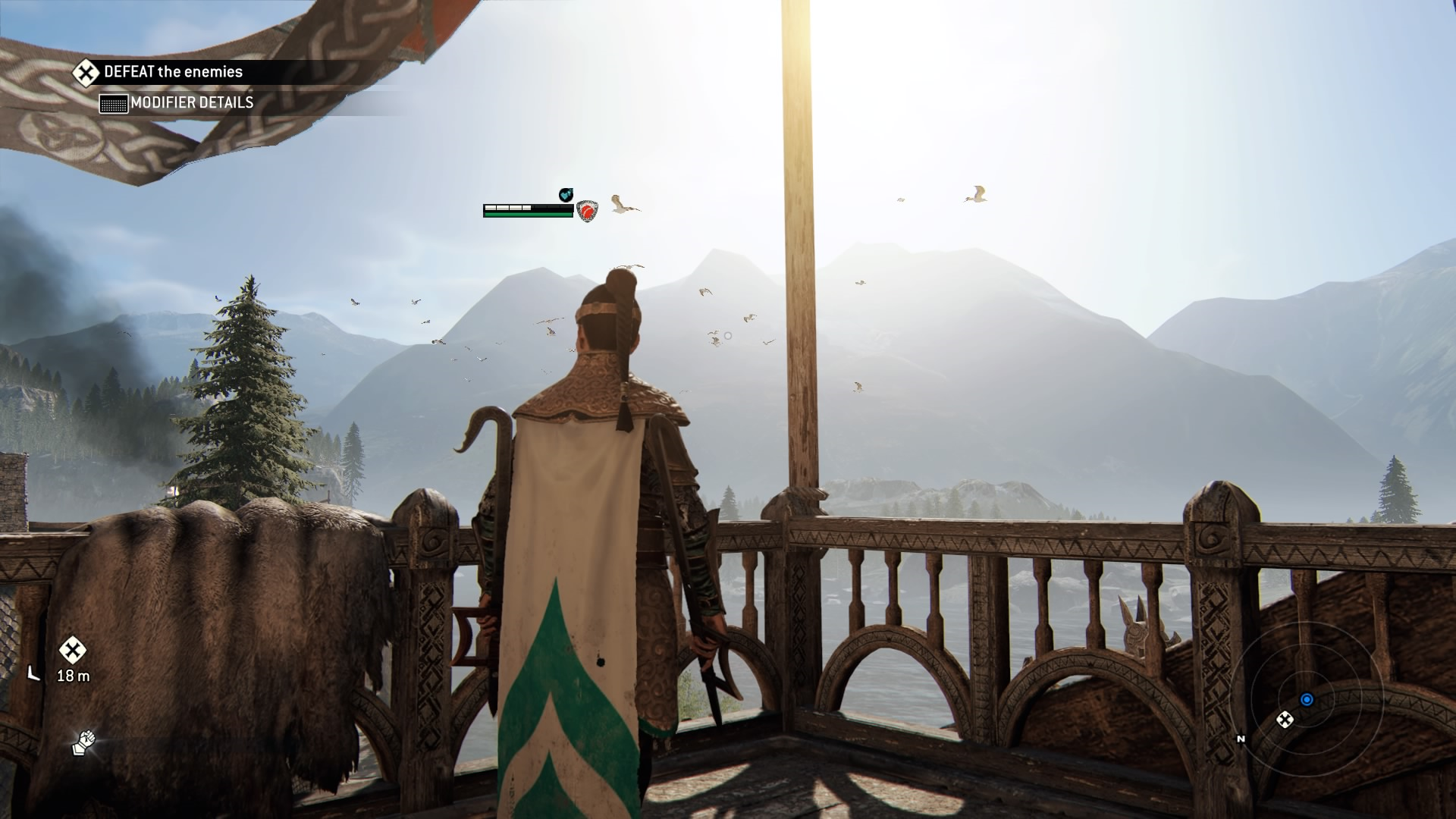 Marching Fire also includes a new Arcade mode, which is basically a way to grind against computer opponents in quick succession for experience and loot. If you’ve ever played the arcade mode in a fighting game, it follows a similar structure. The only way to unlock this mode is to buy the expansion.

All of the other changes to the game in this latest update are free and open to everyone, whether they buy Marching Fire or not. That includes Breach mode, the game’s best new addition, changes to the character customisation system, and other new tweaks.

Whether you decide to buy the DLC or not, anyone returning to For Honor or playing it for the first time this week is getting access to a much-improved game.

A new faction’s been added

The Wu Lin are warriors who hail from medieval China. There are four in total—a vanguard called Tiandi, an assassin called Nuxia, a heavy called Jiang Jun, and a hybrid called Shaolin. In keeping with the game’s evolution, they hew less closely to standard archetypes.

Tiandi, for instance, is a large and somewhat slow fighter who nevertheless has a couple of fast attacks and dodges. Jiang Jun is in a similar boat, wielding a spear with surprising speed compared to some of the other fighters in the heavy class. 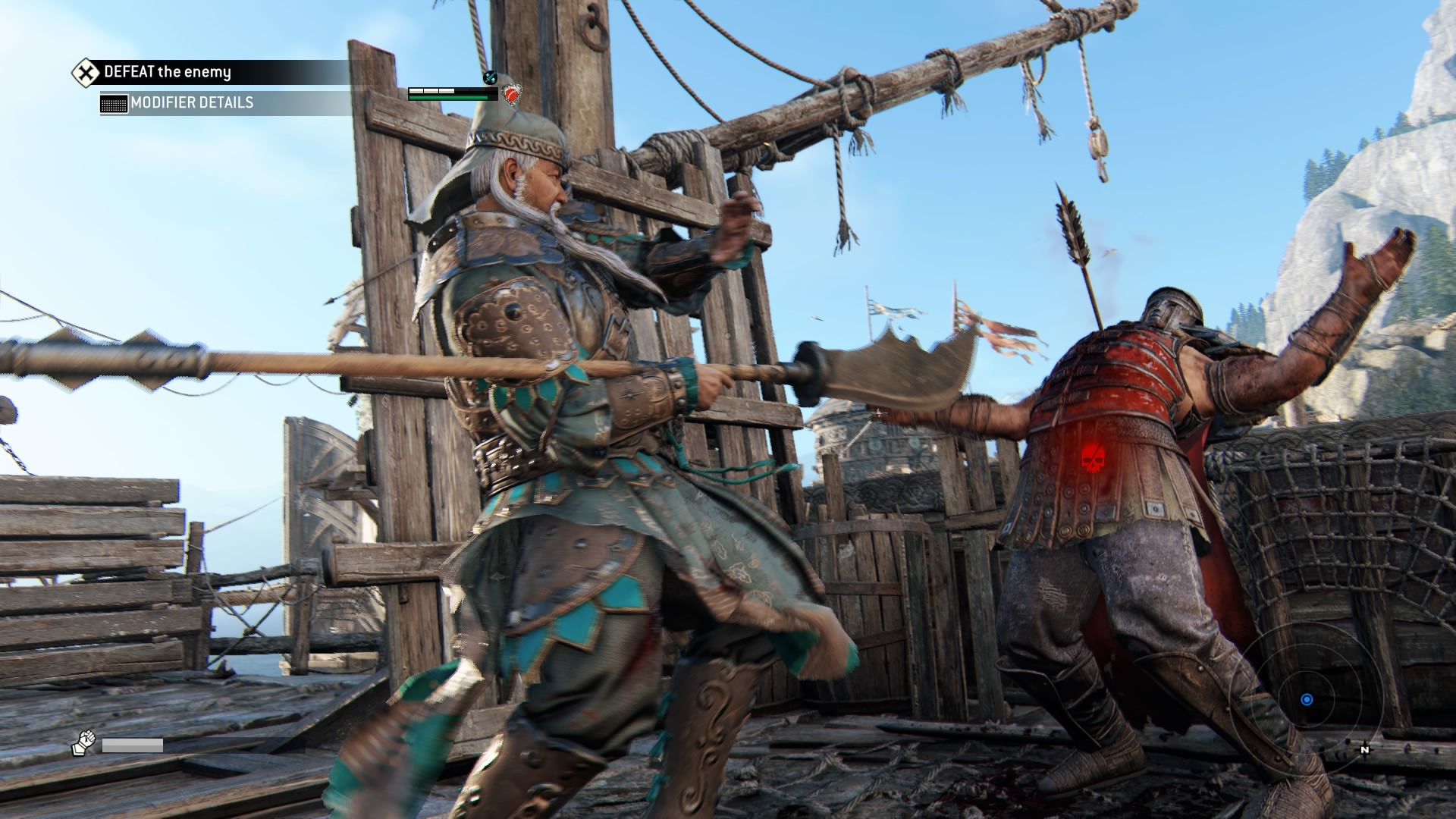 From what I’ve played so far, though, Shaolin is by far my favourite. He’s a monk who fights with a wooden staff and can shift in and out of stances between attacks. Which stance he’s in will affect the speed and direction of his next attack, making it possible to chain together flurries of bashes that can be as confusing to defend against as they are difficult to pull off.

He’s a good example of how the game’s growing cast continues to build it out in new directions rather than just reskin existing archetypes. While I’ve been less impressed with some of the individual Wu Lin fighters compared to the best of past expansions like the Gladiator and Shaman, overall I they’re a more diverse and balanced package than ones in past DLCs.

You can siege castles now

The game’s other major new addition is Breach mode, which in my opinion is the best thing Ubisoft has ever put in the game. One side tries to break into a castle and kill the commander inside, while the other side tries to fight them off.

The offensive team has a battering ram they must protect as it breaks down the two gates standing between them and the enemy commander’s throne room. The defensive team tries to either destroy the ram, kill the enemy team a certain number of times, or run out a 30-minute clock. 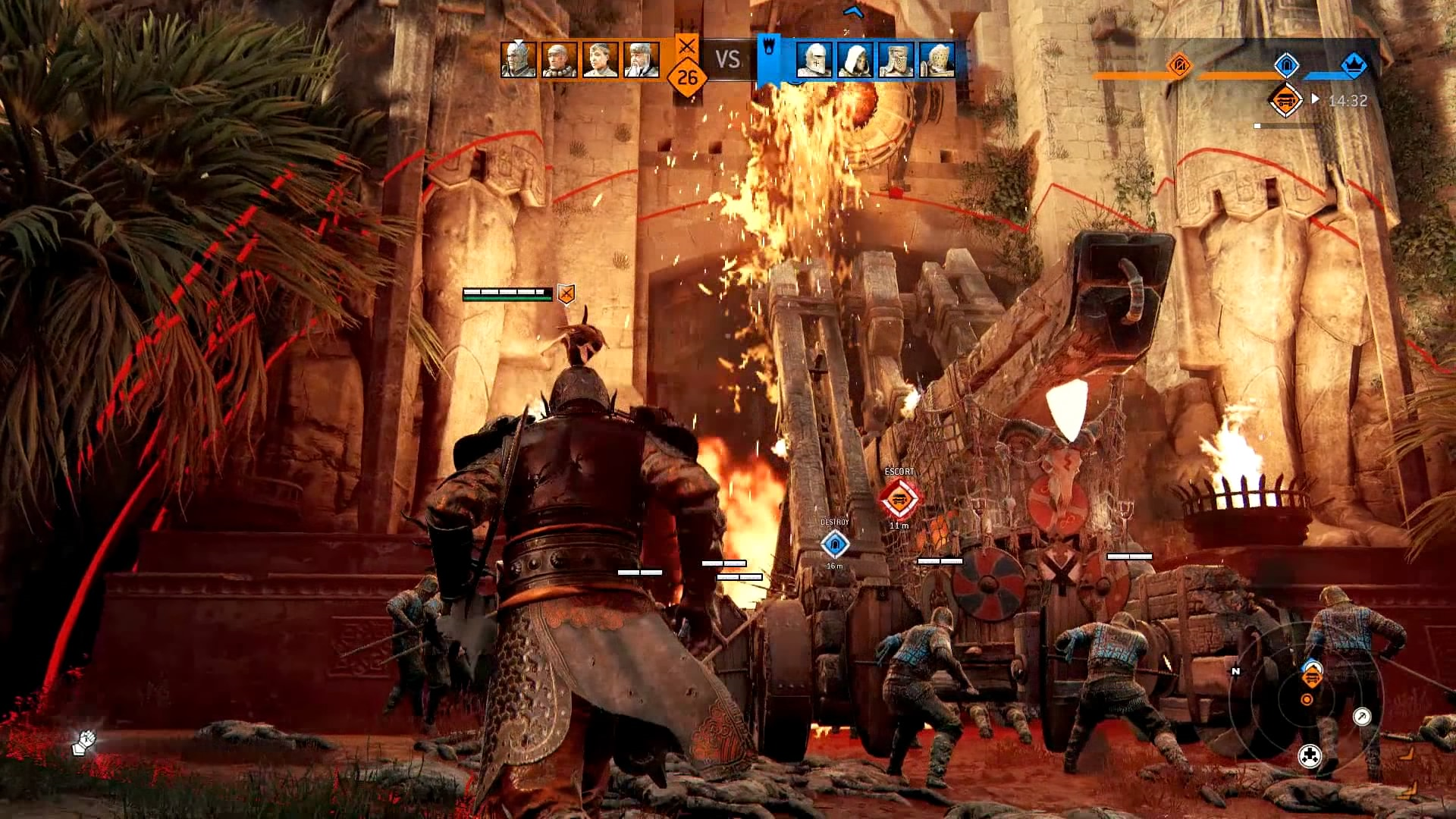 While the main objective, depending on which side you’re on, is to push forward or repel the attack at all times, there are secondary objectives as well that can be crucial to winning. Walls on either side of the main fighting area can be taken control of and armed with archers who will fire down at opponents.

There’s even a neutral mini-boss off to the side of the map who can be defeated for a major power buff to whichever team does so. He’s extremely tough though, and in a four vs. four match having even one ally dead and waiting to respawn means being at a severe disadvantage.

There are three different maps so far for the mode. While I don’t yet have a favourite, each does a good job of feeling chaotic but still manageable, unlike some other maps in other modes where things frequently descend into maddening free-for-alls. Part of what makes Breach so good is the way it funnels two teams toward one another and creates consequences for retreating that make positioning and map awareness keys to being successful.

While For Honor has always been good at recreating the fantasy and tension of moment-to-moment medieval combat, Breach convincingly stretches it to encompass a larger battle. Breach is the first time I’ve wanted to set up a dedicated night to play For Honor as a casual player with friends over voice chat, like I do with my favourite MOBAs and online shooters.

Arcade mode is great for grinding

While it’s fun to go head-to-head with other players online, it’s nice to have a refuge from getting your arse kicked every once in a while. Arcade mode is my new favourite place to escape to.

It’s a nice halfway point between playing online matches against AI opponents and doing tutorials in training mode. You can still grind for experience points and new character loot while also working on mastering a particular character or new strategy. Screenshot: For Honor, For Honor

There are several different difficulties you can play on. The higher the difficulty, the higher the recommended equipment level of your characters, and the higher the likelihood of getting rarer loot. Each run through the mode consists of five battles, each with special modifiers for you and the opponent.

Sometimes you or they might have certain buffs to specific types of attacks. Other times, one or both of you might be on fire. Occasionally you’ll have two opponents in a particular fight instead of just one, or have to fight while being shot at by archers.

The difficulty curve, at least in the first half, seemed approachable enough, and the pace of fights made it feel like an efficient alternative to queuing in multiplayer when it came to trying to upgrade my character.

That said, Arcade mode is only available as part of the paid DLC, and while it’s a nice bonus if you want to pay to unlock the new Wu Lin faction, I don’t think it’s necessary to have in its own right. It doesn’t feel as sufficiently built out as it could be, with more diverse sorts of challenges.

Marching Fire completely changes how gear works in the game. Whereas before, individual stuff like chest plates and sword hilts had their own unique stats contributing to offence or defence, they now come with individual perks like, say, a 20 per cent bonus to melee damage.

Each piece of gear will have a certain point value attached to it in addition to these perks, and 600 total points will be needed to activate a perk. That means that out of the seven perks each hero can access, only two or three can be used at a time. 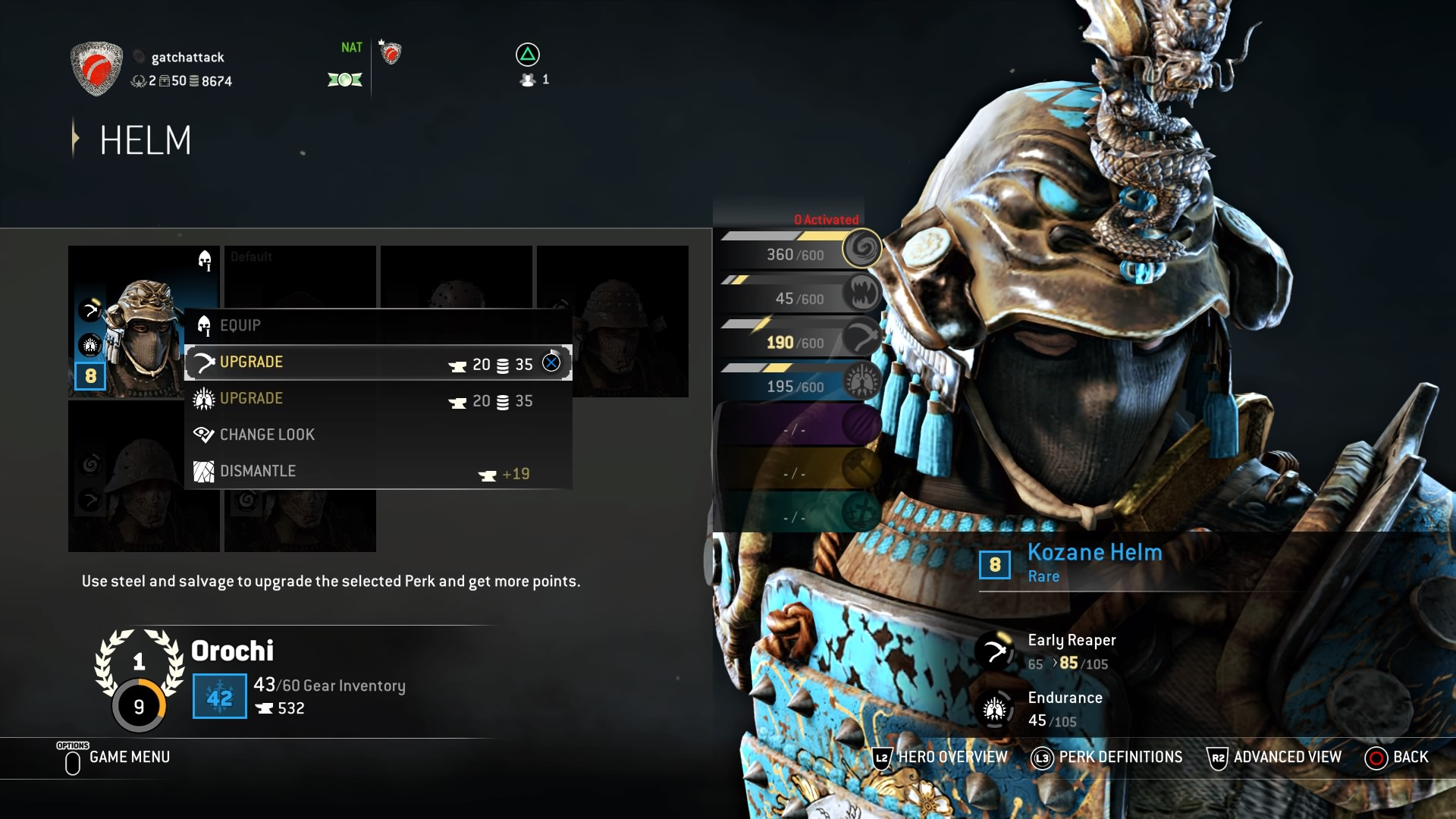 For Honor’s developer has said that a big goal of this new system was to make the relationship between individual pieces of gear, and their effect on a character wearing them, more transparent.

Based on the short amount I’ve been able to tinker with the overhauled gear system, I think it has accomplished that. It still makes for an incredibly complex and sprawling system, however. While at first blush it feels better, I’m still not certain whether it’s actually good yet.

Everything looks a little prettier

For Honor has always been surprisingly pretty for an online multiplayer game in my opinion, but now it looks much better.

According to the developers, the game’s lighting system has been improved to make for better contrasts and more realistic effects, while the textures on everything from characters’ armour to cobblestones have apparently also been made more detailed and varied. While I haven’t done shot-for-shot comparisons between the rocks in the game when it launched and the ones in it now, I will say the game feels more crisp overall. Especially on maps where it’s dark or raining, everything’s much easier to read and take in now, even down to and including the spurts of blood when people are getting dismembered.

There are a ton of other tweaks, changes, and small additions as well—too many to discuss here. Ubisoft has detailed all of them in the patch notes. While the For Honor community will no doubt be divided on some of them, the sheer scope of everything that’s been re-examined is impressive and laudable, especially given how long For Honor’s been around now and the fact that it never broke out in the way some other recent multiplayer games have.

It’s never going to have a rebirth in quite the same way Ubisoft’s Rainbow Six Siege did, but it’s nice to see one of this generation’s most unique games keep growing.