Sometimes, I wish I could spend just a little time in the historical days of England. I’m not a huge fan of plagues, bread shortages, and the feudal system, but I do like courtly love—the chivalrous, disciplined romantic overtures that drove noble women wild with passion, lust, and the mystery of what came after all the handkerchief-waving and duels for their honour.

Was it sexist? Oh boy, you bet. But anyone who’s ever read the story of Lancelot and Guenevere knows that there’s nothing hotter than the slow-burning coals of love in the medieval age. 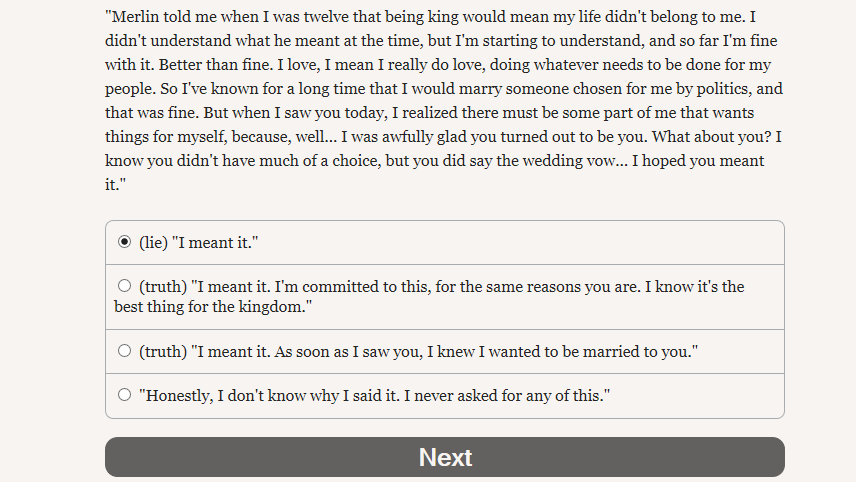 It’s Lancelot and Guenevere’s forbidden love that’s the subject of the simply titled Guenevere, a text-based choose-your-own-adventure by writer Jean Townsend. It’s a work-in-progress, so only one and a half of the planned seven books are currently playable, but that’s more than enough to begin exploring the tempestuous luststorm at the heart of King Arthur’s court.

The story begins with young Guenevere on her way to marry King Arthur, a man she’s never met, for the sake of political gain; her father’s armies in her home county of Cornwall will bolster that of the King’s.

Along the way, you make decisions that inform your personality and statistics, which you can check at any time. I decided to roleplay as a sort of dark magic-wielding sorceress Queen, with a talent for anything political and tactical, and—since this is an article about sex—a lusty streak wider than a mile. 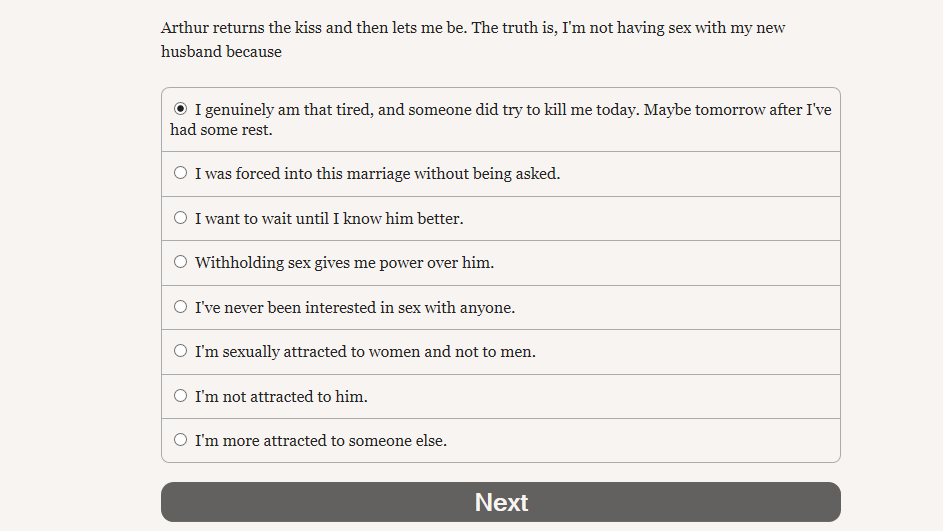 I began cautiously. Guenevere gives you an impressive array of options, meaning that when Arthur and I found ourselves in the bedroom on our wedding night, I didn’t just have the choice of “jump into the sack” and “turn him down.”

Instead, I was offered the possibility of telling him yes or no, but with the nuances of not being interested in men, not being attracted to him, wanting to use him for political power, or wanting to ravage one of his other courtiers. These choices come back later on, especially if you roleplay as a completely asexual Guen – the only game I’ve ever seen that has asexuality as an option! – or if you go against your word.

Eventually, I couldn’t help myself: The spark between myself and sexy Sir Lancelot had grown into a hot, burning fire, and we got down and dirty in the forest after my escape from being kidnapped.

There’s a lot going on in the game, politically and militarily, which I attempted to navigate with grace and intelligence, but my reason was selfish: I just wanted to make sure that I made it back to Lancelot alive. Can’t bone down if you’re just bones.

The Lancelot/Guenevere romance is almost certain, of course—according to the history and legends, they were caught in flagrante and sent away. But you don’t have to pursue it. There is one unavoidable kiss. You can lean into it, stop it, or react violently, and Lancelot will remember your choice.

I didn’t mind the kiss, of course, because I leaned right into it, but at the end of Book II, there is a little Q&A from the author. Evidently expecting some players to be bothered by the non-consensual kisses from both Lancelot and Arthur, she writes: “If he kissed a Guen who didn’t want to be kissed … he will never really forgive himself for the entire rest of the series.”

She also states that the kiss is the only concession to the “traditional” Guenevere/Lancelot romance, and that it won’t happen again. 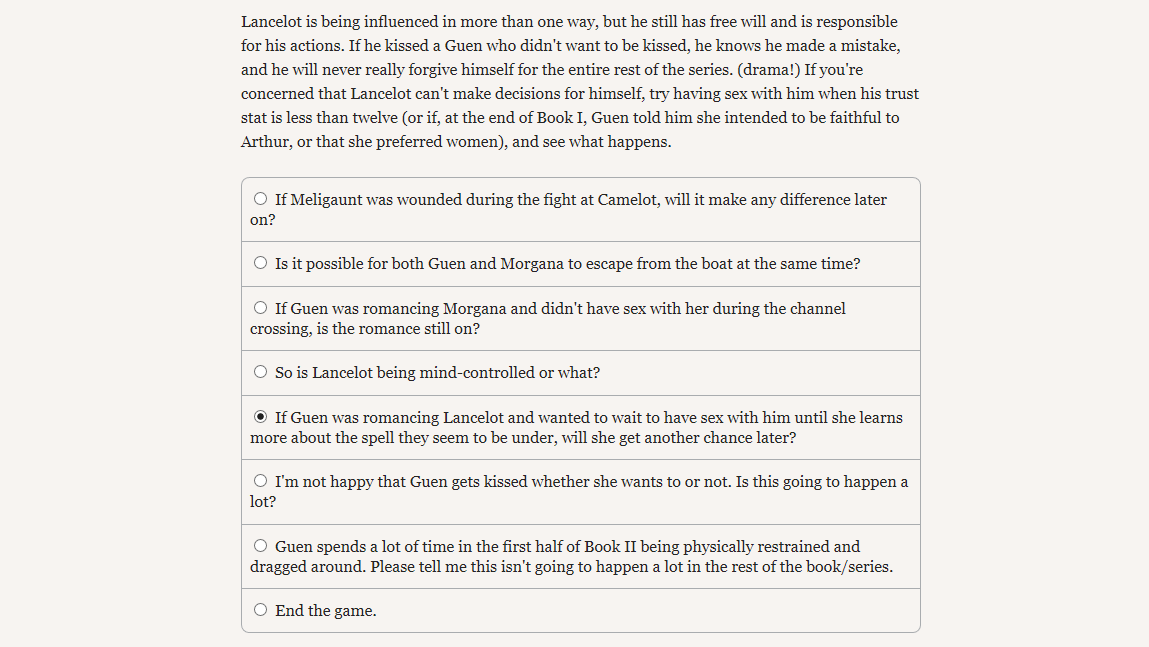 It’s interesting to play a game that is so thorough and thoughtful in its options, and one that considers the feelings of those playing it beyond just wanting to tell a story.

It’s something that might be called “ethical narrative design,” one that takes into account not only the personality, but also the sexuality of those playing, and lets them roleplay as, basically, themselves, albeit a medieval Queen version of themselves.

Guenevere might take a while to be released in its entirety, but I’m looking forward to seeing how far my manipulative sexpot Queen can get, just as much as I’m curious about how a Guen who’s entirely uninterested in sex, or Arthur, or men, gets on in the world of Arthur’s Round Table.