It’s tough being a ship captain in Assassin’s Creed Odyssey. Naval combat is one of the game’s trickier aspects and while it’s always going to be tough, these tips should help you deal with any blockades or pirates you come across.

Ship battles are about outlasting the enemy, so upgrade your hull as much as you can to survive longer and equip more lieutenants. From there, feel free to upgrade your main arsenal of arrows and javelins.

You don’t need to pour materials into upgrading your fire brazier to maximum level, but you should have one as soon as you get the option. Fire arrows will supplement your main damage, padding out your attacks with some damage over time that eats away at enemy ships before your next big attack. 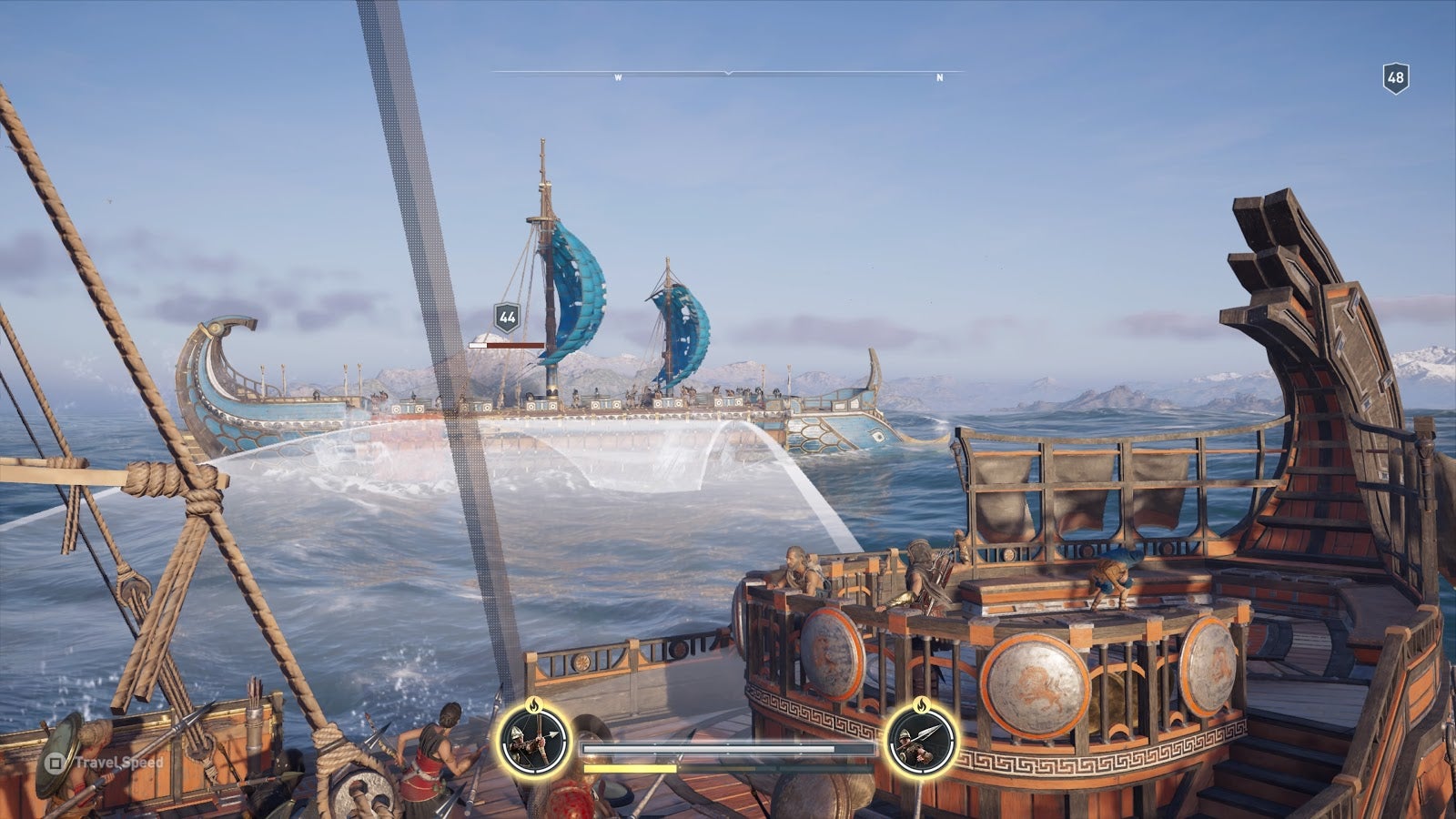 Your abilities are on a cooldown, which means that you can’t just spam the same attack over and over. Try to alternate between your arrows and spears instead of blowing through everything too quickly. Sustained damage wins naval battles more than big, bursty volleys. Be mindful of your cooldowns and you’ll always be tossing out damage.

Unless you’re moving to ram the enemy, it’s OK to keep your distance. If you hold down the aim button for arrows or the attack button for javelins, you’ll be able to throw them a little further than if you just tapped the button.

The goal is to survive until you can board, so keep a fair distance and wear your enemy down. The extra space will make it easier to escape as well, if things take a turn for the worse.

It takes a simple button press to brace and mitigate damage from enemy attacks, so you might as well do it. You should only risk taking damage if you know you’re about to take an enemy down. Otherwise, play it safe. There are no cool loot rewards for dying.

If you see a glowing section on your enemy’s ship, that’s a weak point. Aim your best weapon at that location and you’ll do extra damage. You can reveal these points more quickly by ramming opponents or using fire arrows. 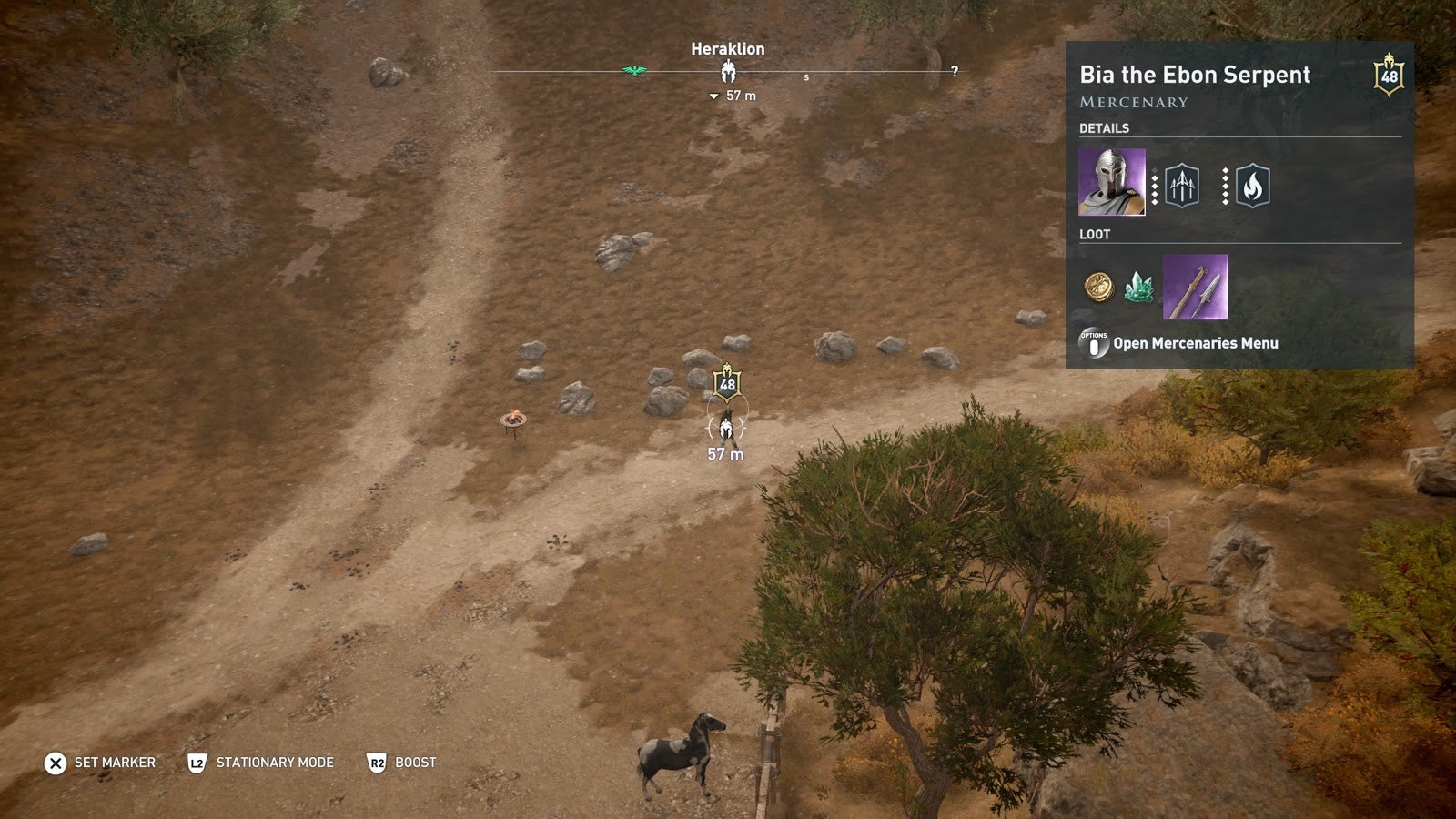 Only Recruit The Best Lieutenants

One thing that most captains neglect is how frequently they should be recruiting new lieutenants for their ships. Any enemy that you knock out can be recruited. You could grab any hapless soldier from a fort if you really wanted, but you really should try to be more discerning.

Summon Ikaros and hover your reticule over tougher enemies such as polemarchs and captains to see their rarity. This makes it easier to find Legendary (purple) or even Epic (gold) NPCs. You can even recruit any of the mercenaries wandering the world if you knock them out. Scout their levels and keep recruiting throughout the game. You won’t regret it.

Use Lieutenants That Boost Your Best Weapons

Once you have a large stable of recruits, it’s time to get discerning. Examine their traits closely for bonuses that synergise well with your ship’s loadout. Extra fire arrow damage might sound good but it’s wasted if you only have the starting fire brazier. But if you have a really good ram, taking an lieutenant who can boost your ramming stats will help your play to your strengths.

So long as you have a solid hull for protection, lieutenants give you a chance to customise your play-style on the high seas. Having an all-around great crew is nice, but specialising in your best tool is even better. 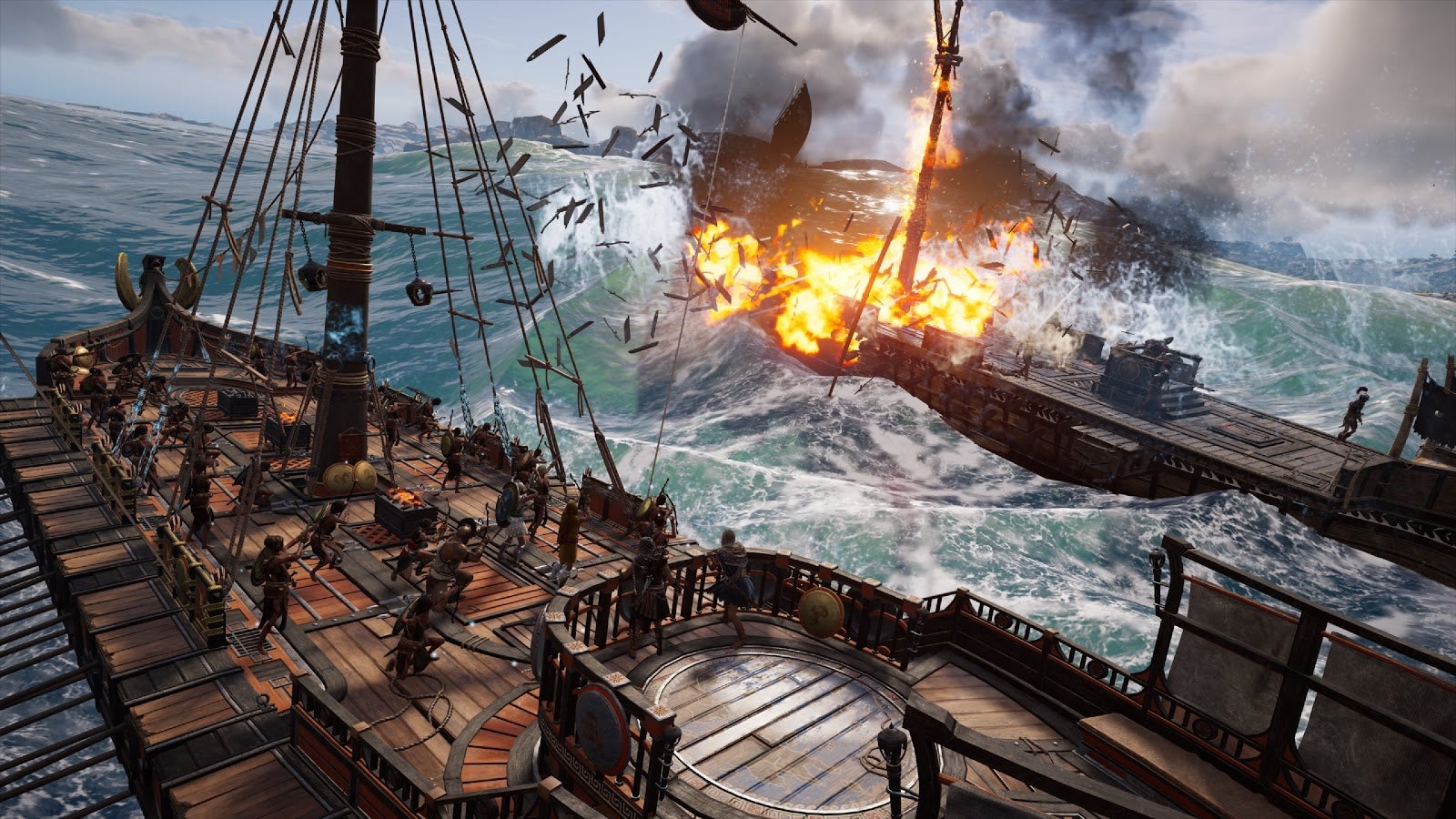 Go For The Easy Kill

Every time you board a ship and take out its crew, you’ll restore your own ship’s health. Weaken the easiest enemies and withstand their attacks and then take them out when they’re vulnerable. If they’re hanging out with other ships, try to draw them away so you can take them out one at a time. It’ll make fights against blockades easier and give you the health you need to take on larger ships.

You can see enemies much sooner than they perceive you. Use that as a chance to open up with a ramming attack or sustained volley to do big damage and start with an advantage.

Did You Know You Can Just Swim Over There?

If a tough ship has you down and you’re feeling really confident in your melee combat skills, leap off your ship before you are detected and simply swim over to the enemy vessel. Climb aboard and if you can handle the crew single-handedly, you can avoid difficult ship battles altogether.

You don’t need to actually kill everyone to successfully complete a boarding action. All you need to do is clear the deck of the ship. So embrace your inner Gerard Butler and start kicking people left and right, using your Spartan Kick and other knock-back abilities to send the toughest enemies plummeting into the ocean below.

These tips should should help you survive longer on the high seas. Take some time to plunder easier ships, as well as really build up our ship and her crew. With a little practise, you’ll be a more terrifying than Poseidon himself.