Just Cause 4 Is A Series Of Chaotic Science Experiments

I’m standing on a bridge connecting two small mountains, staring at the tree-laden canyon and small river below. I turn around and walk towards the road, trying to find my bearings and get a handle on the controls. Seconds later, a car plows into me.

The screen turns to red and then grey, but I’m playing in a special “Jesus mode” for demo purpose so the game doesn’t end. Instead, I come back to life, get off the ground, and shoot a couple of airlifters at the car with my grappling hook and then a rocket booster.

As the car starts to float away it begins spinning counterclockwise, faster and faster, until it’s out of sight. A body plummets to the ground moments later, silently kissing the concrete 30m or so away.

Just Cause games have always struck me as surreal fever dreams, but Just Cause 4 feels particularly bizarre.

Ultimately, I think this could be to its benefit. I recently got to spend some time with the game at a Square Enix event and came away intrigued by the new possibilities for experimentation and morbid destruction in Just Cause 4.

This one will apparently offer a deeper story than in previous games, though still one involving toppling dictators and fighting paramilitary goons and, according to the game’s director, Francesco Antolini, completely bereft of any intentional political message.

More interesting was the addition of new weather effects and, most importantly, a customisable grappling hook.

More than any of the previous games, Just Cause 4 seems to lean into the underlying physics simulations that power its open world. In addition to letting you grab distant objects and surfaces and fling yourself at them, the new grappling hook also lets you attach mini-thrusters, hot air balloons and retractable cables to just about everything else in the world.

I’m still unclear on the background lore underpinning these contraptions, if there is any, but in practice it turns the series’ special ops protagonist, Rico Rodriguez, into an amateur scientist as much as a hardened, one-man killing machine. 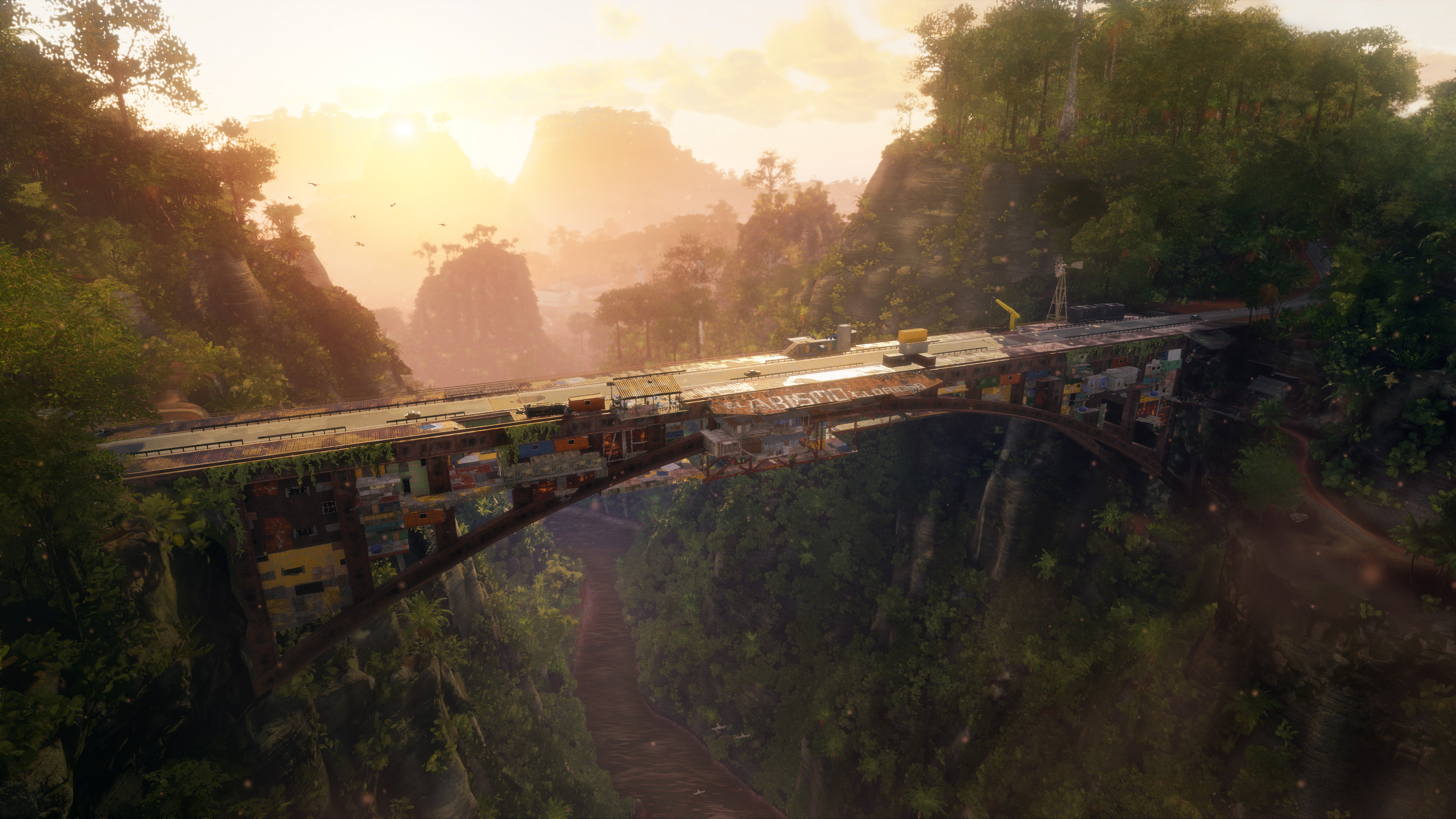 For all of its problems, Just Cause 3 had one important saving grace: The wingsuit. It combined beautifully with Rico’s grappling hook and parachute, adding another layer of flight to the game that felt finely tuned to be both overly exaggerated and forgiving while providing just enough resistance to make it feel somewhat believable.

You could wingsuit down the slightest hill without ever touching the ground — but only if you tried really hard.

The new grappling hook takes that same satisfying sense of player empowerment through manipulating physics and lets you apply it to the rest of the world beyond Rico. The three upgrades and their minor permutations, all of which Antolini said players will be able to fully unlock within the first hour, let you make other people, vehicles and destructible buildings fly, spin and zip around the same way Rico can if mixed just right.

Put enough balloons on a tank and a thruster in the back and you can sail it across a desert before dropping it on a group of Black Hand mercenaries (the game’s main antagonists). The same thing goes for other vehicles, people and animals, as well as larger pieces of explodable equipment.

My demo ended with a mission that had me infiltrating an enemy base surrounded by four large wind machines keeping a nearby tornado from ravaging it. I was able to shoot them until they blew up, or, if I was feeling more ambitious, attach a couple of thrusters to one of the edges so it would start spinning around and eventually build up enough acceleration to go flying into a barricade of nearby Black Hand henchmen.

Instead of just divebombing stuff with planes as in Just Cause 3, Just Cause 4 encourages an element of tinkering with the environment that feels more akin to Portal or, at times, even The Legend of Zelda: Breath of the Wild.

In an interview after my demo, Antolini bought up Nintendo’s game as an example of how open worlds are changing to focus on what players encounter between destinations rather than lists of objective markers.

Just Cause 4 takes place on a single large landmass infiltrated by rivers and a few beaches rather than a group of islands like the previous game. It takes place in South America, and each of the different biomes — a rainforest, a desert, a string of mountains — is intended to be inspired by that continent’s diverse climates.

While Antolini said that was important in terms of making Just Cause 4’s playground feel plausible, in his words a “fictional place that doesn’t exist but could”, the cleavages between each region appeared clear and distinct enough to resemble something more like a Legend of Zelda or Mario game where an ice world exists alongside a lava world and so on.

Antolini, for the record, thinks Just Cause 4’s regions connect to one another much more organically than a Super Mario Bros. game.

In addition to the new grappling hook tools that are meant to make random areas ripe for experimentation and exploration, the map’s “extreme weather” is also supposed to spice things up. While the tornado I encountered was in a story mission, those and other acts of nature are supposed to appear randomly in the open world as well.

Like the wingsuit from the previous game, Just Cause 4’s tornados show that developer Avalanche is a master of very specific things — in this case aerodynamics, or at least simulating them in effective and evocative ways in video games.

At first I approached the tornado in one of the game’s heavier vehicles, but wanting to take a closer look I eventually got out and started grappling around. Instantly I could feel the tug of the cyclone as it tried to swallow me up, even from a football field’s length away.

The way it tugged on me as I tried to slingshot my way to safety reminded me of wingsuiting in Just Cause 3, but with a sinister twist. It felt out of my control, almost like an invisible boss.

Just Cause’s enemy AI has never been very interesting, and based on what little combat I experienced in my demo, Just Cause 4 doesn’t appear to break with that legacy, but environmental threats such as these are a compelling substitute. In so far as traversal has far and away become the series’ best feature, complicating that with hazards beyond enemies who seem perpetually confused is a good direction for the latest game. 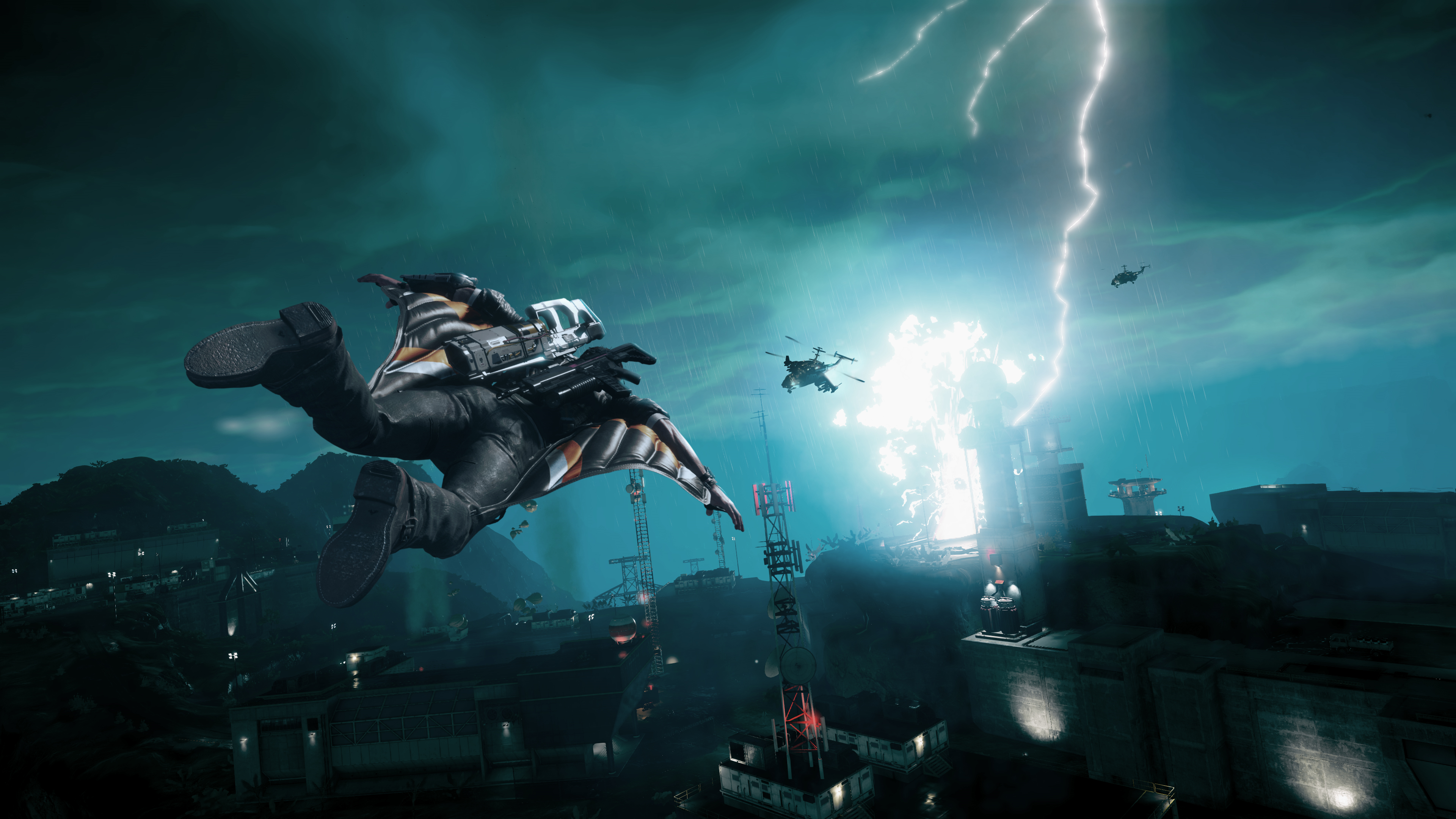 Just Cause 4 is scheduled to release on December 4, and while I didn’t encounter any game-breaking glitches during my session, it seemed rough around the edges. Just Cause games are buggy by reputation, and when Just Cause 3 came out, Kotaku’s Kirk Hamilton shied away from recommending it in his review because he thought it needed further patching.

Pop-in was the biggest issue I witnessed during my short time with the build. Details such as grass, foliage and rocks were missing from a distance and then magically appeared when just underfoot, something that could well be improved in the final months but was distracting during my time with the game.

The fun of creating chaos in Just Cause 4 relies in part on the illusion that its world feels lived in, and small cracks exposing the simulations underneath the veneer can ruin the fantasy. The world’s much more fun to be in when you’re breaking objects, not the game.