More Games Should Let Us Replay The Tutorial

Of all the many valid reasons I’m still playing The Witcher 3, there’s one that’s not related to the game’s quality. If I put it down for too long, I’ll completely forget how to play. It’s a problem that extends to every game I own.

I recently discovered a game in my Steam library that lets me replay the tutorial whenever I want, and I wish more games would give me that option.

It feels like the moment I switch from one game to another, the previous game’s control scheme flies right out of my head. When I come back to that game, I can usually remember the basics—WASD to move, space to jump—but the finer points vanish as if I’d never learned them at all.

Is crouch C or control? Is it F or E to use something?

If the game uses a controller, I’m even more hopeless, all the more so if I switch to a PS4 game from something I was playing with my Xbox controller. Rereading the control scheme in the menu can sometimes help, but more often than not, it feels too overwhelming.

I’ll fumble around in the game for a while before going back to whatever I was playing before.

Over the weekend I opened up the space stealth game Heat Signature to check out the new stuff the developer has added for the game’s one year anniversary.

There are daily challenges, tricky new enemy types, and cool new missions. It’s a meaty update, and I was excited to revisit a game I’d enjoyed when it launched but hadn’t put much time into since.

I hadn’t played the game in a year, and in addition to forgetting what I was supposed to be doing in the game’s world, I couldn’t remember what any of the buttons did. I went into the pause menu to look up the keyboard bindings when I noticed an option sitting right at the top: replay tutorial. 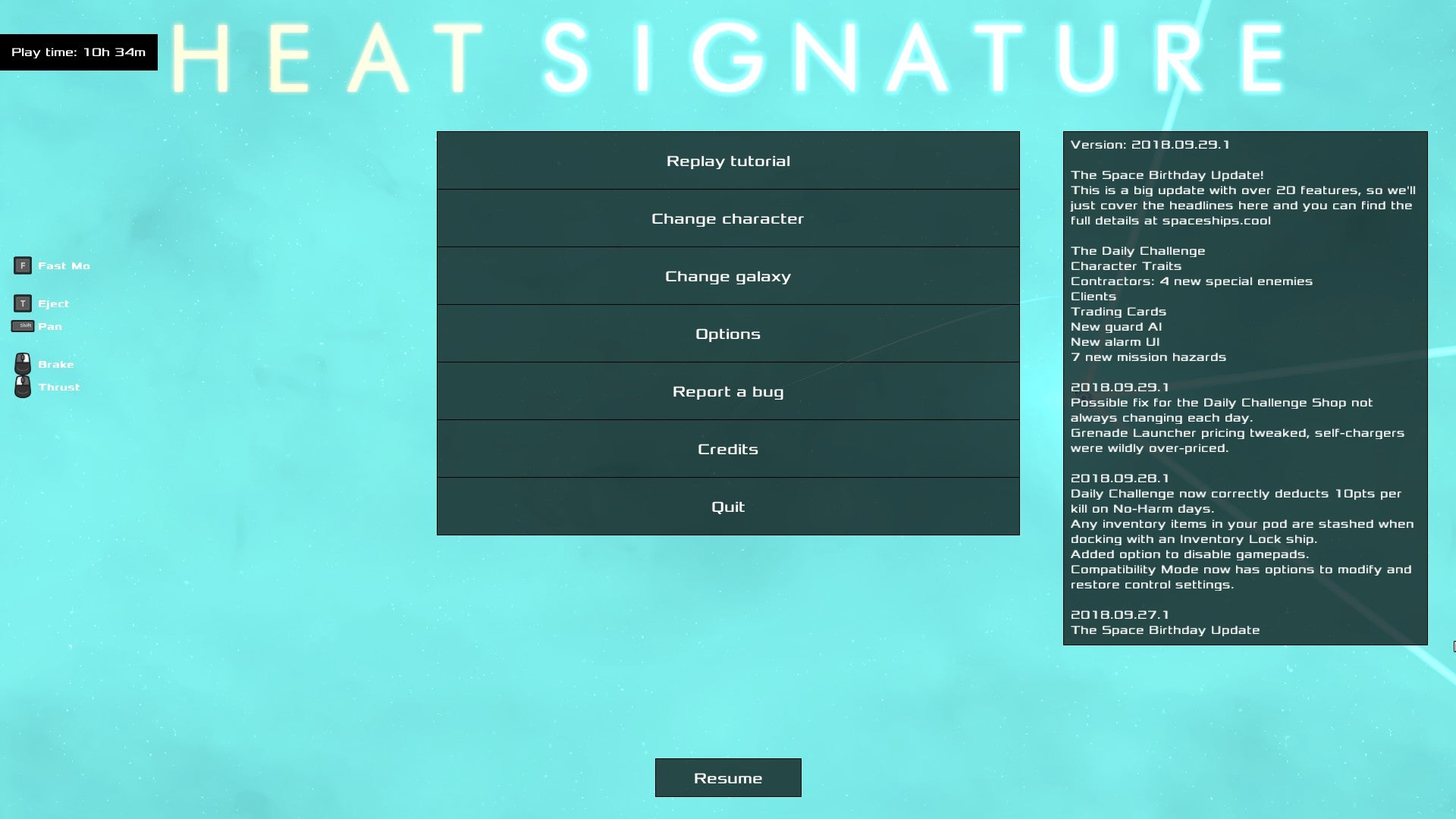 Being able to replay Heat Signature’s tutorial isn’t a new feature, but I hadn’t noticed it before, because I hadn’t needed it. I clicked it and was popped back into the very beginning of the game. The tutorial ran through movement, inventory, and remote controlling my spaceship to keep me from suffocating in space when a mission went haywire.

It reminded me what Heat Signature’s story and ultimate goal were. When the tutorial ended, the game dropped me seamlessly back into my in-progress playthrough. I was still rusty (I promptly got a score of zero on the daily challenge), but at least I knew how to play.

I couldn’t believe more games haven’t thought of this. Some games have reams of explanatory text, like The Witcher 3, or video tutorials you can watch, like Deus Ex Human Revolution. Fortnite’s playground mode or Overwatch’s practice mode give me a low-stakes way to refamiliarise myself before jumping into a match. But getting to replay a tutorial without sacrificing my progress by starting again could keep me from giving up on so many games.

Digging through my Steam library, I realised it’s an option in several of my favourite games, such as Dishonored 2 and Hitman. As more games blend their tutorials into the story, these standalone trainings can feel unwieldy, and it’s a feature that’s largely fallen by the wayside. Still, I appreciate it when it’s there.

I’m probably not the only person to struggle with this problem, minor as it may be. As we get more and more games to play, it gets harder to keep track of all those unique button layout, combos, and special abilities. This little touch in Heat Signature let me revisit a game I’d enjoyed but might have otherwise abandoned.