Nathan Grayson
Oct 1, 2018, 2:00pm
Share Tweet
A U-Haul truck is seen in the side mirror of a another truck sitting on a dealer lot in this 14 June 2006 file photo, in Des Moines, Iowa. Photo: Charlie Neibergall (AP)

I recently left my apartment in northern California and drove a U-Haul full of my belongings to a new place in southern California. Although it’s a game that’s played by millions every day, I cannot recommend Moving.

Moving is a musty, moth-devoured jumper of half-completed game concepts and narrative threads. It is a lengthy experience that regularly experiments with genre and pacing, but one that ultimately leads to long stretches of frustration and tedium.

While Moving clearly draws on everything from puzzle hits such as Tetris to walking simulators such as Gone Home to the frankly deranged driving antics of Mario Kart, it entirely misses the point of what made those classics special. Oh, and don’t get me started on the microtransactions.

Which brings me to the microtransactions. Before you can even begin Moving, you have to shell out to acquire a supply of objects that basically function as in-game currency: Cardboard boxes, garbage bags, paper towels, cleaning cloths and tape.

See, the central goal of Moving’s first portion is to empty an apartment or house — depending on which difficulty setting you choose — of every object that isn’t nailed down.

It’s an interesting use of a game environment that forces you to consider every minute level design choice, but if you run out of these items (especially boxes), the entire experience comes screeching to a halt — as I learned multiple times over the course of my time with the game. And not one of these items can be acquired through gameplay.

In fact, there’s only one useful resource you can pick up without opening your wallet — friends — and even then, you’ll need to have done a good job playing Moving’s prequel, The Rest Of Your Life Up To That Point, to have any friends populating your Friend Dungeon. 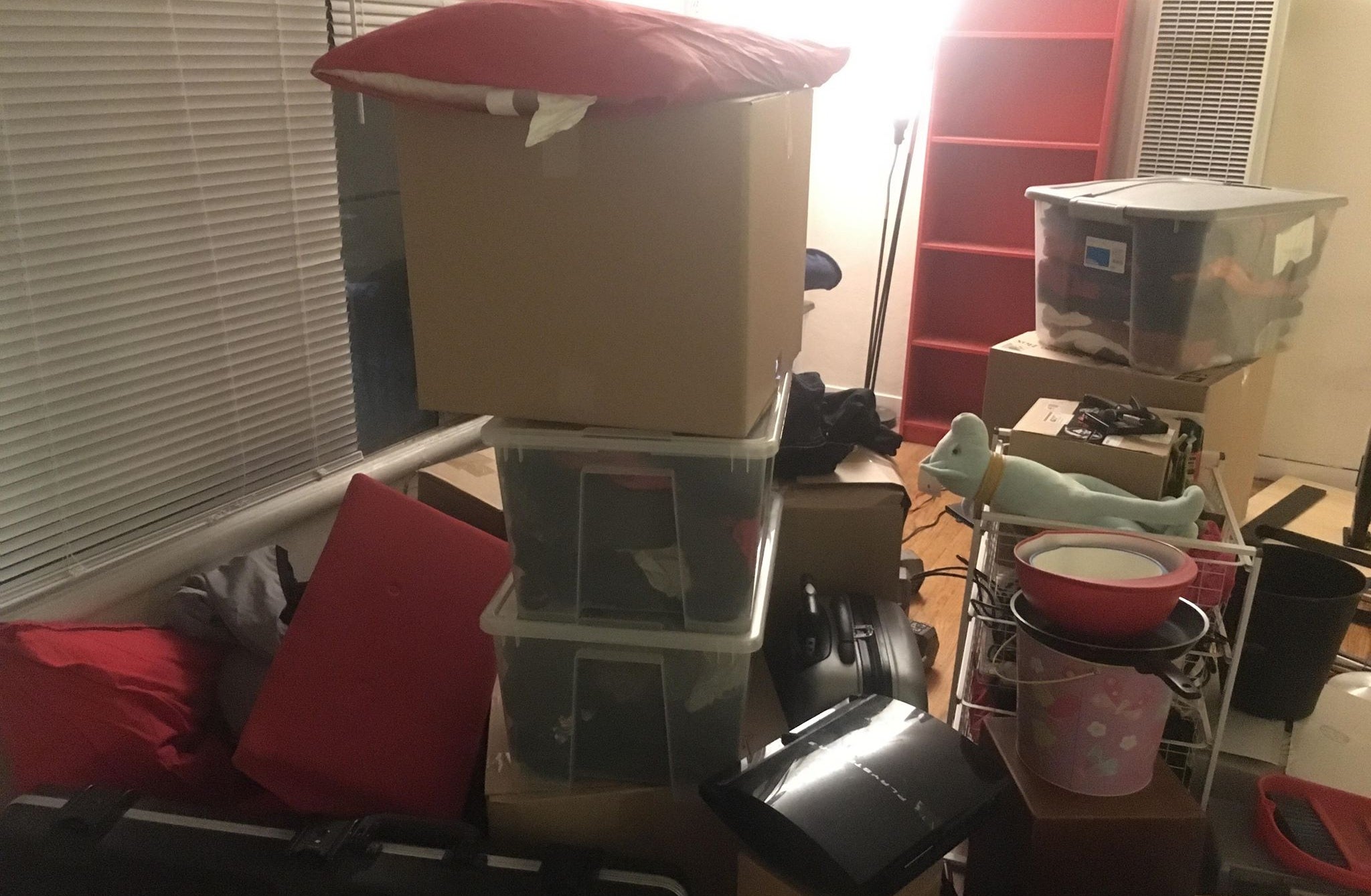 Approximately 25 hours of packing followed by an additional ten spent driving and moving in. Also, one cumulative hour spent yelling about spiders.

The packing portion of Moving is its most narrative-rich and, somewhat deceptively, among its most action-packed. In it, you’re forced to probe tainted portions of your living space that haven’t seen light from the Lord’s healing rays in years, if not decades.

You quickly discover that these areas have been overrun by rot and spiders. You might be thinking, “OK, so I just torch the whole thing, right?”

It’s tempting, but these closets and crevices are also full of treasures: Old birthday cards; discarded hard drives; video game magazines from back when they made video game magazines; clothes that don’t fit you any more or have become too embarrassing to wear; a bunch of costume pieces from that time it was suddenly Halloween and you had nothing, so you just bought a bunch of leftovers from Party City, but then said “fuck it” and stayed home.

The challenge, then, lies in sifting through these arachnid-ridden wastes and deciding whether to hold onto something because it has sentimental value or scream and fling it into the garbage because it’s covered in skittering, chittering cave aliens.

The problem with this portion of the game is that it doesn’t really amount to anything.

For instance, while digging through my things, I uncovered a mysterious key, a bunch of strange CDs I don’t remember ever having purchased, and an unopened box containing a life-sized plastic human skull. I felt like I’d struck this rich narrative vein, or at least that I was about to uncover a secret area or something along those lines.

Drawing on my knowledge of classic adventure games such as Monkey Island, I tried combining the bizarre selection of items in as many ways as I could think of, but I didn’t even get any funny little messages about how keys don’t work that way, and the skull won’t play the CDs for me no matter how much I beg. It was a dead end.

Worse, it brought me no closer to solving the mystery of the spiders or defeating their queen, who’d been living in my kitchen for several months and who I said I was happy to have around because who doesn’t want a chill spider friend who eats flies and slowly colonises more and more of your kitchen, but who I was actually just deeply afraid of.

A real photo of the inside of my closet

Once I’d put my things into boxes, I got hit with a plot twist: My old, ratty mattress. I didn’t want it any more, but I had no means of disposing of it. And so, the game offered me another microtransaction: I could hire people to come drag it away, hopefully to Hell, for me. This cost over $100.

I was not pleased when the game then proceeded to halt all progress until I ponied up again, this time for a U-Haul truck. To Moving’s credit, though, it shifted genres entirely at that point, becoming a classic we’ve all played once or twice at some point in our lives: Box Tetris.

The goal of Box Tetris, as we all know, is to strategically cram as many boxes as possible into a small space — in this case, a moving truck — without touching the ceiling. It’s a lot like regular Tetris, except that if you fuck up, you have to manually remove all the boxes in order to start over.

You can also manually curse at the heavens so loudly that the neighbours consider calling the cops on you because your U-Haul is technically parked in a no-parking area right in front of their house, but that part is optional.

Box Tetris is best enjoyed with a friend who’s way better at it than you and who’ll save all your belongings from toppling over and shattering into a million pieces even though you aren’t paying them shit.

If you choose to go this route, Moving adds a management layer in which you have to balance your ever-rising “guilt” meter with your friend’s corresponding “resentment” meter. You do this by making vague promises that you’ll see each other again soon and saying you’ll buy them food or beverages at some nebulous point in the future.

With all of your things crammed into a truck, Moving shifts genres again, transforming into the worst driving game I’ve played in my life. The truck is large and unwieldy, like piloting Voltron if Voltron was just a giant, disembodied robot foot. You never feel fully in control, meaning your things and, oh yeah, other people’s lives are constantly in peril.

If you get corralled onto a small road or a highway lane with guard walls on both sides, god help you. You spend this portion of the game silently freaking out for seven hours — more if you get lost while driving from one end of California to the other. Moving pegs so much of its appeal on this sequence, and wow, what a tremendous mistake.

It gets worse, too: There’s this huge landmass — bigger than any Grand Theft Auto game — that you should be able to explore at your leisure, but some mysterious force compels you to blaze through it all as fast as you can and only stop for petrol, snacks and a bathroom break once.

Tedious survival elements creep into this part, too, with your bladder somehow filling up at speed that is, frankly, unrealistic.

So you arrive at your new place exhausted, sweaty, and tweaked out on caffeine. That’s the end, right? Wrong. Moving gives you a fake-out ending before tossing you headlong into the final boss battle: Moving in.

If you pick the building I did, this involves juggling filling out paperwork and finding a suitable place to park your giant moving truck on a crowded street because there aren’t any actual parking spots nearby.

The game knows this, so it hits you with its final, most insidious microtransaction: The option to hire movers.

After all I went through, there was no way I was carrying my hulking work desk up three flights of stairs, so I gave in. I’m not proud to admit it, but at that point, I just wanted to be done. Thankfully, if you hire movers, Moving pretty much plays itself.

Then you go upstairs to your new place and realise you still don’t know what that mysterious key is for, and you discover that an adventurous pack of spiders hitched a ride on the underside of your kitchen table.

And that’s it. That’s where it ends. It’s a clear setup for the first DLC expansion, Settling In, which doesn’t have a release date beyond “when it’s done”.

As it stands, the Moving series is going nowhere fast, and I’m tempted to switch over to Moving’s main competitor, Living In The Same Place For The Rest Of My Life.