red dead redemptionred dead redemption 2rockstarxbox one
To sign up for our daily newsletter covering the latest news, features and reviews, head HERE. For a running feed of all our stories, follow us on Twitter HERE. Or you can bookmark the Kotaku Australia homepage to visit whenever you need a news fix.

I’m about to go away for a week, holidaying far from my PS4. I’ve been trying to use the last few days to get the most out of the early copy of Red Dead Redemption 2. I think I’m doing it “wrong,” but having a great time along the way.

Lately I’ve stopped advancing the story, much as I hear from our reviewer Kirk Hamilton that it is great. Instead, I’ve been wandering and chasing down sidequests and just seeing where my curiosity takes me.

There are many ways to de-fog a map, but look at this madness. I started in the west, somehow skipped over to the northeast and then galloped for a long time down to the swamp. 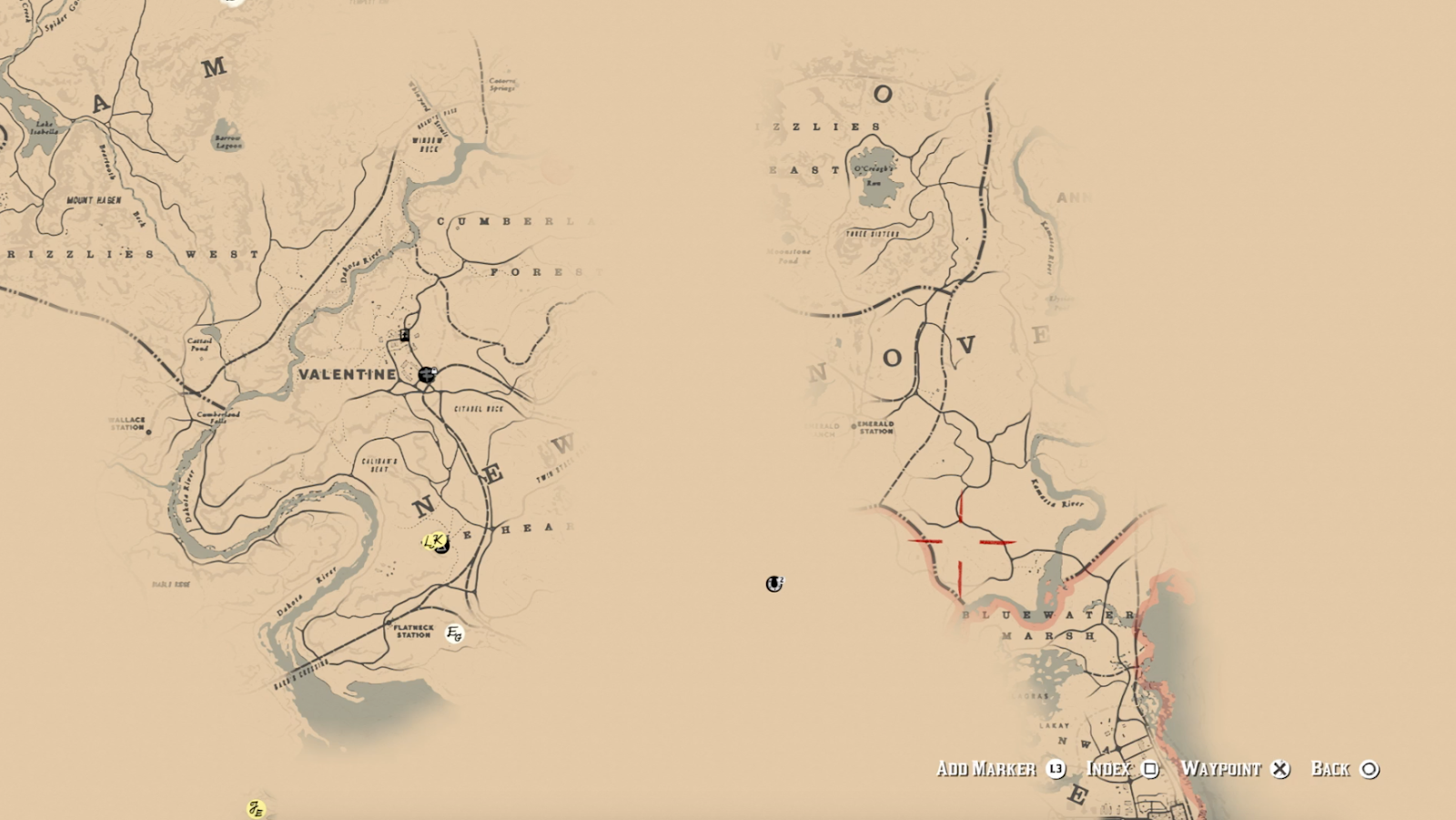 I don’t even know how I managed to keep the middle part of that foggy as I finally reached the southeastern city of Saint Denis. I remember when Kirk told me he’d finally reached St. Denis, many hours into playing. I got there way early, rule-breaker that I am.

Kirk’s been playing as a saint, or as saintly as our protagonist gunslinger Arthur Morgan gets. To test the contrast, I’m playing as a man who antagonises everyone at every opportunity, usually with a verbal stab at their stupidity. 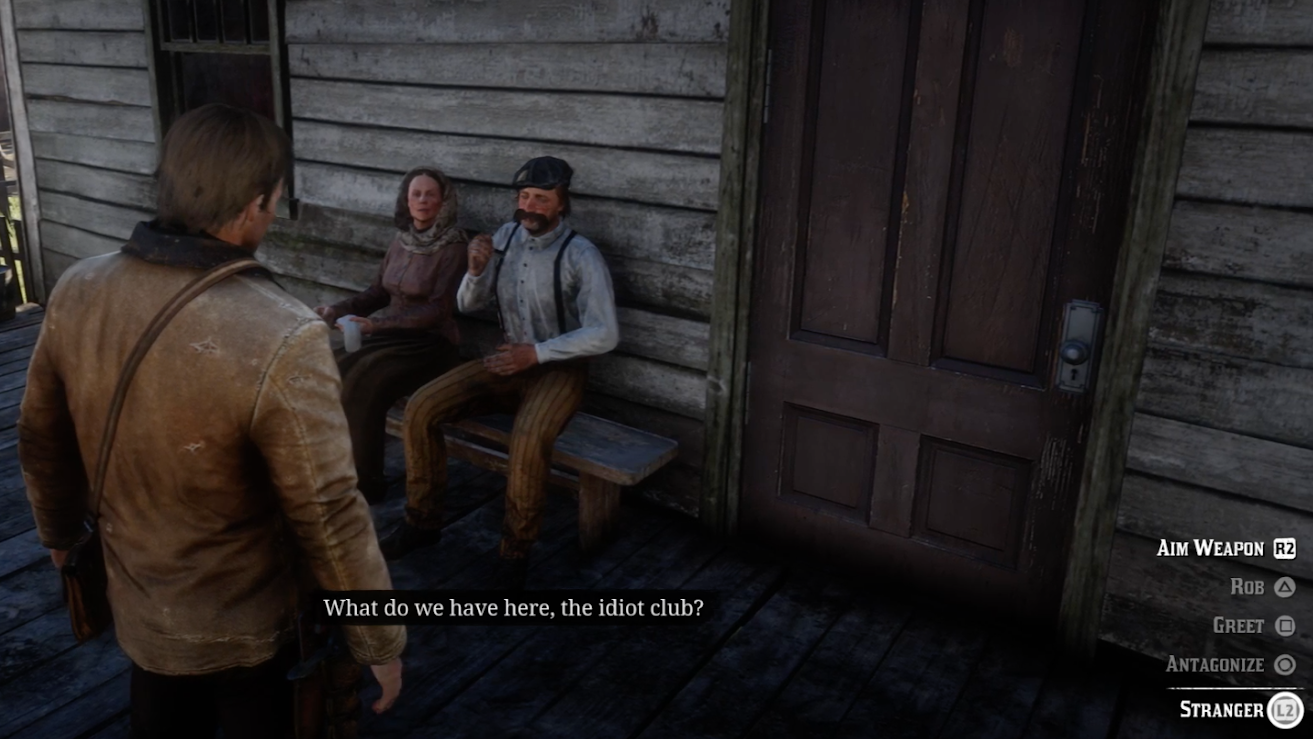 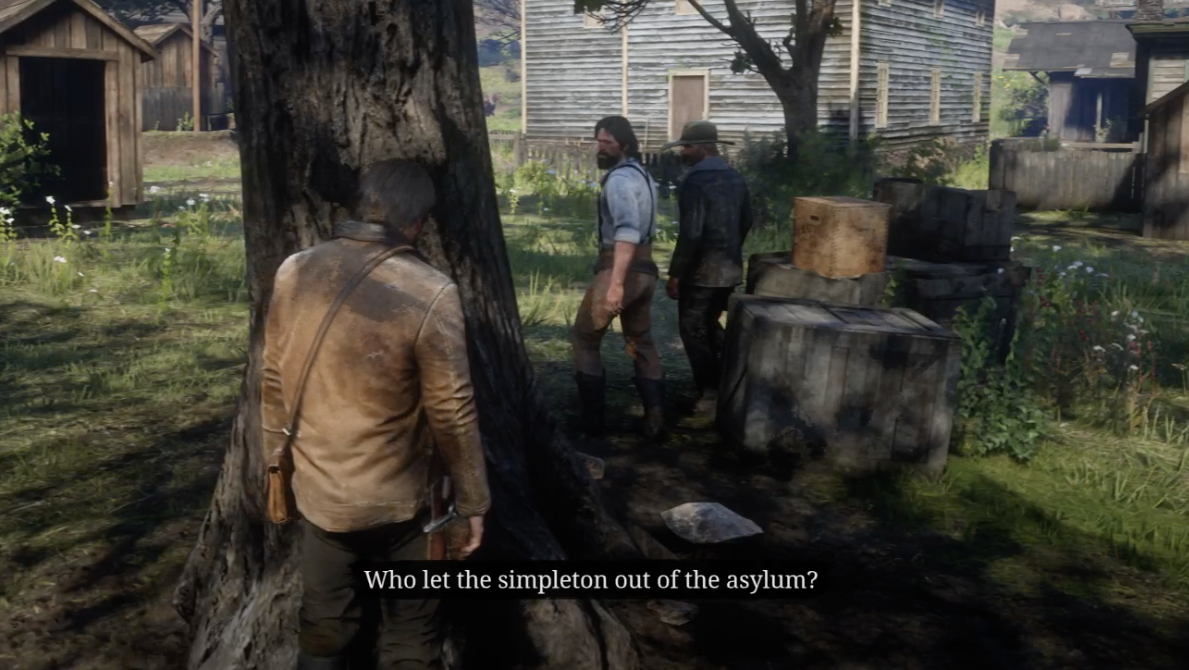 It’s not easy to be bad. As I play I worry I’m cutting off my options. If you say nice things to people, I’m sure good things happen, not the least of which is that you aren’t killed. Keep pissing them off and they run away or start shooting. 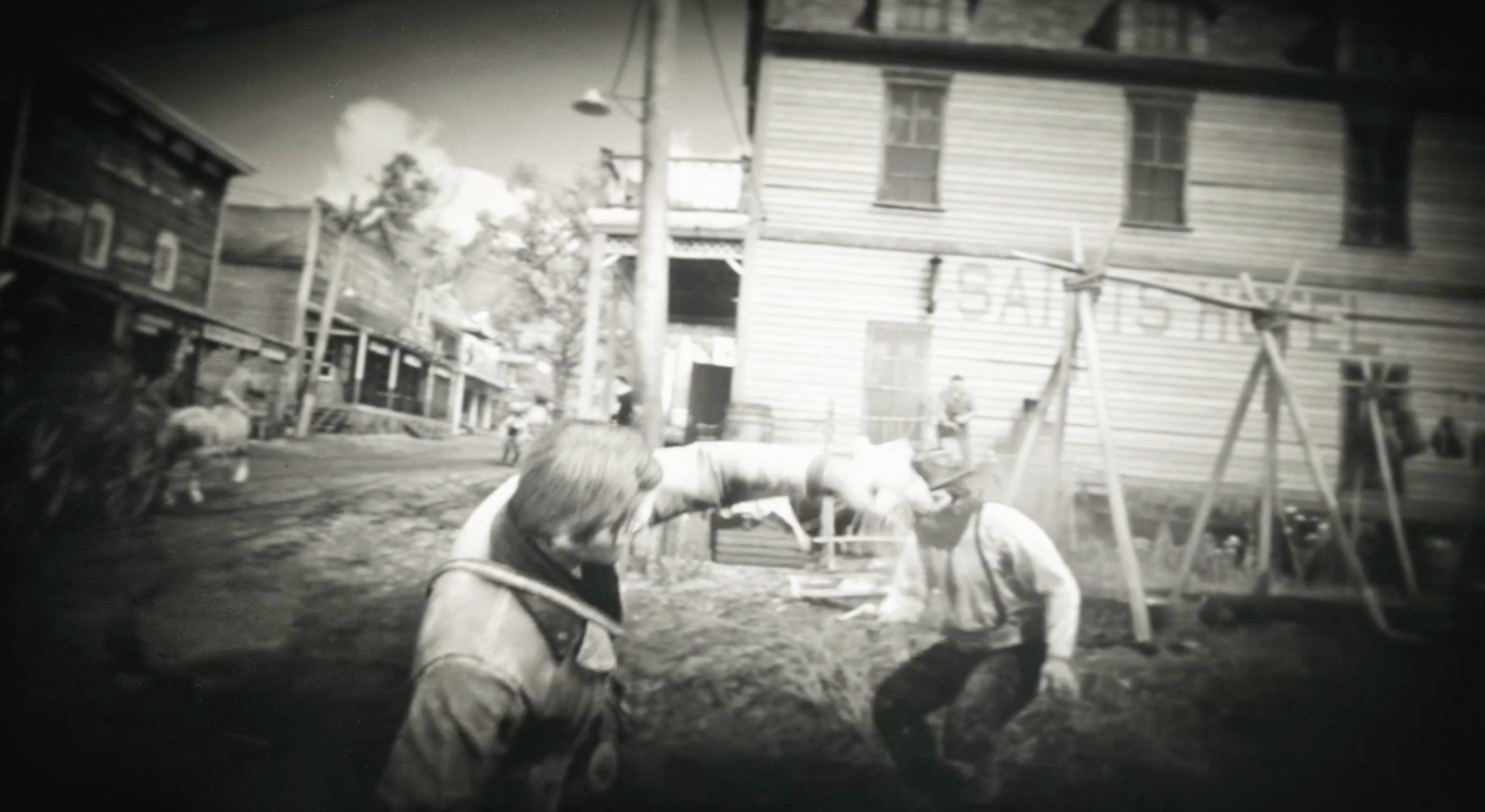 My focus on pissing everyone off has put more metal in Arthur’s torso than there is in his pockets. Seems like few people in this world can take three casually tossed insults without opening fire. I respond in kind and win the fight most of the time, but not always.

Survival has its price, and bounties for wrongdoing are severe. I nudged a pedestrian with my stallion and triggered a shootout that left Arthur needing to pay 50 of his 60 dollars to return to town unbothered. The steeper price is not Arthur’s death but the death of a horse whose loyalty and abilities have been raised over hours of play.

My Arthur insults a woman in a doctor’s waiting room and the next thing I know, the cops are shooting. One of their bullets strikes with unusual cruelty, and I’m mourning his beloved horse Epona. It’s only Arthur who respawns. Back to an untrained starter horse I went, the price of speaking cruel words in this game’s cruel world.

I can at least point to one instance of Arthur’s incorrigibility doing an arguable good. Stealing from an ostensibly blind beggar exposed his charade. The game steers Arthur towards charity early on, making it a mission goal to rescue a man whose horse has broken free from his wagon. I paused when I saw his horse gallop away, hesitant to help and make Arthur seem nice. That wasn’t my Arthur; my Arthur was a jerk.

But I sniffed out that the game expected me to be help, which I later confirmed when I perused the mission’s checklist of optional mission objectives. Rescuing the horse was one of them. I went ahead and rescued the horse, and then felt bad when Arthur’s companions praised him for it. My true Arthur does not often do praiseworthy things.

Later, to compensate, I borrowed a man’s horse and then retroactively put that verb in air quotes. 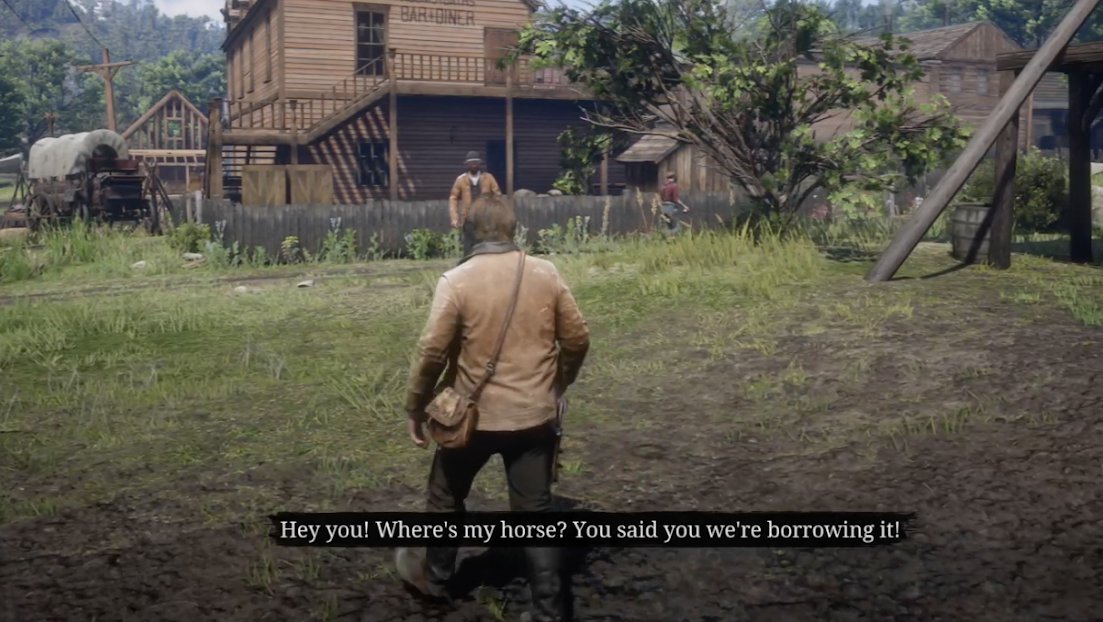 I confess that I’m thrilled to discover I might be resisting the game’s current, that I seem to be playing the riskier way, that I’m roleplaying against the subtle nudges of the systems and the script.

Defiance, even such as can be bottled within a game, can be fun, which is part of what Rockstar has long understood and crafted into their games. Who has not ignored the story missions in a GTA in favour of rampaging down a busy city street?

I think I’m supposed to be getting on with meeting people back in my basecamp. I probably should do more of the kinds of introductory missions I have tried, those that teach you how to buy new horses, set up camp, cook or hunt bears.

I’m likely missing some education. I’m OK with that for now. I’m off tracking down old gunslingers in corners of the map I’m not yet supposed to visit, cursing out people I wasn’t yet intended to meet. I met a man the game calls “Gavin’s friend.” He’s searching for Gavin and now I am, too.

Look at the lighting! 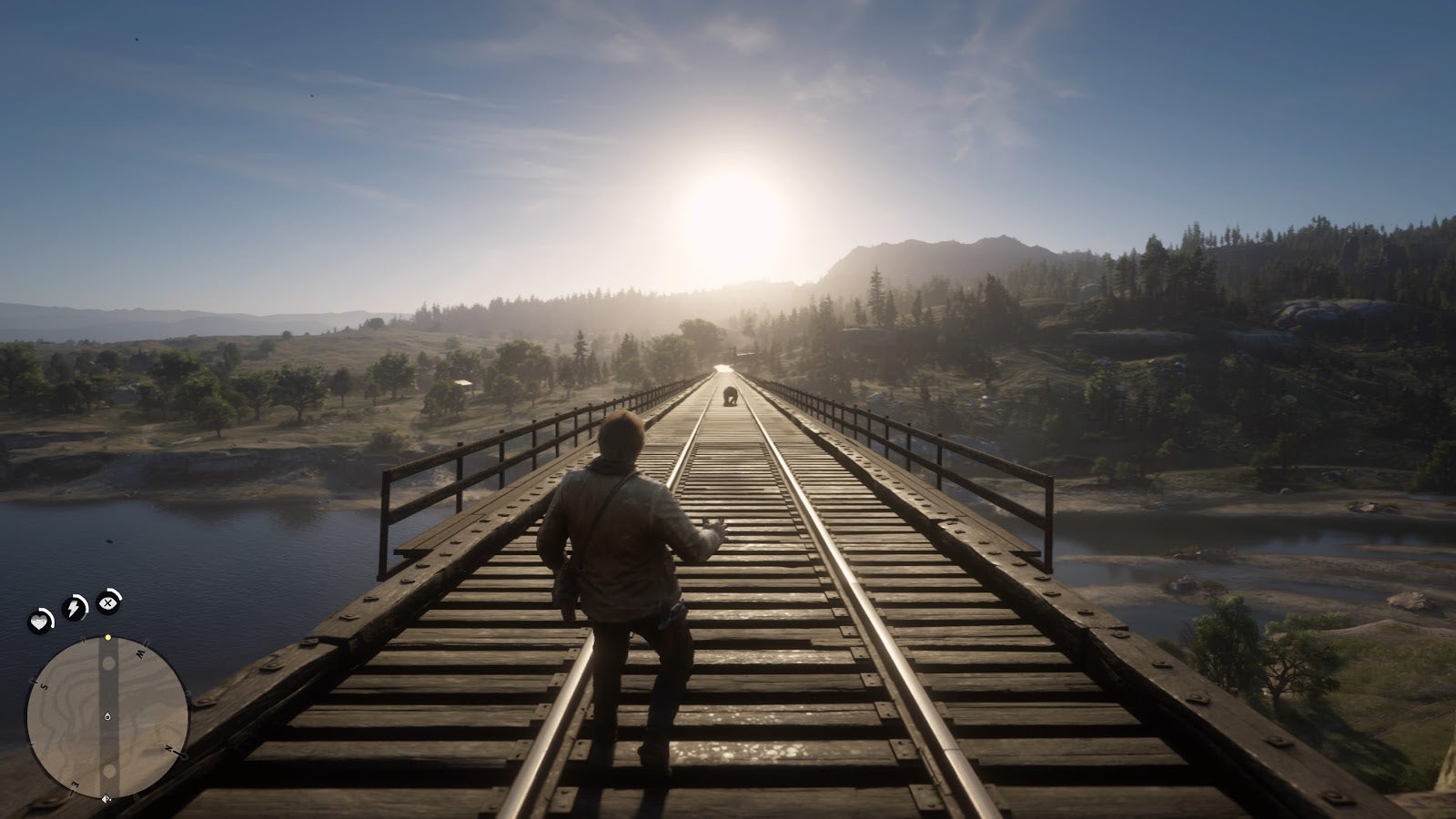 Look at these great ads! 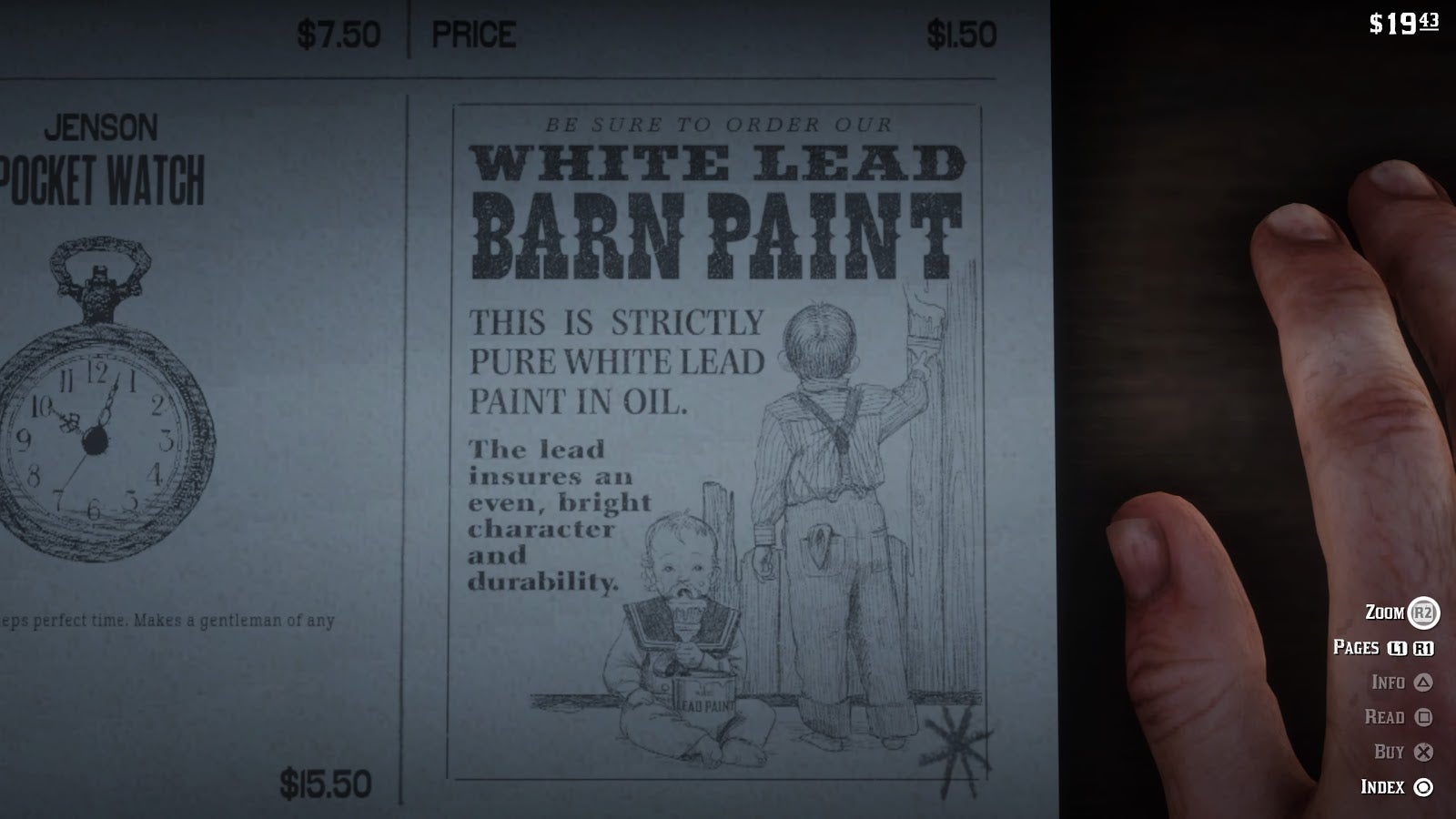 Look at these drawers!

Plot twist at the end pic.twitter.com/8a9873kvnw

In the real world, I’m about to go on holiday, where I’ll play only as much Red Dead Redemption 2 as my Nintendo Switch will run.

I’m freely roaming. I’m testing the limits. I’m having a very good time, just hoping I won’t block myself from too many options by continuing to be this much of a miscreant. I’m having too much fun.