cygamesdragalia lostexcusesiosMobile
To sign up for our daily newsletter covering the latest news, features and reviews, head HERE. For a running feed of all our stories, follow us on Twitter HERE. Or you can bookmark the Kotaku Australia homepage to visit whenever you need a news fix.

When Nintendo and Cygames’ Dragalia Lost launched in the US at the end of last month, I said it was a slick version of the same old mobile action role-playing game. Turns out a little slickness goes a long way, as I’ve been playing the damn thing every day since. Why? Let me pull out my list of excuses.

Excuse One: The Music Is So Damn Catchy

High fantasy meets bubbly pop is the best way to describe the majority of the music composed for Dragalia Lost. Each piece is expertly engineered to crawl inside your brain and live there forever.

There are times I start up the game and spend several minutes just watching the little characters I’ve collected stroll along the screen as the main theme plays.

Each song on the Dragalia Lost soundtrack fits neatly into its place. The opening song lures the player into the game world. Pounding dungeoneering music transitions smoothly into pleading chants when a boss fight occurs.

There’s even special music for timed in-game events. We’ve been through two since the game launched, each with its own unique sound.

Excuse Two: The Art Is So Lovely

For some people there is a style of art that instantly appeals to their sensibilities. Dragalia Lost’s art just makes me happy. From the chibi 3D characters to the traditional 2D art, I love each new image the developers produce.

That includes the menu screens, even when they are cluttered with stats and announcements of special events. Here’s one of the new rotating opening menus from the newly-launched Halloween event. 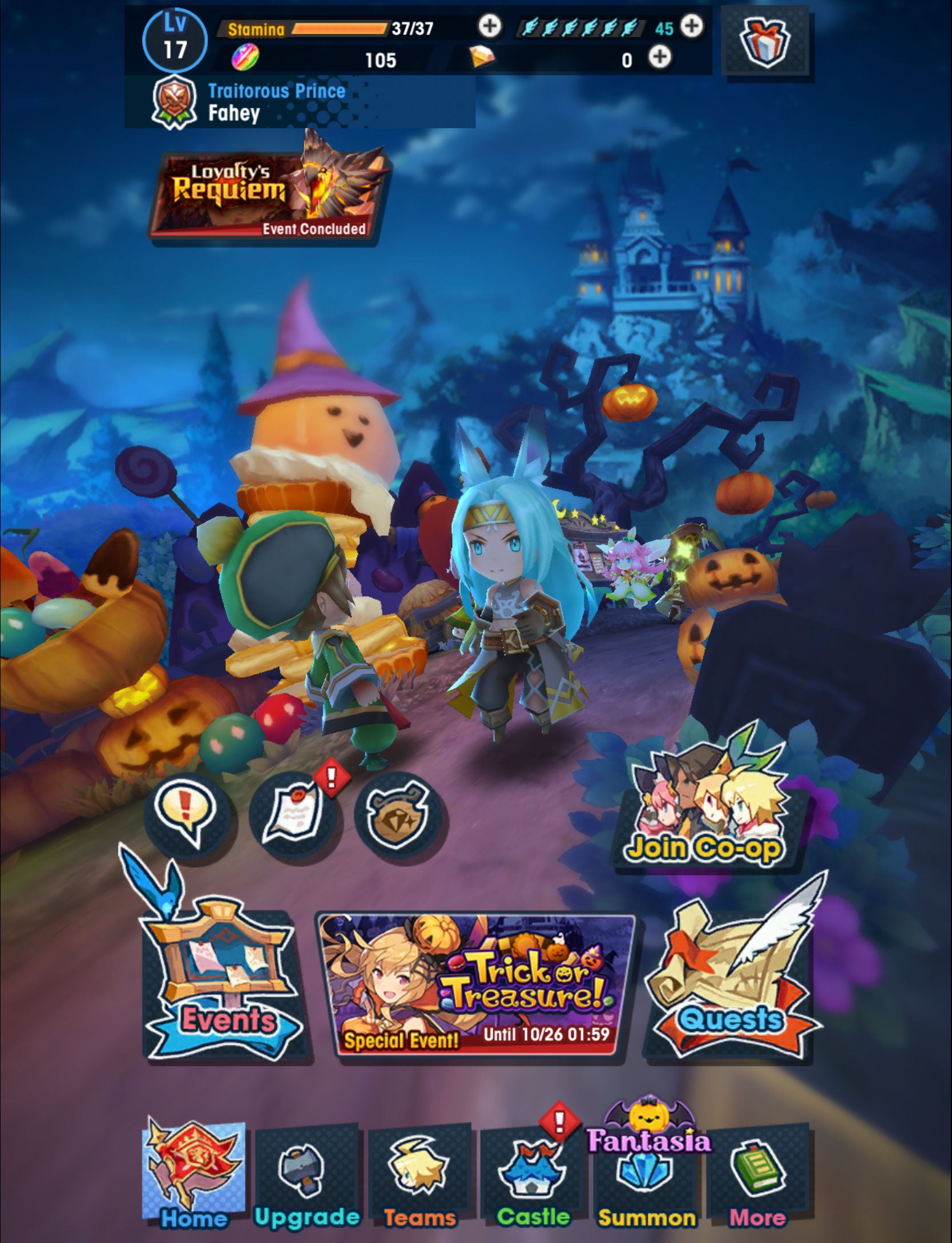 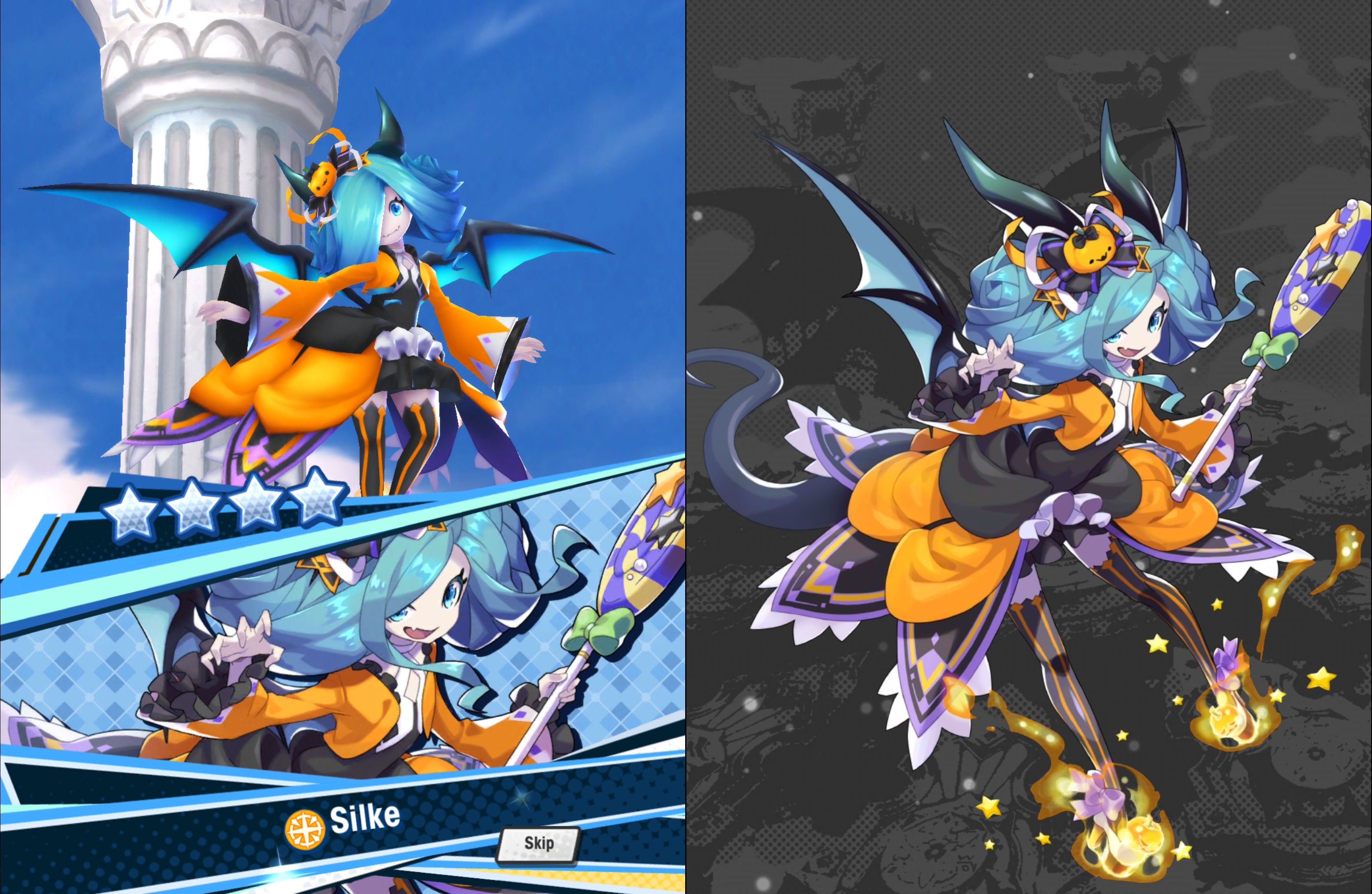 Silke is totally a dragon and not a girl in a costume.

… I respect the passion and effort put into their creations.

Nothing gets added to Dragalia Lost without some sort of story attached. Every character, from the lowest rank to the most powerful five-star ultra-rares, has a multi-chapter narrative that serves to expand upon their personality or provide backstory.

The same goes for the collectable dragons. As players upgrade and strengthen their bonds with the mostly scaly but sometimes suspiciously human-looking creatures, a story slowly unfolds.

It’s all pretty compelling stuff. So far it’s all been very well written, with humour and heart.

Even the gimmicky characters released for special events get their own storyline. Edward the butler, in his normal form, has several chapters of story to unlock. Edward in vampire form, released this week for Halloween, has his own tale to tell.

There are things to buy in Dragalia Lost. It’s a free-to-play mobile game, so that’s pretty much its business model. The difference between this game and other collectable-character powered mobile role-playing games is there is nothing I feel I need to buy.

I don’t get big flashy banners advertising sales or special time-limited deals. A small, unlabelled icon on the opening screen takes players to the store, where they can purchase premium currency or various upgrade items.

Some of it costs real money or premium currency, though there’s stuff to buy with money earned in-game as well.

Even the store is adorable.

Dragalia Lost isn’t just chill about people buying stuff. It’s quite generous with the crystal dealies needed to summon new weapons, characters and equipment. The game constantly tosses the stuff at you. I’m six chapters into the main story, and its still raining gems.

I am not averse to microtransactions in my free-to-play games. The game just has to earn it. When I drop $15 on some premium currency, it isn’t because I feel as though I can’t progress without doing so. It’s because I feel the game has earned it.

So far Dragalia Lost has earned $15 from me. There may be more where that came from down the line.

Final Excuse: I Play What I Want

Look, I don’t have to explain myself to you people. I’m having a good time with Dragalia Lost. The stories are great, the art is lovely, the music catchy, and the special events keep me coming back.

An Australian release date has not yet been announced.