This week, for the first time in its history, Star Trek Online got the chance to launch content related to a concurrent Trek TV series with Age of Discovery, a mini-update that brings gamers into the time of Discovery. This first slice does a grand job of capturing Discovery’s look and it’s tone — but it also slips up in similar ways as the show did.

Age of Discovery sends players back to the 2250s, casting them as Starfleet Academy graduates who — despite the fact that the Battle of the Binary Stars just led to all-out war between the Federation and the Klingon Empire — are more concerned with who passed their linguistics exam or if they got a cushy senior position in their starship training cruises than they are with the thought of heading to the stars as soldiers on the frontline.

Soon enough, your character and their fellow graduates (joined by Cadet Tilly herself, voiced by Discovery’s own Mary Wiseman in a delightful turn) find themselves confronting that harsh reality when their own training cruise is interrupted by attacking Klingons — specifically J’Ula, the sister of Discovery’s onetime baddie T’Kuvma — forcing your Cadet into the uneasy position of wartime command.

It is, aside from being set in the timeline of Discovery, pretty much a shiny new skin over the game’s current tutorial for Federation captains — set in the game’s “present” of 2409 — right down to the fact it’s the Klingons who violently disrupt your cadet’s training cruise there as well, because war, war never changes, or something like that.

But it’s a very pretty skin nonetheless, as cinematic as a nearly decade-old MMO can be in replicating the swanky aesthetic of a modern day streaming service show — and with Wiseman’s Tilly along for the ride, it goes a long way in making a familiar story feel suitably like Discovery.

Lotta conversations with Tilly over Klingon corpses in this. (Image: Cryptic Studios/Perfect World)

But as nice as the aesthetic and tonal aping is, Age of Discovery’s true strength lies in something else it borrows from the early episodes of Discovery’s first season, an underlying ethical tension surrounding one of the oldest conflicts in half a century of Star Trek history: Is Starfleet a scientific, exploratory organisation of pathfinders? Or is it an army of soldiers, the strong arm peacekeepers of the Federation’s utopia?

It’s something Tilly and your fellow cadets keep coming back to as the situation they find themselves in devolves more and more, and the pressures of command are thrust upon you.

None of them signed up for this — hours before, their biggest concerns was passing final tests and wondering which assignments they’d get posted to as the fresh-faced graduates of an academy that defines itself under the watchwords “From the Stars, Knowledge”.

It was interesting to see Discovery ponder those questions with seasoned Starfleet officers such as Burnham, Lorca and Stamets. But with a cast of cadets at its core, Age of Discovery has the chance to see it framed with the youthful lens of idealistic Starfleet newbies.

Or rather, had. Unfortunately, just like in the show itself, these debates don’t really get picked up on after their initial probing in Age of Discovery — raised and then promptly dropped to jump to the next action setpiece.

It’s perhaps more excusable for Star Trek Online, as it’s primarily a video game rather than a piece of dramatic storytelling. The thought of, say, going and seeing what happened to the Discovery’s sister ship, the USS Glenn, before its grim fate in the TV show (and blowing up more than a few Klingons while doing so) is much more appealing in an MMORPG than everyone sitting down and having a debate about the ethical push and pull between the scientific and militaristic ideals of Star Trek’s utopian society.

But it’s a shame that Age of Discovery’s aping of Discovery itself is so faithful that, at least so far, it includes making some of the same missteps the show sadly did. Being able to add to the context of the show by engaging more with ideas it didn’t have time to do itself could lead to some really interesting stories, and it’s unfortunate Star Trek Online didn’t chase that potential.

J’Ula prepares to devastate Starbase One, and the Star Trek timeline as we know it in the process. (Image: Cryptic Studios/Perfect World)

But it isn’t all missed opportunities. The show Discovery has great potential to explore how its world interacts with the wider one of Star Trek, and Age of Discovery actually follows up on that.

It does this in some fun, minor ways — such as the fact that Jeffery Combs, who’d recently lent his voice to the game for its Deep Space Nine expansion, makes a recurring guest appearance in Age of Discovery as Federation Captain Thy’kir Shran, the Andorian great-grandson of his Enterprise character Thy’lek Shran, a lovely way to tie the worlds of the two Trek prequels together.

But most crucial is the way the current slice of content comes to an end, and how it bridges Discovery to the world of Star Trek Online as we know it, which is mostly set nearly 200 years after the events of the show.

The last mission, set during the Klingon’s attack on Starbase One — the disastrous fallout of which is glimpsed in Discovery — sees your character caught in an attack from a Klingon weapon, created from stolen mycelial network tech from the Glenn, catapulting you and your crew into this guy’s backyard:

Crewman Daniels — or rather, Temporal Agent Daniels, from Enterprise. The 31st-century native with a fondness for showing up and safeguarding disruptions to the Star Trek timeline (hell, it isn’t even the first time he’s been in Star Trek Online — he does a similar thing to characters from the original series era in the Agents of Yesterday expansion) shepherds your character to a new home in the game’s “present” 25th Century, tasking you with helping him fix the timeline disruption caused by the Klingons’ misuse of mycelial technology.

It’s a roundabout way of explaining how your Discovery-era characters can go off and do the rest of the content the game has to offer — it’d be a bummer if you couldn’t! — but it presents a fascinating opportunity to critically examine some of the moral quandaries laid out in both the show and Age of Discovery, with the context of nearly 200 years of Star Trek history separating your character from them.

A bunch of cadets who don’t know their day’s about to be ruined by the Klingons. (Image: Cryptic Studios/Perfect World)

Time will tell if Star Trek Online gets to actually do that. More stories set in the Age of Discovery timeline are being planned — including one, as teased at Star Trek Las Vegas recently, that will include an encounter with the ISS Discovery, the Mirror Universe version of the show’s titular ship that we never actually got to see while “our” Discovery was off gallivanting around the Terran Empire in the first season’s back half.

That means there are chances for those more intellectual debates, merely hinted at in these early quests. About the moral tug of war between Starfleet’s disparate missions — especially now that the player characters of Age of Discovery have been wrenched forward in both time and historical context — to flourish in ways they didn’t on the show. 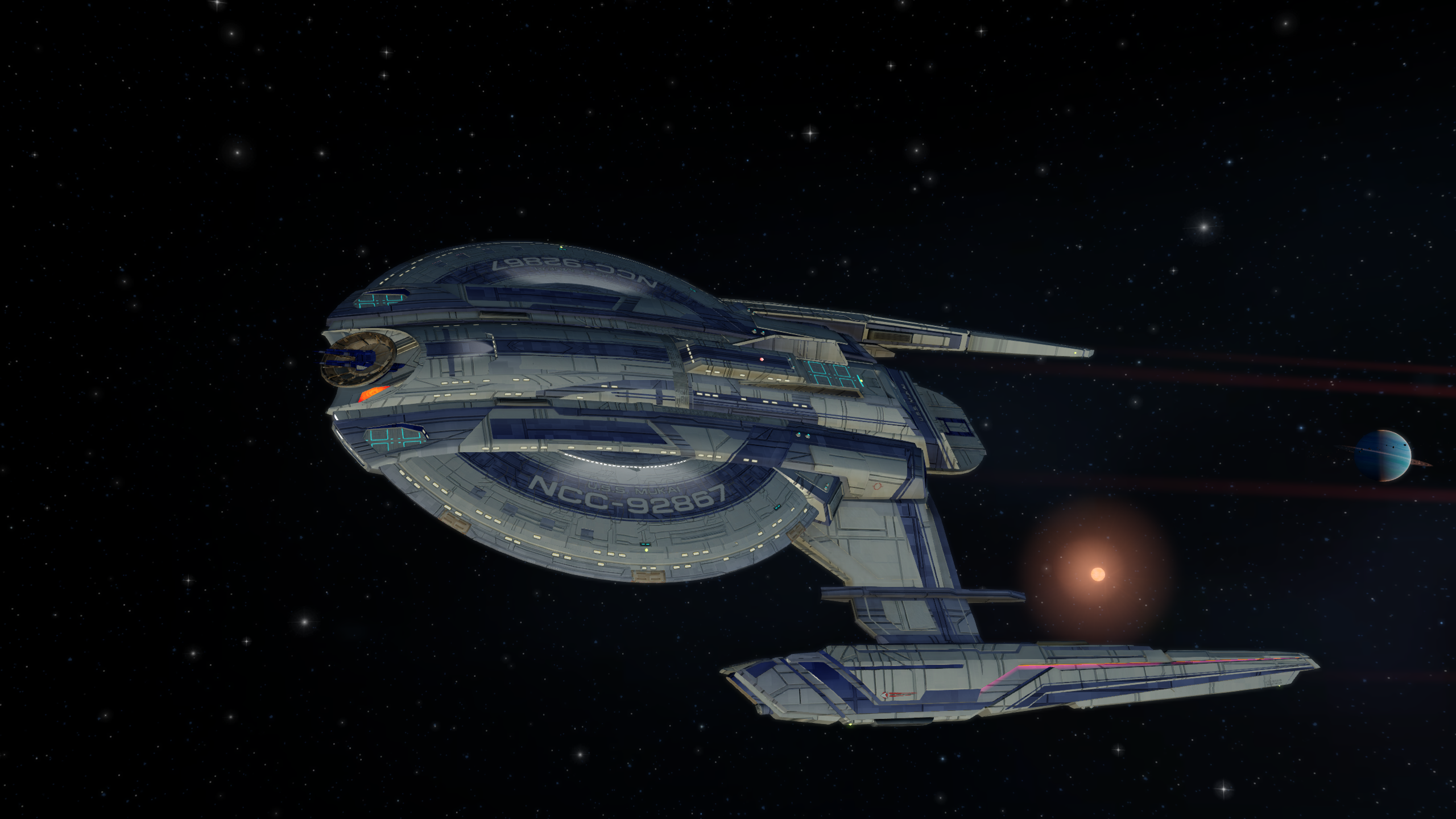 Sure, I had to watch my Captain get murdered by Klingons before my eyes and directly confront the horrors of Interstellar war. But hey, at least I got my own Walker-Class starship out of it! (Image: Cryptic Studios/Perfect World)

And that’s the beauty, in the end, of the promise of what Age of Discovery can do — it isn’t 15 episodes of TV that have things to do and certain characters to focus in on. It has the space to dissect these ideas, even as it does so in the constraints of having to give you, as a player, conflicts to fling photon torpedoes at rather than words.

If it can pull it off, or at the very least chase up on the threads it’s put down (something Discovery’s first season itself arguably did not), Star Trek Online might not simply do a great job of emulating Discovery — it might end up making it subject matter even better with its added context. All it takes is some time travel and a couple of centuries of hindsight, it seems.