In Ubisoft’s toys-to-life adventure, Starlink: Battle for Atlas, players are given access to a virtual (or physical) armada of starships and set loose in a gorgeous alien solar system, where they’re free to do the same seven or eight things over again until the game ends or they get bored.

The opening moments of Starlink set the stage for an epic science fiction tale that never comes to fruition. Astrophysicist Victor St. Grand and his team of crack pilots travel to the Atlas system to uncover the secret of a mysterious alien race.

Once they arrive, St. Grand is kidnapped by insectoid aliens known as the Forgotten Legion, who believe the human scientist is the key to harnessing ancient technology in order to gain control of the Atlas system.

It sounds exciting. For the first several hours it is exciting and something you may initially swoon over. St. Grand’s young protegee, Mason Rana, and his team find themselves stranded on an alien planet, their ships left with barely enough power to hover across the surface.

The ragtag band must make contact with local species in order to find a way back into space to search for their leader. There is tension and drama. They meet the Legion’s ground forces in combat, battling swarming imps and lumbering cyclopes. In order to harvest the special fuel used for their Starlink ships, they’re forced to take down a fiercely-guarded Legion control pillar.

Nintendo Switch players also get the start of a game-long sequence of quests involving Fox McCloud and his squad of anthropomorphic pilots from the fabled Star Fox franchise. Fox, Slippy, Peppy and Falco are on the hunt for the villainous Wolf when they run into the Starlink team and decide to join forces. Their specialised side mission and ongoing interactions are great stuff, to the point where I wouldn’t mind seeing Ubisoft handling a standalone Star Fox game.

The game’s strong introduction ends with a demonstration of one of Starlink‘s coolest features, the ability to seamlessly launch from a planet’s surface into space and hop to another planet, drop into its atmosphere and skim the surface without seeing a loading screen. In space, players can explore asteroid belts, battle raiders and fall into the occasional Legion trap while warping between planets.

It’s exhilarating, flying these magnificent mechanical beasts. Whether hovering across a planet’s surface or freely navigating open space, the ships of Starlink handle like a dream. The only time navigation gave me any trouble was during the mercifully rare platforming sequences in which my ship, weighed down by heavy cargo, had to do its best Mario impression to deliver goods to out-of-reach areas. Otherwise, piloting a starship never gets old.

The game sets up a pattern of repetition shortly after the exciting opening. A massive Legion creature known as a Prime is tromping across a planet, planting control towers as it goes. The mission to take down the Prime involves taking out not one, not two, but three control towers in a row. That’s three pitched battles involving clearing out enemies defending the towers, waiting for the tower’s weak spots to open and repeating.

Once the third tower goes down, players are pointed towards the Prime boss fight, which is another expose the weak spot and fire away affair.

The whole point of this mission is to teach players the relationships between the towers and the Primes. The more towers there are on a planet, the more powerful the Prime. Next we discover Dreadnaughts, powerful Legion capital ships whose power depends on how much control the Legion holds over nearby planets. 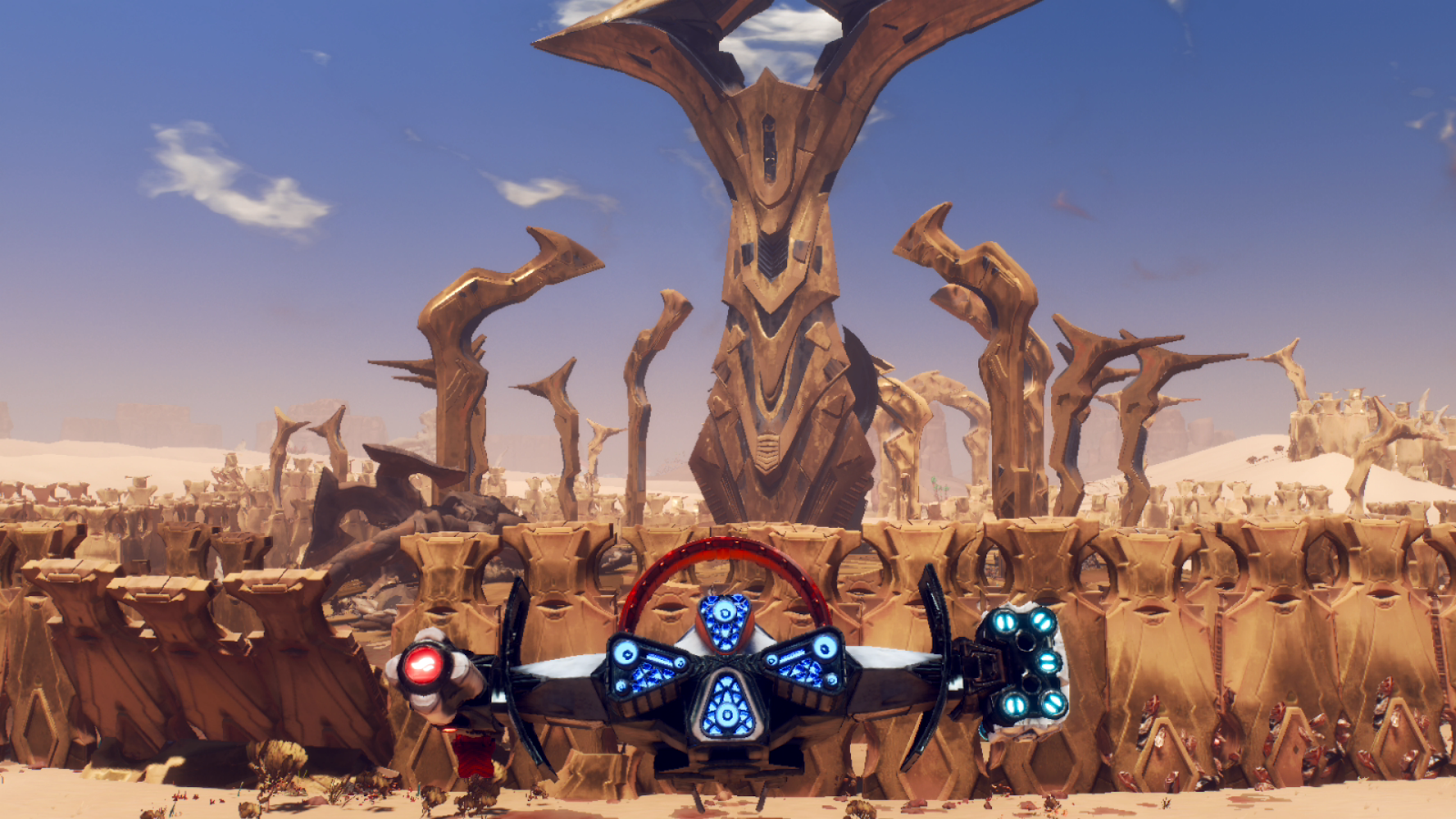 Finally we get a meter on the side of the screen for each of the game’s seven planets, showing the balance of control between the Legion and the Starlink Initiative. From there on out it’s a battle for control of the solar system. The player travels from planet to planet befriending existing outposts or building new ones, which provide cash, ship and weapon modifications and other important resources to the cause. The more allies the easier it is to take out the Legion towers, then the Primes, then the Dreadnaughts. 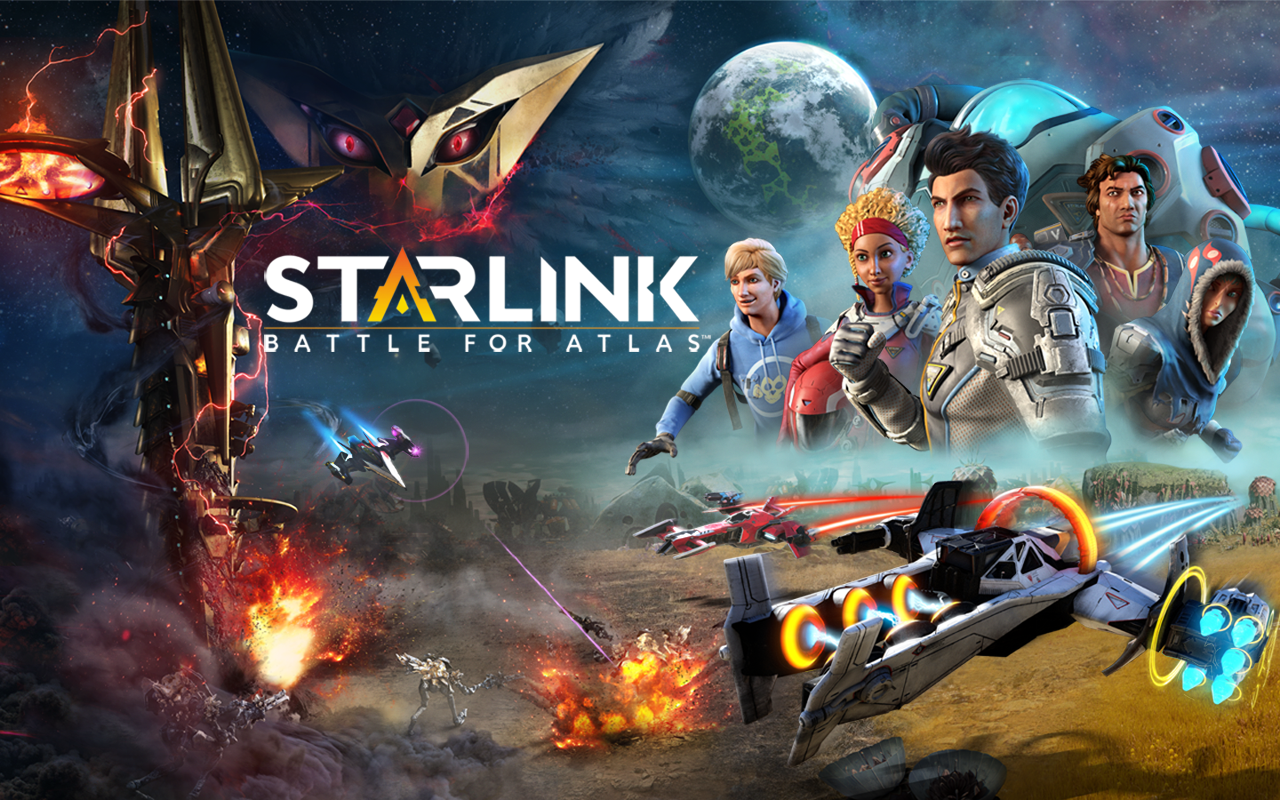 'In space, no one can hear you sigh.'

Game starts out exciting and then devolves into a series of repetitive tasks.

Played opening hour on all three platforms. Played Switch version for Star Fox mission. Completed game on PlayStation 4. Bought all of the toys, because I love spaceships.

It’s a samey grind spread across seven breathtakingly beautiful alien worlds. It doesn’t matter if I am on the desert planet, the ice planet, the fire planet or the dark and broody planet (it’s called Necrom). My objectives are the same. Make friends, destroy towers, destroy Primes.

It doesn’t help that almost every enemy is one of three Legion species — imps, cyclops and giants — differentiated only by their elemental attack types. Bandits occasionally attack outposts or ambush the player during space travel, but they’re little more than a distraction. 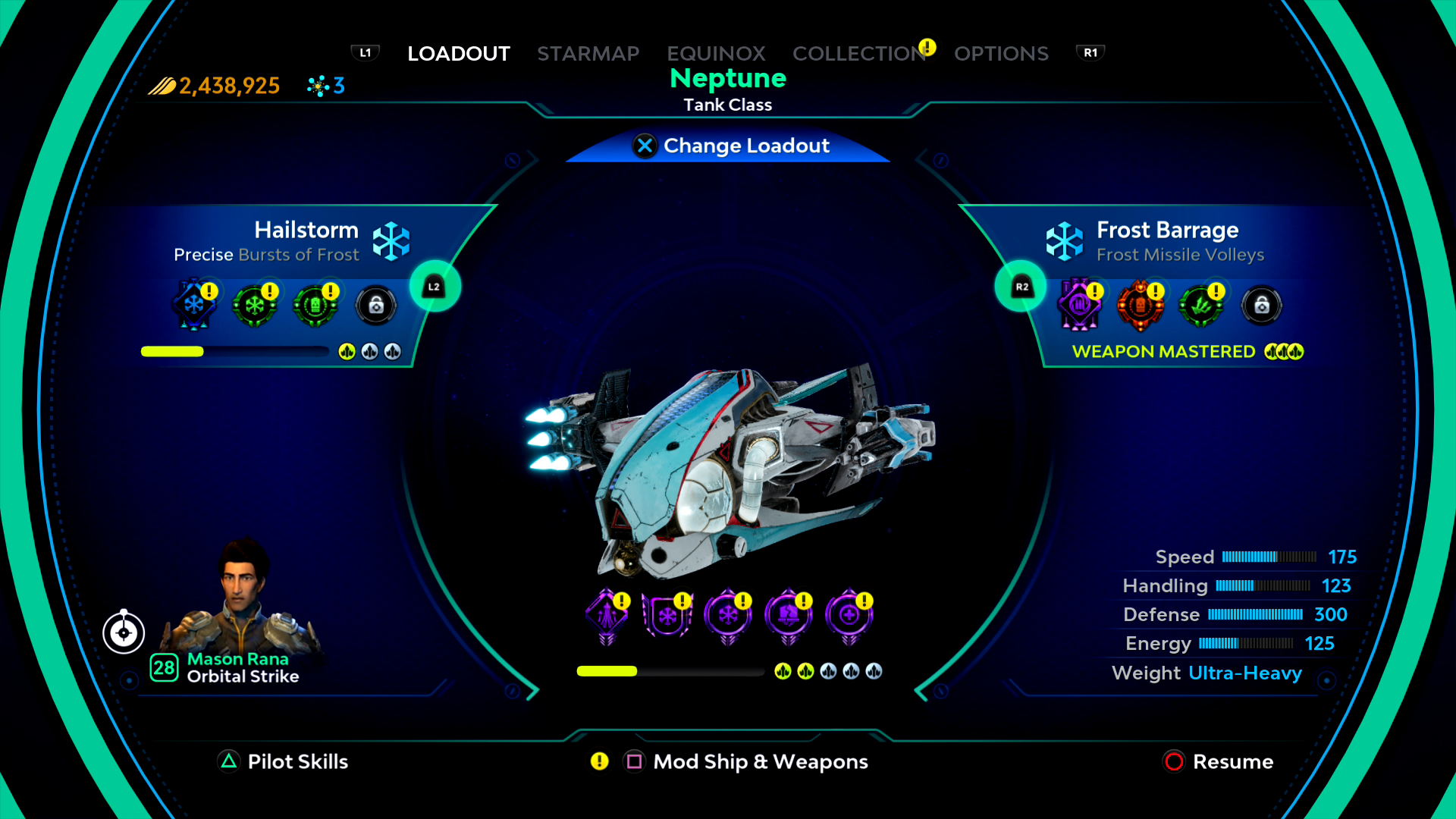 That’s not saying battles are unwelcome. Any alien aggression is an excuse to play around with Starlink‘s modular weapon system. As of launch there are 16 weapons to purchase physically or digitally, each falling into an elemental category (ice, fire, void, kinetic, stasis). Combining weapons of differing elements can create some spectacular effects. A void weapon and an ice weapon create a swirling stationary winter storm. Fire and ice together can send enemies into elemental shock, stunning them temporarily. 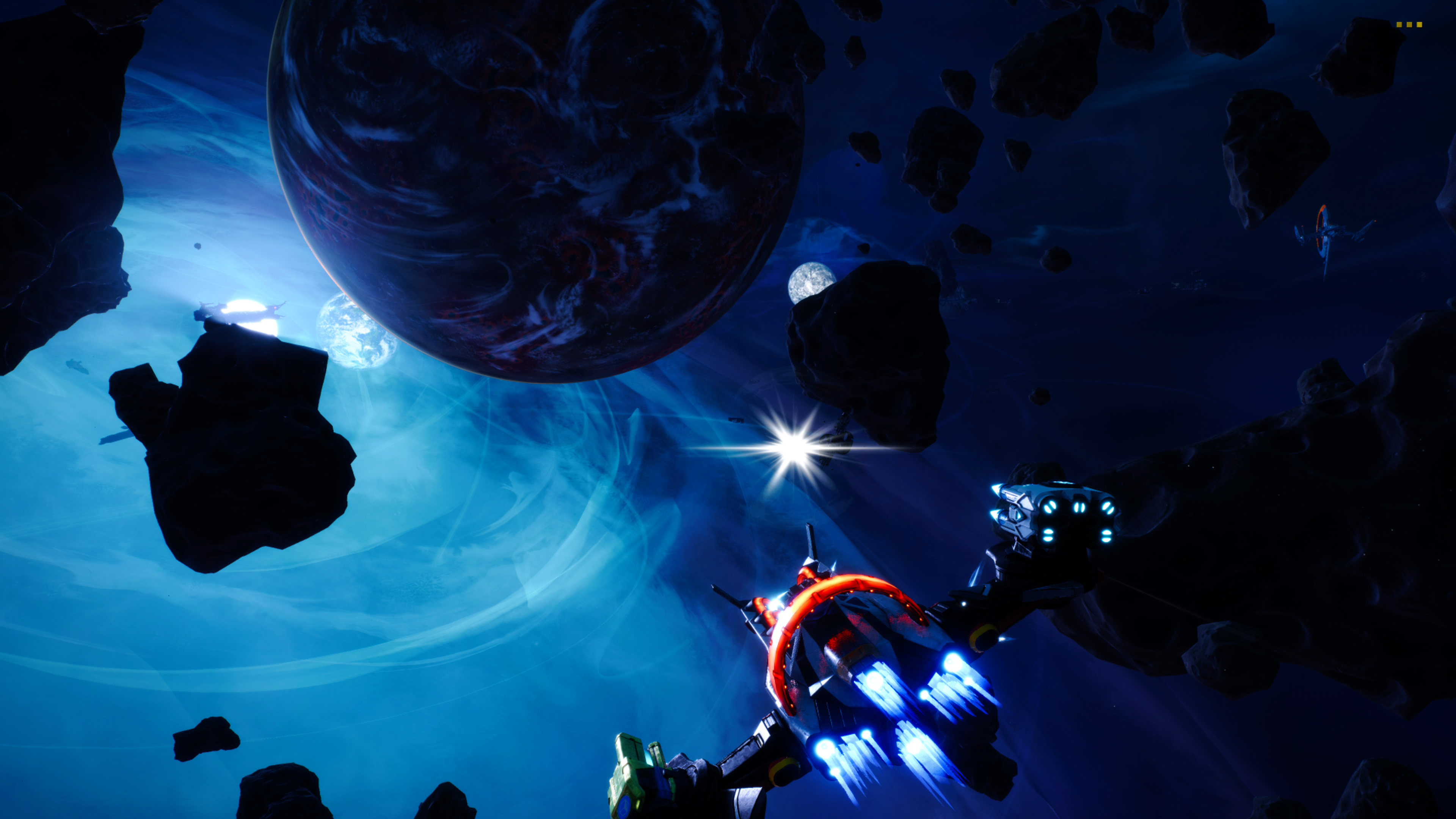 Space is all sorts of peaceful when you aren’t being shot at.

The game also features an extensive modding system, allowing players to collect and combine modifications to make weapons and starships more powerful. Experimentation pays off in Starlink. Finding the right combination of pilot, ship, wings (which are modular and can be swapped and combined) and weapons can make a challenging battle a breeze.

The modular nature of Starlink: Battle for Atlas‘ arsenal is the most satisfying aspect of the game. Whether hitting pause and changing loadouts digitally or snapping weapons onto plastic starships connected to the controller mount included with the physical version of the game, Starlink affords players a satisfying level of control. 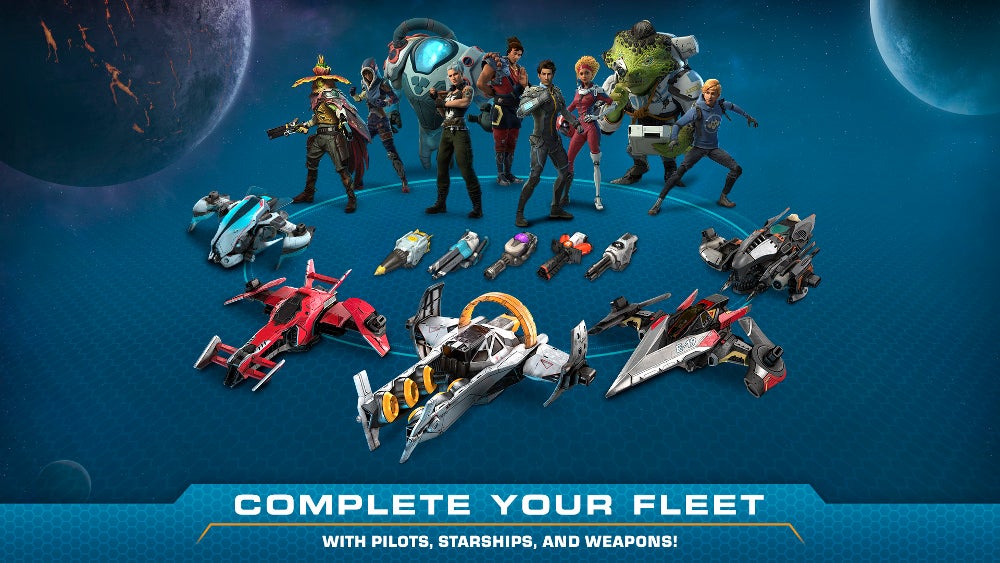 Ubisoft sent a handful of ships and weapons for review. I bought the rest.

I just wish there was more to do. I’ve played for nearly 20 hours, building up the Starlink Initiative’s reputation enough to take on the game’s completely forgettable final battle. I followed the game’s narrative as it slowly fell apart, puzzling over characters in the final cutscenes I swear I never encountered in the game. And now I’m left flying around Atlas, tasked with destroying tower and Primes and Dreadnoughts until the star system is 100 per cent on my side.

I might accomplish that. I do enjoy the flying and shooting. Maybe if I take it slow.