Next week, the excellent Spider-Man game for PS4 is getting its first piece of downloadable content.

It’s a new mission that brings Felicia Hardy, the Black Cat herself, back into Peter Parker’s Spandex-clad life. But it’s bringing with it even more costumes, if you can believe it, including a pair right out of the comics.

As revealed by Sony today, The City That Never Sleeps: The Heist will add another three suits to the cornucopia of costumes already in the game.

One, like Adi Granov’s Velocity Suit in the base game, is an all-new design. But it does have a link to the comics in that it’s designed by a Marvel Comics artist—in this case, Gabriele Dell’Otto, who made the very angular, and very shiny “Resilient” Suit you can see in the middle of the three costumes: 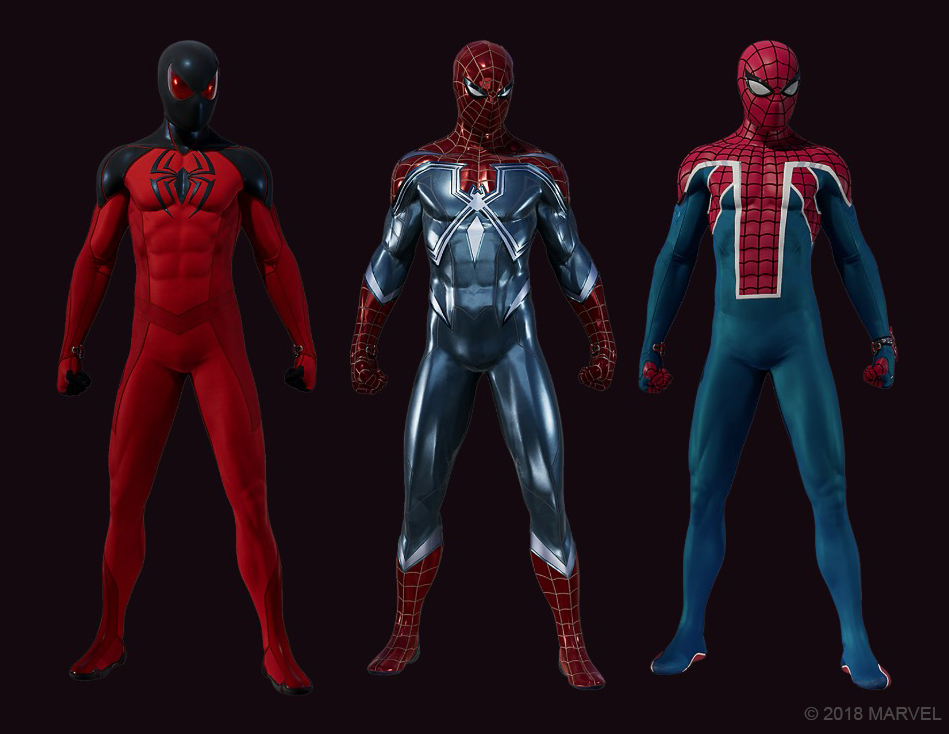 But the two suits that flank it are right out of the comics, old and more recent—and they’re both, interestingly enough, worn by Spider-Heroes who aren’t Peter Parker. Here’s a quick little guide to them both! 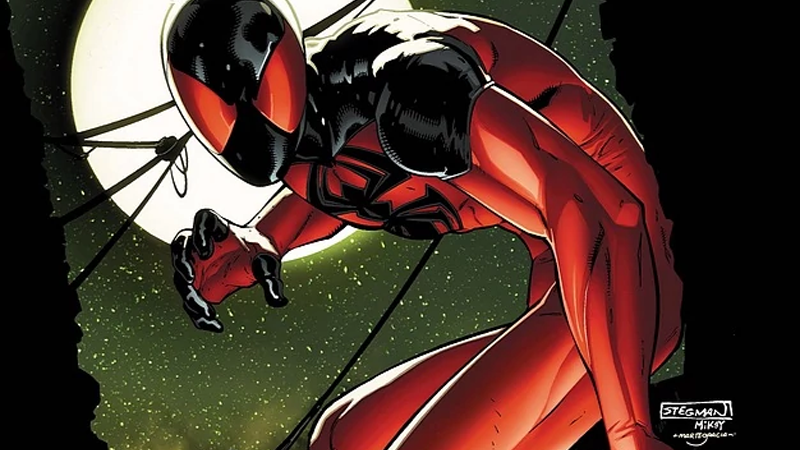 Not to be confused with the Scarlet Spider costume already included in the game—worn by Ben Reilly who…ah jeez, let’s back up a sec already. So, Ben Reilly: clone of Peter Parker, star of the infamous Clone Saga, recently returned as a villain-turned-sorta-deranged-anti-hero in the wake of Clone Conspiracy.

But! He wasn’t the first clone of Peter Parker created by Miles Warren, the sinister villain known as the Jackal. Kaine was actually Warren’s first Parker-clone, but created with an imperfect process that left Kaine’s genetic material—and his mental faculties—degrading. His debilitating disease, as well as Warren’s total rejection of him, lead to Kaine striking out on his own and getting embroiled in the mania surrounding both Peter and Ben during the height of the Clone Saga.

Incredibly long story short: An increasingly deranged Kaine stalked Ben Reilly, who (along with Peter and the rest of the world) was lead to believe that he was the real Spider-Man and not a clone, which had him taking on the mantle for a period.

Kaine, meanwhile, killed a bunch of people in his mania and tried to pin it on Ben as vengeance for Peter (who Kaine thought was a fellow clone), leading to Peter getting thrown in jail (because DNA from the crime scenes matched his!) and eventually all three Parker brothers duked it out to find out the truth of their connection.

But there was more deception seemingly re-affirming Ben as the true Spider-Man, and Kaine seemingly perishing helping Ben battle a fourth Peter clone, Spidercide. The Jackal saved him and nursed him back to health, because comic books.

Many years later, long after Ben was revealed as the true clone and had seemingly perished, the returned Kaine adopted Ben’s old Scarlet Spider mantle and became a hero operating in Houston. He occasionally shows back up in Peter’s life for events like Spider-Verse and so on. 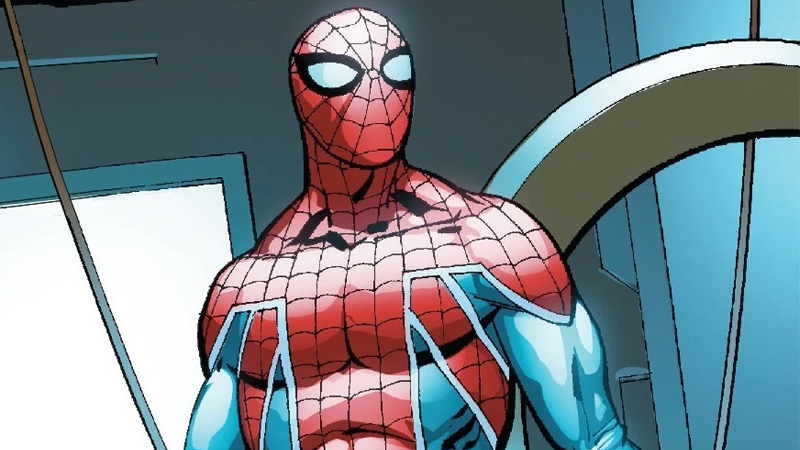 2014 crossover event Spider-Verse, Spider-UK—a.k.a. Billy Braddock—came from Earth-833, and represented his reality in the pan-dimensional collective of British heroes in the Captain Britain Corps.

He was one of the first Spider-heroes to realise that his counterparts in other realities were being killed off by the Inheritors, and while his superiors were more concerned with the problem of entire parallel realities being destroyed, Billy was tasked with teaming up with his fellow Spiders to protect themselves from annihilation.

His powers were a bit more than having a fancy accent though; as a member of the Captain Britain Corps and the Spider of his universe, Billy has both the abilities of a Spider-hero and the enhanced strength, agility, and even flight powers of Captain Britain.

Alas, Spider-UK is coming to Marvel’s Spider-Man at an unfortunate time. Since his debut in Spider-Verse, Billy has gone on to helm the interdimensional team of Spiders known as the Web Warriors, safeguarding the multiverse of webhead heroes from future cataclysmic threats.

However (spoiler alert!), in last week’s Spider-Geddon #1—a sequel to Spider-Verse – the poor guy met his untimely end thanks to a sneak attack from one of the restored Inheritors, who snapped his neck. 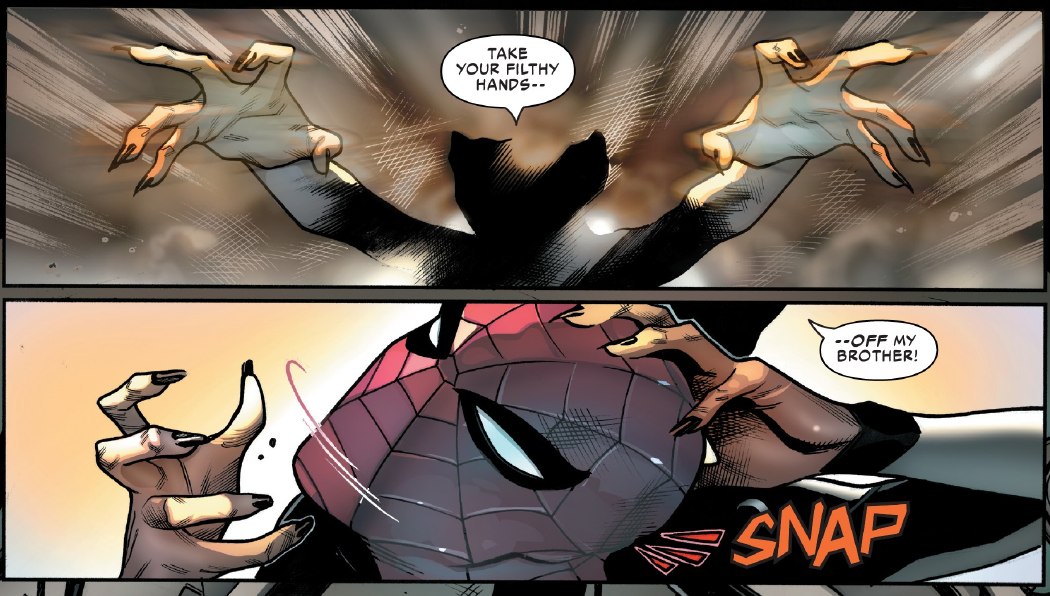