The beauty of Spider-Man is that there are so many interpretations of the character across a myriad of mediums—Spiders-men, women, kids, hams, and so on. The latest of them, the Peter Parker starring in Marvel’s Spider-Man, is a fascinating take on the character. But his comic book debut just made things a whole lot more interesting.

Actually, consider this a double spoiler warning, because below are details of both Spider-Geddon #0 and the ending of the Spider-Man video game. Consider yourself doubly warned!

It’s set shortly after the events of the game’s story, which is why it becomes so intriguing. Not only is this the chance to, at least character-wise, get a momentary continuation of arcs left open at the end of Spider-Man’s rollercoaster of a story, it means that the collision of his world with the world of the Spider-Verse suddenly becomes weirdly emotional. 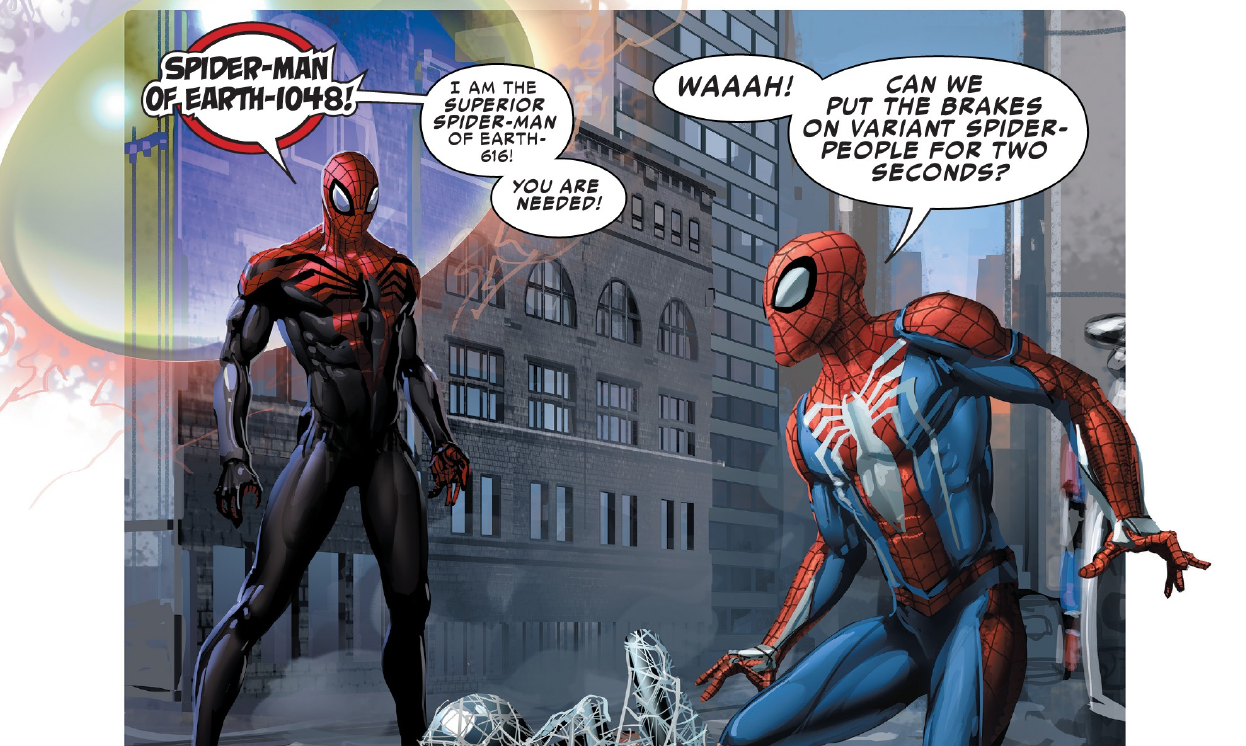 Jeez, Pete, if you think two Spider-Men is a lot, just wait for the rest of this event! (Image: Clayton Crain and Travis Lanham, Marvel Comics)

Why? Because after the story opens with Peter being introduced to his reality’s version of the classic Spidey villain Tarantula, Pete finds his scrap interrupted by a herald from another world, beckoning him to fight along the Spiders of all realities against a cataclysmic force that could doom them all … the Superior Spider-Man.

Better known, of course, as none other than Otto Octavius—formerly in the body of the actual Earth-616 Spider-Man, currently in his own tip-top super special clone body courtesy of … well, it’s a really long story that can basically be summed up as comic booooooooks.

But anyway, it’s Otto Octavius, the former Doctor Octopus, now currently hell-bent on proving that, once and for all, he is the Superior Spider-Man to Peter Parker.

But that doesn’t really matter to this Peter, because he is a Peter who, shortly before this interloper showed up, fought his own version of Otto Octavius—his tragically twisted mentor, employer, and friend—after he became the man Otto-616 used to be. 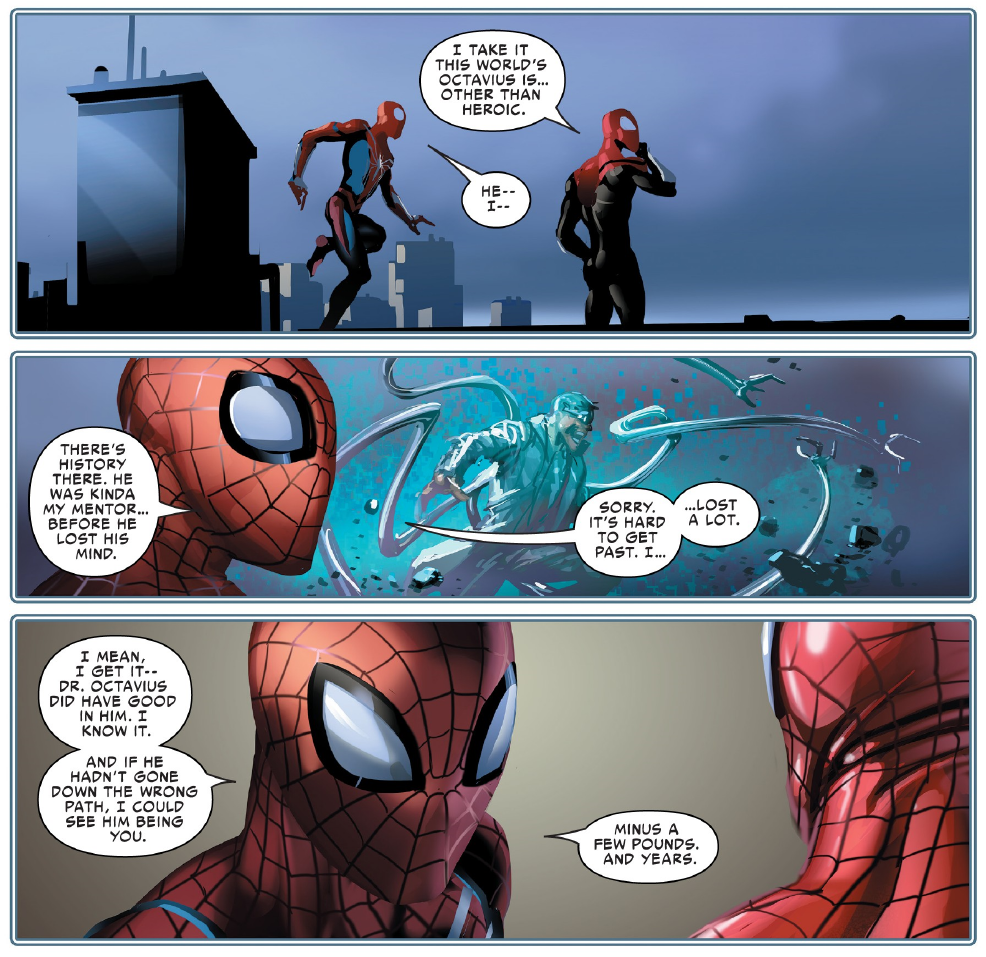 It’s a deliciously dramatic premise that, even in a short space of time, Spider-Geddon #0 mines for all it can. There’s heartbreak on both sides; of course Peter is heartbroken when Otto reveals his identity not just because the memory of his fallen mentor brings back raw emotions, but because in the Superior Spider-Man he sees the man his Otto could have been if his failing body hadn’t driven him down a dark path.

The Otto of Earth-616, upon learning of his counterpart’s fate, is haunted by his downfall—and, acknowledging that his body failing him way back in Amazing Spider-Man #700 lead him to where he currently is, has him vowing to never let it befall any Octavius in the multiverse again.

With Peter hesitant to leave his duty as New York’s hero, or his support network in Miles and MJ behind, and Otto as brusque and impatient as ever to recruit Spiders in the fight against the inheritors, they briefly almost come to blows—a seemingly inevitable moment given the weird history these two share with their alternate counterparts in the multiverse.

But it’s one made even more heartwrenching in a quiet admission by Peter: coming to blows with Otto Octavius instead of saving the world with him is an all-too-familiar scenario. 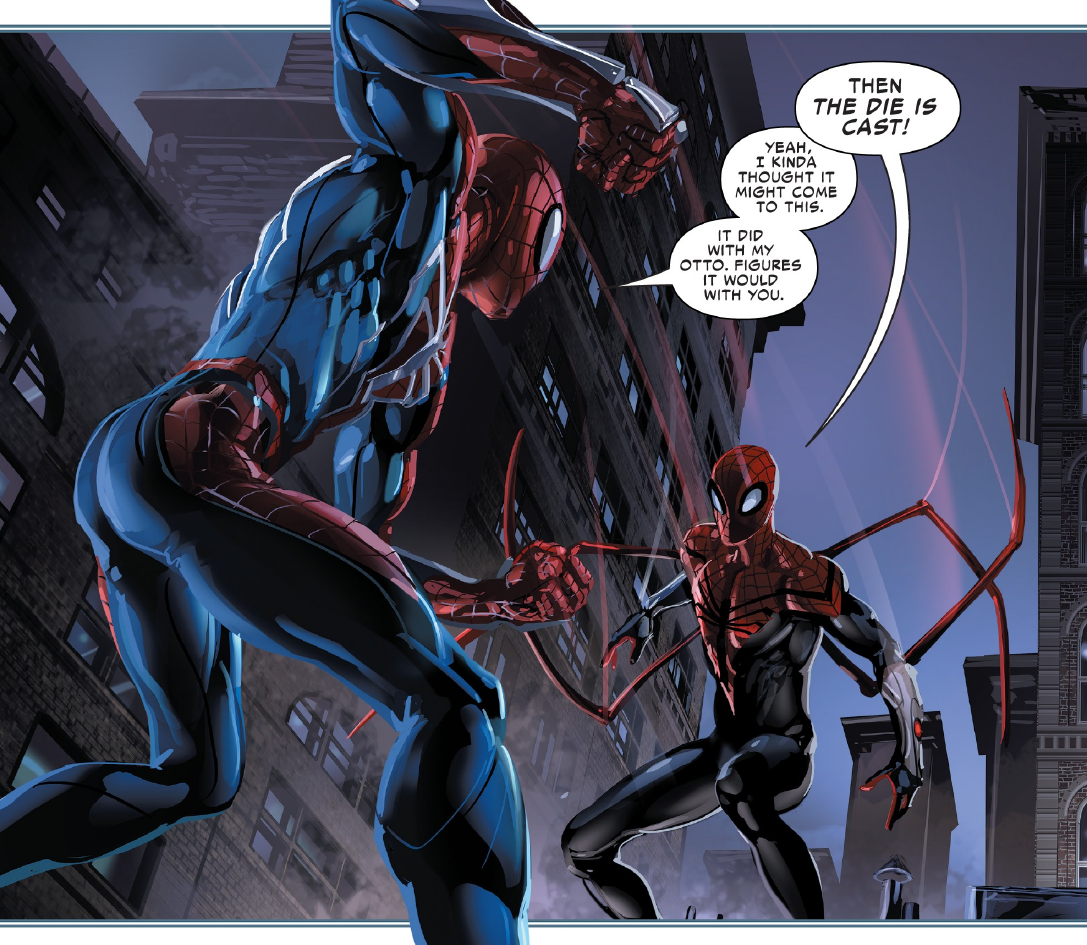