Transistor Sings On The Switch

switchtransistor
Facebook may have decided that you shouldn’t see the news, but we think you deserve to be in the know with Kotaku Australia’s reporting. To sign up for our daily newsletter covering the latest news, features and reviews, head HERE. For a running feed of all our stories, follow us on Twitter HERE. Or you can bookmark the Kotaku Australia homepage to visit whenever you need a news fix.

I loved Transistor when I first played it on PC, but I struggled with some aspects of the game. The combat system, while interesting and creative, was sometimes tedious to control. On the Switch, the game feels more cohesive.

In Transistor, you play as Red, a singer who has lost her voice. Plus, her boyfriend has been trapped in a sword shaped like a giant USB stick called the Transistor. You’re on a quest to figure out how to get your voice and his body back as the city you both live in is being destroyed by something called The Process.

Using the Transistor, you can fight the Process using a variety of attacks, and also by pausing time to plan out what you want to do and executing it faster than your enemies can respond.

In theory, that sounds like an interesting puzzle for combat. In practice, at least on the PC version, that design usually led to me pausing time, hitting a bunch of enemies with the same move over and over, and then running around until my moves recharged.

On the Switch, it feels less fiddly overall.

In both docked and handheld mode, I felt like it was easier to make Red do what I wanted, thanks to your aim snapping to enemies, and, surprisingly, a little bit of vibration in the Joy-Con whenever I planned a new move. It made it easier to plan moves more efficiently when I knew I was going to hit my targets, and that little bit of feedback kept my brain awake. Boss fights that I once struggled with sometimes felt a little too easy.

It’s not surprising that the game feels so finessed on the Switch, since the original game came out in 2014, so development studio Supergiant Games has had time to perfect the control scheme for this version. I was surprised by how much easier it was. In my original playthrough, I never once touched the Limiters, which are an in-game combat challenge setting that you can apply which will award you with more experience points.

Some of them reduce how many moves you can use; one makes enemies hit twice as hard. In this go around, I had three Limiters on, and even by the final boss I considered adding another to up the challenge. 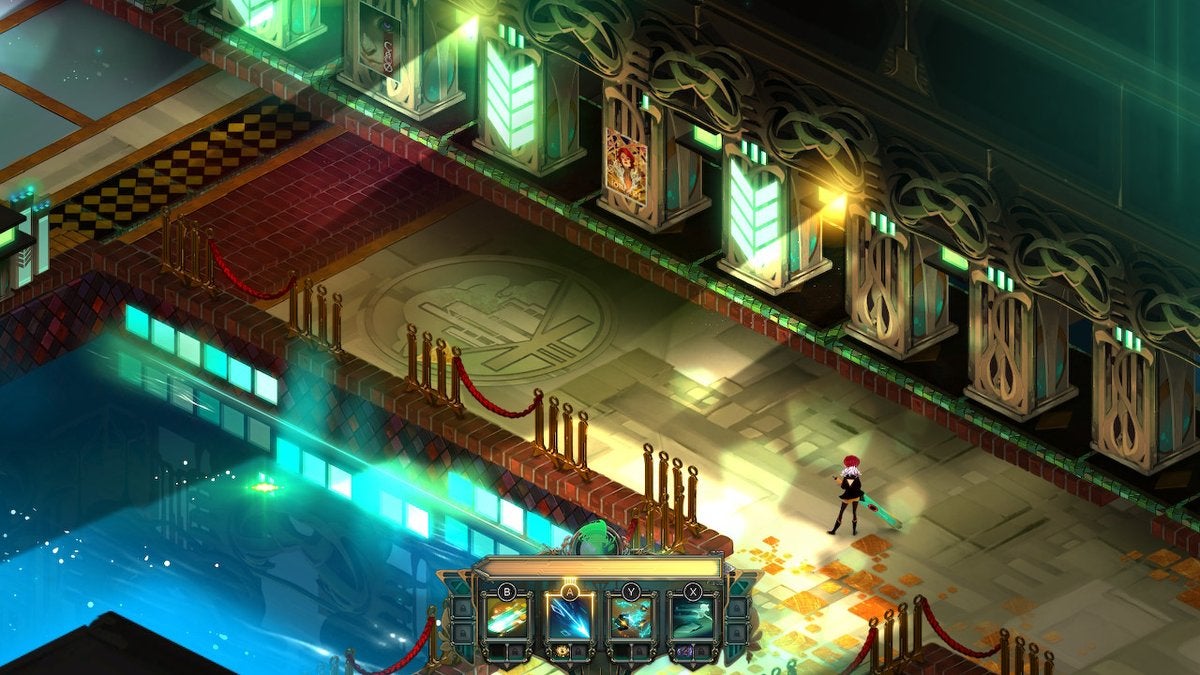 Because playing Transistor on Switch fixed my one gameplay problem, I noticed some of the game’s other issues more. It’s still got a confusing story, and even though fixing the gameplay makes it easier to access other parts of the game’s lore, it is all still delivered in a cumbersome way. Each move you use with the Transistor is linked to a major or minor character from the city.

To find out that character’s background, you have to use their move in an Active slot, which is your main move slot, as well as an Upgrade slot, which modifies a move to give it additional powers, and finally, in a Passive slot, which gives you a passive skill like recharging health or spawning a copy of yourself to distract enemies.

In the course of a single playthrough, you’re probably not going to be able to use all your moves in all these slots, meaning that you might roll up to the final boss without being quite sure of what’s going on. Hell, I’m still not quite sure about everything that happens in Transistor, and I’ve now played it twice.

On the other hand, playing the game more than once may feel like less of a chore now that the combat is overall easier. I found that I was more inclined to take risks with what moves I chose because I didn’t feel like I was fighting with the combat system as much. All of Supergiant Games’ signatures – the beautiful art and music – shine just as brightly in this version of the game. In docked mode, I really appreciated seeing all that art on my big TV.

If I were to play the game a third time, I would definitely choose this version rather than the PC build.

If you haven’t played Transistor, you should just get it on whatever platform you can, though the Switch version is a strong choice. If you have played it, getting it again depends on whether or not you liked the combat system in its original versions.

I felt more inclined to explore the game’s challenges playing on Switch because the game finally clicked for me. It’s amazing what a change of scenery can do.