gamestmgaming magazinesIn Real LifeMediaprint
To sign up for our daily newsletter covering the latest news, features and reviews, head HERE. For a running feed of all our stories, follow us on Twitter HERE. Or you can bookmark the Kotaku Australia homepage to visit whenever you need a news fix.

UK gaming magazines GamesTM and GameMaster will publish their final issues next month, owner Future Publishing announced today. This news hits close to home for me as someone who used to read GamesTM and has always loved the feel of a nicely weighted, glossy gaming mag.

“Despite the company’s strong performance overall, unfortunately games™ and GamesMaster are no longer profitable parts of the business, which means that their next issues, on sale November 1, will be the final editions,” Future told GamesIndustry.biz in a statement. The staff will apparently be “redeployed” across other parts of its business.

Over at GamesTM‘s Twitter page, the magazine’s current staff wrote: “We’re proud to say that gamesTM leaves as it entered; fiercely independent unrepentant, forthright, unwavering, driven, curious, passionate and above all else made by a small team of gamers who love that they get to do this for a living.”

GamesMaster, with which I’m less familiar, began publishing 25 years ago, but GamesTM‘s history began more recently in 2002 — a bizarre and belated time period to start a brand new print publication, perhaps, but a welcome sight nonetheless.

While the print gaming landscape was hollowed out many years ago in the US, the UK’s suite of gaming magazines, most of them owned by Future, continued on through the 2000s. As Official US PlayStation Magazine, Electronic Gaming Monthly, Game Pro, and Nintendo Power all started folding around that time, the likes of GamesTM and Edge provided welcome substitutes. (Game Pro and Nintendo Power made it the longest, ending in 2011 and 2012 respectively). 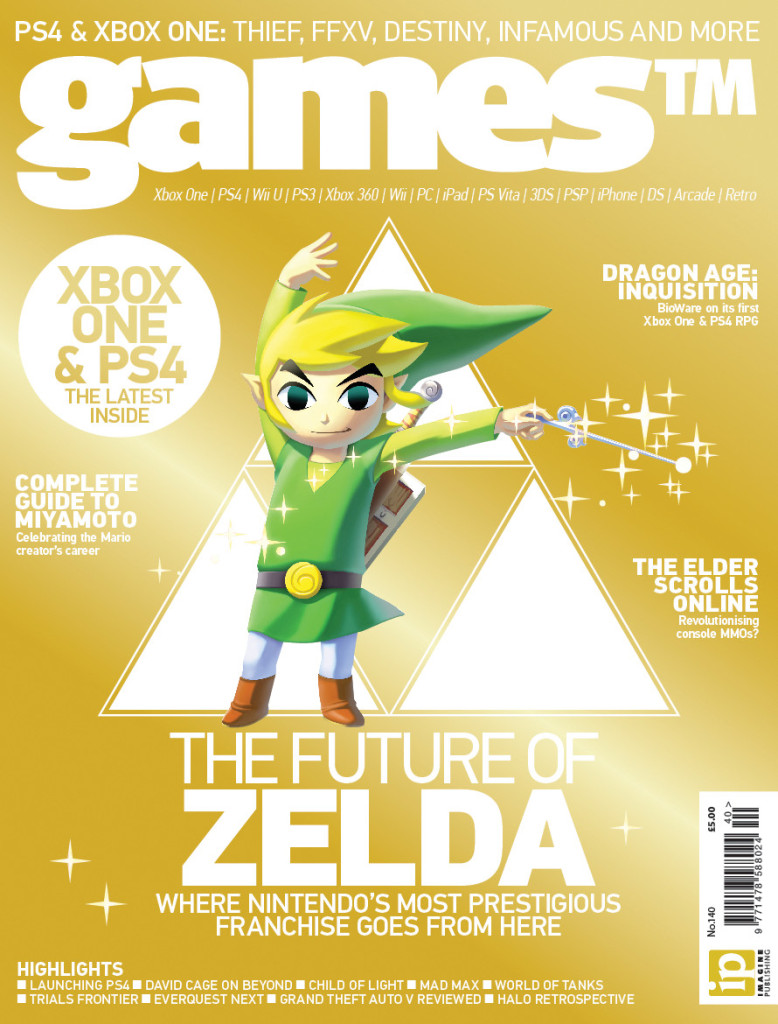 Issue 140 of GamesTM was published in October of 2013. (Screenshot: GamesTM)

For me, these magazines were more expensive and had to ship across thousands of kilometres, but they offered all of the idiosyncrasies of reading about games in print: beautiful layouts, interviews with big names, and more in-depth reports on larger trends that didn’t always fit in with what games writing on the internet was doing in the 2000s and early 2010s.

I wasn’t and never did become a regular subscriber, but I remember occasionally walking into a Barnes and Noble or Borders, back when those still existed, and picking up one of the large, shiny booklets on impulse. For several years, my brother would buy me the latest GameTM issue for Christmas. I still have the 140th issue with Link from The Legend of Zelda: Windwaker plastered on top of a gold cover sitting on the shelf in my room.

The physical medium has other advantages too. It bundles stuff behind a subscription in a seemingly more organic way than online media, for which paywalls have always felt like an awkward fit. On the internet, each piece of content lives and dies predominately on its own. In a magazine, stories are bound together and their value can be reflected in the quality and curatorial strength of the overall package.

Edge continues to exist in print form, at least for the time being, as do other game-related magazines in Future’s portfolio, like PC Gamer and Retro Gamer. Given how fraught the media industry continues to be, though, their days seem numbered as well. In the US, there’s still Game Informer, a magazine owned and published by Gamestop; the store includes a subscription to the print magazine as part of its loyalty program.

Three years ago, the magazine was redesigned to be slightly smaller with lighter paper. At this point, it’s begun to feel like a relic from another era, along with Gamestop itself, as it continues down an uncertain path filled with the increase of digital game sales and hedge funds circling like vultures overhead.

Fortunately, print doesn’t just disappear when it gets closed down. Even if we won’t be getting any future issues of GamesTM and GameMaster, there will always been the physical remnants for people to read, exchange, and preserve. Guess I’ll have to buy a nice frame for my Windwaker issue.