What We Absolutely Loved About Castlevania Season Two

The first season of Netflix’s Castlevania animated series was pretty good, if a bit rushed due to a four-episode length. The second season expands with more episodes, more characters, and some amazing fight scenes.

Staff writer Heather Alexandra and senior reporter Mike Fahey sat down to talk about how much they loved the new season.

Heather Alexandra: Mike! We are here today to talk about the latest season of Netflix’s Castlevania. I think it’s safe to say that we both enjoyed last season, even if I was disappointed with how short it was. We have double the episodes this time and a lot more characters. For my part, I really liked this season and found it a huge step up. What’s your immediate reaction to season two?

Mike Fahey: The first season was certainly short and very focused on a small group of characters. Now that I’ve watched season two, that first set of episodes feels like a prologue, or the opening band. We’ve tested the waters, now we’re diving.

Alexandra: Yeah, the first season took a lot of time introducing us to the core cast: Trevor, Sypha, and Alucard. Season two really expands outwards; there’s the world of the vampires, tons more history about the Belmonts, some romance, and a lot more time on Dracula himself.

But because it’s not crunched into a handful of episodes, it never feels rushed. I wanted to ask about those first folks. How about those vampires, eh? GODBRAND!

Fahey: Wait, there were more vampires than GODBRAND!? I feel like we have to capitalise his name whenever possible. Which elder vampire looked at this hard-drinking, screwing, boat-building viking and thought, “Yeah, he’d be a good addition to the fam.” They used “fam” back then.

He’s one of my favourite things about the new season, even if he’s not as important as Carmilla, the femme fatale who always left me craving caramel and chocolate.

Alexandra: They’re a good balance to each other. One is this loud and wild dude who just wants to drink blood, and the other plays the political game. It’s two sides of the vampire coin. We get some bloody decapitations but we also get subtle manipulations.

You know what surprised me? They have Hector and Isaac in this! Two characters from the Playstation 2 games! 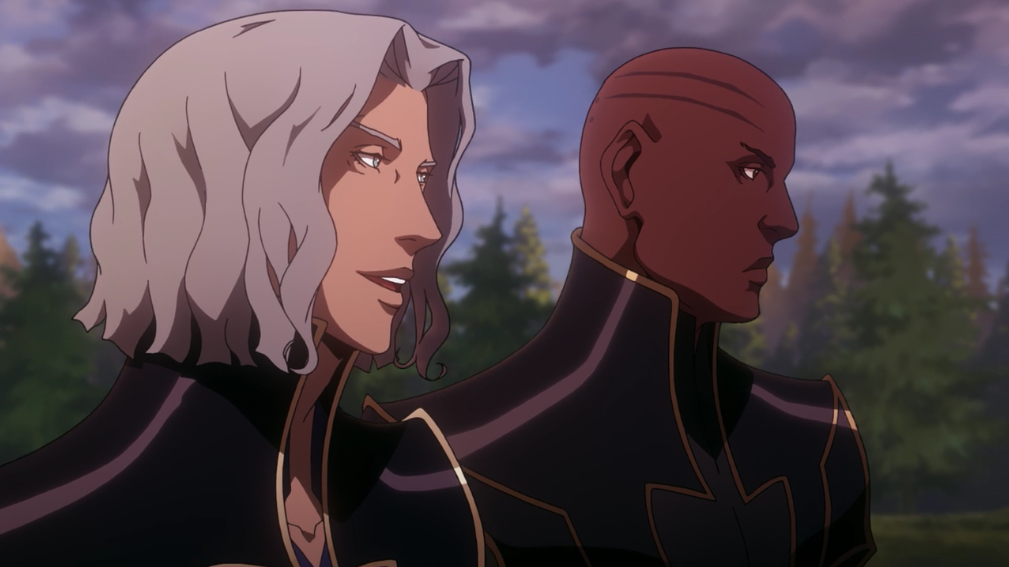 Fahey: Curse of Darkness, right? Threw me for a loop there, they did. I figured we’d see maybe one of them in a cameo or something, but we got both of the forgemasters in very significant roles. In fact, none of the newly-introduced characters—not counting the vampire council fodder—were wasted here.

Alexandra: Also, Isaac isn’t wearing his leather daddy pants. But yeah, it was interesting to see them added to the cast and nice that they were treated like people with actual motivations beyond being evil. It changes a bit – Hector’s a flat-out hero in the games – but it adds some complexity to the cast. Plus, we get cute undead puppies thanks to Hector’s forgemaster skills.

Fahey: Where is my undead puppy plush? Was it me, or did we spend much more time with the vampires than we did Trevor, Sypha and pouty teen goth boy this time around?

Alexandra: I think we might have, but the trio gets some fun stuff too. Trevor and Sypha are flirty, Alucard gets to brood but also act a bit like a teenager by snipping at Trevor. In the first season, it was all “Go here! Do this!” There’s still some of that, but there’s extra time for them to goof off.

Sypha wanting to call Trevor “Treffy” is the most adorable thing. And we never would have gotten that in season one. 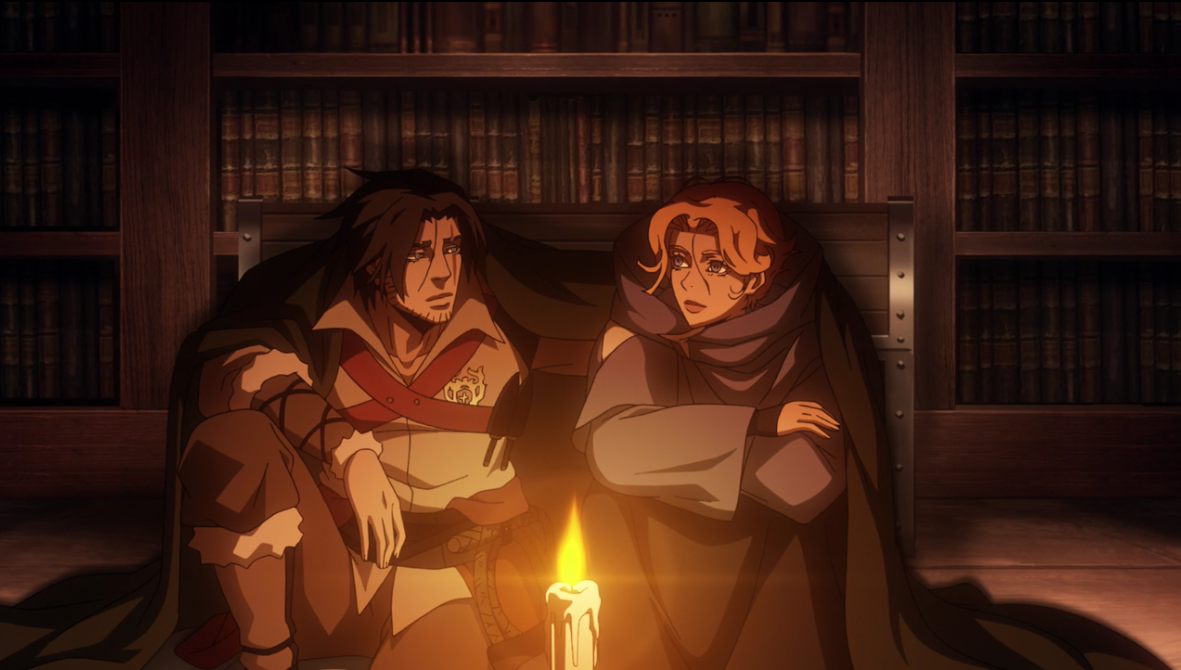 Fahey: I suppose sitting the three of them in a library to do research for what, five of the eight episodes, did allow time for some character development. The sniping between Alucard and Trevor got a bit much in later episodes, but the first couple of swipes were perfect.

“Eat shit and die.” “Yes, fuck you.” And the delivery of the lines … just brilliant.

Alexandra: I think the library stuff pays off between those small moments and the big, blood beatdown that Trevor gives all the monsters that arrive. Because, damn, the fight scenes are great. They always were, but I feel like they’re even better this time.

Fahey: Trevor’s battles were outstanding, but for my money the best beatdown of the season was Sypha using her ice against that one biter during the final showdown. That was inspired magical battle choreography.

Alexandra: I straight up got chill when they started playing “Bloody Tears” before that fight.

Fahey: I teared up a little. This is an adaptation that really knows its stuff. The characters, the setting, the music. It gets us.

Alexandra: There’s a ton of detail in that fight but it’s also creative. You mention Sypha’s ice magic—they could have just made her chuck icicles but she’s using them to deflect attacks, making that big sheet and then using it to slice that dude.

I’ve been thinking a lot about Alucard leaping in and punching folks while his sword zips around.

Fahey: It’s just so casual and effortless. There goes Alucard. There goes his sword. People dying. And while we’re talking about spoiler alerts, they managed to make Alucard’s fight against the rabble look easy; they turned around and made it feel like he was really struggling against his father.

The base in my sound system went nuts with every hit between those two.

Alexandra: That fight is brutal. In general, this season does a really good job with Dracula. Both as a character but also as, I guess, the big, final boss.

Fahey: But the true star of Castlevania is the castle. Leaping violently from street to river, decimating entire armies via blessed tsunami, proving what an absolute magical powerhouse Sypha is. I love that castle so much.

Fahey: To quote Carmilla, “What the fuck just happened?”

Alexandra: So we get all that fighting. “Bloody Tears,” giant castle, Carmilla betraying everyone, Alucard vs. Dracula, and badass magic. It feels like the season could have ended there, but it gives us an entire epilogue episode that I was really grateful for.

Fahey: Wasn’t that lovely? We don’t get enough epilogues these days. It’s almost like a “Next season on Castlevania,” only an entire 28 minutes. Plus I am pretty sure we got Gideon Emery, voice of my Destiny 2 boyfriend Devrim Kay, as the leader of the bandits harassing Isaac.

Alexandra: Bandits that Isaac truly and utterly fucks up before starting to create his own undead army. And yet! The season ends quietly. Alucard, all alone, weeping after everything that’s happened. Not what I was expecting, but it makes sense. 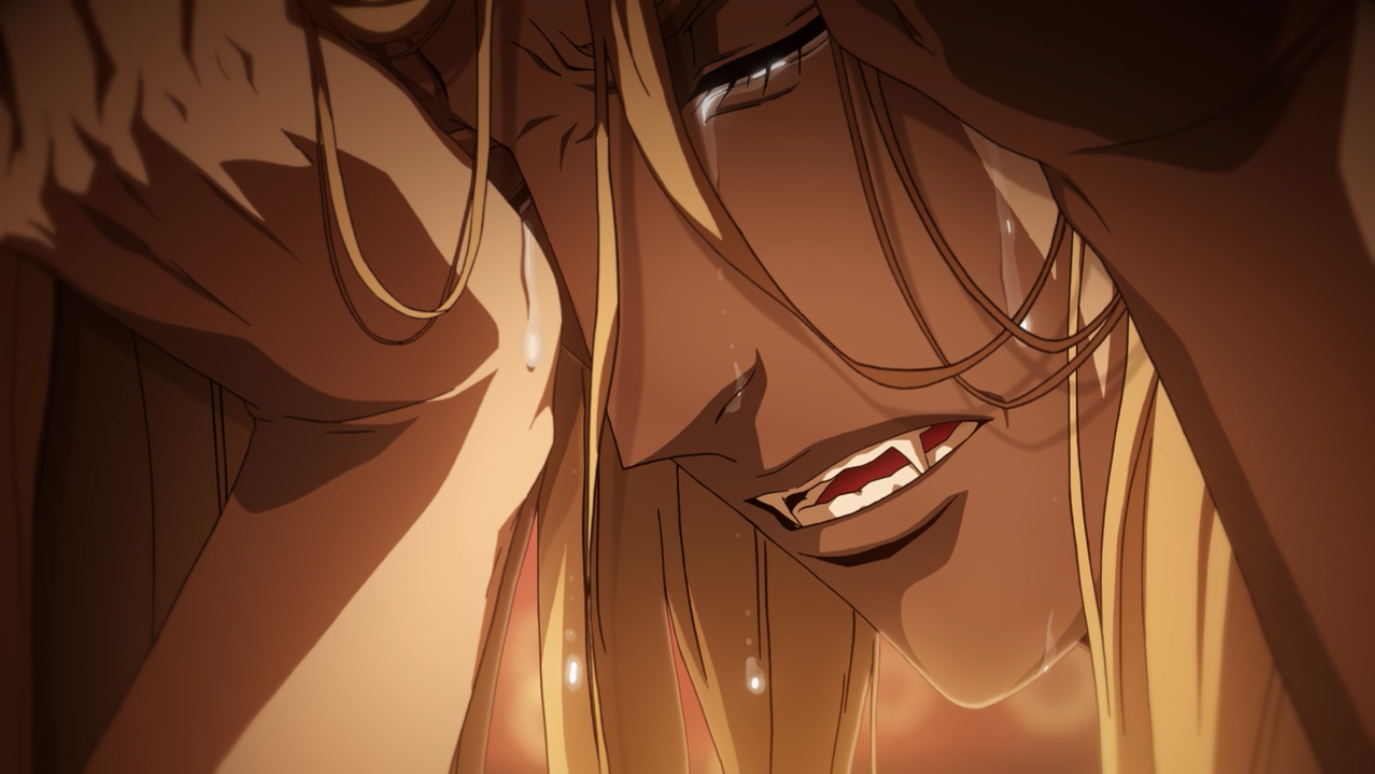 Fahey: Oh, he’ll be better next season. Trevor and Sypha will pop by and he’ll be quipping with the best of them. I have high hopes.

Alexandra: I’m curious to see what happens. I think another series might time-jump ahead to give us a riff on Simon’s Quest but I’m not sure.

Overall, this was really great and I want to see more. My one nitpick is that it wasn’t as funny as the first season, but it rounded out everything else that felt rushed before. Fantastic stuff!

Fahey: I just hope they give the castle more lines next time around. Otherwise, excellent.