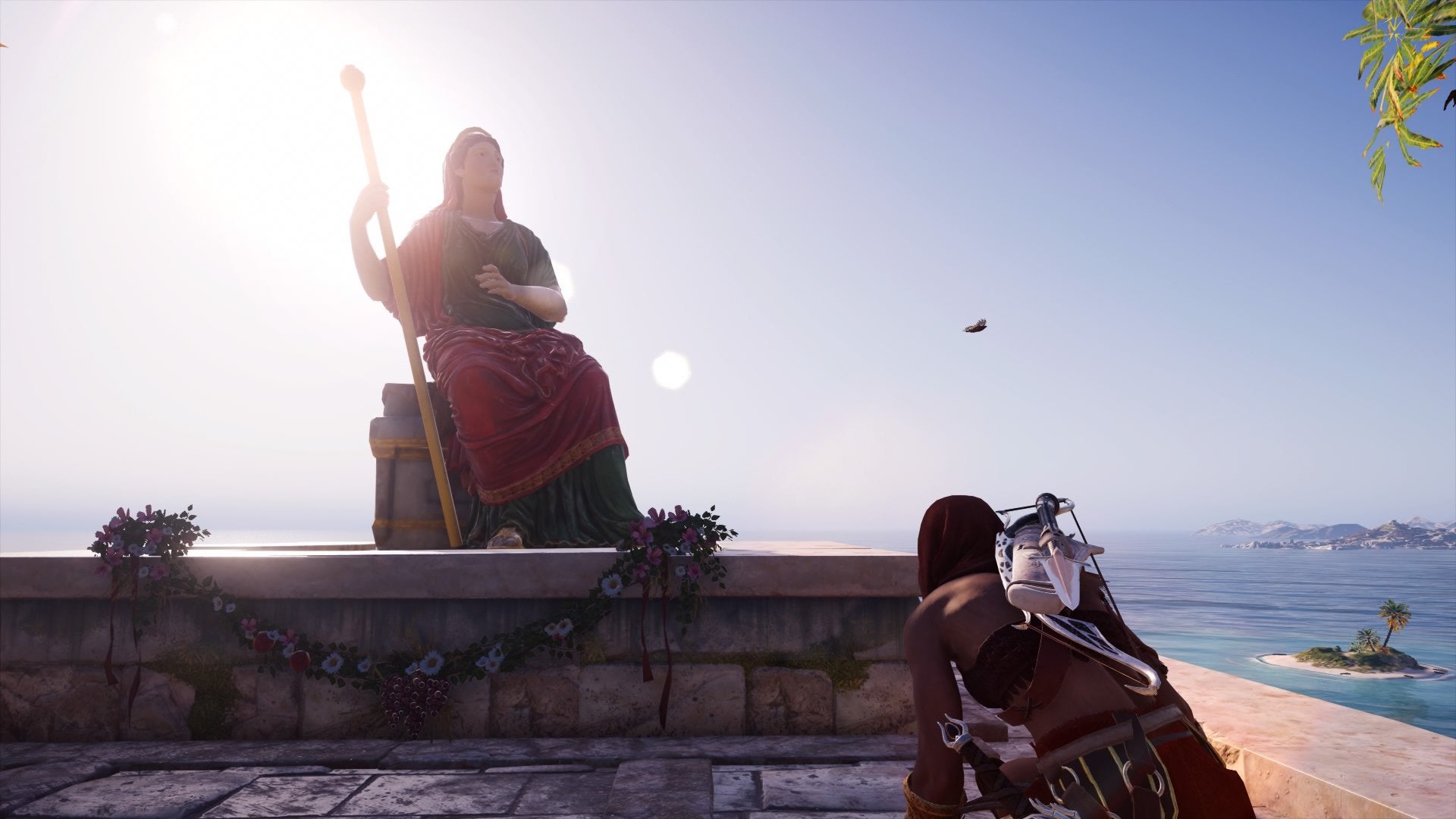 Kassandra “sneaking” in a prayer to Hera...get it? (Image: Ubisoft)

Growing up, I was obsessed with Greek mythology. I was that annoying kid “um actually”-ing Hercules in the theatre, frustrated that a Disney movie didn’t make its star the bastard son of Zeus who murdered his wife and children in a rage. “He’s called Heracles.” I’ve long been fascinated with these legends and the complex stories they weaved. But I always treated them as just that: stories. Assassin’s Creed: Odyssey reminded me how they’re more than fiction.

Assassin’s Creed: Odyssey has been out for a few weeks now, and I’ve been playing it off and on. (After all, I had to finish Spider-Man first, and that stupid Rhino/Scorpion joint boss battle kept kicking my arse.)

As I’ve journeyed further into the world of Odyssey, the latest installment in a series I’ve adored since the very beginning, I found myself caring less about the gameplay, quests, and roleplaying elements (though those are all excellent), and more about how it represents faith.

I am not an expert in Greek history or mythology, I’m speaking simply as a fan of the Greek myths as stories, looking back at them as fictional relics of a bygone era. Aspects of those myths and rituals may have influenced later religions — in the case of Greek/Roman mythology, paving the wave for Judaism and Christianity — but in this time, we mainly treat them as tales, not stories built within a belief system.

Reading them, especially when I was a kid, I saw them as no different than a comic book or young adult novel. It’s why something like Assassin’s Creed: Odyssey was so impactful. It brought the faith behind the myths to life for me. 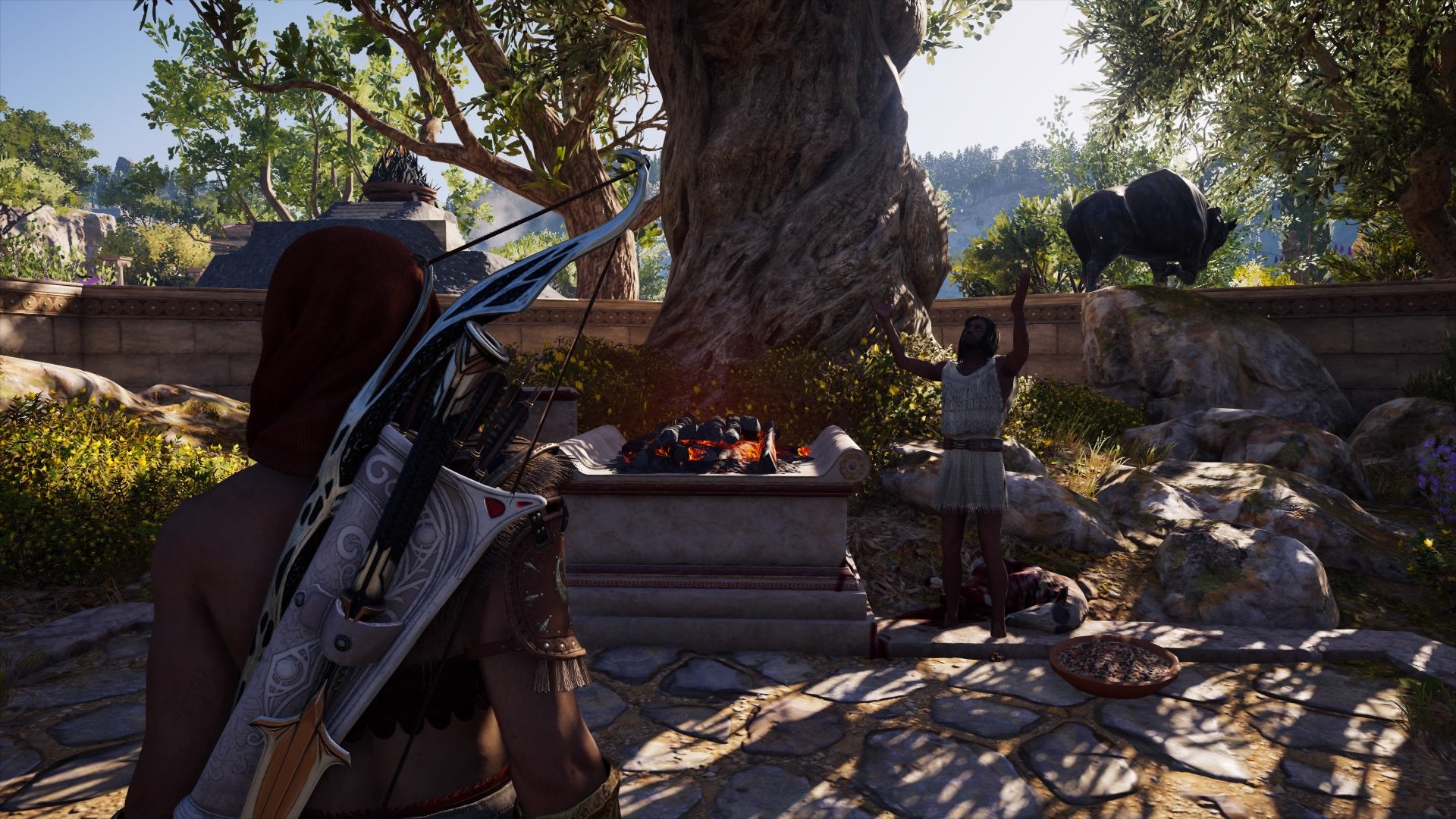 She sure does love interrupting people’s prayer time. (Image: Ubisoft)

In the world of Odyssey (as well as its predecessor, Assassins Creed: Origin), the gods aren’t just figures in tales, they’re part of the world. It’s one thing to read the stories of Athena, Theseus, and Medusa on the page, it’s another to feel them all around you, reflected in the thoughts, actions, and beliefs of everyone you meet.

Everywhere you go, you pass by random NPCs hosting epic debates about the nature of Hera’s vengeance, sacrificing goats to Zeus on altars, or visiting a spring supposedly blessed by Iris, the goddess of the rainbow, in order to cure their diseases. And don’t get me started on the island devoted to Dionysus. Those folks love to party.

I’ve spent hours in the game just roaming around from island to island, watching these computer-generated characters dwell in a world that I’ve loved seeing come to life.

For example, at one point I was sailing the open seas trying to get to some random island when I travelled over an underwater temple dedicated to Amphitrite. I had to stop the ship, go underwater, and explore the shark-infested depths; Amphitrite, the wife of Poseidon, was one of my favourite nymphs in Greek mythology.

I even dressed up as her for Halloween one year as a teenager. I always admired how she ran away after Poseidon said he wanted to marry her, not wanting to deal with his bullshit. Of course, she inevitably lost, as most victims of the gods did, but I respected her effort.

The temple may not have bore much fruit — apart from finding a spear that drains almost all of your health — but I didn’t regret diving under the ocean for one second. It was one of the game’s many tributes to the stories I love, while also reflecting the people who brought them to life.

That’s because it’s not just the environment that makes Odyssey great, it’s also about how you interact with it. Odyssey is more of a roleplaying experience than previous Assassins Creed games, and you can choose to be spiritually pious or more sceptical in conversations with NPCs. I (as Kassandra) went the route of pious, because I love Greek mythology and I found it made me feel more connected to others. By embracing the gods and their needs, Kassandra likewise embraced the people around her.

In one mission, you’re at the Olympics buying sacrificial meat for your devout shipmate, because that’s totally how they did things back then. In another, you’re hunting giant beasts to gain the favour of a priestess of Artemis. The beasts are rumoured to be mythical, like the famed Nemean Lion once slain by Heracles, but it’s never confirmed.

Still, Kassandra treats them as gifts from the gods. This tracks with how ancient Greeks themselves supposedly viewed their own mythology, recognising that some tales about the gods’ conquests weren’t real, but rather allegories designed to help them in their everyday lives. 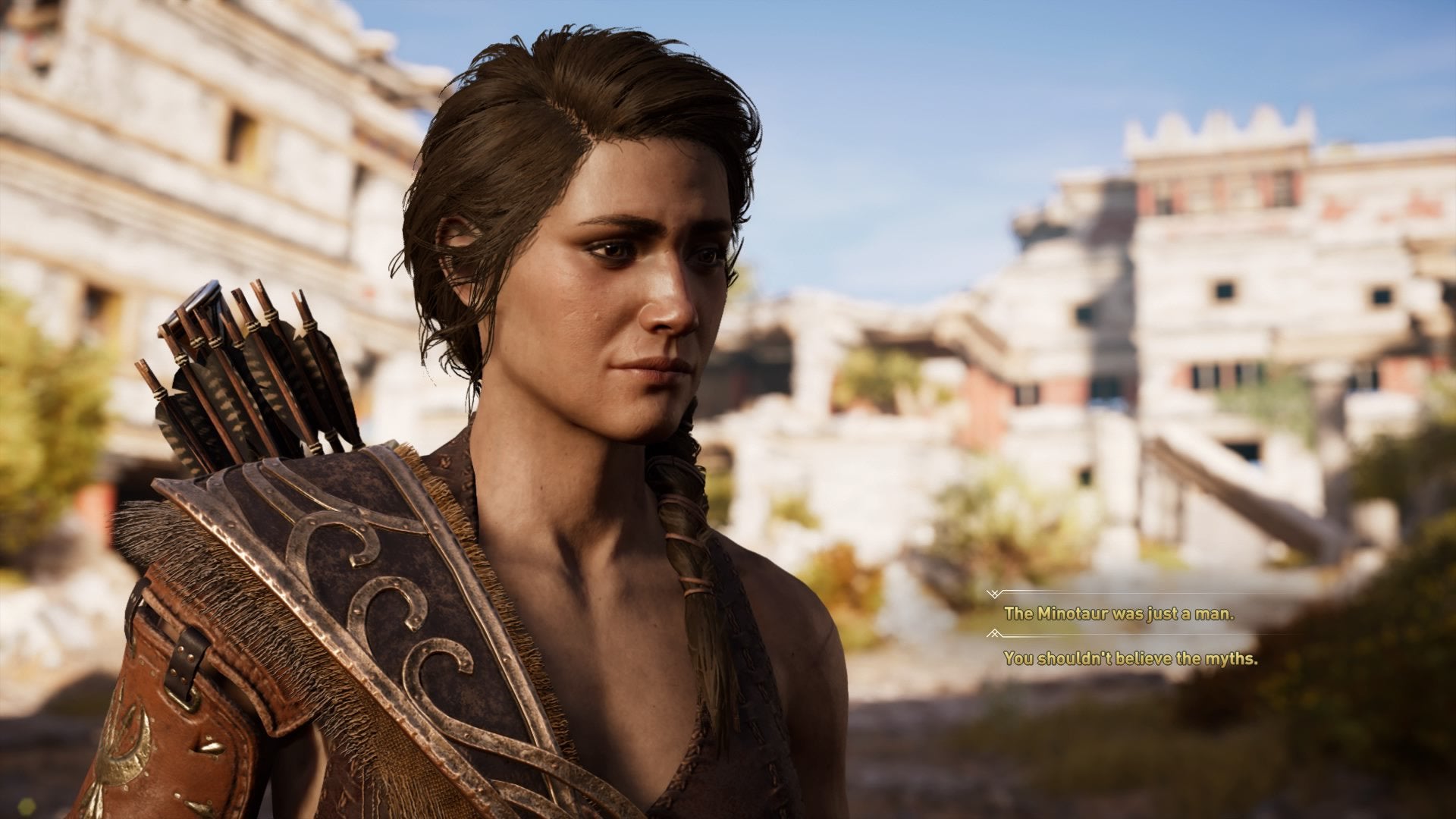 Assassin’s Creed: Odyssey could have easily gone the route of mythology fan service — and in one big way it does, which I’ll describe below — but for the most part, the game does a great job at making the world’s faith feel real. That’s mainly because it has one thing needed to make any belief system feel plausible: uncertainty.

Faith is complex and requires dedicating yourself to something you don’t know to be absolutely true, sometimes mixed with allegorical tales you know to be false. The characters within the game may believe in the gods that modern society has come to accept as mythological beings, but there’s also room within the game’s world itself for human curiosity and introspection.

The best example involves a series of quests on Pephka. In the game, this island had become a shrine to the Minotaur, Zeus’ half-man, half-bull bastard offspring. This tracks with the common practice of the period, when city-states would adopt patron gods or heroes. As you journey through the island of Pephka, doing a series of quests so that you can “fight” the Minotaur and gain honour and glory, it becomes clear that it’s a scam to get money from rich adventurers.

There’s a little boy who takes you on a “Mino-tour” of the best Minotaur attractions, only to show you garbage and then try to rob you. When asked about it, he basically replies: “Come on, you don’t believe all this crap, do you?” It was an interesting comment, showing the fragility of the human experience, and how in moments of faith there’s still room for doubt. 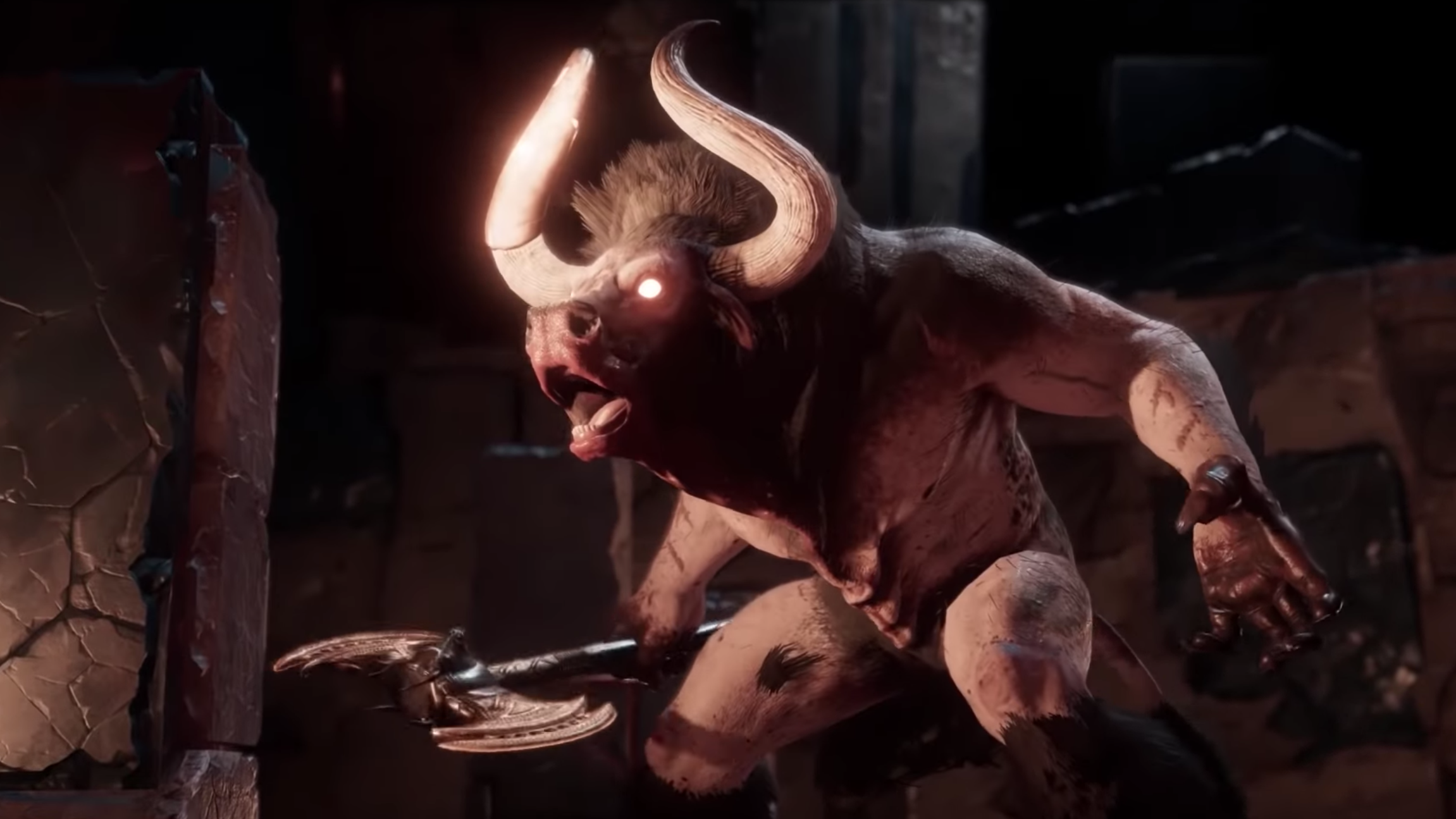 That said, there is actually a Minotaur in Assassin’s Creed: Odyssey. Apparently, the Greeks were right on the money with their belief system — at least in the world of Assassin’s Creed.

In the game, “Those Who Came Before” created a bunch of mythical creatures to guard their precious mind controlling treasures against anyone who would use them for evil. I understand that’s a lot of word soup for people who haven’t played any of the games, but all you need to know is that the universe of Assassin’s Creed has an ancient race of super people called the Isu that created humanity, and the games pull them out whenever something needs magic to make sense.

These beasts seem to clash against the game’s otherwise careful balance of myth and faith, by validating the Greeks’ belief system with concrete proof. The game creators have acknowledged this and justified it by noting that Kassandra is practically a mythical being herself.

But it’s also in line with the ancient Greeks themselves, who knew many of their own stories weren’t real but loved them anyway. By making them real, Ubisoft made us believers too. Besides, it’s still a video game involving ancient beings who invented magic mind control balls, so I realise some things can be taken with a grain of salt. Every game is allowed a bit of fun — in this case, some mythological fan service that looks cool and is awesome to play. Come on, who doesn’t want to beat up a giant cyclops?

A video game with a glowing-eyed Minotaur might not be entirely historically accurate, but I feel Odyssey does something that’s hard to find in video games nowadays. It combines myth and faith in a way that helps you relate to people who are long gone, but whose stories will never truly die.

If you’re someone like me who loves Greek mythology and wants to experience the world they came from, I definitely recommend picking up Assassin’s Creed: Odyssey.