falloutfallout 76featureinventorypatchpcps4xbox one
To sign up for our daily newsletter covering the latest news, features and reviews, head HERE. For a running feed of all our stories, follow us on Twitter HERE. Or you can bookmark the Kotaku Australia homepage to visit whenever you need a news fix.

Fallout 76 players are running out of room in their inventories, and the game’s not even out yet. Fortunately, Bethesda is promising a fix. Finding and crafting the best equipment is a major part of Fallout 76. The game’s world is full of junk you can pick up, useful for creating everything from guns and ammunition to the bed players sleep on in their campsite. But each piece of that junk weighs something.

Fallout games have traditionally limited players’ inventories by making them unable to run if they’re hauling too much weight, while providing storage containers with no capacity limits in various places around the map for housing all the excess. While Fallout 76 maintains the limit on how much individual characters can carry before they become encumbered, it also imposes a limit on how much players can store in containers to 400 units of virtual rubbish.

Players are quickly filling up their pockets and running out of space in their stashes as a result.

In one popular post on the game’s subreddit, one player said that the Stash limit is ruining the game for them. “I have a modest amount of a bit of everything and I am full,” they wrote. “This leaves no room at all to collect different guns and blunt weapons and sets of armour and power armour.” They said that while the limited space fits in with the idea of Fallout 76 as a survival game, it cuts against the endless loop of collecting, crafting, and upgrading that MMO-style games are predicated on.

“I shouldn’t be able to max out my stash in [five] hours of play,” another person responded. “Bethesda should know they’ve created a legion of hoarders with their past games.” 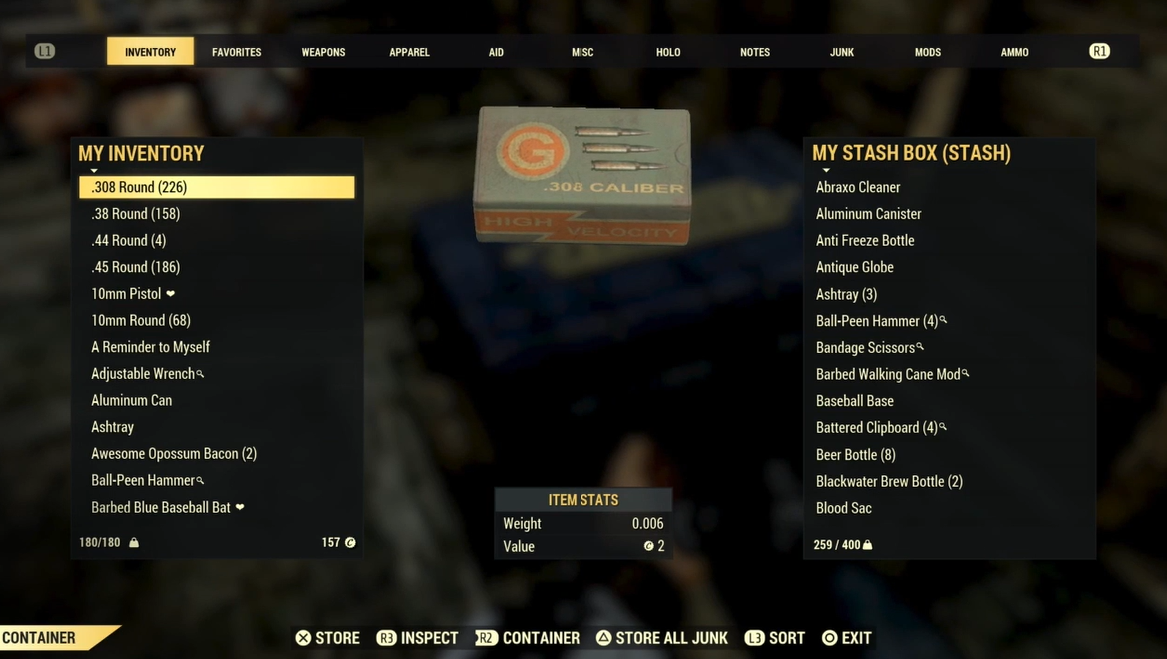 Another player even made a very handy guide for how to get the most out of your Stash, with tips like what order to break junk down in and a hierarchy of items worth holding on to. “Ammo is also fairly common, and can be specifically crafted for your weapon if you find that sweet sweet favourite weapon,” they wrote. “So don’t save 800 shotgun ammo. Just drop it, it cannot be sold.” However, even that player thought the storage limit should be, at least, quintupled.

The stingy Stash limit took players by surprise because Bethesda had initially said that there would be none. “Store away,” wrote Senior Vice President Pete Hines wrote in response to someone on Twitter asking about the game’s inventory management system. “Not aware of any limit.” Since then, Hines has been hounded by players asking about whether the game’s stash limit would be increased.

On November 6, just before Fallout 76 received a 30GB update, Hines said that he had not previously been aware that there would be a stash limit, but that the team was working on changing it. “There are reasons why it’s there and those reasons are important,” he wrote, but did not elaborate on those reasons. (Kotaku reached out to Bethesda for comment, but the company did not respond, nor has it responded to any email or phone call from Kotaku since 2013.)

Yesterday, Bethesda announced that increasing the Stash limit would indeed be one of its first priorities following the game’s full release on November 14. “We’ve seen [Stash size] come up a lot and understand the frustration,” a representative of the company wrote on Reddit. “While the Stash size at 400 weight limit can get easier to deal with over time, we do plan on increasing it in the future.”

It remains to be seen how soon that particular change to the game will get implemented. Destiny‘s inventory system had a similar problem when the game first came out back in 2014, and it wasn’t until the following April that Bungie finally expanded players’ vault space so they could hoard more of their rare loot.

Hopefully Fallout 76‘s Stash size gets fixed sooner than that.