How To Install A Graphics Card

There comes a time in every gamer’s life when their ageing graphics card doesn’t cut it anymore. While your older card is to be commended for its years of service — and you two probably had many fond memories together — it’s time to let your friend live out its days elsewhere and upgrade to something newer, faster, and much more expensive.

I recently made that leap myself, moving from a 2015-era Nvidia Geforce 980 Ti to a brand-new Nvidia Geforce RTX 2080. It’s a lot easier to migrate from an older card to a newer card if it’s from the same manufacturer, and the process is slightly more involved if you’re jumping ship between AMD and Nvidia. The physical installation is the same, though, and that’s what I’m going to cover in this guide.

Extracting your old graphics card from your computer

Your computer probably looks different than mine, but there are a few general steps you’ll want to take when upgrading your older graphics card to a newer one. First, turn off your computer. Unplug your power supply and tap the power button on your case to discharge any capacitors.For the purposes of this article, I also unplugged everything else on my system and dragged the case into the hallway for prettier pictures: 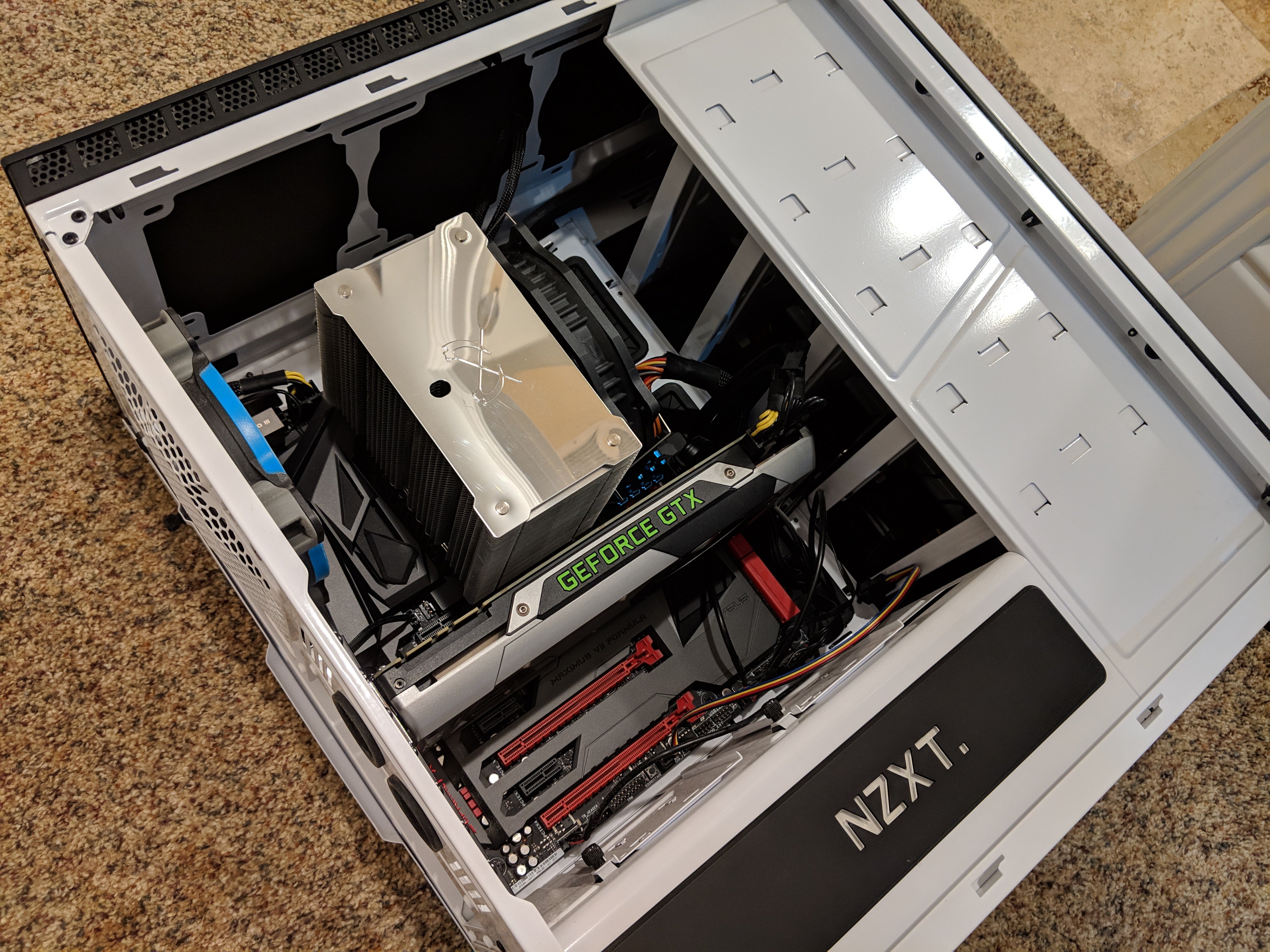 If you have room under (or on top of) your desk, you don’t have to move your system. You do, however, have to unplug anything you’ve connected to your graphics card. Pop the site panel off your case and, before you do anything else, clean up some of the gross dust and debris you’ve let linger inside your system. It’ll only take a few minutes, and it’ll help keep your computer pretty and cool.

You’ve already pulled the HDMI, DisplayPort, or DVI cables out of your card’s rear—as awkward as that might sound. You’ll now want to disconnect its power cables, which isn’t very difficult to do. When you’re staring at the inside of your case, you’ll find your graphics card’s power cables on its right side. Press the little locking mechanism and separate them from your graphics card. 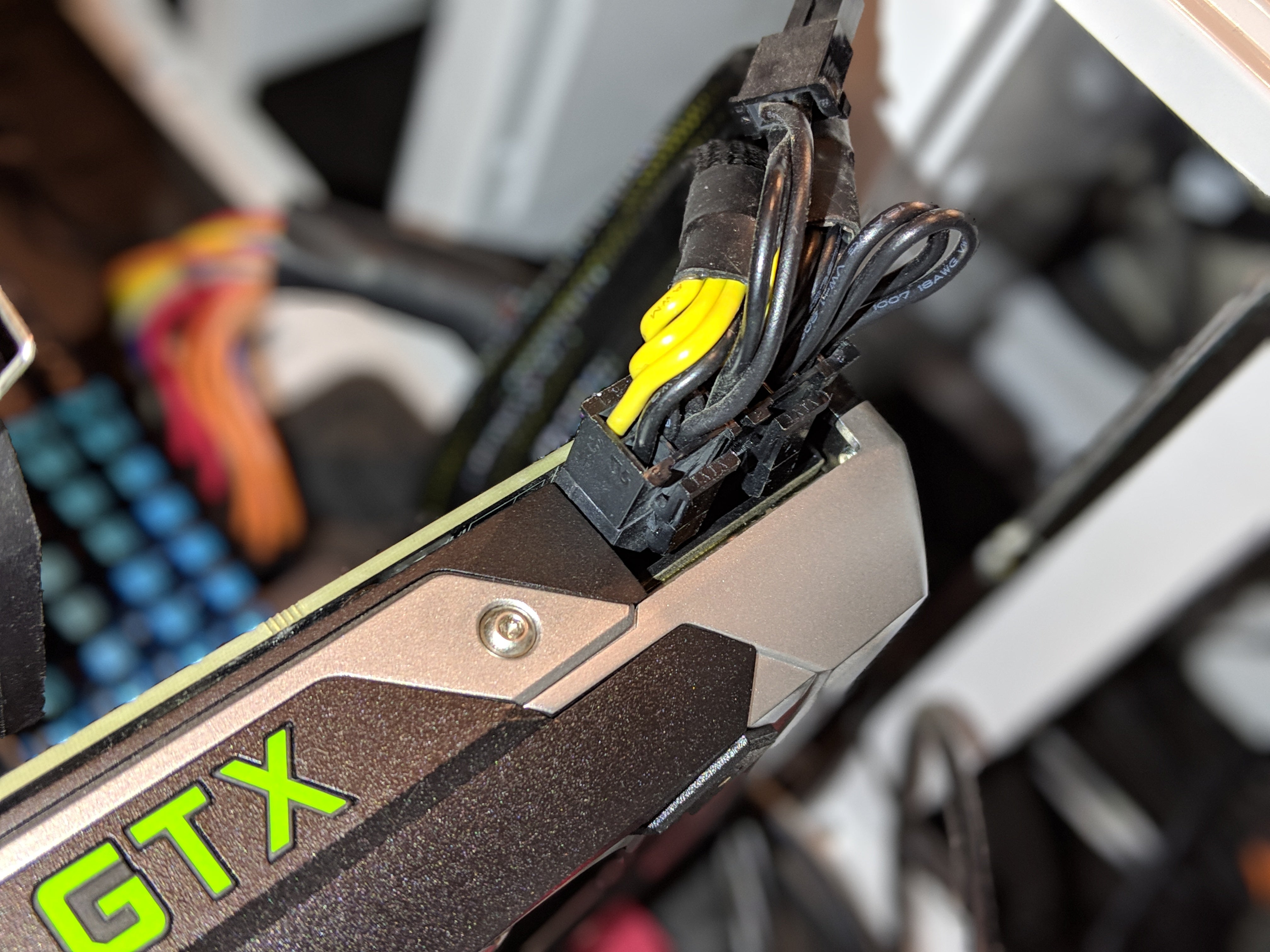 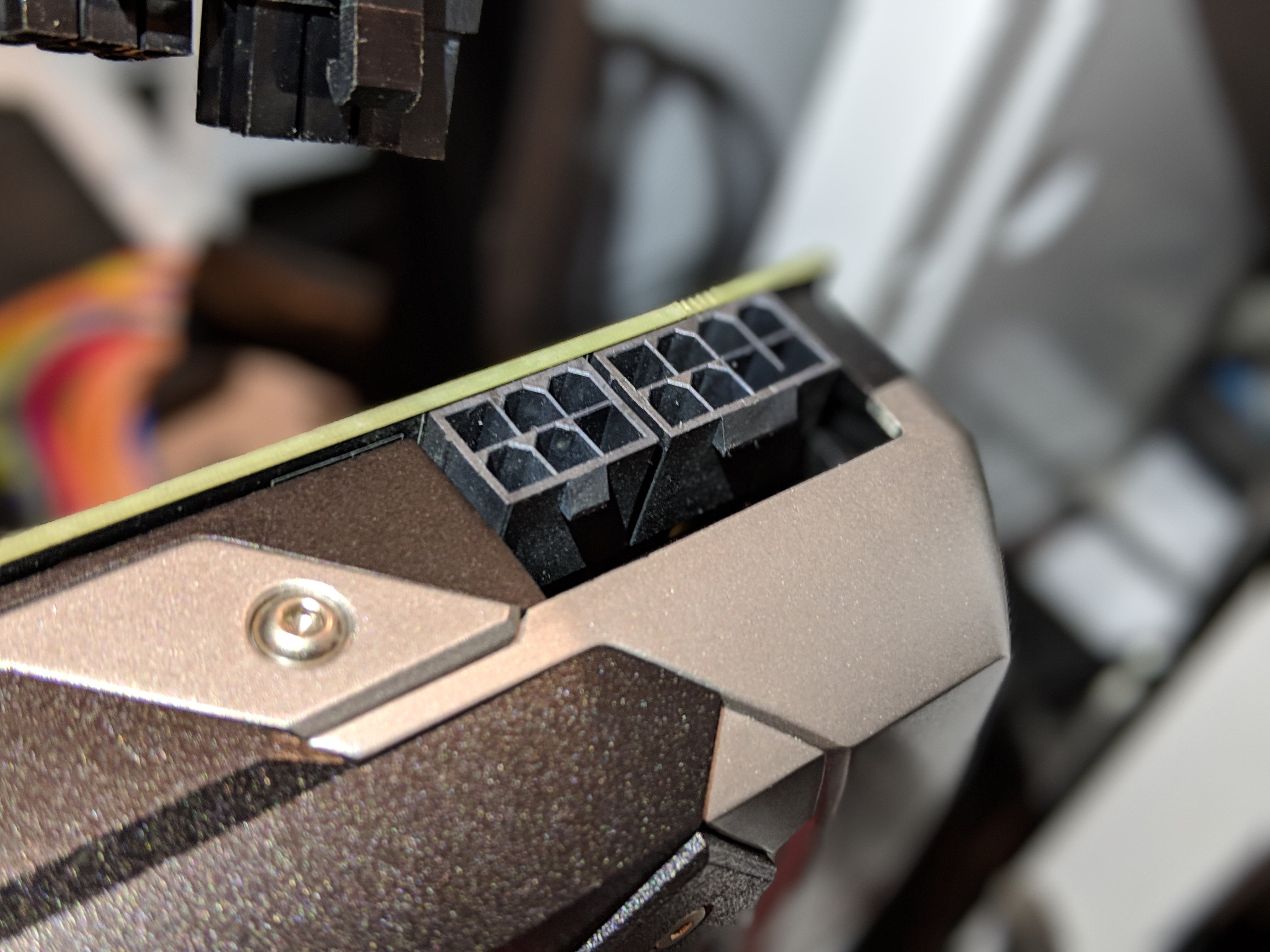 Unscrew your graphics card from your case

Your graphics card is typically secured to your case by two screws on its left side. (If you didn’t complete this step when installing your card, you are a monster — or you really like living on the edge.) Assuming you didn’t use thumbscrews, or they’re too tight, grab your screwdriver and remove these screws. Set them somewhere where you know you won’t lose them. 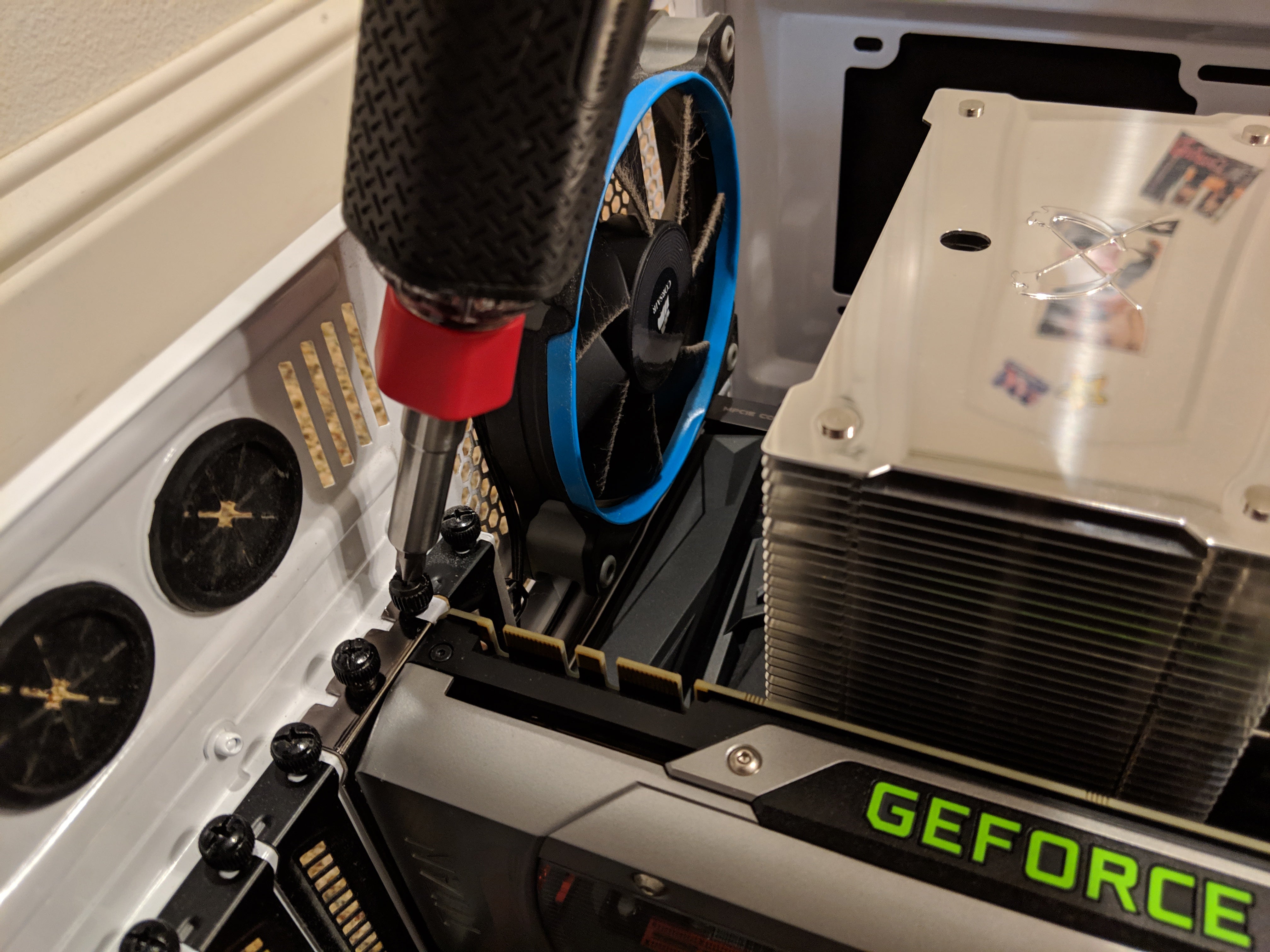 A magnetic screwdriver comes in handy during these moments. (Photo: David Murphy)

Unlatch your graphics card from your motherboard

If you look at the top of your graphics card, you’ll likely see a little locking mechanism at the end its PCI Express bracket. It’ll look something like this: 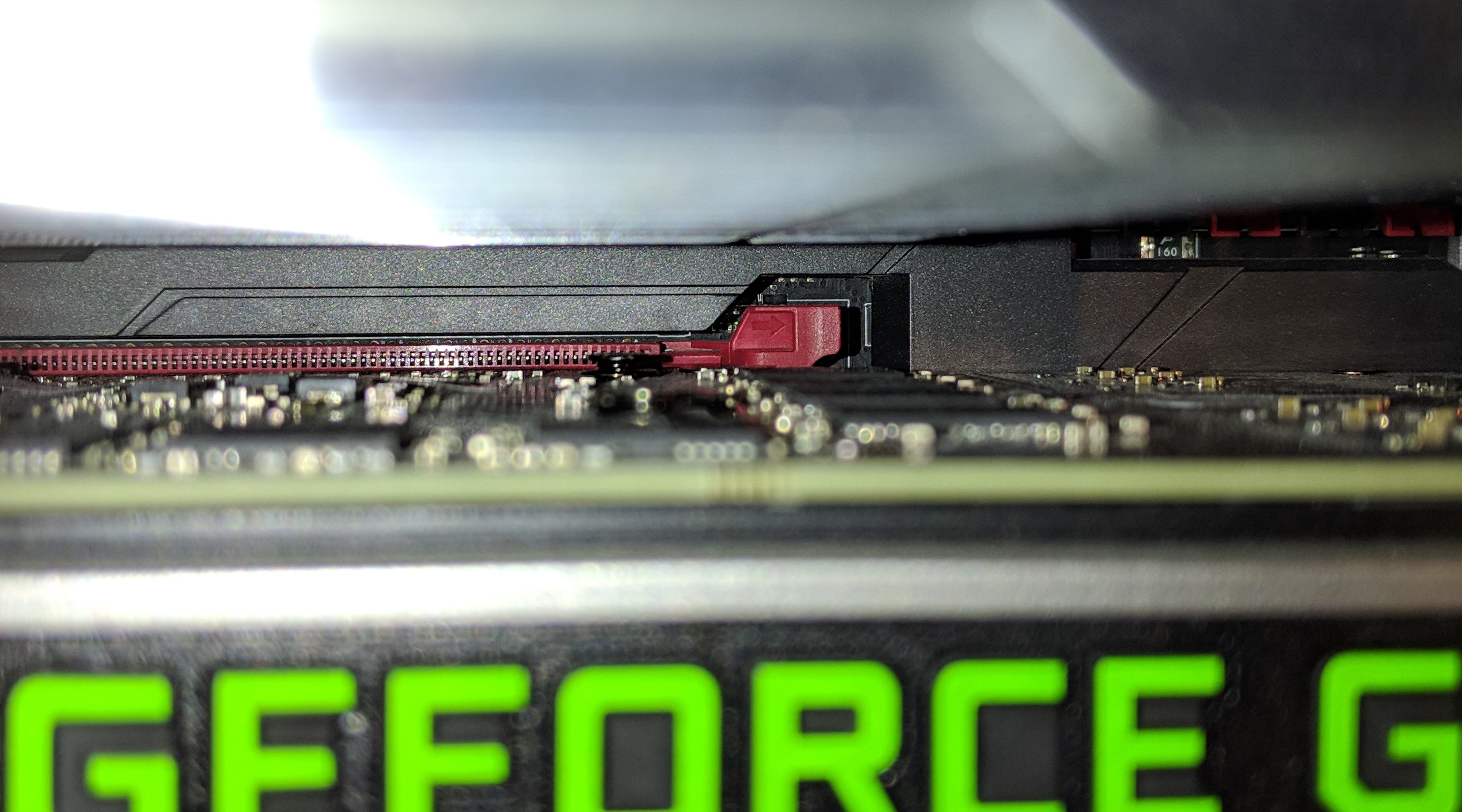 And here is what the entire PCI Express slot looks like without a graphics card in the way:

This mechanism only require you to press on it once to unlock your graphics card; you might also have to hold it down while you gently pull your graphics card out of the PCI Express slot. This is normally a pretty easy process unless you have a system like mine, where the world’s bulkiest CPU cooler covers the locking mechanism and makes it impossible to access with your hands. Here’s a top-down shot of what that looks like: 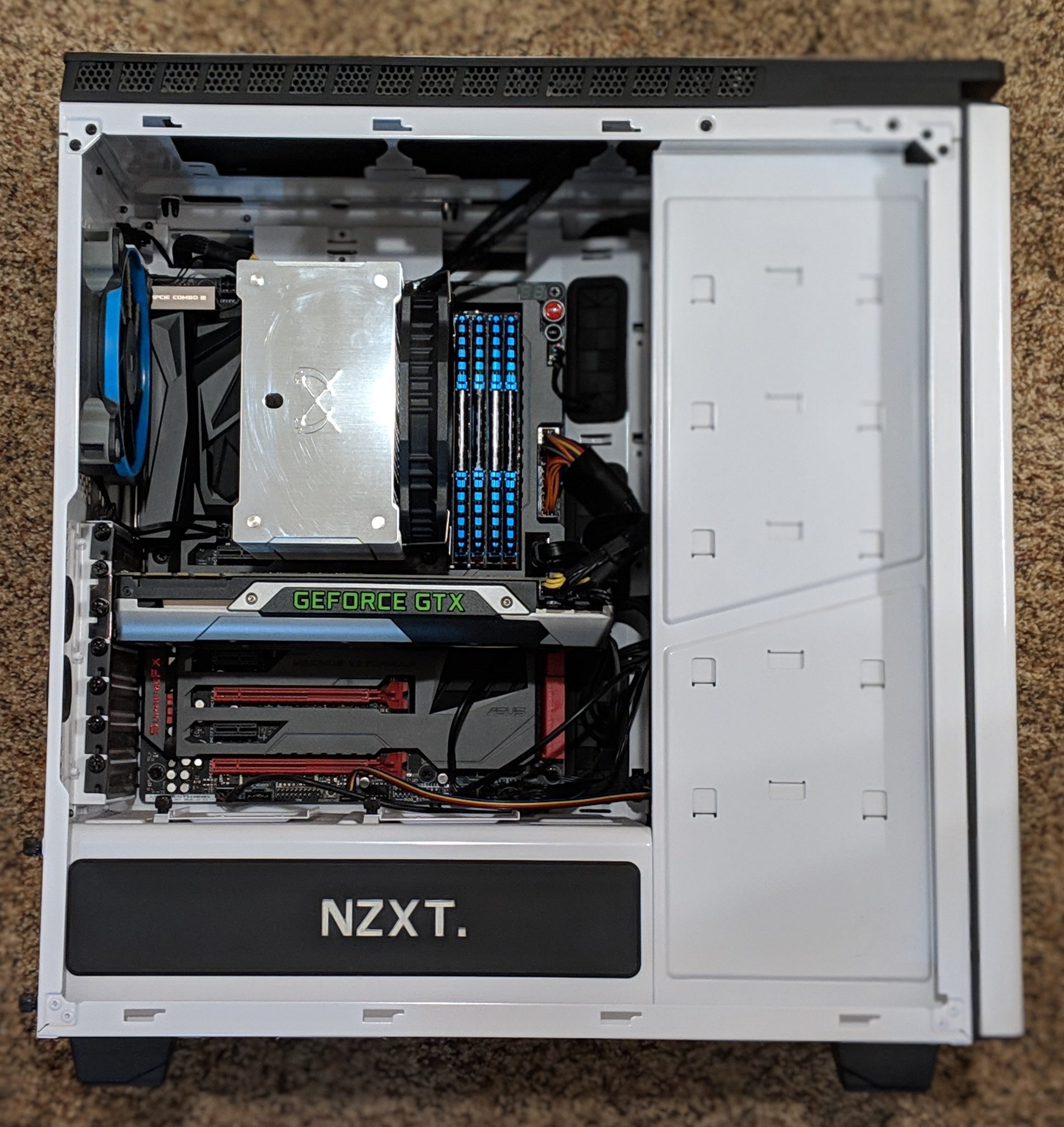 There is almost no free space between my gigantic (aftermarket) CPU cooler and my to-be-replaced GeForce 980 Ti graphics card. (Screenshot: David Murphy)

In my case — pun unintended — I had to resort to using a pair of pliers and surgeon-like dexterity to gently press down on the locking mechanism:

With a little fussing, I was finally able to unlatch the graphics card and remove it: Now that you’ve leveled up your “removing graphics card” skill, you’ll find that you have all the knowledge you need to install a new graphics card. It’s the same series of steps, just in reverse order.

First, take your new graphics card out of the box and — important! — don’t forget to remove any plastic film the manufacturer has attached to the card itself. It’s hard to miss, but you might overlook it: 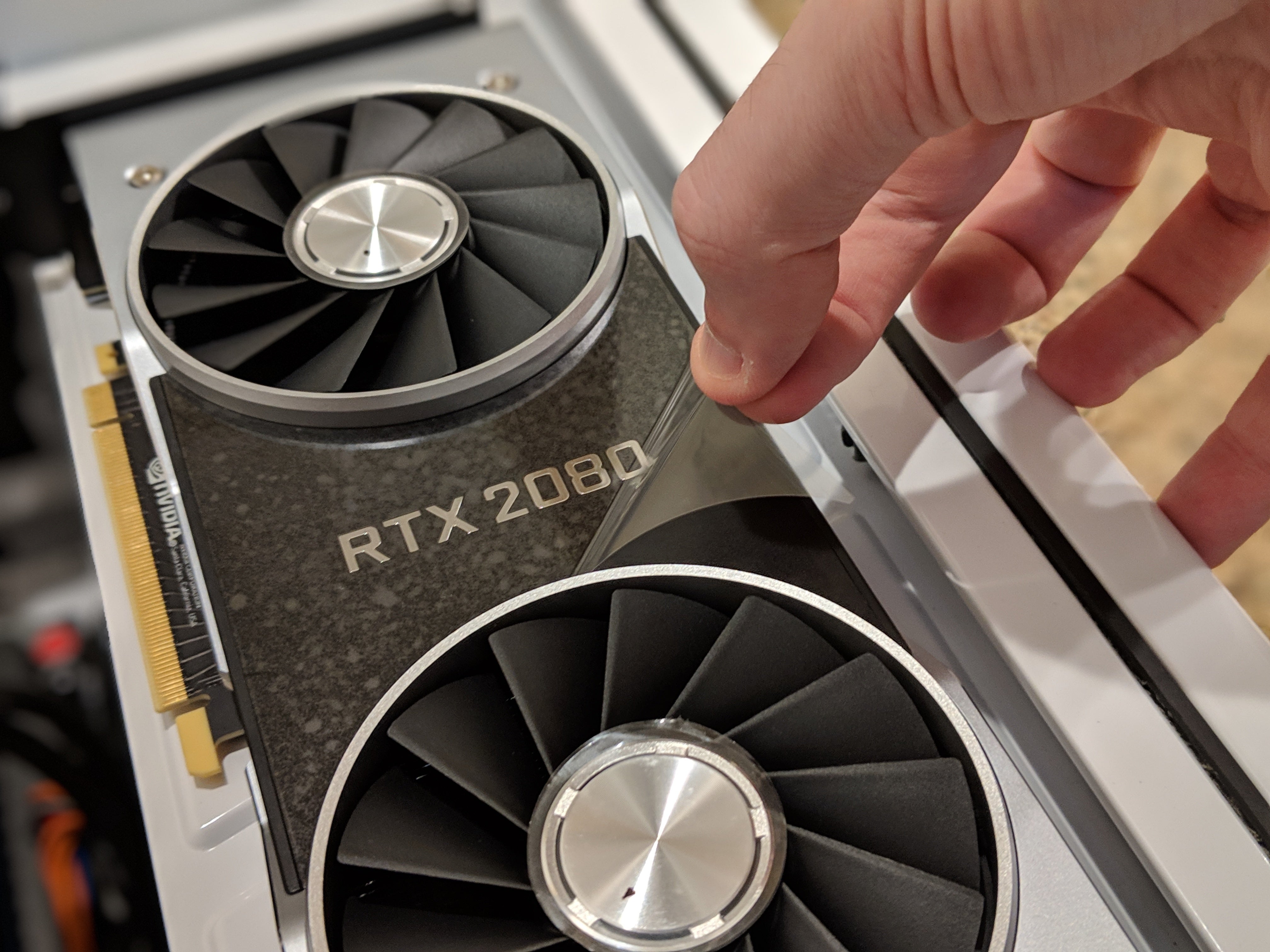 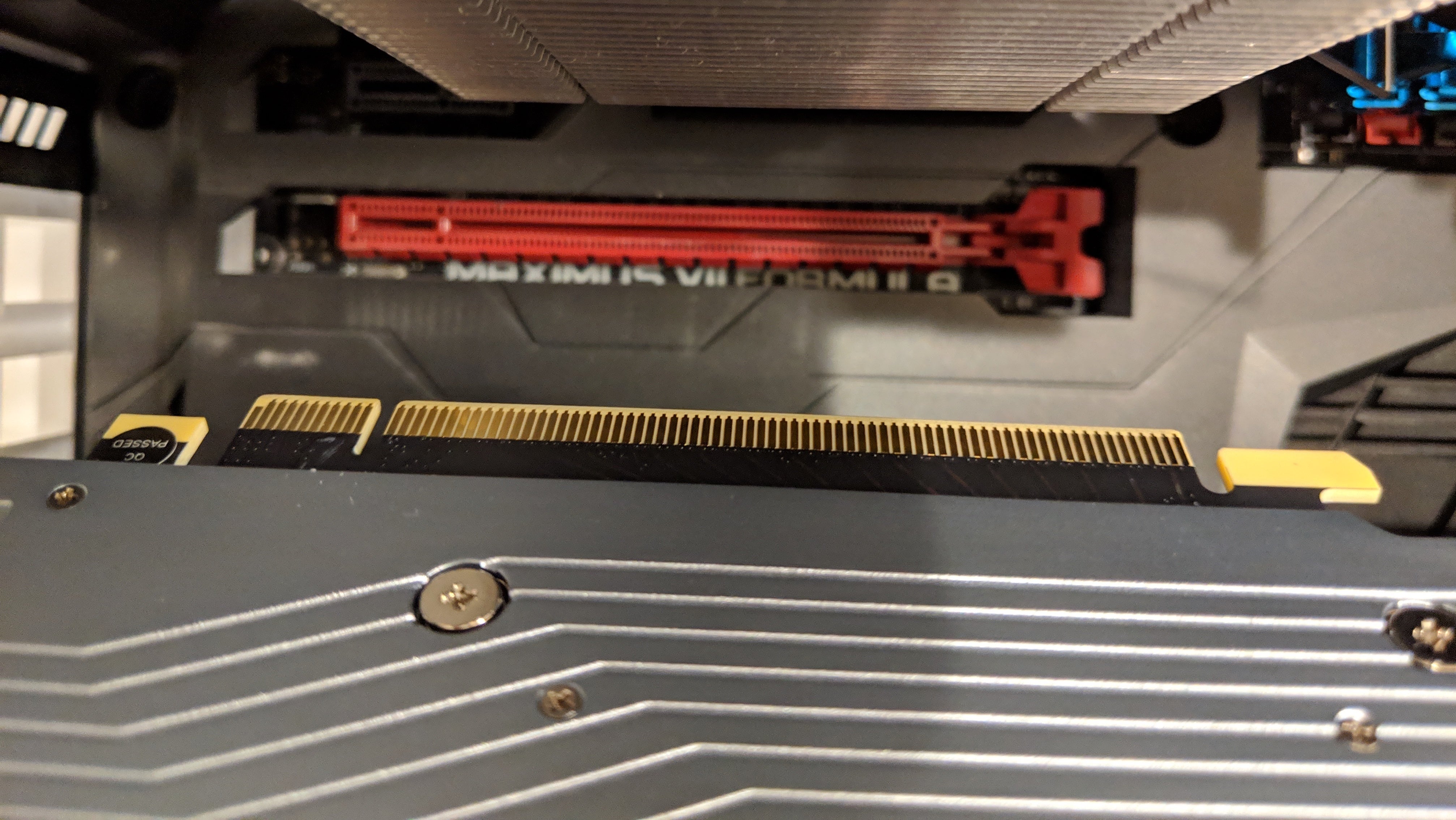 When inserting a new graphics card, you’ll need to give it a little force to trigger the latch on your PCI Express slot. Don’t go Hulk when inserting your graphics card; only a little pressure is necessary. You should hear or feel the click. (Screenshot: David Murphy)

Screw your card into your case using the screws (or thumbscrews) that you hopefully haven’t misplaced from before: 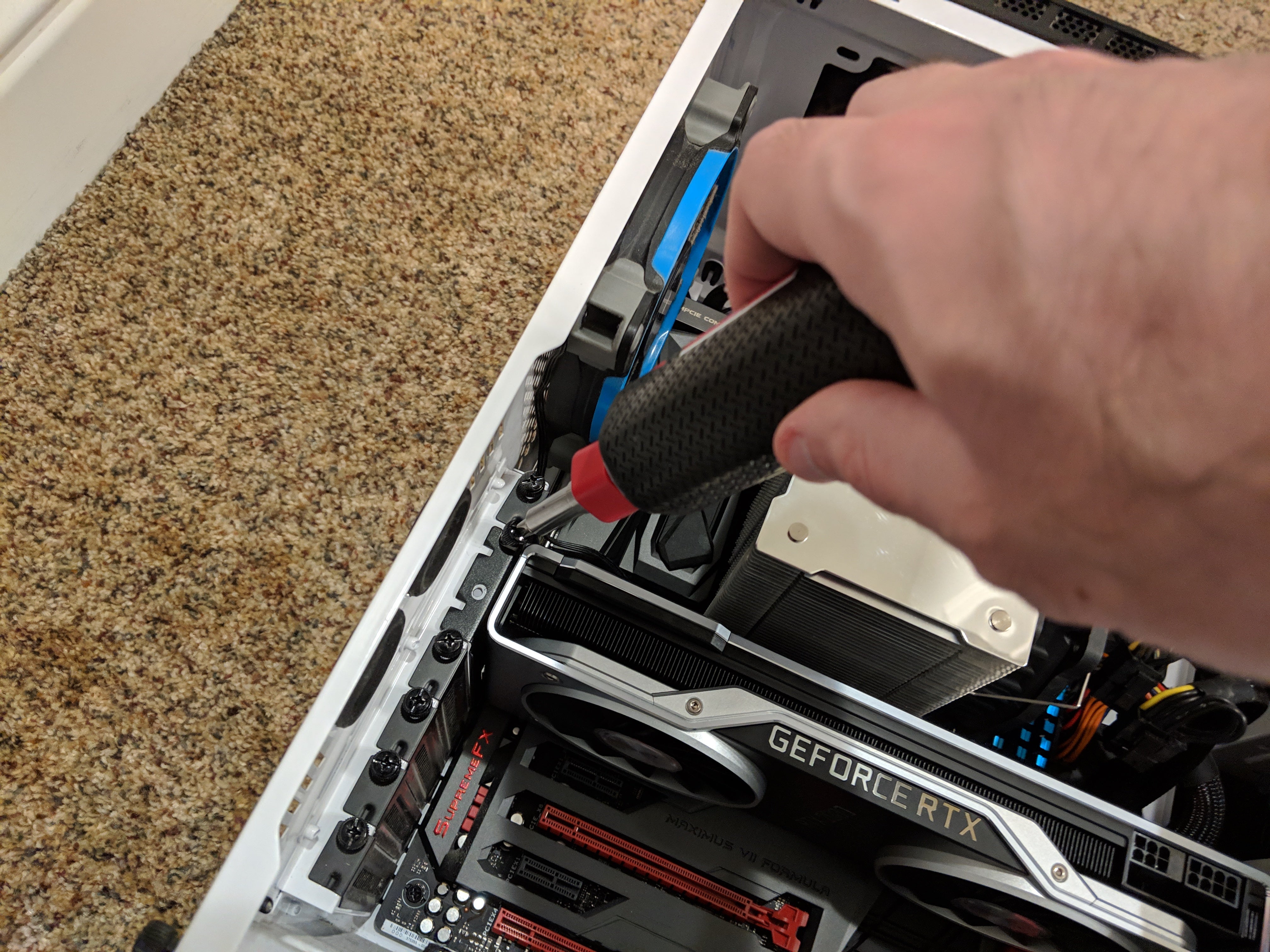 Finally, reattach your power cables. If you have to connect both an 8-pin and 6-pin cable, make sure you hold the former tight (if it’s the kind of cable that can function as either a six-pin or eight-pin, thanks to that little dangling bit). 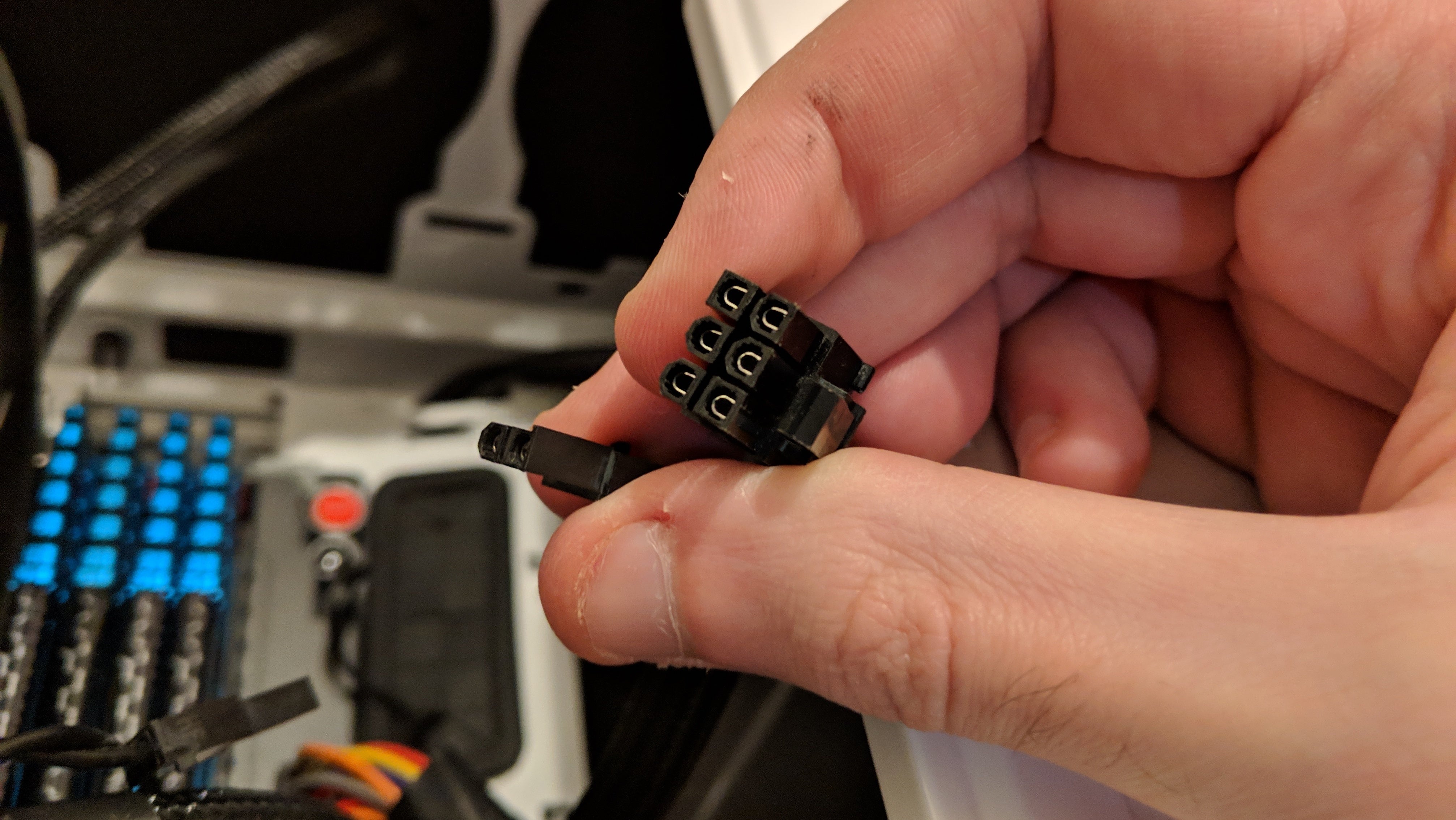 The aforementioned “dangling bit” that gives you both a six-pin and eight-pin adaptor on a single cable. (Screenshot: David Murphy) 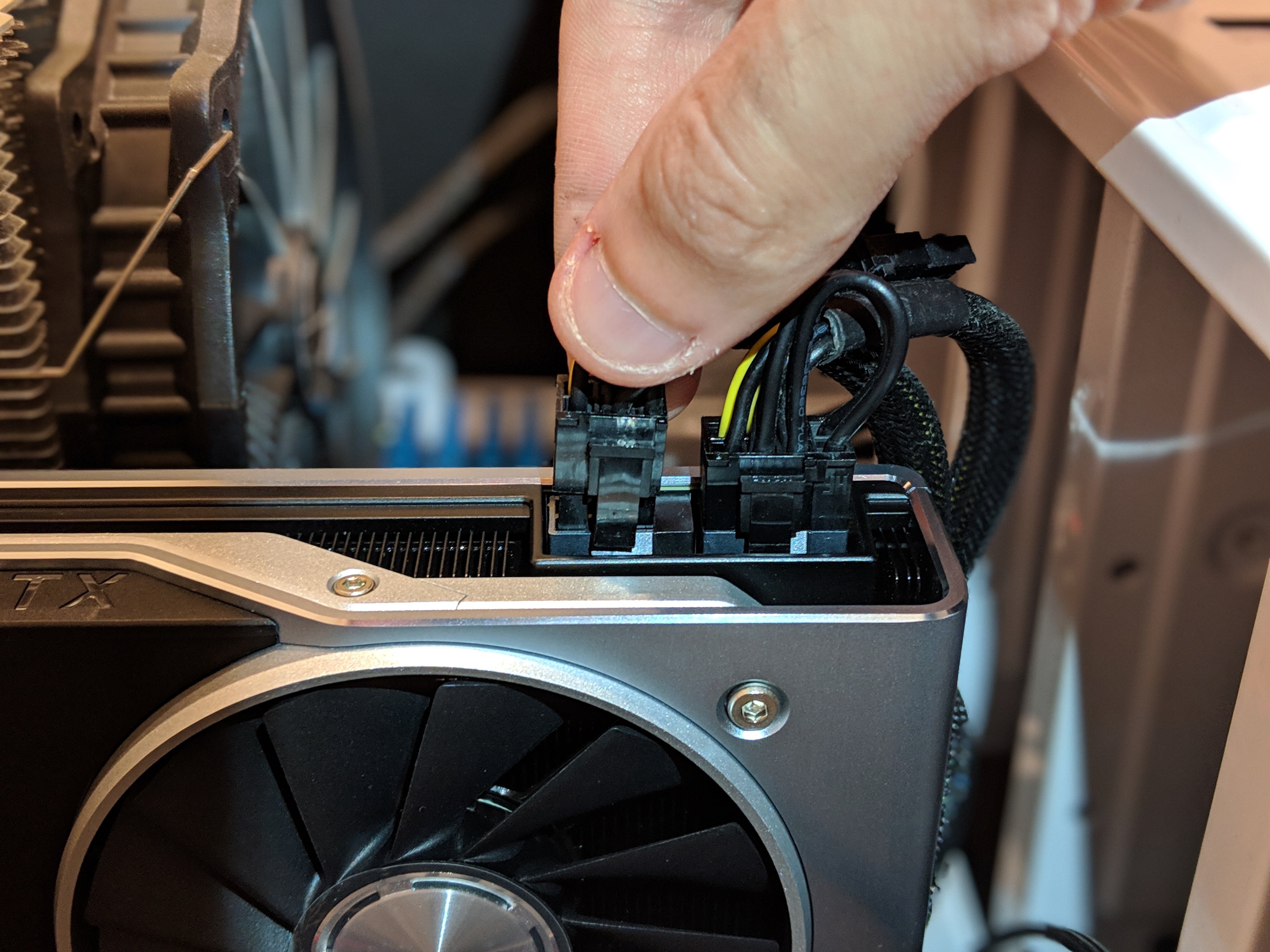 You can now reattach your case’s side panel, reconnect your HDMI/DisplayPort/DVI cable(s), plug your power supply back in, and turn your PC on to take your new graphics card for a spin. 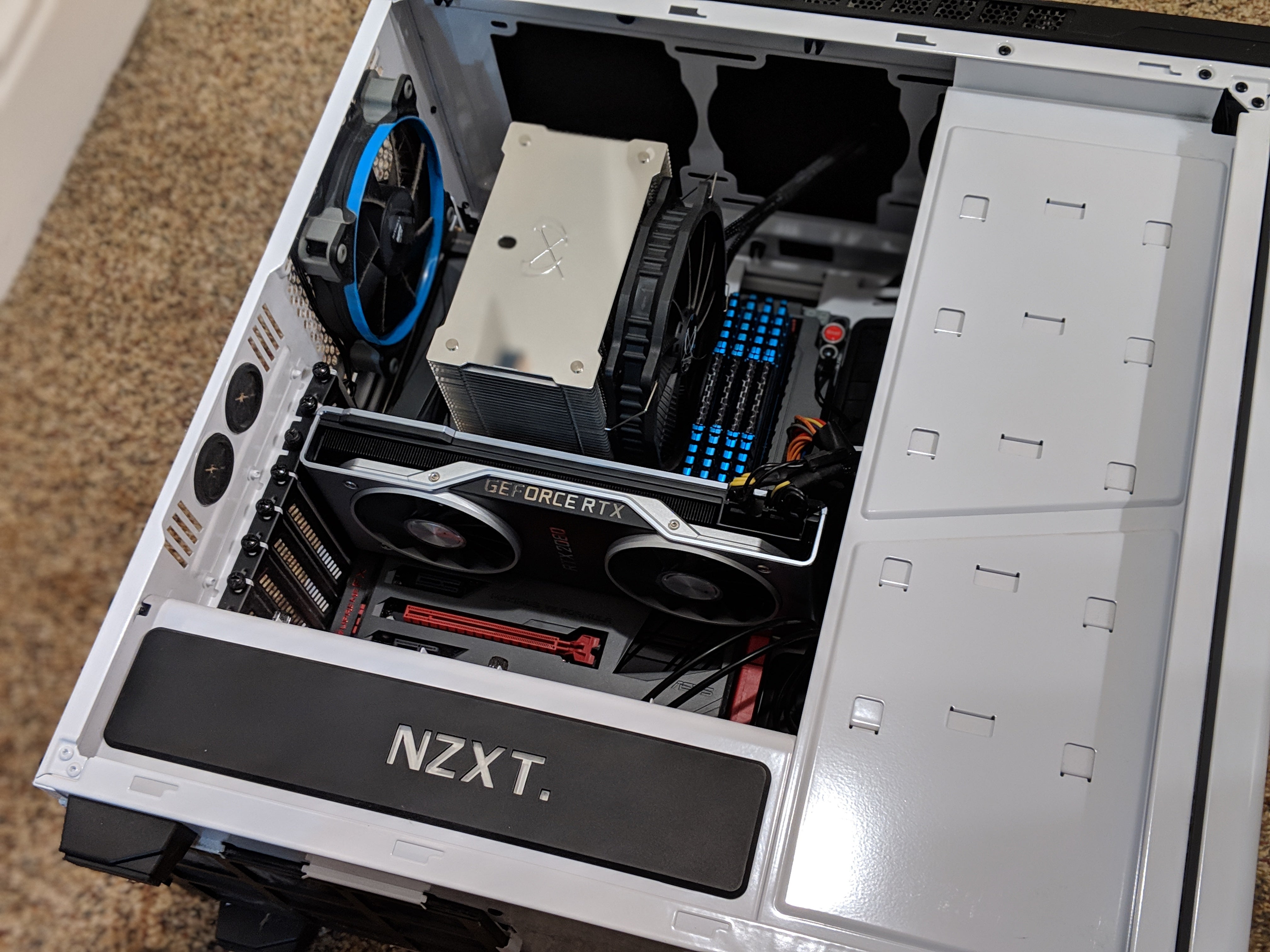 One final tip: If you’re moving from one manufacturer to another (AMD to Nvidia, or vice versa), you’ll want to make sure you uninstall whatever drivers your previous card used and install the right drivers for your new card.

Even if you’re moving to different cards from the same manufacturer, it’s worth reinstalling the latest drivers. In my case, my new GeForce RTX 2080 graphics card comes with a USB-C port that initially confused Windows: 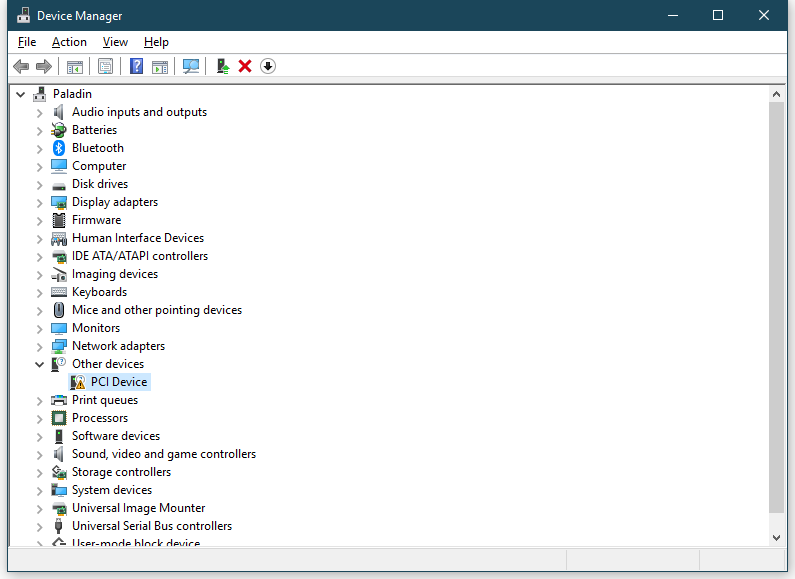 Reinstalling the latest Nvidia drivers (and selecting the “Clean Installation” option when doing so) fixed that right up.

Whenever I’m making a big change to my system, I like to run a few benchmarks before and after the upgrade to see just how much of a difference it makes. For graphics cards, that’s easy: You can run synthetic benchmarks (like 3D Mark), user-created benchmarks (like Superposition), or games that have built-in benchmarking modes (like Shadow of the Tomb Raider).

I’ve previously covered a number of benchmarking options, which are all worth checking out.

When you’re running benchmarks, make sure you keep the settings identical between your “before” and “after” runs — or else you won’t get a perfect comparison, of course. Here’s what I ran to test my new graphics card: 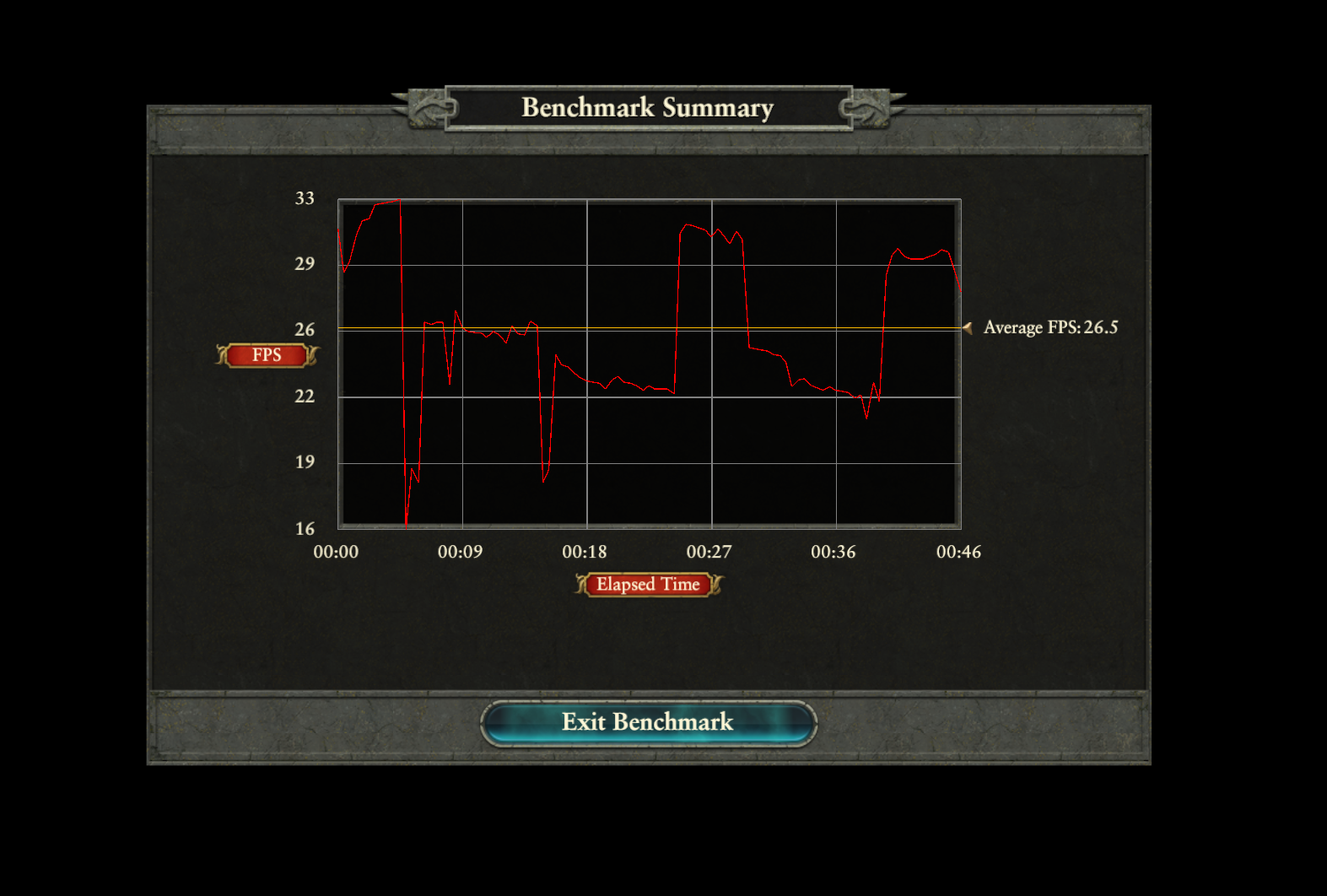 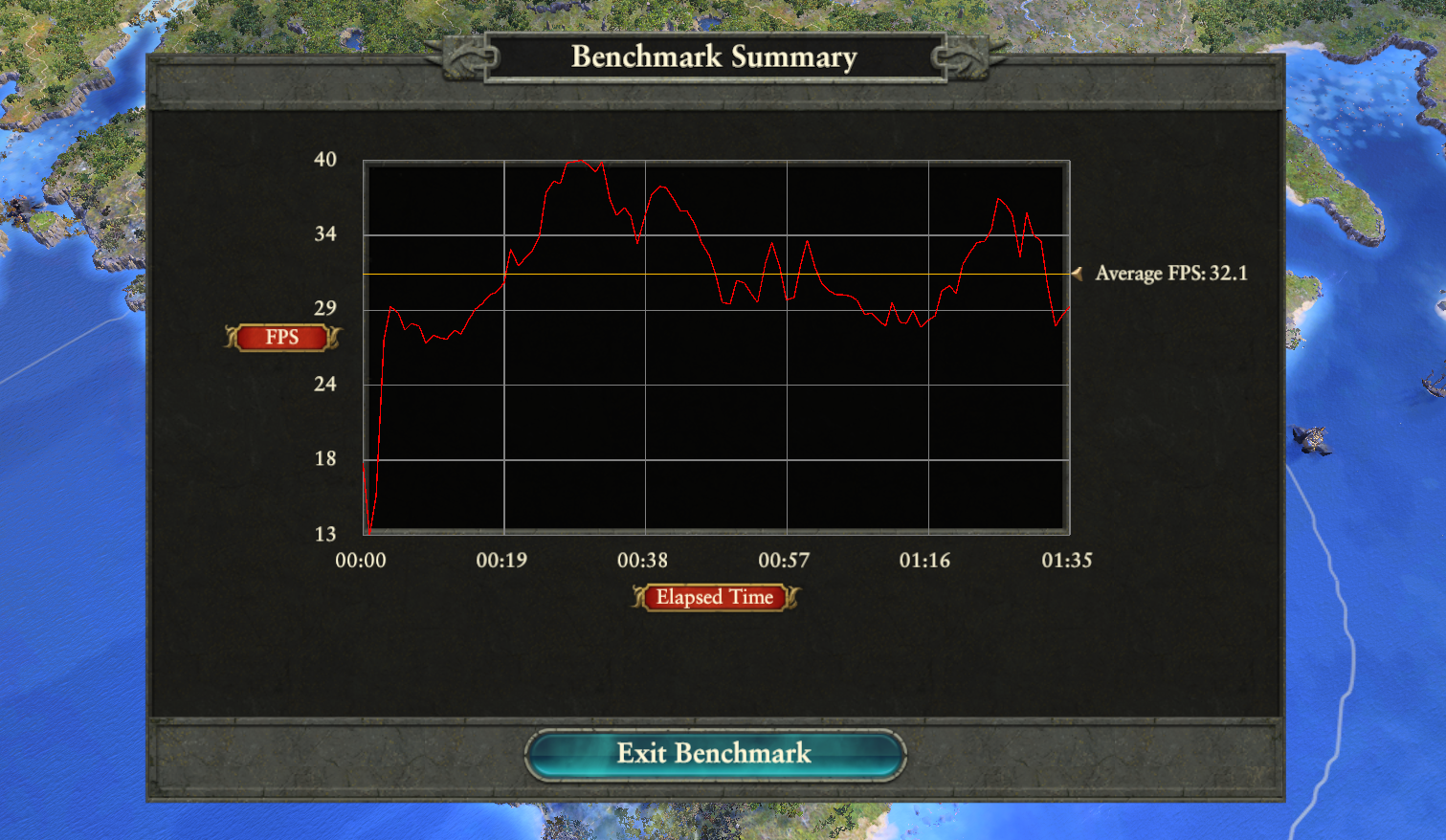 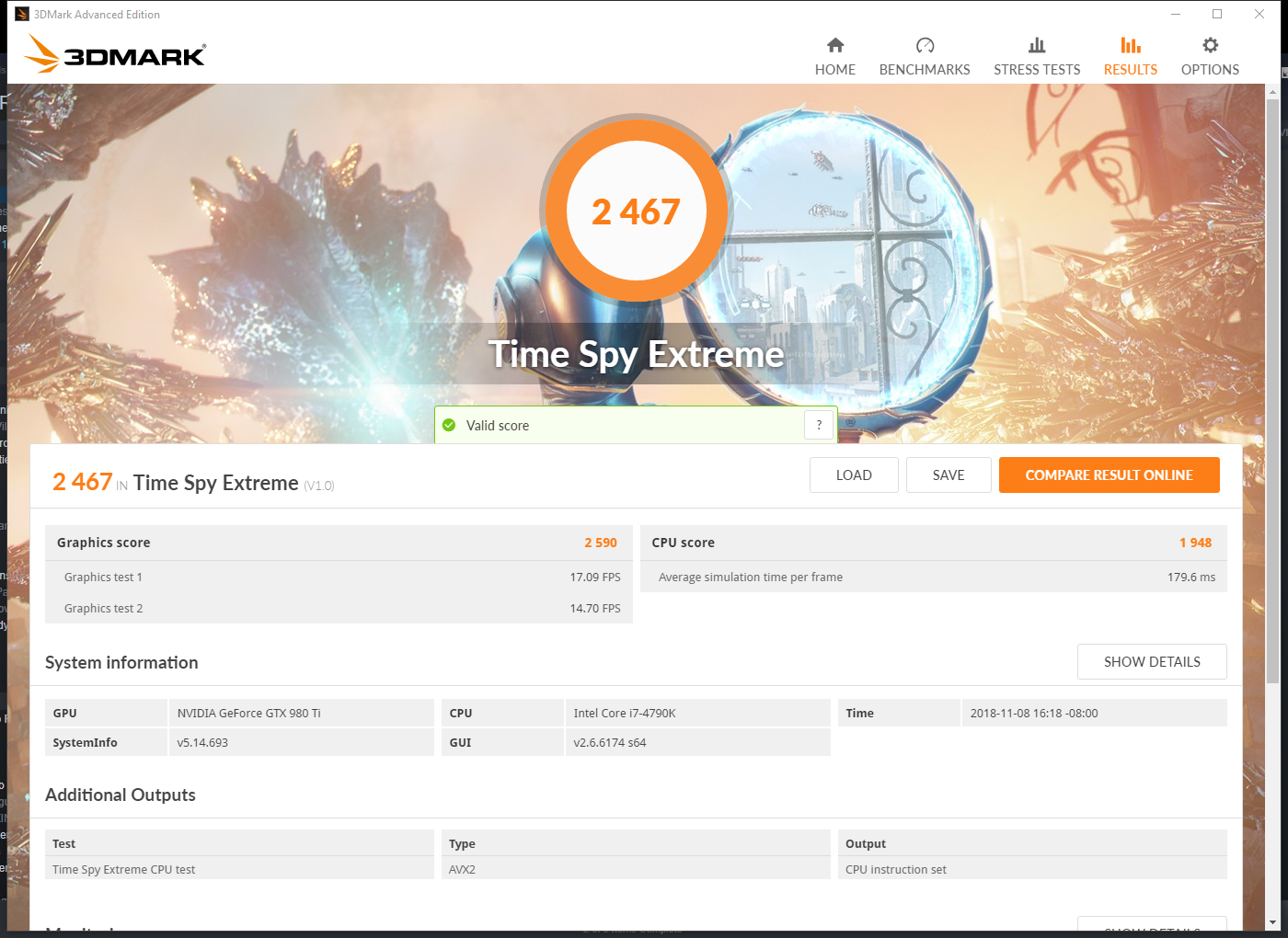 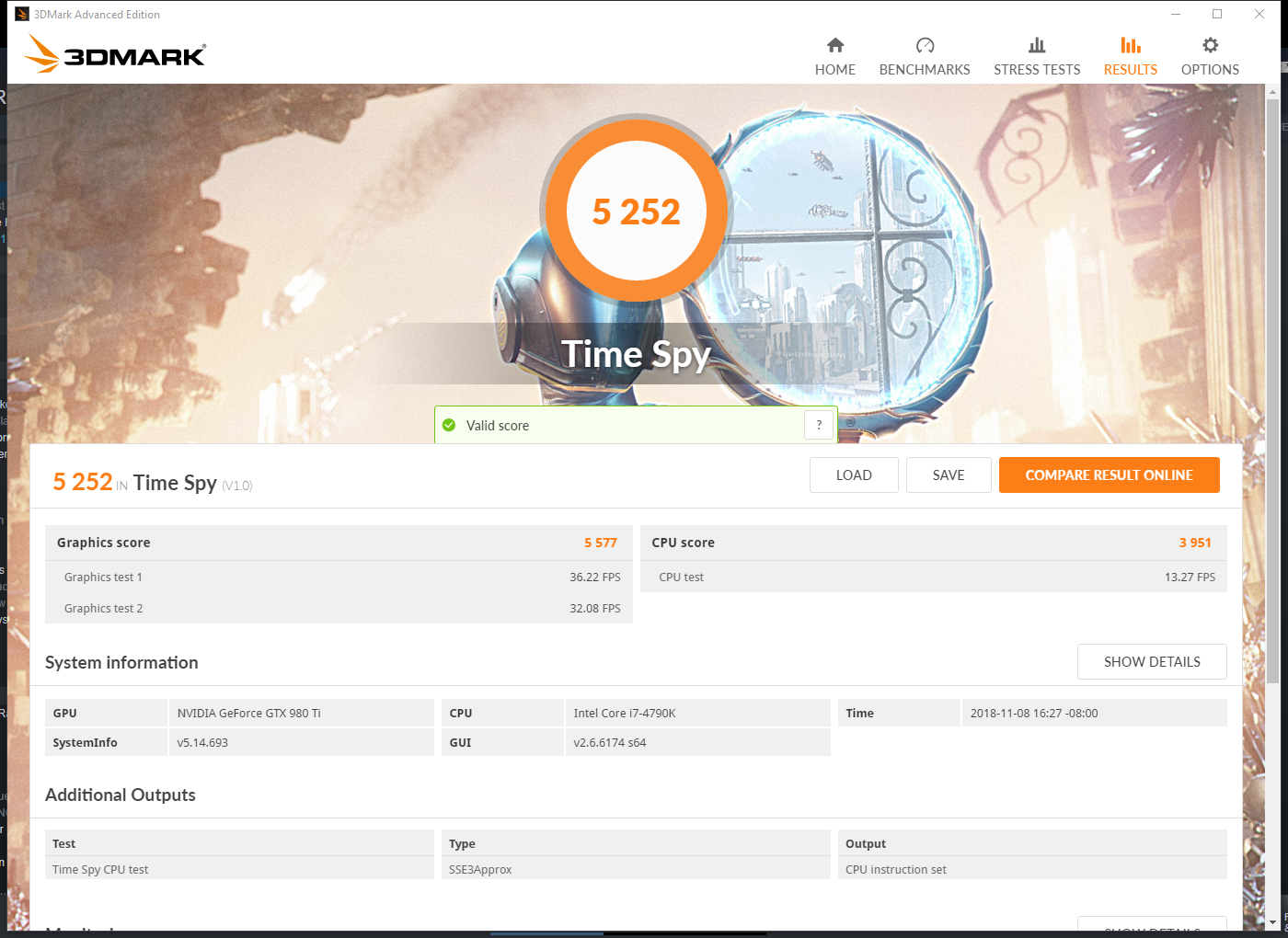 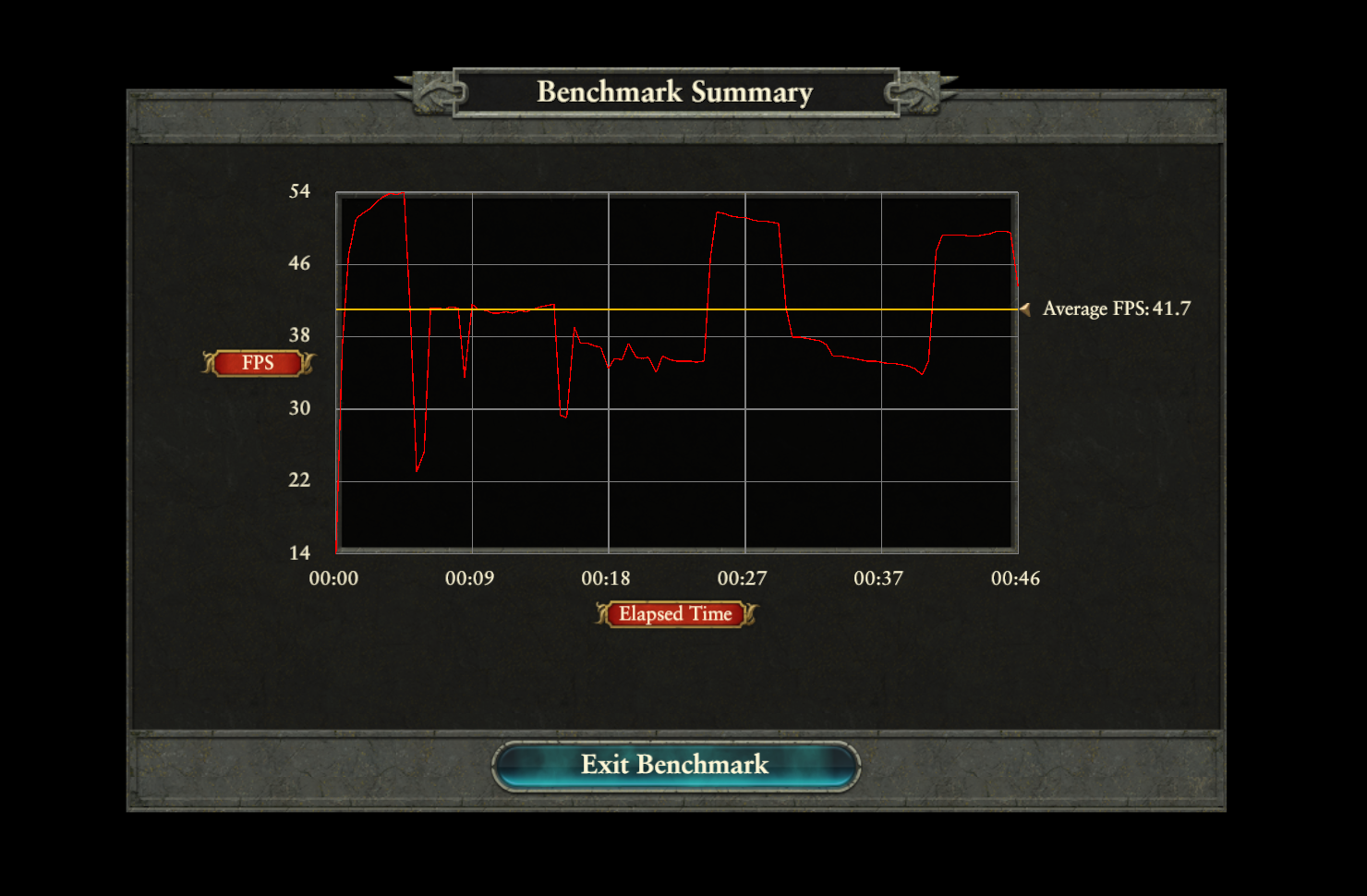 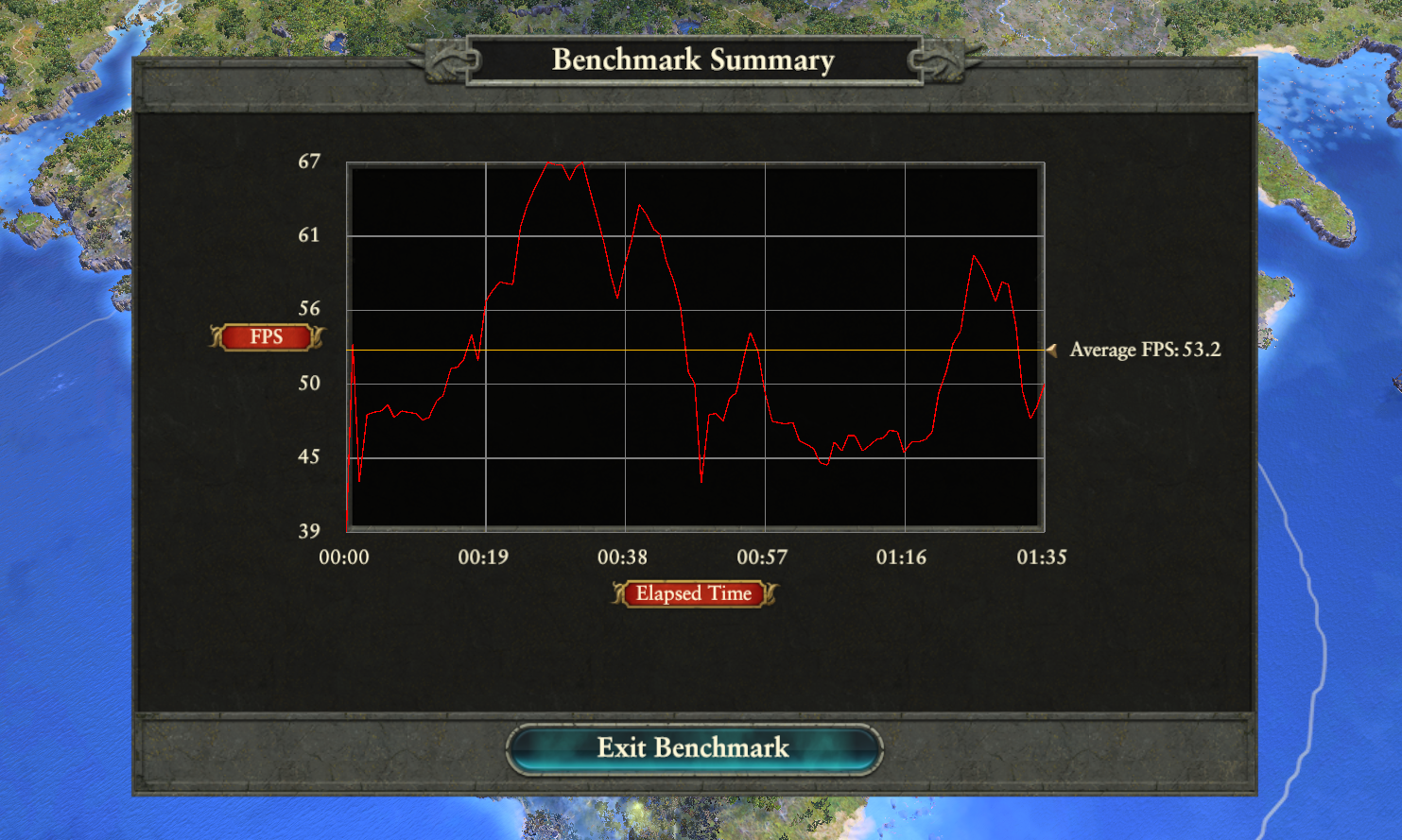 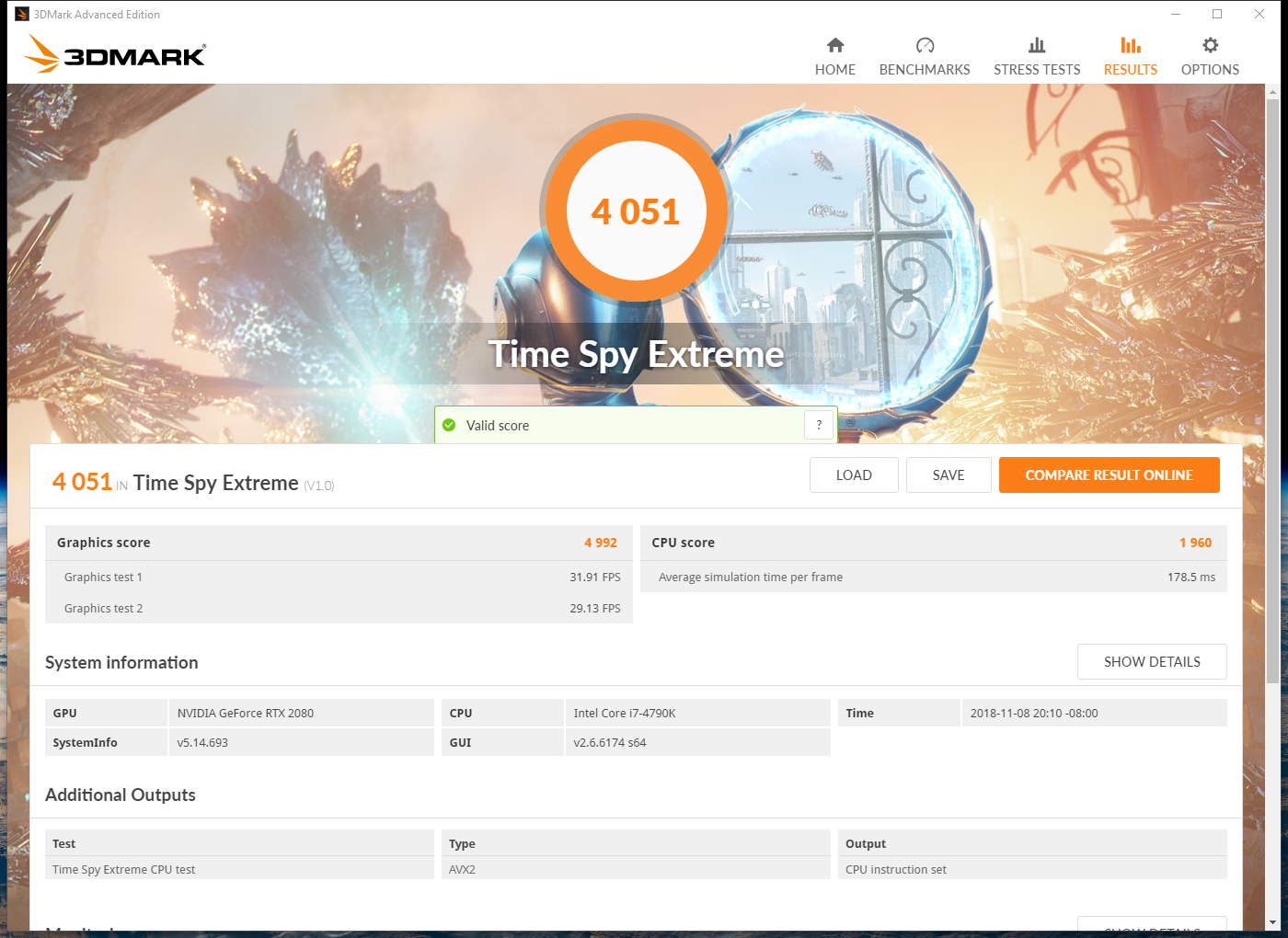 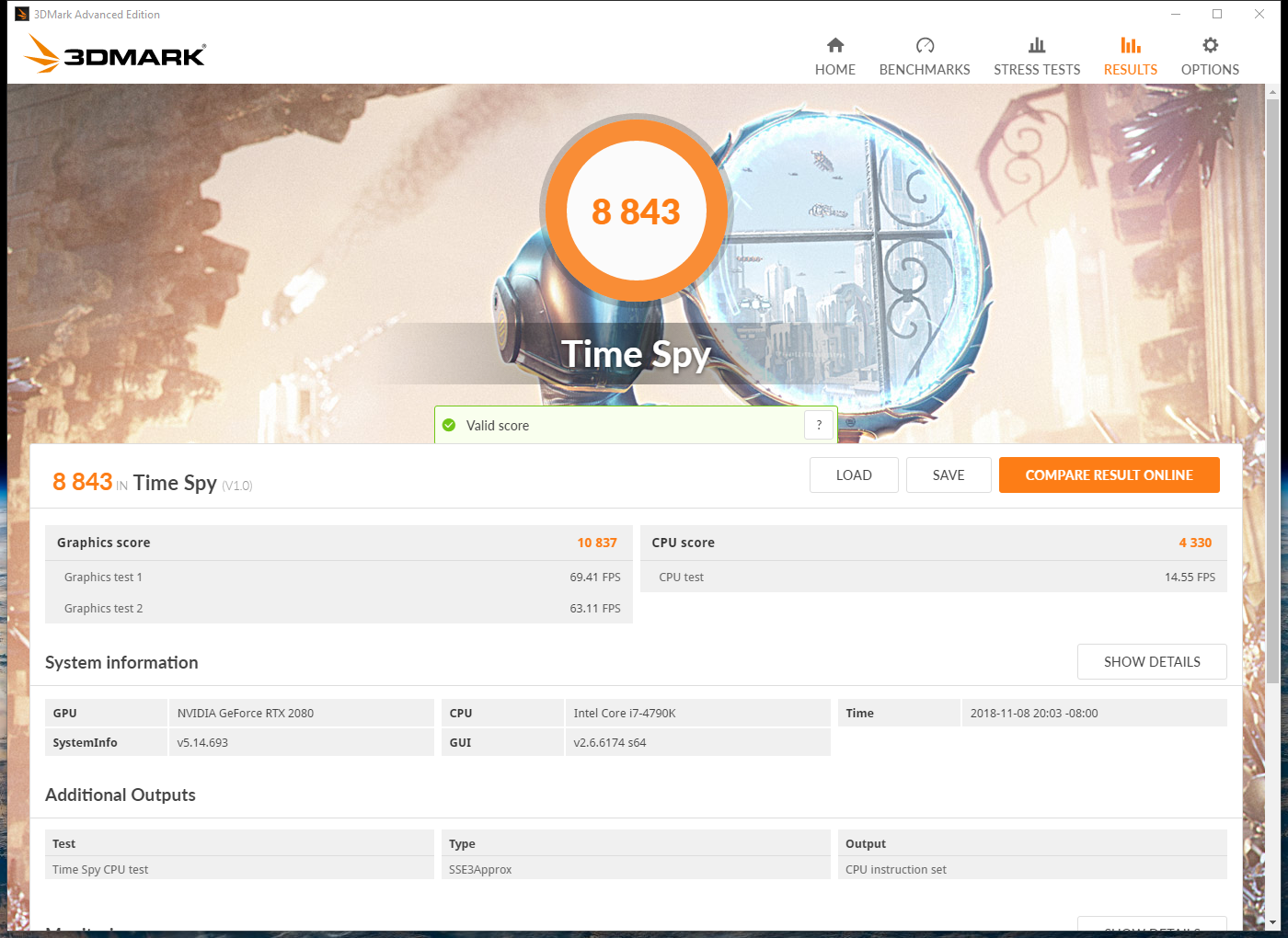