With each update, No Man’s Sky finds new ways to make me obsessed with it. The latest update, the undersea-focused The Abyss, is no different.

The Abyss’s patch notes basically sum up to “makes oceans better.” It diversifies the flora and fauna, makes the underwater areas more bountiful in general, and introduces some new missions.

Last night, after abandoning my peaceful moon in search of a planet with water on it, I set up a base on a new world at the edge of an ocean.

Tentatively, I walked into the surf, and then began swimming. I couldn’t hold my breath for long, but what I saw beneath the waves was beautiful. Schools of fish swam around and in between alien foliage; an armoured clam snapped at me as I tried to grab its pearl; kelp leaves erupted into illuminated bulbs. It made me push myself to swim deeper, testing the limits of my oxygen supply.

Once, I drowned, only to return to the deep, again and again.

No Man’s Sky’s last update, Next, revitalised its universe. The planets have never looked more beautiful, the flora and fauna more varied, the sunsets more melancholic. The Abyss, gives that same treatment to the game’s oceans. I had never bothered with going underwater before—there just wasn’t a whole lot down there. Now, I can’t wait to go back.

Each time No Man’s Sky changes, it becomes better and more interesting. Right now I’m embroiled in a quest to build a submarine.

I hadn’t bothered a lot with vehicles before now, but it’s become clear that I won’t be able to truly explore the oceans without it. What I’ve already seen underwater has been fascinating. I explored an underwater cave near a base I built, and almost got captured by these terrifying Abyssal Horrors, who tried to suck me into their grasp. 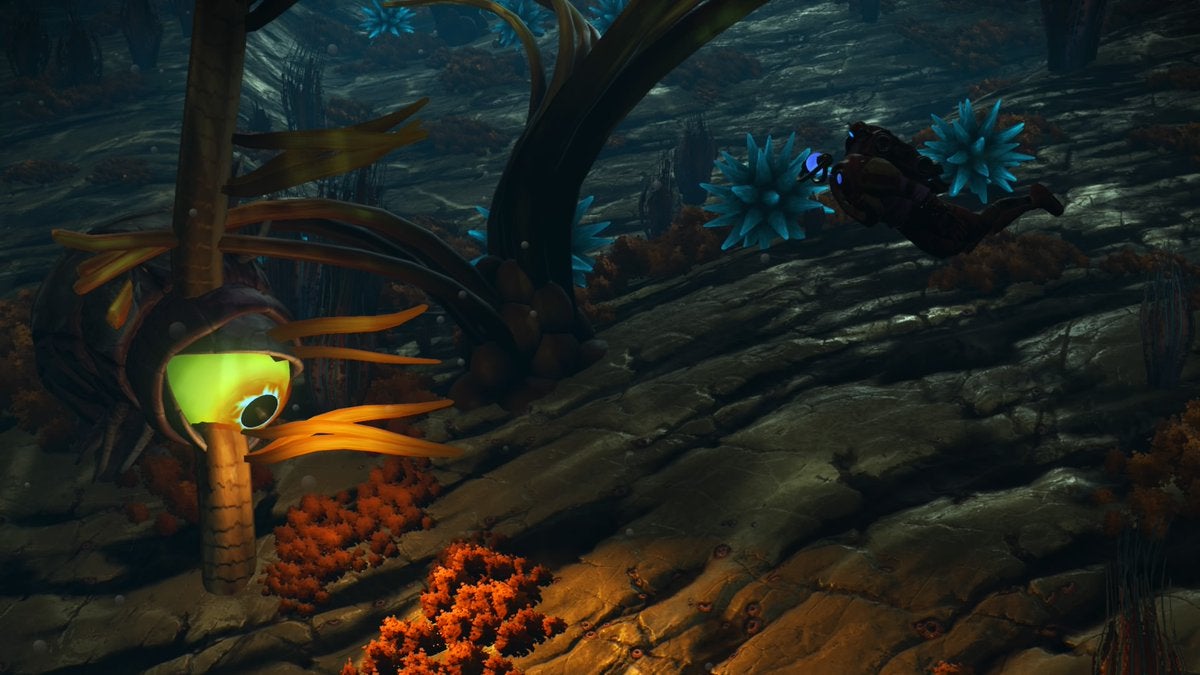 What most impressed me, though, is how well these new features integrate into the systems already present. Now that I have a goal in mind—give me that submarine!—I’m actually seeing more of the game that I hadn’t bothered to look at before.

The Abyss has also opened up a new aspect to planetary exploration by giving me more incentive to try out things I had more or less ignored. Exocraft, the planetary vehicles you can use to explore on land and now by sea, is one of them. In order to do that, I need to figure out how to make money faster, and also to earn nanite clusters, which will get me blueprints for upgrades to my vehicles, multitool, and ships.

I have a quest that will help me find those blueprints, but in order to complete it I need to find new elements, which attracts the attention of sentinels, which means that I need to upgrade my suit for better defensives and find better weapon upgrades.

In order to do that, I need to explore more, inevitably get sidetracked, and run into things like these flying squids: 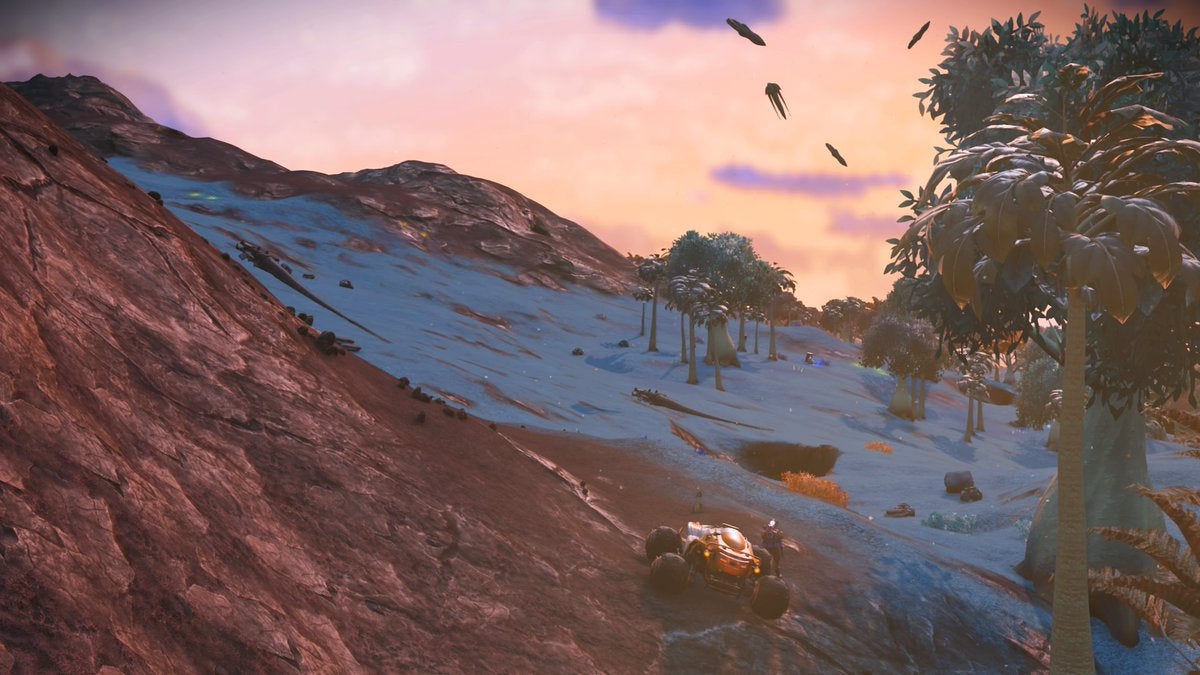 Or this circle of floating crystals: 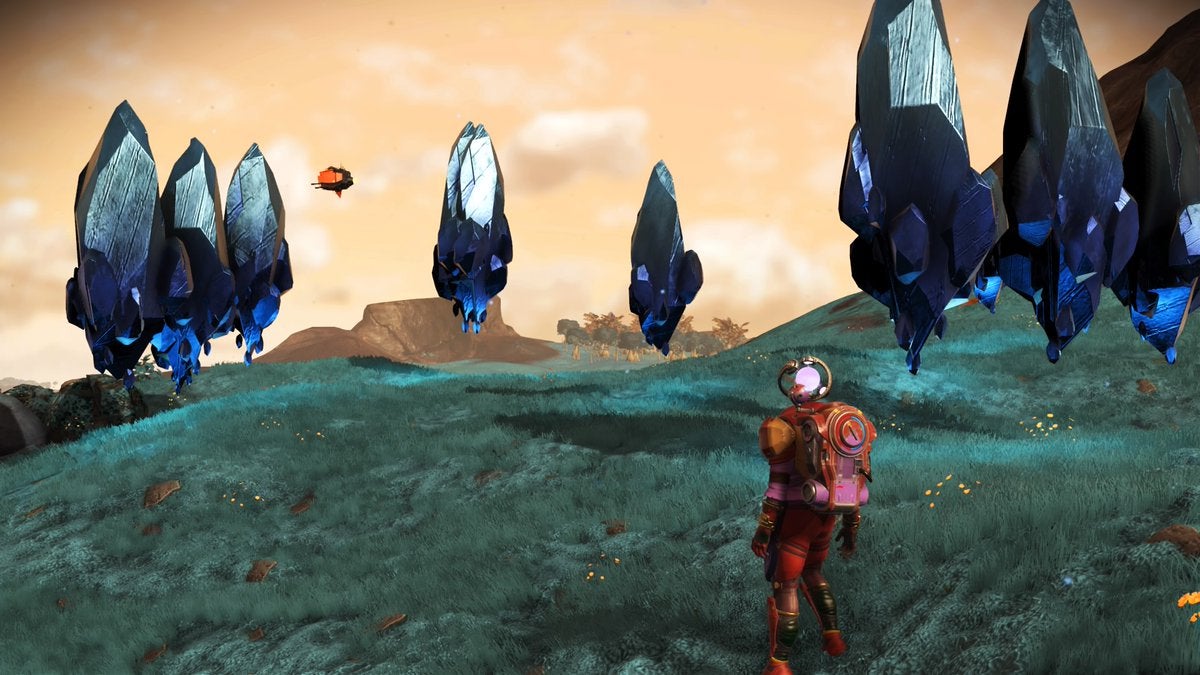 I call games like this “checklist games.” There’s no real guided gameplay, just a series of checklists that players make for themselves that inevitably get lengthened as their session goes on. Games like Dwarf Fortress or Rimworld or even something as calming as Animal Crossing scratch that itch for me, where I need to accomplish goals for myself rather than some urgent gameplay need.

Now that No Man’s Sky has a vast world under the sea, I’ve added a lot of things to my checklist. I’m sitting less than ten feet away from my Playstation 4 as I write this, and the urge to turn it on and cross things off that list is pulling at me like you might crave for a cigarette.

The Abyss doesn’t feel like bloat at all—it feels like Hello Games is gently filling in some colour in their vast tapestry of a game. The Abyss isn’t just new stuff; it makes the old stuff shine alongside it.