Spider-Man: Into The Spider-Verse Is Sony’s Chance To Finally Define Who Miles Morales Is

If you’re reading this blog then you know who Miles Morales, the lead hero of Sony’s upcoming Spider-Man: Into the Spider-Verse, is. But take a moment to really stop and consider just how much you know about Miles. What are his hopes and dreams? What are the things that define his personality? Who is he?

The cyclical nature of comics books meant that for all of Marvel’s fanfare about making characters like Captain America a black man, Thor a woman, and Hulk a Korean-American teenaged boy, there was little doubt that eventually, they would all return those monikers to the white men who originally held them. Miles held onto the Spider-Man title for a good long while, but with Peter Parker’s return to the spotlight, it’s become clear that Marvel intends for him to be the headlining web-slinger, even though Miles does not (yet) have a new code name. But in Sony’s upcoming Spider-Man: Into the Spider-Verse film, Miles is the hero of the story, something that puts Sony in the unique position to give his character a kind of depth that’s yet to be explored in Marvel’s books.

Even though Miles is very much his own person with motivations that have led to his making a number of important decisions that have influenced major events within Marvel’s comics universe, much of his character has been defined by Peter Parker. Not just by Miles’ in-context relationship to Peter, mind you, but rather by Peter’s existence itself and the fact that Miles was originally introduced as a character meant to replace him in Marvel’s Ultimate universe. 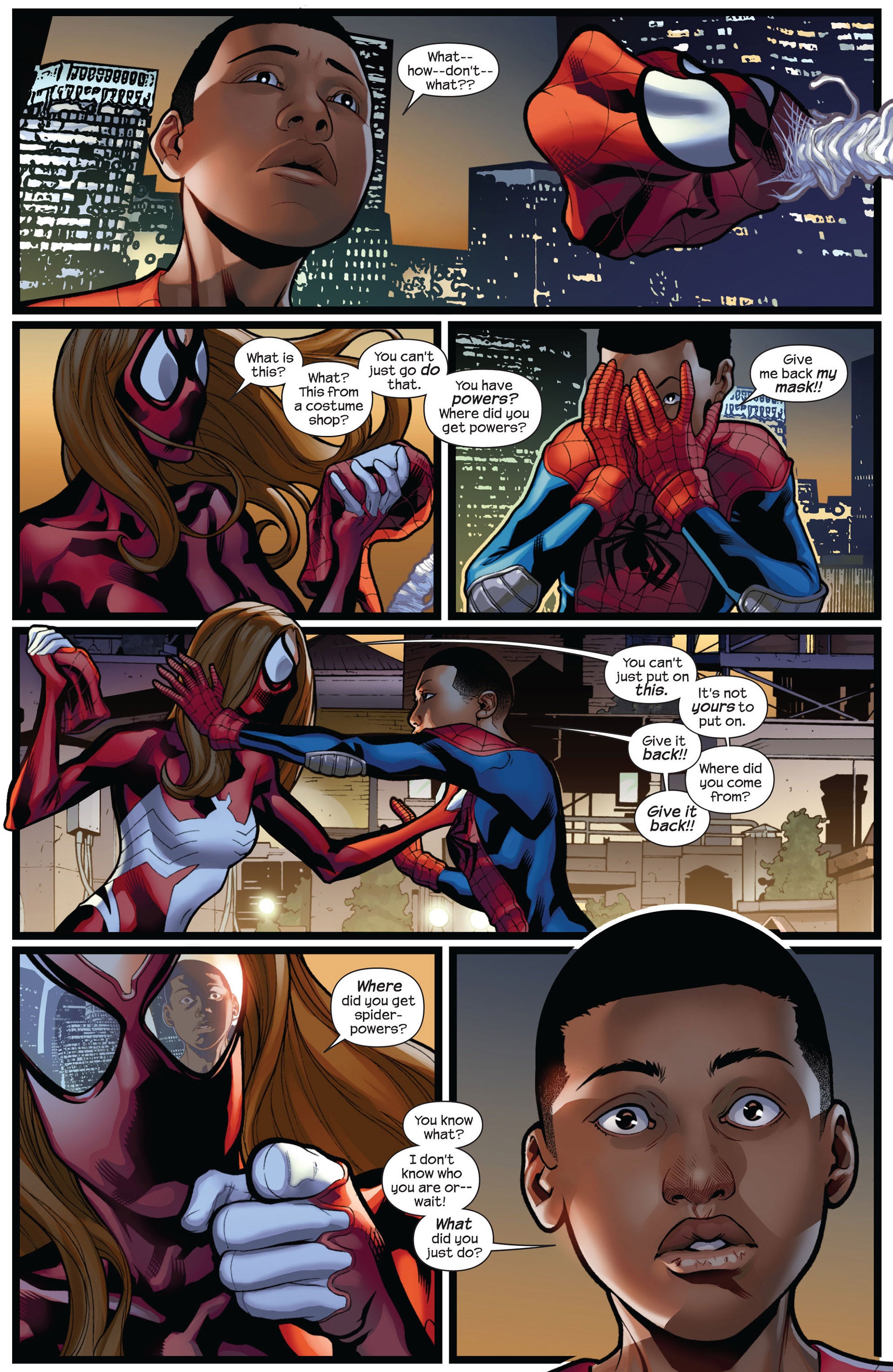 There are many things that, at least narratively, differentiate the two most iconic Spider-Men from one another in immediately apparent ways — Miles, for example, has camouflaging and energy stinging powers that Peter does not. Unlike Peter, a white guy from Queens, Miles is an Afro-Puerto Rican teen from Brooklyn. In most tellings, Peter is raised by his Aunt May and Uncle Ben because his mother and father died when he was very young, whereas Miles grows up with his living parents as a major part of his life. Perhaps the biggest difference between the two of them is that Miles became the long term member of a super team (the Champions) at a much, much younger age than when Peter joined the Avengers.

Despite all of those differences, though, in Marvel’s comics they haven’t exactly led to there being all that much substantive differentiation between Miles and Peter in a larger sense. Because Peter’s a more established character, Miles often tends to read as somewhat derivative and hollow compared to his superhero fore bearer. The specific details of Miles’ upbringing are admittedly not the same as Peter’s, but the fact that one of his guardians’ deaths plays a significant role in his feelings about becoming Spider-Man feels a lot like a spin on Uncle Ben’s death.

The Champions would never admit it themselves, but they’re more or less the latest incarnation of the Young Avengers — and for all intents and purposes, Miles is effectively just that team’s answer to Spider-Man, and the role doesn’t do much to flesh out how he inhabits the role differently than Peter. Miles’ ethnicity and the borough he comes from are things that can have important, subtextual meaning for us as readers. But there’s a way in which they’ve never quite been elements of his being that have carried on-the-page, textual heft.

Miles never wanted to merely be the “black Spider-Man”, and yet in many ways, that’s exactly what he’s been in Marvel’s comics — hopefully, that’s soon to change in Saladin Ahmed and Javier Garron’s upcoming series about Miles. If you take his superpowers and their consequences away from him, what’s left is an ill-defined character who, despite being full of potential and promise to headline stories, fades into the background. It shouldn’t be that way, and because of Into the Spider-Verse, it doesn’t really have to be.

Spider-Man: Into the Spider-Verse is a curious blend of plot lines from Marvel’s books that incorporates elements from both Peter’s (expanded) and Miles’ (less expansive) mythos to tell an origin story that isn’t exactly about origins. By the time Peter and Miles cross paths, both of them have already received their abilities and have been doing vigilante work for different amounts of time. So, rather than focusing on spider bites, the film instead centers their mentor/mentee relationship and the squad of other extra-dimensional Spider-People the pair encounter.

Fighting super criminals is a great way to get to know someone, but the real meat of those sorts of fictional relationships comes from people getting to know one another on a personal level and learning about their similarities and differences. Here, Peter’s a world-weary, middle-aged man who’s clearly been through some shit that we, as audiences who’ve been consuming Spider-Man content for decades at this point, probably don’t need to be schooled on all that deeply.

By comparison, this Miles is someone far less familiar. He’s not Secret War II Miles or Champions Miles or even someone who seemingly grew up in a world full of superheroes who he might have turned to for inspiration. Miles’ backstory and the world that made him provide virtually a blank slate for Into the Spider-Verse, so why not take the opportunity to give him the kind of roots and texture he’s been so sorely lacking in the past?

In his civilian guise, Peter Parker has always been a brilliant, if debilitatingly awkward, nerd type whose knack for invention is only eclipsed by his inability to follow through when he’s made plans with his friends and family. Also jokes. The man adores bad jokes. On paper, that might not seem like all that much in terms of defining a character’s identity, but those character traits have been so thoroughly woven into, deconstructed, and reincorporated into Peter’s characterizations over the years that they’ve become more than the sum of their Spider-parts.

But what are Miles’ “things”? What makes him tick? What kind of music does he listen to? What kind of dreams does he have for himself when he’s not worrying about how to save the world and stay on top of his schoolwork? What does it mean, for him, to grow up black and biracial in today’s Brooklyn and, most importantly, how is his perspective of the world fundamentally different than Peter’s? These are questions you have to be able to answer without really having to wrack your brain in order for characters based on legacy heroes to really begin to shine on their own. Sony has the chance to do just that, and if it does, the studio could usher in an entirely new and exciting era for Miles Morales.