Star Wars: Battlefront II’s early days were defined by controversy after controversy, among them complaints that the initial handful of maps ignored some pretty major battles. What fans really wanted was the massive Battle of Geonosis from the Clone Wars.

Battlefront II largely focuses on battles from further down the Star Wars timeline, with a few maps as the exception. Although it features a rainy clash between clone troopers and battle droids on Kamino and the Wookie planet of Kashyyyk, it heavily favoured iconic battles from the original movie trilogy.

Since launch, players have been asking for Clone Wars-era heroes like young Obi-Wan Kenobi and famous battles like Attack of the Clones’ climatic Battle of Geonosis, which kicked off the Clone Wars. A new update, live today, finally adds them both.

Alongside the addition of General Grievous in October, Battlefront II has now significantly expanded its Clone Wars content, and it’s some of the best stuff in the game. Good enough that I want to stop writing and go play it more, even though ordinarily, I don’t really like Battlefront II. 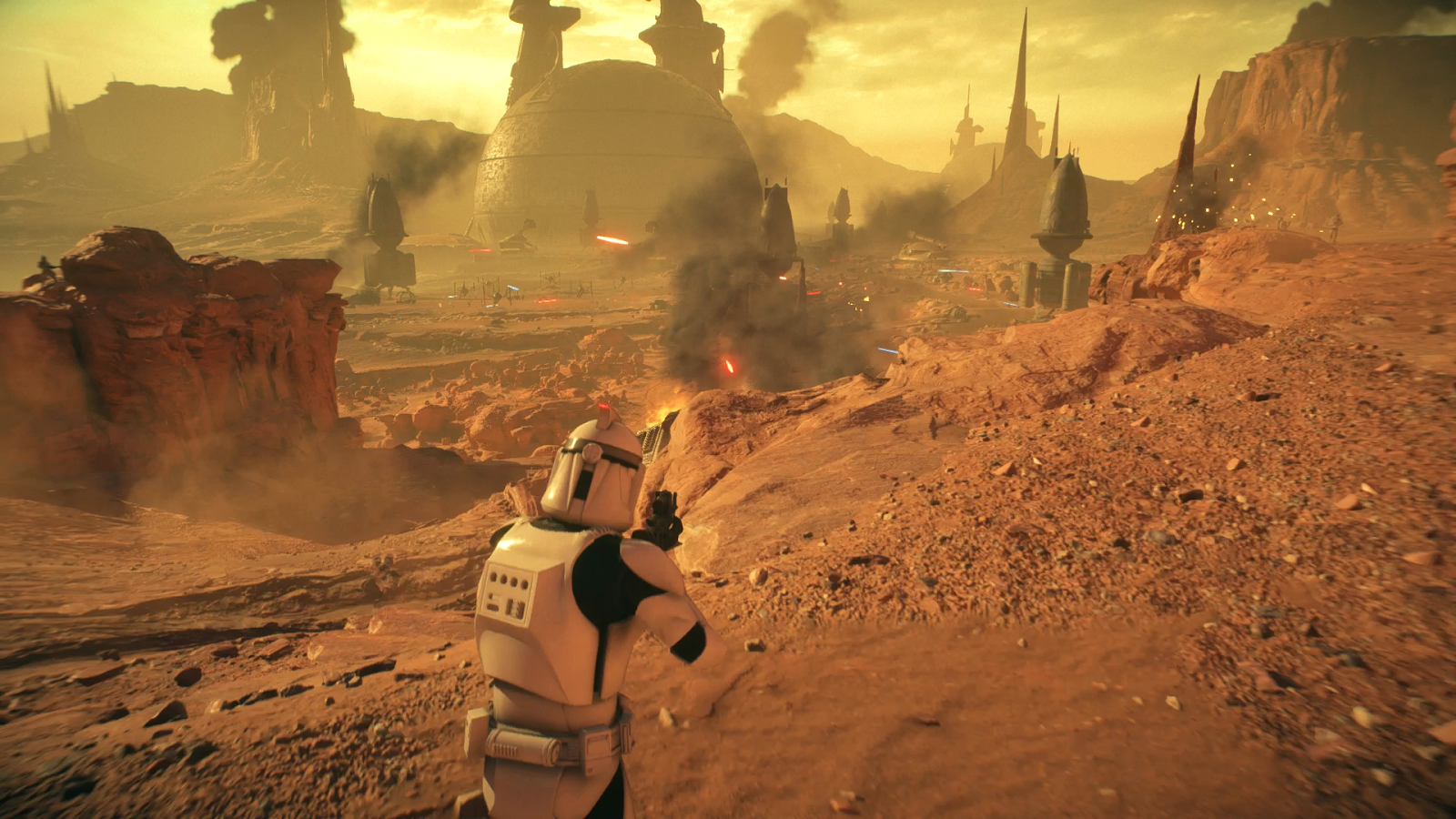 Geonosis plays out as a massive assault similar to the Battles of Hoth or Crait. The Republic team needs to establish a foothold, call in walkers, and escort those walkers as they destroy key targets. Meanwhile, the dastardly Separatists need to dig in deep and hold the line. What makes the map work is how different each phase of the battle is.

The first section is the hardest, forcing the Republic to push through tight canyons to reach a control console that calls in reinforcements. There are tight tunnels and trenches that funnel teams towards each other. Often, it’s a bloodbath for the Republic, but if they push through, the map expands as their attack walkers advance a massive expanse. It feels enormous, each gained inch precious.

Tanks blast at each other, snipers lurk on ridges, and lightsaber-wielding heroes lead the charge. The most memorable segment comes near the middle phase, where collapsing transport ships fall and kick up a massive storm of dust that chokes the battlefield. It feels like Star Wars, in a way that Battlefront II hasn’t always managed to achieve, capturing the scope of Attack of the Clones’ finale while cutting out all of the horrible acting.

While you can play as any unlockable hero during this battle, most will opt to try out Obi-Wan Kenobi or General Grievous. I’m not much of a hero player – I’d rather play the faceless yet badass grunt—but both are fun new additions to the game thanks to how flashy they are.

Depending on which piece of Star Wars media you’re watching/reading, General Grievous is either a hapless schmuck or the most badass dude ever. Battlefront II splits the difference, giving him an ability to run forward while spinning his lightsabers like saw-blades while also granting an absolutely hilarious movement ability where he scampers around on all fours like a chittering spider.

As a result, he feels both terrifying and delightfully oafish. He’ll stand at the frontline, deflecting blasters like a boss until you watch him panic and skitter away. It’s perfect. 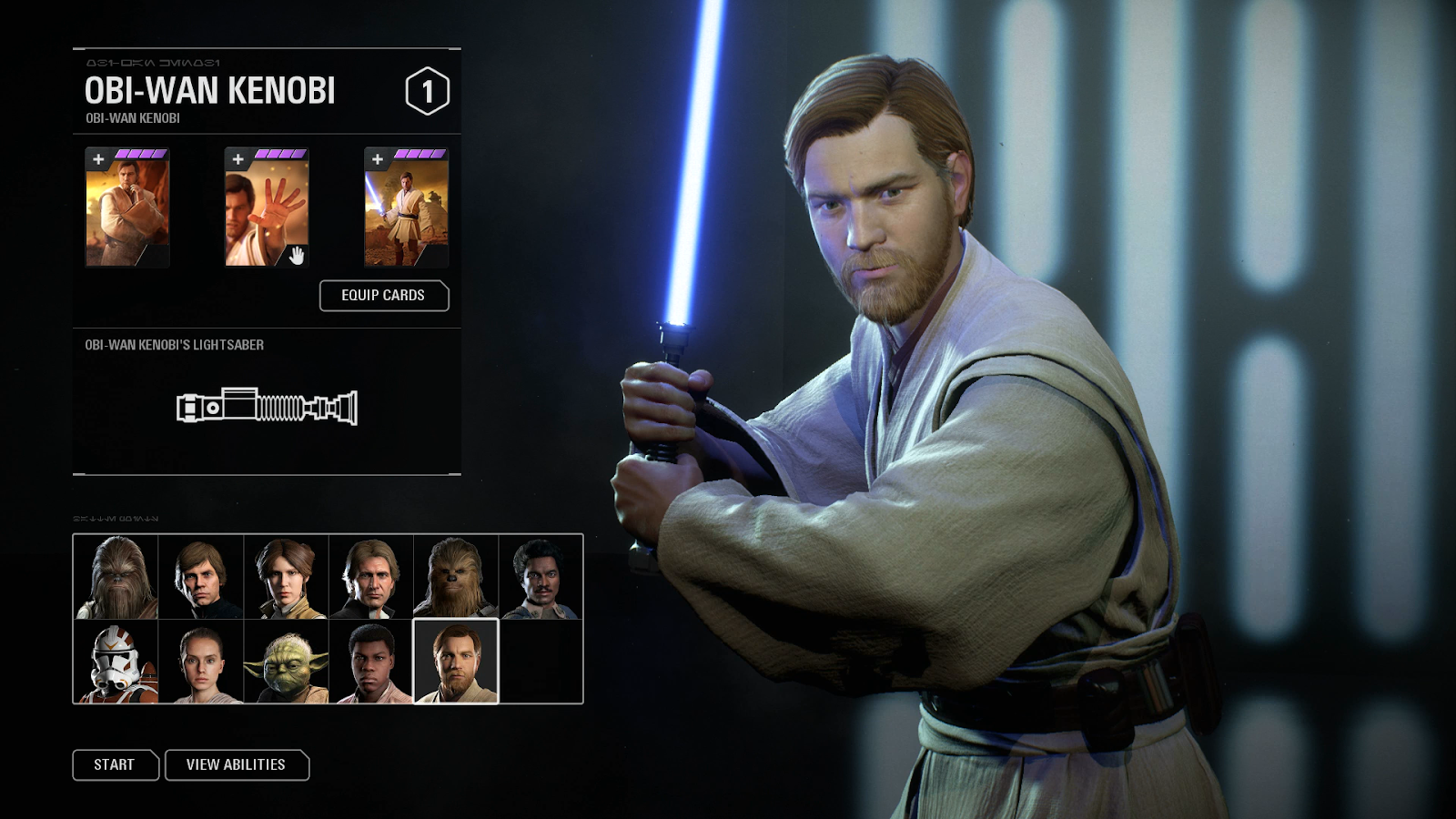 Obi-Wan is more graceful and playful, with defensive abilities and stylish animations that really capture his role as the franchise’s consummate Jedi Knight. He can run forward in an animation that deflects blaster bolts back at enemies, give a massive push with the Force, and use Jedi mind tricks to temporarily confuse opponents and slow them down.

Battlefront II is mostly a game of brute force where you run forward, slash some unlucky morons, and then repeat the process, but Obi-Wan retains just enough technical flair to feel different. It helps that James Arnold Taylor of the Clone Wars and Rebels cartoons returns to voice the venerable Jedi, his approximation of Ewan McGregor’s clipped accent sure to bring a smile to fans’ faces.

Battlefront II has been a game defined mostly by disappointments—microtransactions, an inconsistent story DLC, and slipshod movie promotional events.

But the new Clone Wars content is fun, adventurous and the best part of the game. Geonosis and these new heroes capture some of the magic of 2005’s Battlefront II, offering exotic and swashbuckling battles with captivating spectacle and tense back-and-forth. It’s the sort of grand experience the game had fallen short on, and it’s damn good to see.