Tetris Effect takes the pure, near-perfect game design of the classic puzzle game and injects a cocktail of hallucinatory visuals mixed with a sublime soundtrack. It’s a refreshing, modern update to a classic with an optional virtual reality component and more than anything, it’s also the kind of game that I think we desperately need right now.

The core foundation of Tetris remains mostly untouched. Blocks fall, and you use them to set up stacks of complete rows of lines to clear from the screen. It’s a beautiful composition of construction and destruction that makes your brain fire on all cylinders.

With Tetris, if you take a second to glance at your phone or answer a quick question, you can ruin a good stack that could prove to be nearly impossible to fix in the long run. And with Tetris Effect, applying that level of intense focus rewards you with a rich sensory experience, too.

The game is also playable using PlayStation VR, which takes things to a different plane. The game is no longer trapped in the flat rectangle of my TV but envelops me. The Tetris board still stays in front of you, but the scenery and effects curve around into your peripheral vision. As I played, I drifted past New York City’s streetlights to the the top of a snowy mountain with a view of the Northern Lights.

We’ve all either seen, read or heard about immersive VR. With Tetris Effect, removing all forms of distraction like ambient light or my cat’s awkward stares, amplifies my focus even more. It is the perfect marriage of two favourite games of mine, the block-dropping Lumines and the trippy musical journey Rez.

That’s natural, given that the lead visionary behind those games, creative director Tetsuya Mizuguchi, is the main one behind Tetris Effect and has been wanting to make something like this for over 15 years.

Even if you don’t have PlayStation VR, killing the lights in the room and throwing on a solid pair of headphones still gets the job done. With a phenomenal score by Hydelic, the same team that made the music for Rez Infinite‘s Area X, you get a great musical experience that benefits from high quality headphones or speakers. And if you’ve got a PS4 Pro and a fancy 4K TV, Tetris Effect runs at 60 frames per second and looks stunning.

In addition to the particle effects and synthesisers, there are some gameplay changes under the hood. The game’s Journey mode offers players 27 uniquely-themed levels that all feature original songs. A level called Forest Dawn, for example, surrounds the Tetris board inside of a forest just as rain begins to fall. Another starts you off inside of a space shuttle and ends with you orbiting the Earth with satellites.

One thing I loved about Journey mode is how the speed of the falling blocks will pick up as the music’s tempo increases. If you actually manage to push through to the next section, the speed of the falling blocks slows. This allowed me to take a breath after pushing past what I thought were my limits. The game’s difficulty ebbs and flows along with the music and its corresponding visuals. Mizuguchi, the game’s creative director, told me that that flow is “like daily life.” I love that. 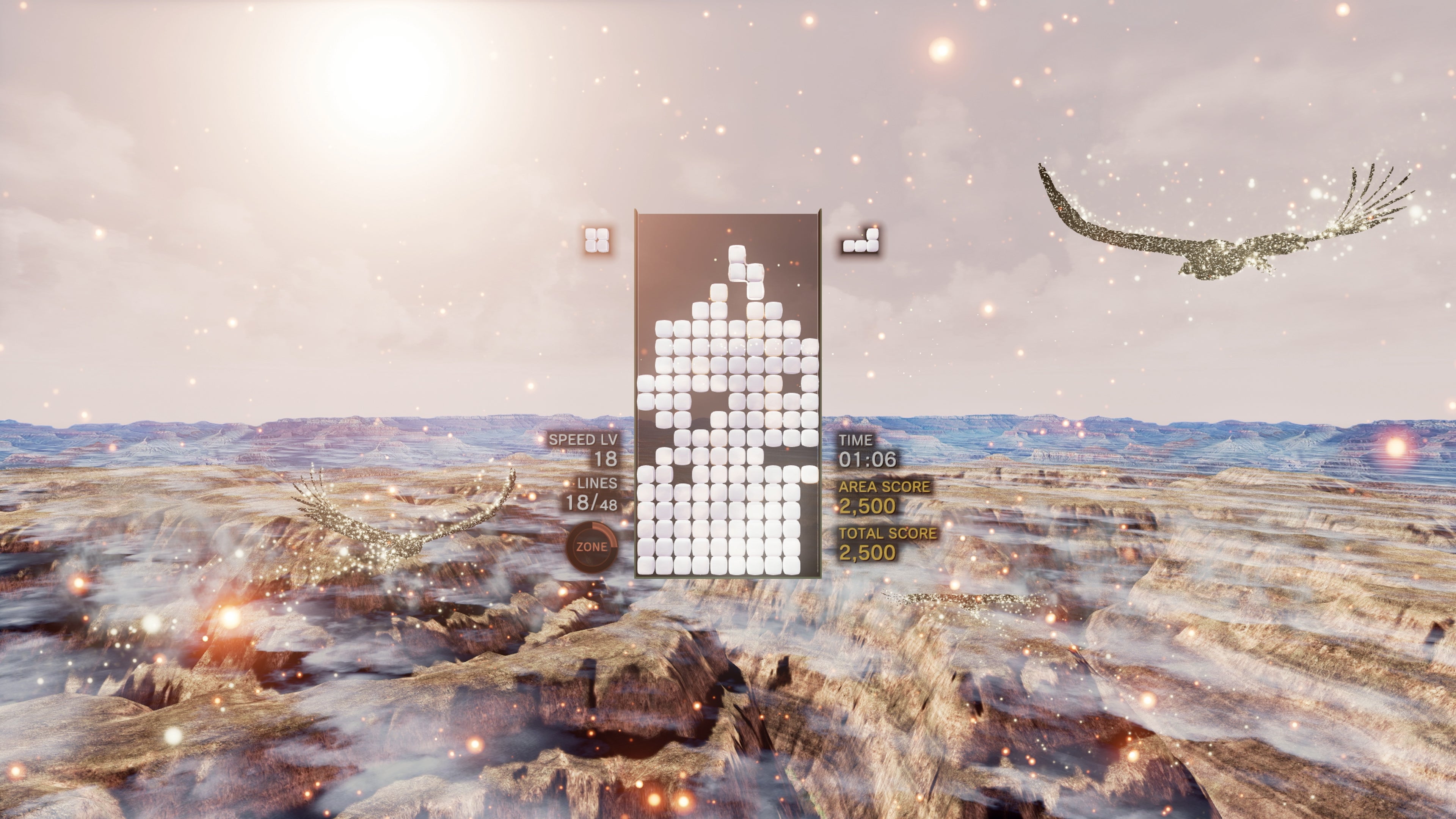 Just like my own daily life, sometimes I need time to collect my thoughts or approach a problem from another angle. Clearing lines and landing combos fills your “Zone” meter, which gives you the ability to do just that. So when I find myself stuck in a sticky situation with too many errors on the board, or when I want to rack up points, activating zone freezes the rate at which Tetrominoes fall.

Clearing lines in zone mode pushes them down to the bottom and brings up anything trapped underneath so the player can fix it. It’s a mechanic that can provide a lifeline to newcomers or a way to rack up points for Tetris masters.

There is a certain level of peace that the game brought to me after playing it in VR. It boiled down to one moment. I was playing the game and was initially smiling at the trippy visuals and incredible sound design. After a few minutes, I could feel myself calming. My muscles relaxed and my breathing slowed down. I remember taking a deep breath and letting out a long sigh. I forgot about my day or what horrific thing was in the news and just allowed myself some time to sink deeper.

Tetris Effect allows me to be selfish in that way. I can tune the world out and focus on completing this simple task in front of me while the vibration of the controller matches the notes ringing in my ear drums and the glow from the visuals. Like one of the game’s best songs says: “it’s all connected.” 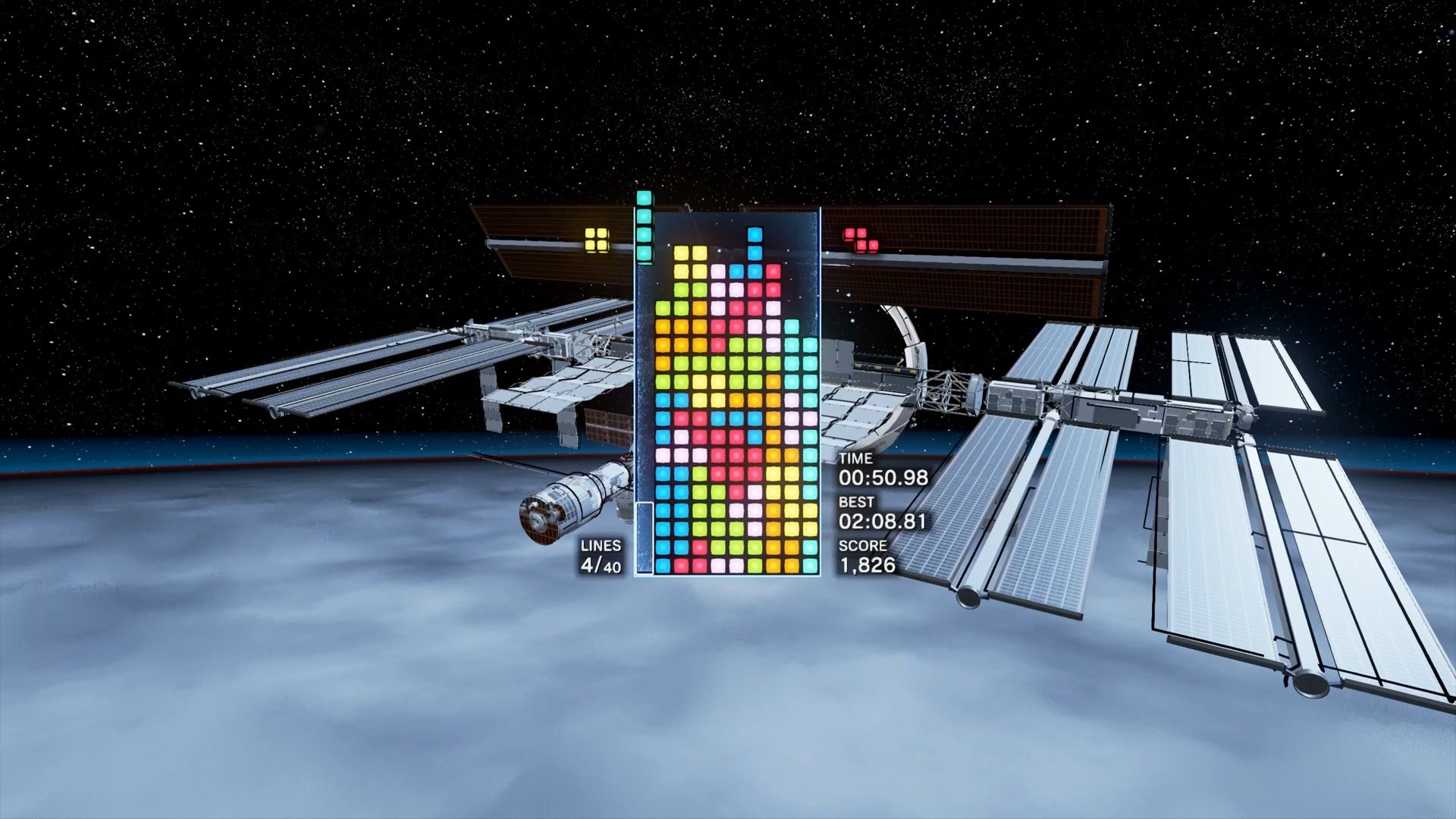 If you would rather play what Mark MacDonald from the game’s production team calls “Tetris-arse Tetris,” purists will be happy to hear that you can customise your experience a bit and even tone down the visual effects. There’s an option to use standard coloured Tetrominoes in favour of the custom-themed ones for each level, if you find the game’s custom colours too distracting.

Beyond Journey mode, the game also offers 15 “Effect Modes” that range from the classics like Marathon to Focus modes that task the player with completing objectives like clearing specific lines. Focus made me use pieces in ways I’ve never thought of before. For times when I might wanna just cool out and play some low-risk Tetris, there are also Relax modes that even remove fail states.

The last category of modes is called Adventurous and features a mode where you need to survive random effects that are thrown at you like huge blocks or playing the game upside down, which, surprisingly enough, my brain got used to over time.

I do wish that there was a mode that let me play around with the game’s spiffy new Zone mechanic that shows up in Journey. I’m happy to go back into the main game to play around with it, but I would have loved a mode that challenged my zone skills or taught me different ways to utilise them.

Another thing missing from the game is the unfortunate absence of multiplayer. Despite the lack of direct multiplayer modes, there are still leaderboards and the option to unlock avatars that you can show off in the Effect Mode menu where you, your friends and other players orbit the Earth with your corresponding points levels listed.

There are also chances of getting rare event-based avatars that Enhance says can be unlocked during 24-hour “Weekend Rituals,” by working together to complete specific goals like reaching a designated score total for the entire community. 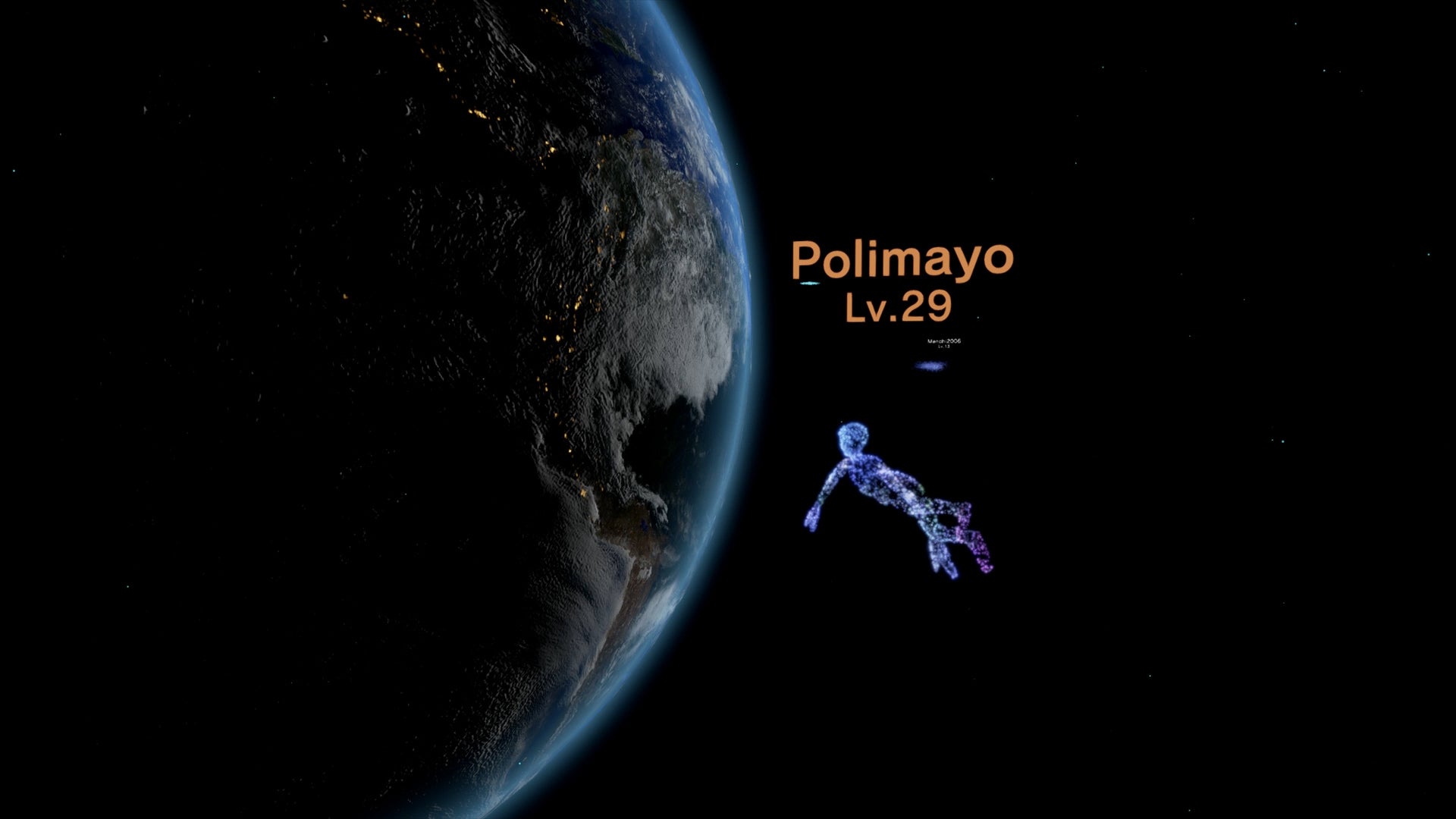 Some might consider $US40 ($55) for Tetris to be too steep of a price for a game that is often looked at like a cheap toy. But Tetris Effect is also trying so many new things with those pure mechanics by continuing to evolve what is an already meditative experience. Sure, if you’re competitive and want to stick to Tetris: The Grand Master or even NES Tetris, go right ahead. Tetris Effect doesn’t replace those. It complements them.

Tetris Effect‘s Journey mode even has a really subtle narrative for you to either absorb or passively appreciate as you play along. That subtle narrative doesn’t come out through voice-acted cutscenes, but through song lyrics and the accompanying visuals.

The game’s first level shows the Earth looming off in the distance, sea life made up of glowing particles swimming around me, while a beautiful voice sings “We’re all connected in this life. Don’t you forget it.” It’s a beautifully poetic reflection on life that took me on a journey throughout the universe and reminded me that I’m just as much a part of it. It’s equal parts therapeutic and daunting.

The ending even made me a little emotional, and I’d never expect that from Tetris. For newcomers or people who haven’t played in a while, it’s a fantastic place to jump back in.

In recent weeks, I’ve played and enjoyed three big-budget open world titles that are different flavours of the tried-and-true power fantasy or the heightened tension of yet another bloody battle royale. It’s nice to see that a puzzle game asks me to relax and tune the world out for a bit.

And after hearing about atrocities on a weekly basis, sometimes the last thing I want to do in a game is virtually fight someone or pick up a fucking gun to relax. It’s a game that checks in on me and reminds me that while the world might seem like it’s falling apart, there is still beauty to be found and a goal worth continuing to work towards. I think that’s something we can all use right now.