The Inexplicable Sexiness Of Ivy Valentine

Ivy hasn’t changed much throughout the life of the series, but I’ve changed my mind about her many times over the years.

Ivy wears a purple thong leotard with cut-out pieces that bare her cleavage and midriff. The detailing and cut of her bustier has changed slightly from game to game, but every version of her look keeps the full curve of both buttcheeks and breasts in view. She pairs this with thigh-high boots, shoulder armour, and a sword that transforms into a whip.

When she slings that whip at her opponents, she points her toe and rests a hand on her cocked hip, as though posing for the camera – or the player.

Usually, if a female character is that sexy, there’s some sort of narrative reasoning, however thin. Soulcalibur, now on its sixth entry, has had many opportunities over the years to justify Ivy’s overt sexiness.

But, no: she’s still just as I remember her as a high school girl playing the first Soulcalibur on the Dreamcast. This is also true of the rest of the female fighters in the game, but Ivy has always been the least subtle of the bunch.

Ivy’s aesthetic began with her convertible whip-sword. The design team had multiple concepts for the kind of character who might wield it: a mummy, a young girl, an armour-clad guy. In the end, they chose Ivy Valentine: a tall, silver-haired woman in a waist-cinching, bust-baring thong leotard.

Although Ivy’s core look hasn’t changed much since those initial drawings, there is one detail that has since faded away. There was once an alternative outfit for Ivy, which ended up appearing as a secondary option in the first three Soulcalibur games: a butch pirate suit, complete with breeches, a lacy neck ruff, and golden-fringed epaulettes.

She still wears her high heels, eyeliner, and earrings, but she slicks back her hair, looking severe and cold. 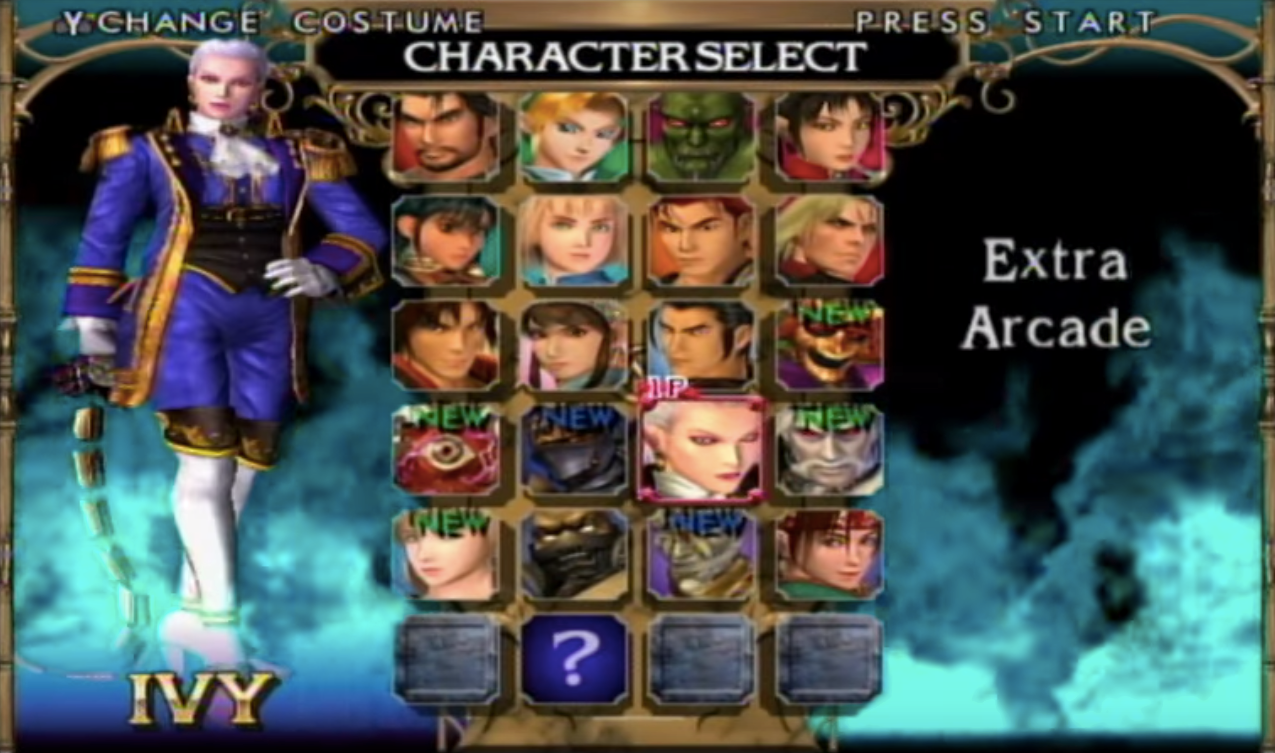 This outfit makes sense for her storyline. It fit her aristocratic upbringing and foreshadowed the reveal of her biological father, the undead pirate Cervantes. After the first couple of games, though, Ivy’s alternate outfit design stopped being as butch and slid back over to more conventional and feminine. From Soulcalibur IV onwards, her secondary outfits featured fishnet stockings and bodysuits with plunging necklines.

Why does this woman, who was raised by an aristocratic family, waltz around medieval Europe in lingerie and knee-high boots? Her paper-thin backstory doesn’t offer much explanation. She has no romantic or sexual storyline. She can be quite condescending, but ultimately, she fights for good and chooses to help rather than hurt. So why the whip and the whole domme vibe? It feels like sexy for sexy’s sake.

Since she’s wearing the most impressive push-up bra of the cast, Ivy is the most obvious scapegoat when it comes to pointing out Soulcalibur’s inexplicably sexy designs, but the game’s treatment of other, less busty female characters is not an improvement.

It’s never explained why Seong Mi-Na is wearing an underboob-baring top that offers her breasts no support whatsoever, and which is made all the creepier by the fact that she’s only 16 when the story starts. Wind priestess Talim, who is just 13 in Soulcalibur VI, wears a tiny X-shaped tube top that criss-crosses over her nipples and a string bikini bottom that pokes out of low-slung shorts. Putting the series’ two youngest and most innocent characters in bikinis seems unnecessary.

It’s also not clear why Taki’s erect nipples are always visible through her cleavage-hugging bodysuit, nor why Sophitia can’t seem to find a lace-up top that contains her cup size, but at least they’re both adults.

These outfits don’t tell us anything about the characters wearing them. Sometimes, they directly contradict the stories and personalities of the women in them (insofar as anyone in Soulcalibur has a personality). The teenage Seong Mi-Na hopes to enlist in the men’s only coast guard, while also wearing a bikini, which – fairly or not—does seem like it would add a layer of difficulty to succeeding in an ancient patriarchal society.

She complains often about still being seen as a child, but in her storyline, she’s being romantically pursued by a man who is nine years older than she is. Maybe he sees her as an adult, or maybe he gets off on Seong Mi-Na’s naivety – either way, it’s rough. If this storyline gave Seong Mi-Na any agency, then maybe the decision to put this insecure teenager in this outfit would feel less tragic. 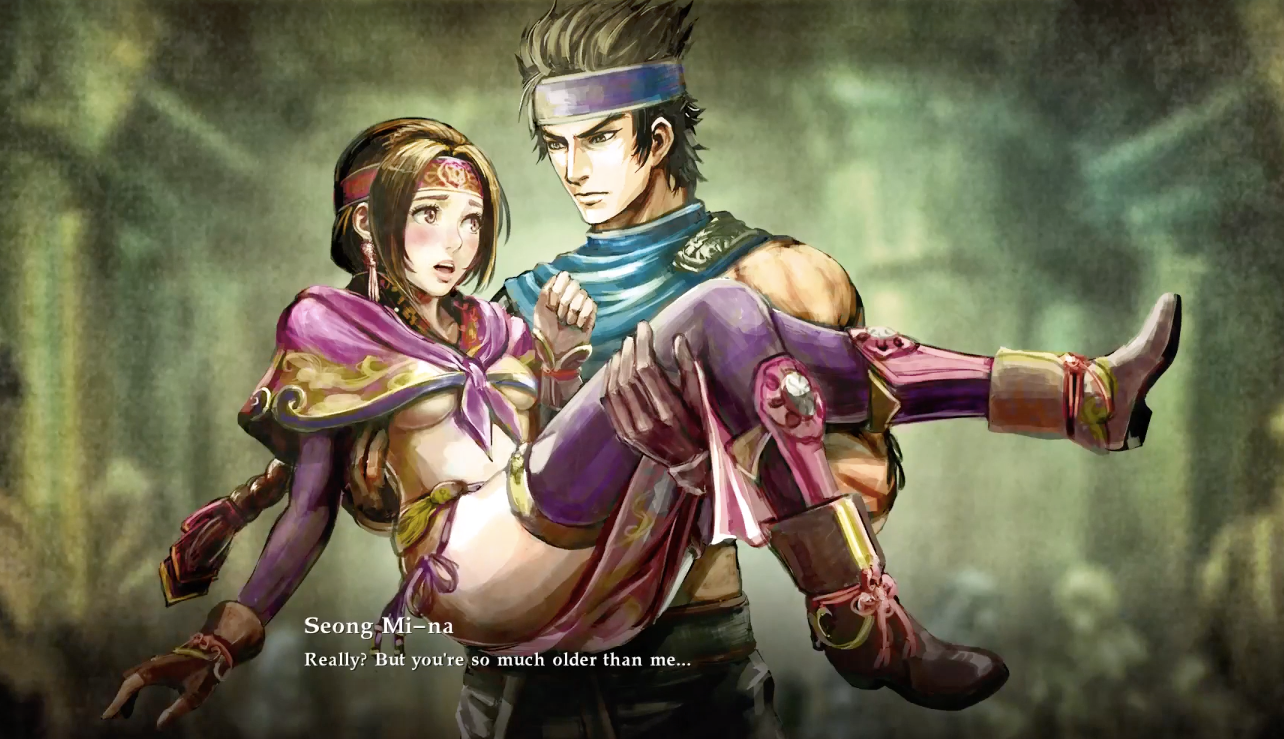 Over the years, I’ve seen fans create comparison charts of the female characters’ boobs and outfits in each successive Soulcalibur game, trying to map their changing cup sizes and the relative revealing nature of each outfit. This sort of comparison tends to be done with good intent, as though there could be a mathematical equation to dictate when the plunging neckline on Sophitia’s blue lace-up top goes from “classy” to “trashy.”

But that dichotomy spirals out into suggestions that certain bodies are inherently inappropriate and shameful, with no regard for the actual women in the world who also share Ivy’s cup size, who grew up playing this game and hearing pejorative descriptions of her body.

A ComicBook.com article about Soulcalibur VI refers to Ivy as a “scantily clad boob monster” not once but twice. Metro’s coverage of the game described Ivy’s “design and attire” as “problematic” without mentioning the other female fighters, presumably because Ivy is the go-to example.

In one Twitch stream that I watched of Soulcalibur VI, the hosts joked that Ivy Valentine was “not stream-appropriate” and didn’t select her, although characters like Talim and Seong Mi-Na didn’t seem to embarrass them.

This question of “appropriateness” isn’t about Ivy’s outfit, because there are other girls in bikinis in this game. It’s not about her storyline, since Ivy’s backstory doesn’t involve her getting disempowered or disrespected. It’s her breasts. The implication is that the only way she could be respectable would be if they were covered up, or reduced in size—something closer to the cup size of bikini-wearing tots Talim and Seong Mi-Na. 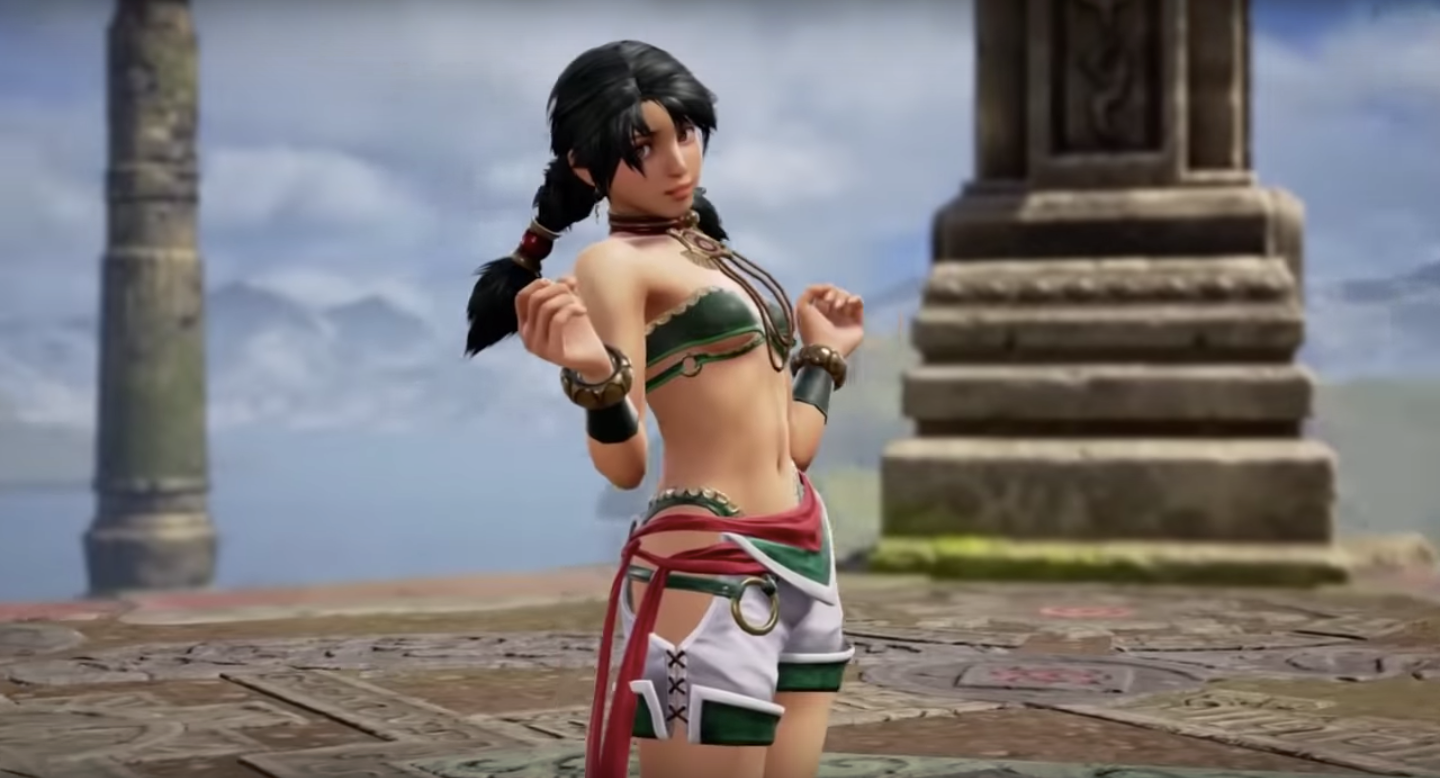 That’s why, even though it would be more interesting visually and more logical narratively for Ivy to put on her full pirate suit, I’ve grown defensive of Ivy’s tiny bustier. It makes no more or less sense than anyone else’s low-cut top in this game. When I see other players on Twitch or in real life expressing discomfort over Ivy, my hackles rise on her behalf.

But I also understand the snap judgements people make about her unapologetic, unjustified sexiness. At one time, I felt that way about her, too.

As a young teen girl playing Soulcalibur for the first time, I had a knee-jerk, naive perspective on all of this. Back then, I hated and resented Soulcalibur’s women. It bothered me that every one of them had the same exact body type: a model hot body that in no way resembled my own.

Even back then, Ivy was seen as the sexiest, at least according to the guys I knew. I felt embarrassed about selecting any of these women as my avatar, thinking it would only invite an unflattering comparison between their digital perfection and my prepubescent gangliness.

My male gamer friends teased me enough as it was, and, more than any other game we all played together, Soulcalibur felt like a long list of the things I wasn’t.

In my late teens, I finally made friends with some other girls who played competitive games. One of them, to my shock, chose Ivy every single time, even as Soulcalibur II, III, and IV brought Ivy’s breasts and bustier into increasingly higher and sexier detail. My friend never seemed embarrassed by her choice.

When we went to arcades, she’d take on any foe, defeating boy after boy while standing triumphantly at the arcade cabinet. Ivy would sling her whip with a sneer and make men kneel, weeping, at her feet.

I started to see Ivy a little differently after that. She was still a sex symbol designed predominantly by men. But, in my friend’s hands, she had become something else.

By Soulcalibur V, I had stopped feeling so resentful and bitter about the women in the game. I stopped being so angry at women in real life, too; I even started dating them. As an adult, I learned that the popular girls who I’d once resented, the ones who’d gotten bigger breasts ahead of me, hadn’t exactly enjoyed it.

They’d had trouble finding clothes that looked “appropriate.” Their bodies had become fetish objects, tools outside of their control. It wasn’t fair, I thought. And someone else should suffer for it, possibly with a whip involved.

portrayals of sexy women, especially dominatrixes, in games like Bayonetta and Drakengard 3, I want to be able to analyse Ivy Valentine with the same rigour.

But much like her adorable bustier after a hard hit, she’ll snap under the pressure. She can’t withstand scrutiny.

No Soul game has ever humanised, or scarcely even personified, Ivy Valentine. Soulcalibur VI had the chance to do it, since the game revisited the early events of Soulcalibur I and II, casting new light on the characters’ backstories and also putting them back into their old outfits once again. But the opportunity went unfulfilled. Ivy is still the same. She is still no one.

And yet, she is someone whenever I select her. She’s me. Of course, I’m the one doing all the work in that equation. I’m the one manifesting her humanity. Soulcalibur hasn’t done that for her. Maybe it never will. At least my own journey with Ivy Valentine has had more than enough plot twists to last a lifetime.