Pokemon Let’s Go! Eevee and Pikachu aren’t the most challenging of games, but in order to make the most of it, we have some advice. Here are a few tips for your journey to becoming Pokemon Champion.

Give yourself the ability to skip cutscenes

Do this first, since you’re going to see a lot of repeated cutscenes in this game. The ability to skip them is an option hidden in the menus. It’ll spare you from seeing your Eevee or Pikachu high five you for the umpteenth time after you beat a gym leader. Go to your menu by pressing X, then go to Options by pressing Y. Scroll down to “Movie Skipping” and then turn it on. You’ll then be able to skip cutscenes by pressing + or — on the Joy Con.

The game controls differently if you’re playing it docked on your TV or in handheld mode. If you play on your TV, you catch Pokemon by making a throwing motion with a Joy Con or Poke Ball Plus. That has some novelty, but it’s not always the easiest thing to do. To aim, you change the direction and force of where you’re making that throwing motion. It doesn’t have a lot of fidelity, and it’s very easy to throw in the wrong direction, or throw to hard and too far.

Catching in handheld mode is much, much easier. You aim by moving the actual console around, and throw by hitting a button. It’s a thousand times easier, and also more fun in my opinion. 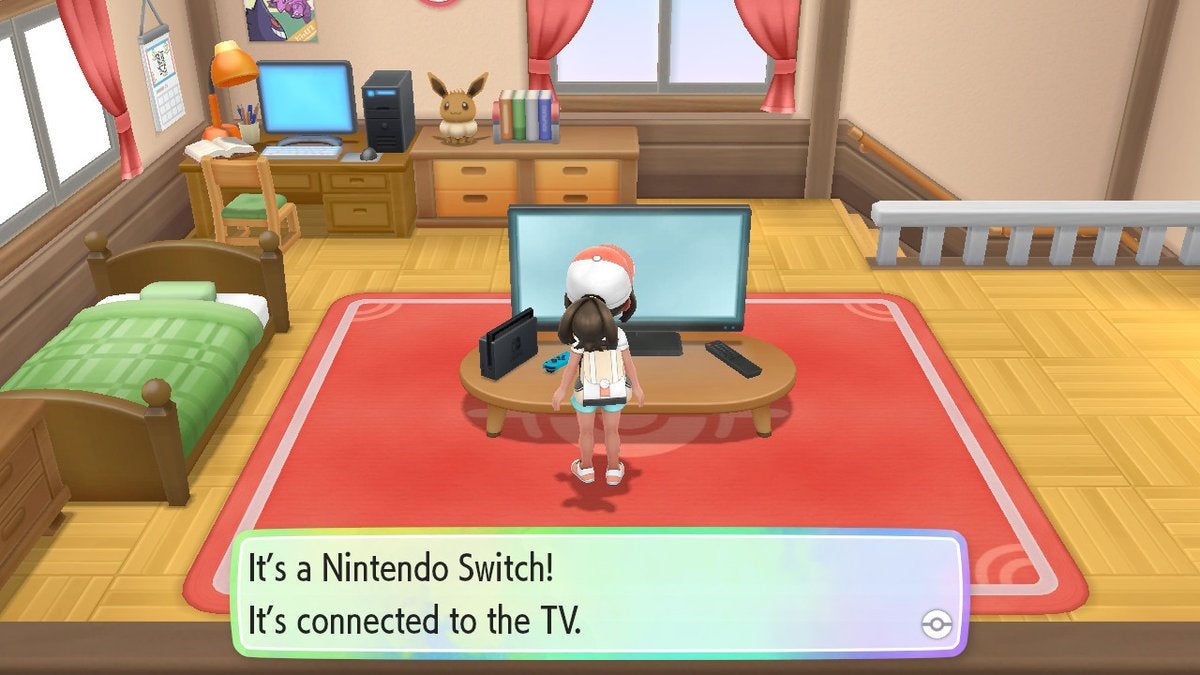 The game is all about players using motion controls, but, actually, in handheld mode, you can aim where you’re throwing your Poke Balls by using the left Joy Con’s joystick. I find it easier to aim by moving the console around, but try each one and see what works for you.

You’re never going to run low on Poke Balls. When Professor Oak deems you ready to embark to your first gym, he’ll give you 50. Whenever you defeat a trainer, they’ll usually give you three Poke Balls. You’re going to have more Poke Balls than you know what to do with — don’t waste your money on them when you could be buying potions or lures.

As soon as you can, take a Pokemon out of its Poke Ball

Your Eevee or Pikachu will always be out of its ball, but you can have an additional Pokemon follow you around as well. It might seem like overkill, but taking a Pokemon out of its ball will make it like you more, which has some benefits in battle. They’ll also sometimes find objects in the nearby surroundings, which is pretty handy.

You don’t actually have to battle everyone

You don’t earn much experience by battling, and most of the trainers in the wild only have a couple Pokemon that you’ll probably defeat in one hit. If you just want to motor to the next gym, it’s easy enough to skip most battles. You can walk behind a lot of them to avoid initiating a battle. Some rotate and you can zip past them when they’re not looking. This seems antithetical to how most Pokemon game are played, but it saves time without costing you much experience. 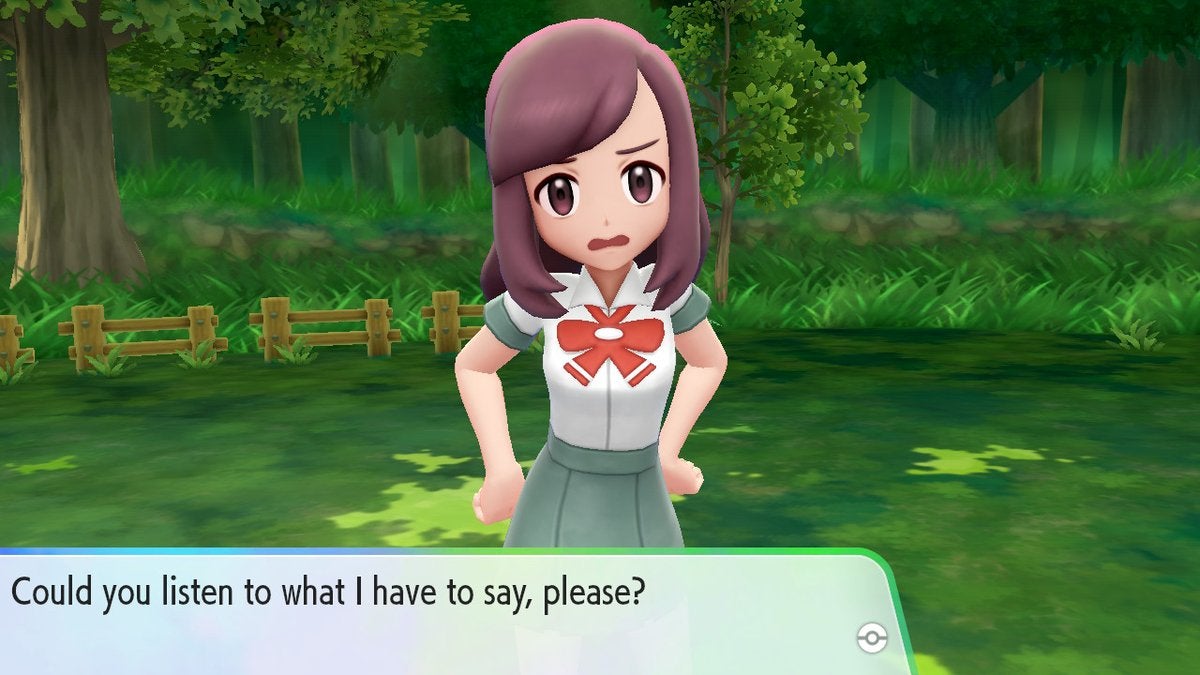 You gain experience through catching Pokemon. When you do, your entire party gains experience, and like Pokemon Go, you can boost that experience by catching multiple of the same monster in a row, catching them on the first throw, or catching a Tiny or Huge Pokemon, which are indicated by the red or blue swirls that surround them on the map.

If you want to level up your Pokemon fast, buy a lure. This will make more Pokemon spawn on the map around you, so you don’t have to just run around in the same patch of grass over and over.

After a few gyms, you’ll have the option to send the extra Pokemon in your collection box to Professor Oak. This removes them from your game permanently, but you’ll get a little treat for it. Oak will send you Candies in return for Pokemon, and you can feed those Candies to your Pokemon to raise their stats. If a particular monster’s speed stat is too low, feed it Quick Candies to make it faster, for instance.

If you send a bunch of the same Pokemon to Oak, there’s a chance you’ll also earn a Candy named after that monster, which raises all of its stats by one.

Use the Favourite system to save your best monsters

When you’re catching every monster in sight to send them off to Oak, it can be easy to lose track of the ones you actually want. I like to sort the Pokemon in my box by Combat Power — basically, ones with higher Combat Power have better overall stats than other Pokemon. You can do that by hitting Y in your Pokemon Box. You can also sort them by level, order caught, and a couple other ways.

In order to really make sure you don’t accidentally send a really good Pokemon to Professor Oak, you should favourite them. You do that by selecting the Pokemon you want to keep, then scrolling down to “Change Markings,” and then picking the first one, which is Favourite. Pokemon you’ve favourited can’t be sent to Oak, and you’ll get a warning if you select them to be sent by accident. I’ve saved a lot of useful Pokemon from being turned into Candy this way. 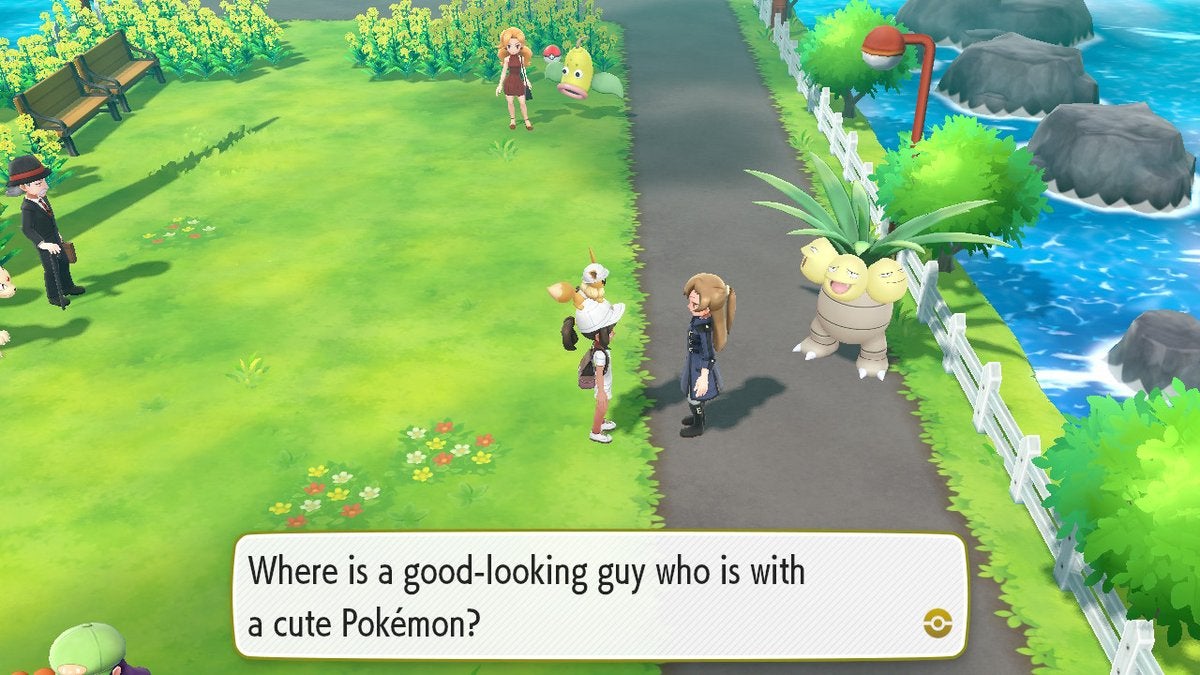 Use all your Candies

This will be weird for people who’ve only played the main games, but Pokemon Go players will probably get it. You might think just levelling up your Pokemon is the best way to make them stronger, but you really should use all your Candies as well. You won’t be able to take an absolute garbage Pokemon and turn them into a beast, but changing some specific stats can really help you against Gym Leaders.

In particular, I found that I earned way more Quick Candies than anything else, and using them to boost my monsters’ speed stats were very helpful. Whichever Pokemon has a higher speed uses their move first, and that can save you a potion if you know your next move will defeat your enemy.

Stock up before the Elite Four

Like all Pokemon games, you will have a climactic battle with the Elite Four. You have to beat them all in a row. This means you won’t be able to heal your Pokemon between battles by going to a Pokemon Center.

Because the rest of the game is so easy, it’s tempting not to visit the store before you face them. This would be wrong. Do not skip it. These battles aren’t devastating, but they’re harder than the rest of the game. The Elite Four is not afraid of using status effects, and you’ll want to be able to counter. By the end of the game you’ll be able to buy Max Potions, Revives, and Full Heals.

Have tips of your own? Share them in the comments.