The WoW Classic Demo Is The Hell We Asked For

We wanted it hard, and Blizzard is giving it to us hard. The development team has been working furiously since even before last year’s official announcement of the retro version of the MMORPG, cramming old code into a newer framework in order to undo all the streamlining and simplification they’ve done since 2005. So far, so good.

The WoW Classic demo, available for visitors to Blizzcon 2018 and those who purchased the virtual pass for the event, takes players back to 13 years ago, when Molten Core and Onyxia were the raids to beat. But demo players aren’t going on those grand adventures. 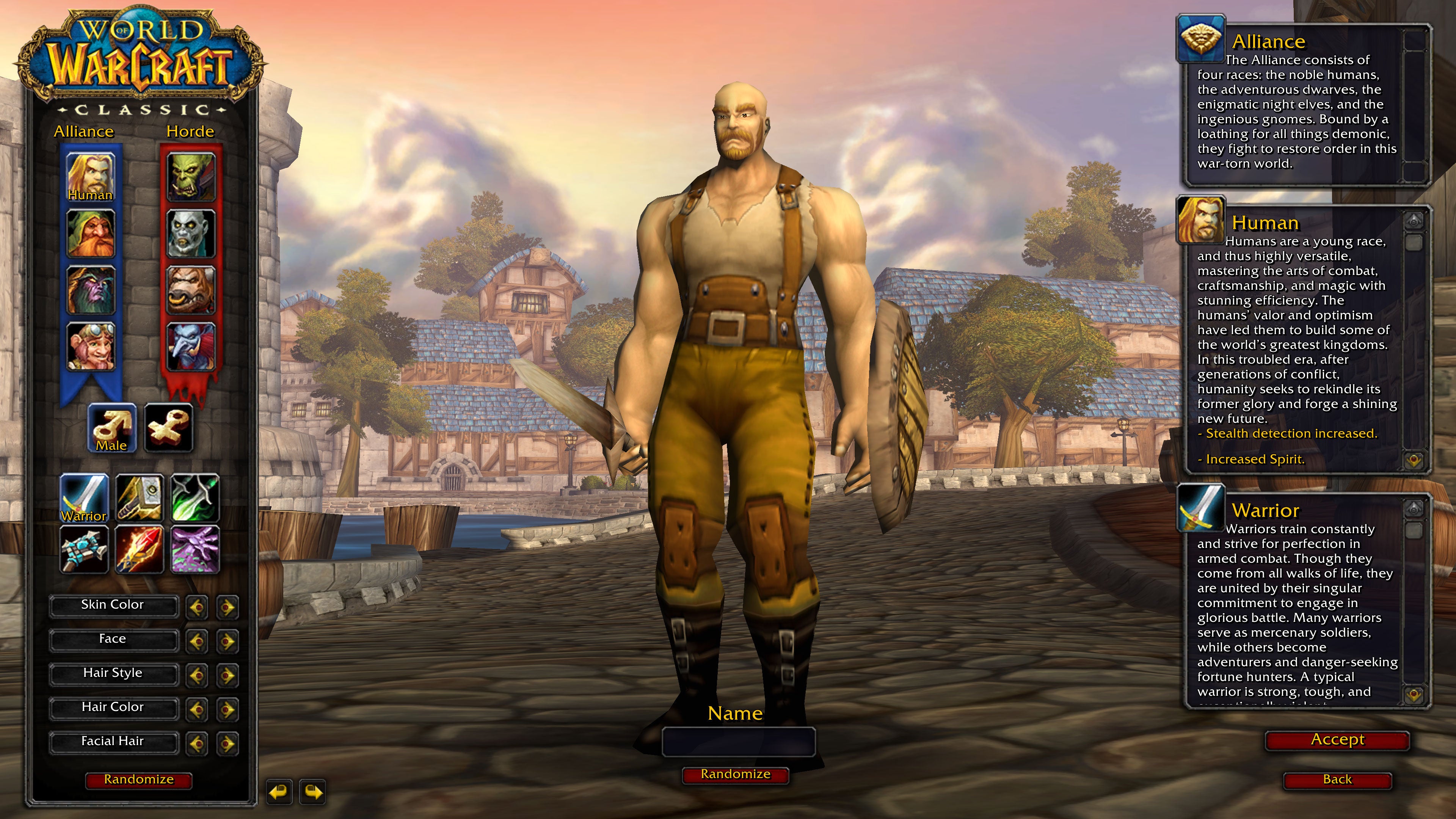 What, only four races on both sides? How am I supposed to make a Draenei Shaman?

No, the demo starts players off at level 15, with Horde and Alliance players sent to the limbo of their side’s choosing. For the Alliance, that’s the golden fields of Westfall, filled with coyotes, vultures, boars, bandits and gnolls. The mighty fortress of Sentinel Hill? Not so mighty anymore. 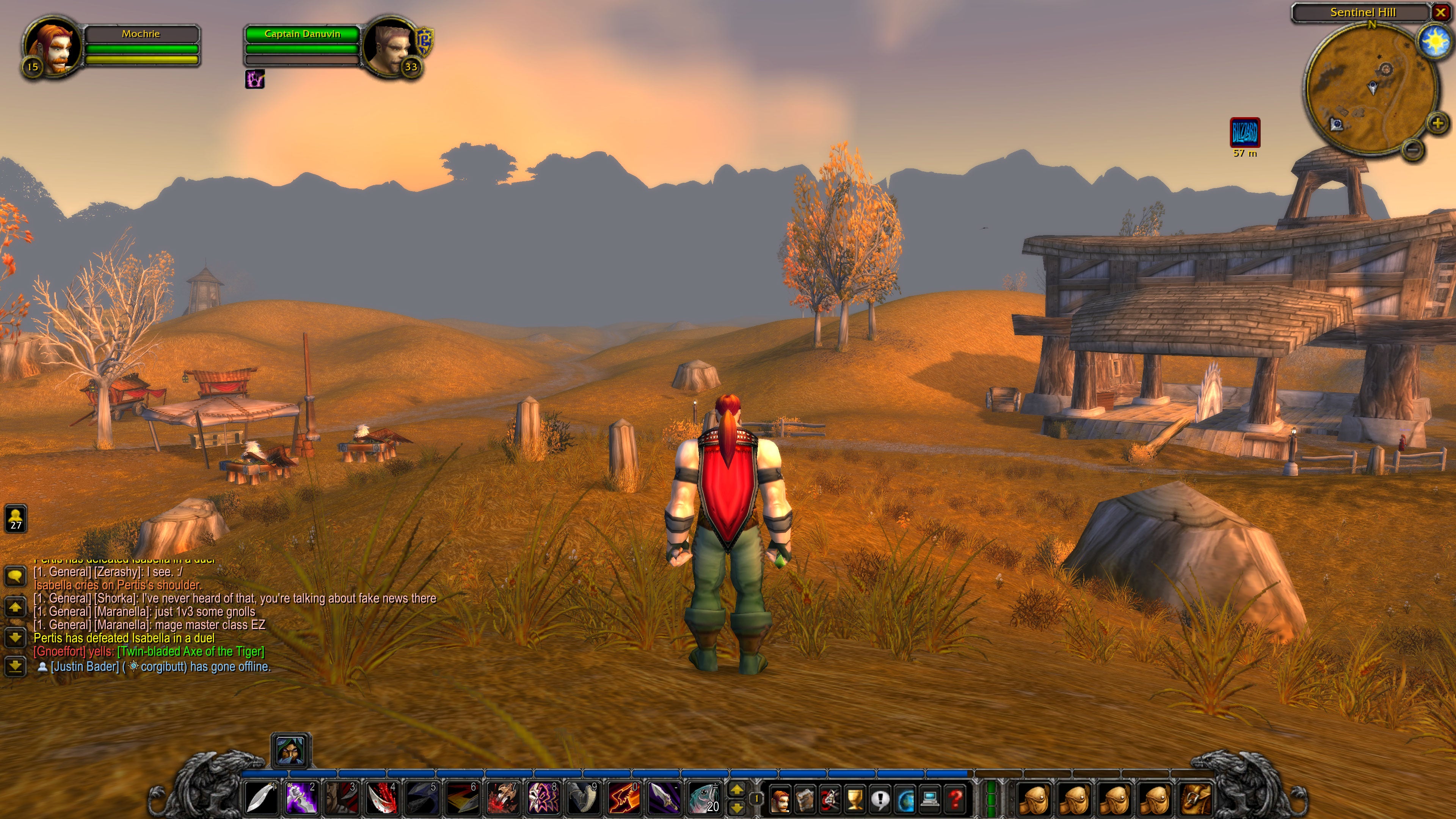 Where did the walls go? This fortress sucks.

From the starting area, players can accept quests incredibly slowly. Remember, back then the quest text used to crawl down the page before the accept button would light up. You can go into the game’s options and change it, but what about authenticity? It’s only 15 seconds out of your life every time a quest giver is clicked on. 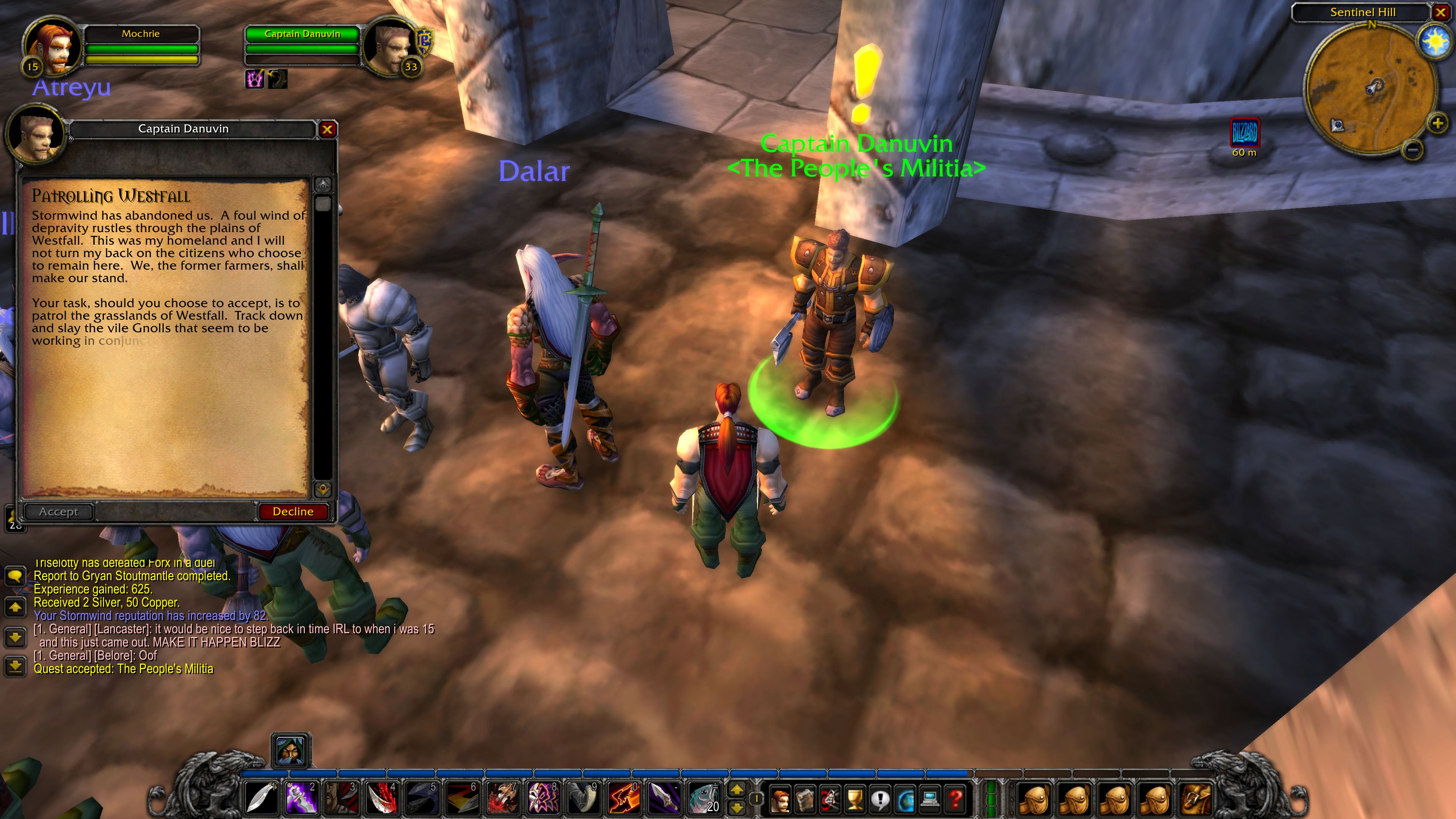 GET ON WITH IT.

Once quests are accepted, it’s off to … um. Huh. See, back then there wasn’t really a quest tracker. Players didn’t get dots or arrows on their map, showing them where their objectives were. And considering the landscape of Westfall changed significantly when the Cataclysm expansion dropped, most everybody on my beta server was just wandering about hopelessly.

It was horrible, but also beautiful. Wandering the countryside, searching for bandits, not knowing what I was going to run into—that’s the World of Warcraft that drew me in so many years ago.

And when I, only my second Alliance rogue of the demo, finally found the bandits I was supposed to kill, I felt like I had really accomplished something. 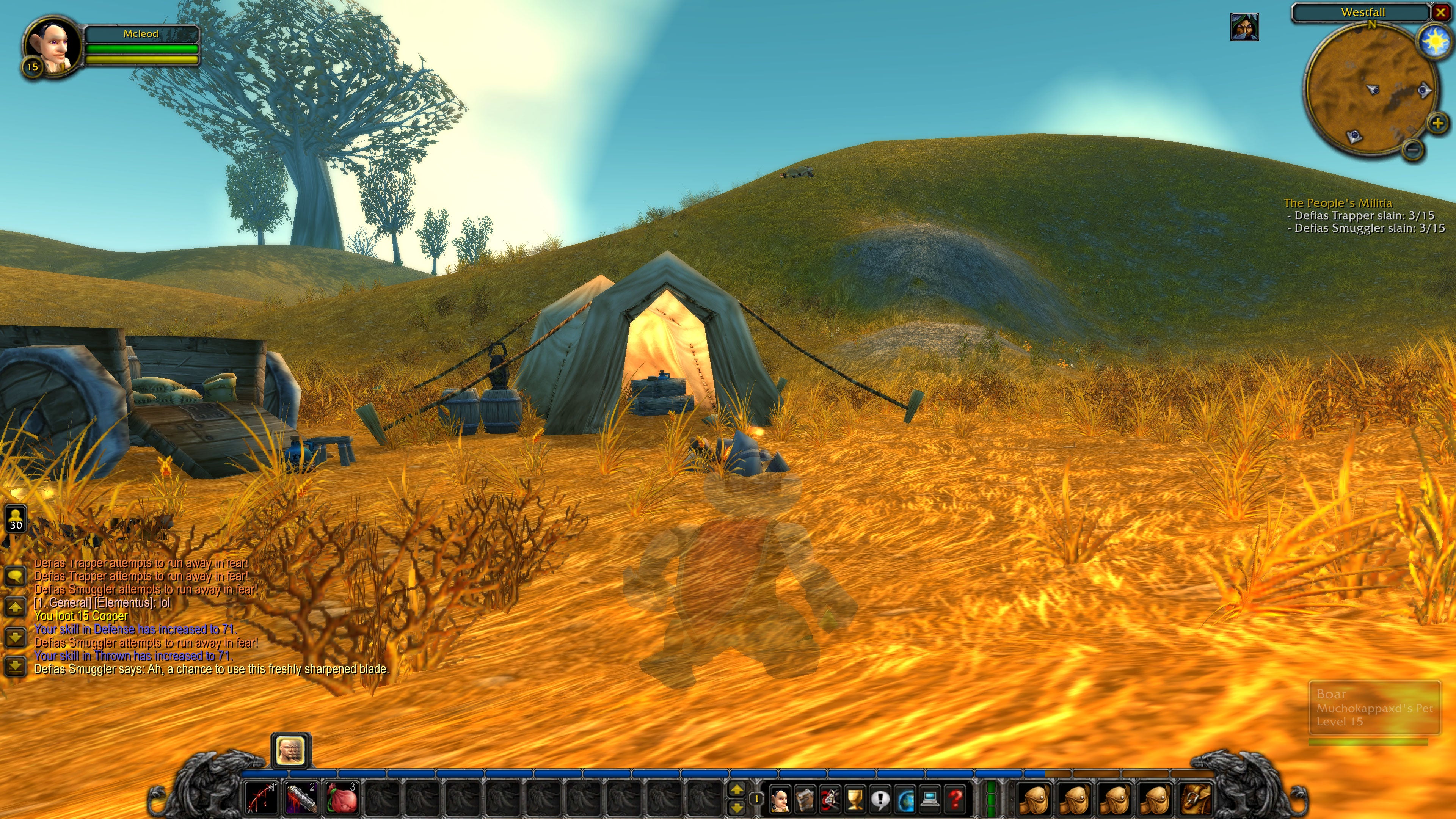 It’s so good to have Throw back.

But I didn’t spend a whole lot of time on the Alliance side. I mostly meandered about the Horde’s rolling golden plains, the Barrens. I created a mage, picked a suitable name, and set off to see if things were as bad as I remembered. 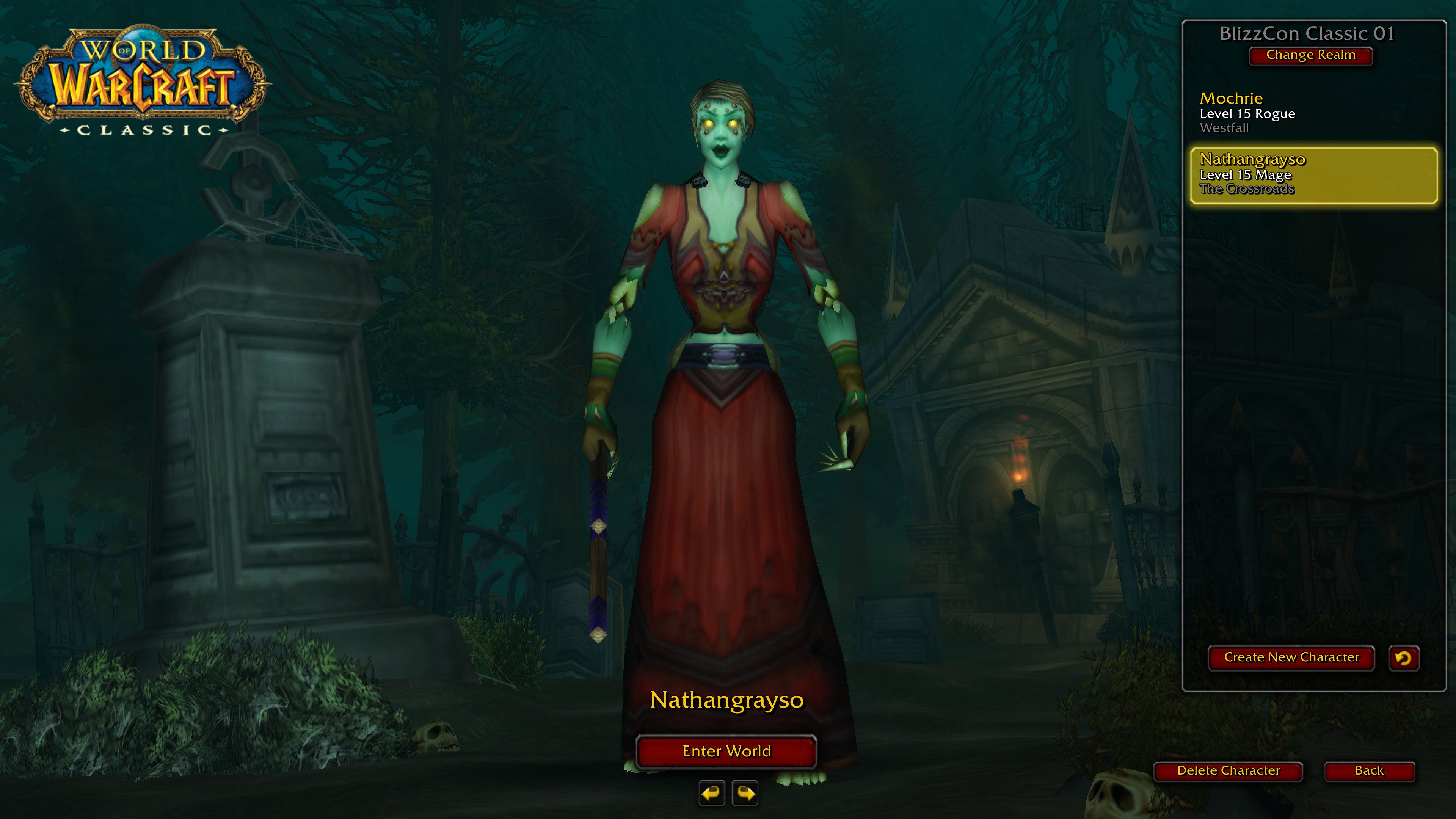 Horde players spawn at the Crossroads, and it was good to see the now-deserted area brimming with life. People were dueling, there was a dance party going on at the mailbox, and folks in area chat were going out of their way to make the seemingly never-ending level 10 through 20 hell feel like old times. Comments included:

“Anyone want to check out my livejournal?”

“Friend me on Myspace!”

“This zone is so big, it took Chuck Norris two spin kicks to cross it.”

Of course there was the requisite complaining about Blizzard. While a majority of folks in chat seemed to be loving the demo, they weren’t so keen on one of Blizzard’s other big Blizzcon announcements. 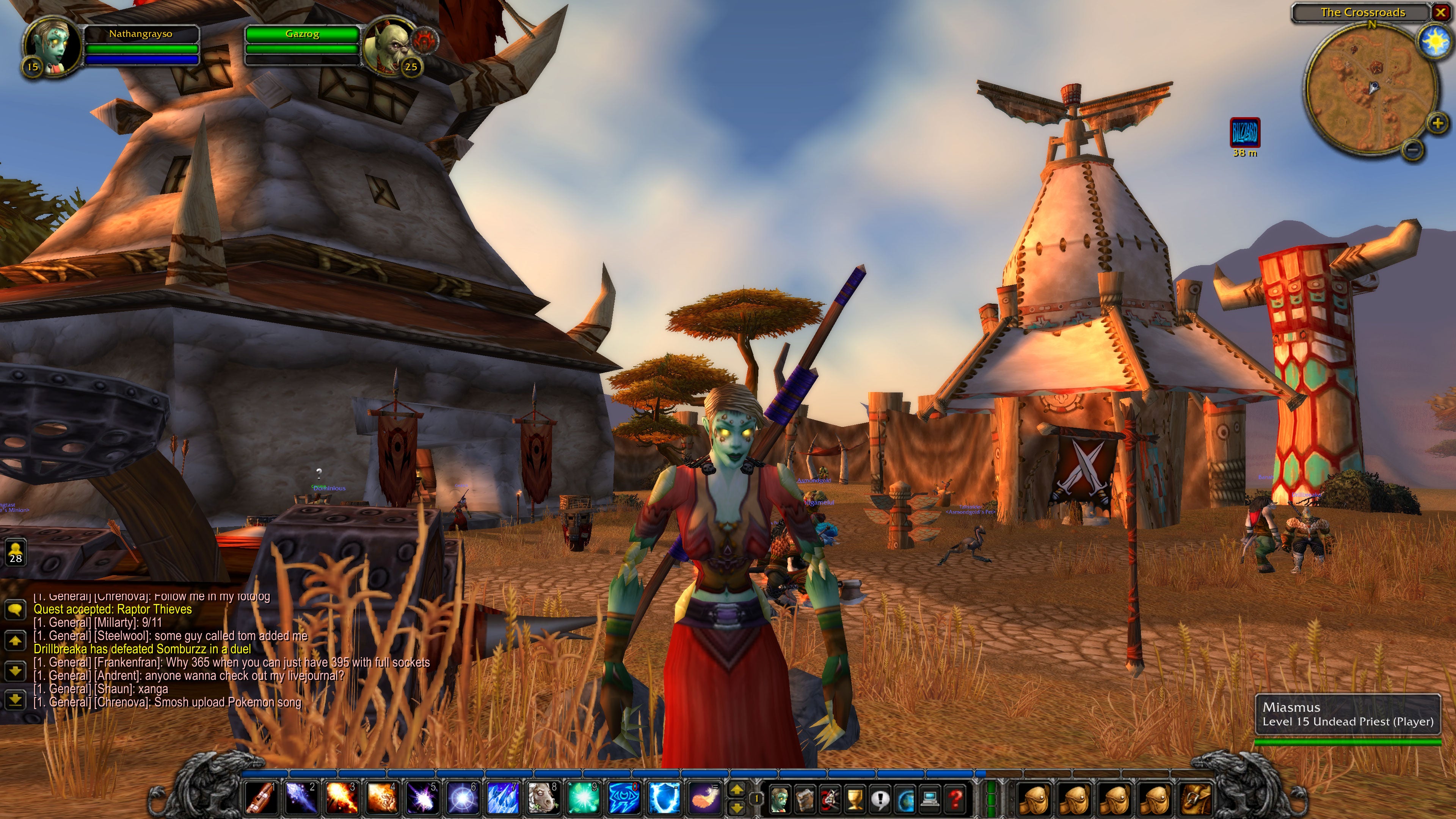 Many players expressed disappointment that the demo didn’t dial back their ages 13 years to when they were 15. Having been 31 when WoW launched, I hate those players, but I love them just the same. We were all taking a trip back in time together.

To the days when an orc named Mankirk would task Horde players with finding his wife, lost during a brutal battle with quillboars. 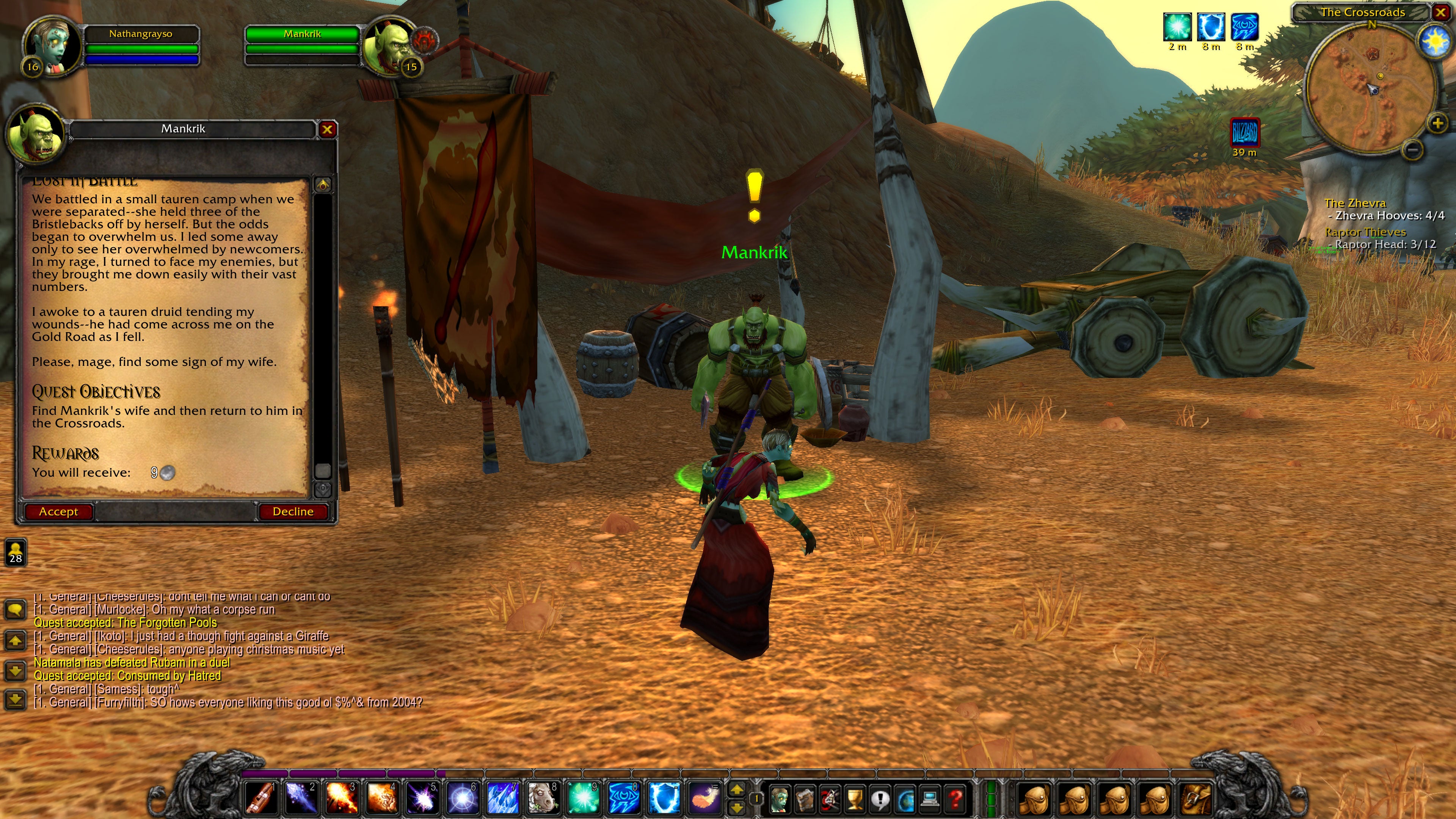 After which new players would spend an hour running about the ridiculously expansive zone, looking for any sign of “Mankrik’s Wife,” with no real indication of where to find her. 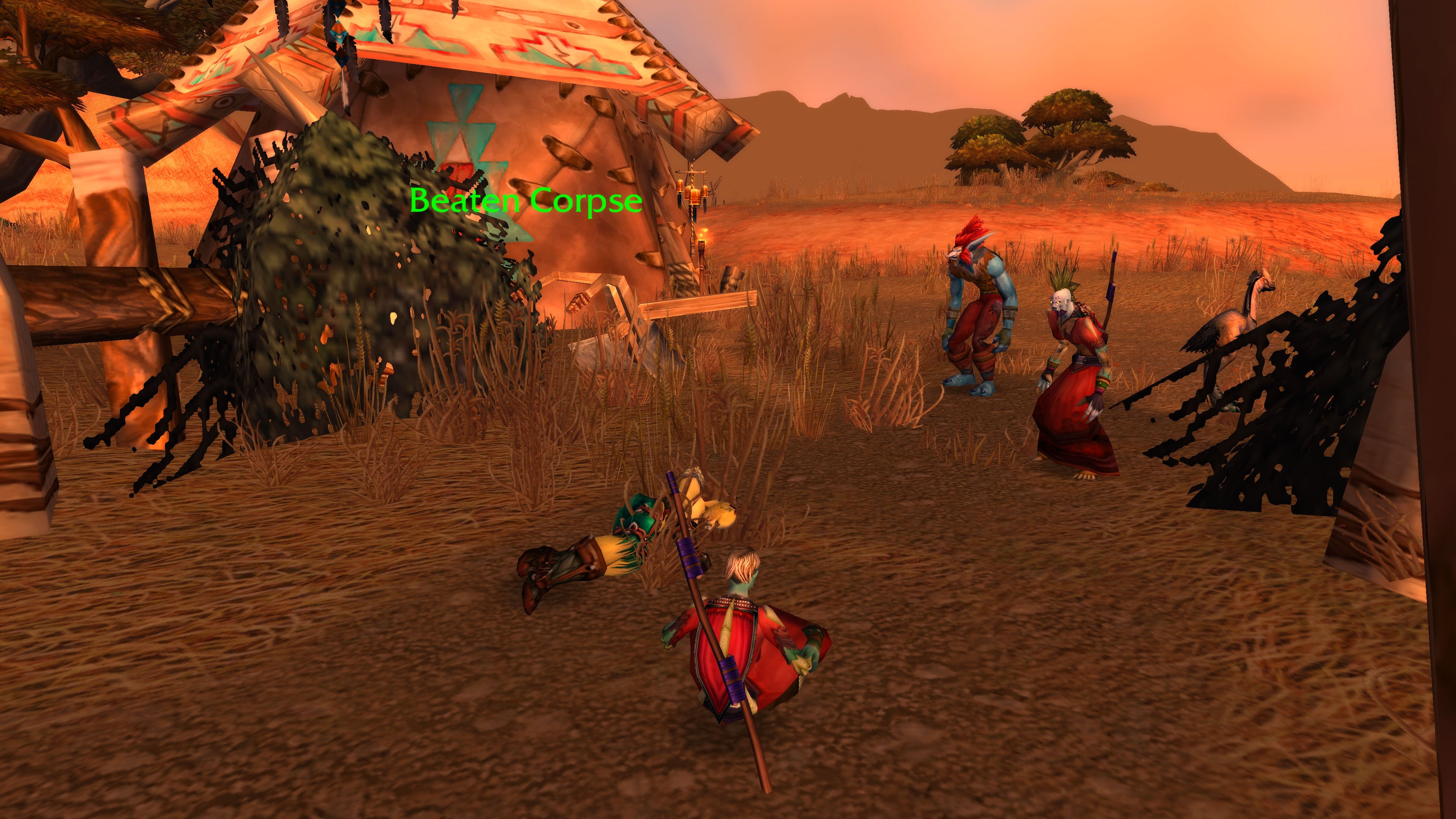 Oh wait, I found her.

To a time where our spells and abilities were tiered, and some folks would swear that some lower-tiered spells were more efficient than their upper tier counterparts. When we could buy skills from all three of our specialisations at once, and spend hours pouring over the branching talent trees to find just the right combination of enhancements. 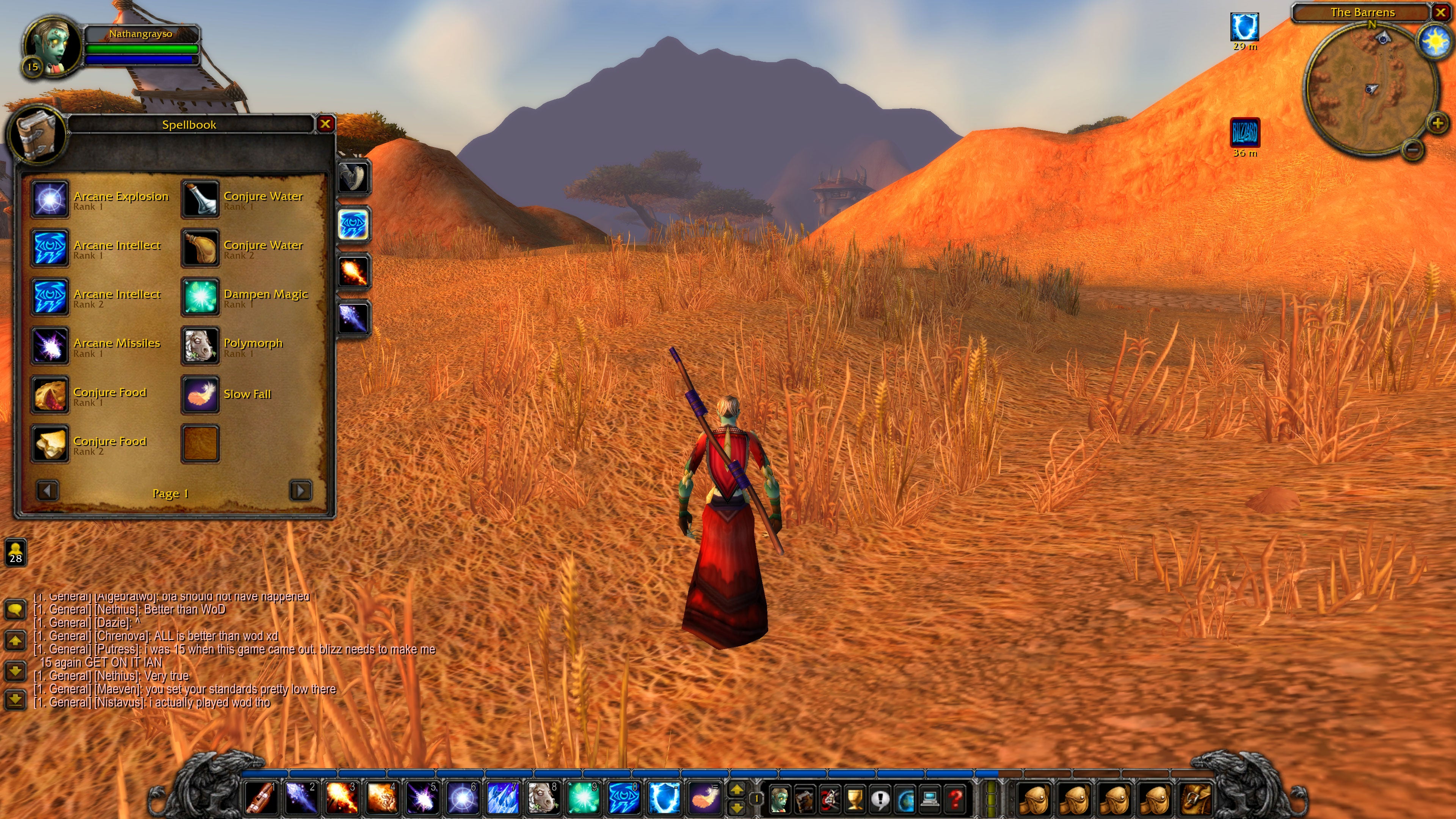 How many Arcane Intellects does one need? At least one, dammit.

And of course, to a time when animals and monsters would only sporadically have the items quest givers wanted us to gather. Things one would expect them to all have, like zhevra hooves.

Zehvras are basically horses, so one might think killing one would get an adventurer up to four hooves, but no. Not in WoW Classic.

In WoW Classic we run through the plains, battling against other players for the few striped horses roaming about. There’s no kill sharing, as there is in modern World of Warcraft. The first person to hit the creature gets to credit. Warriors charge, mages use their instants. It’s a a struggle sometimes, but a glorious one. 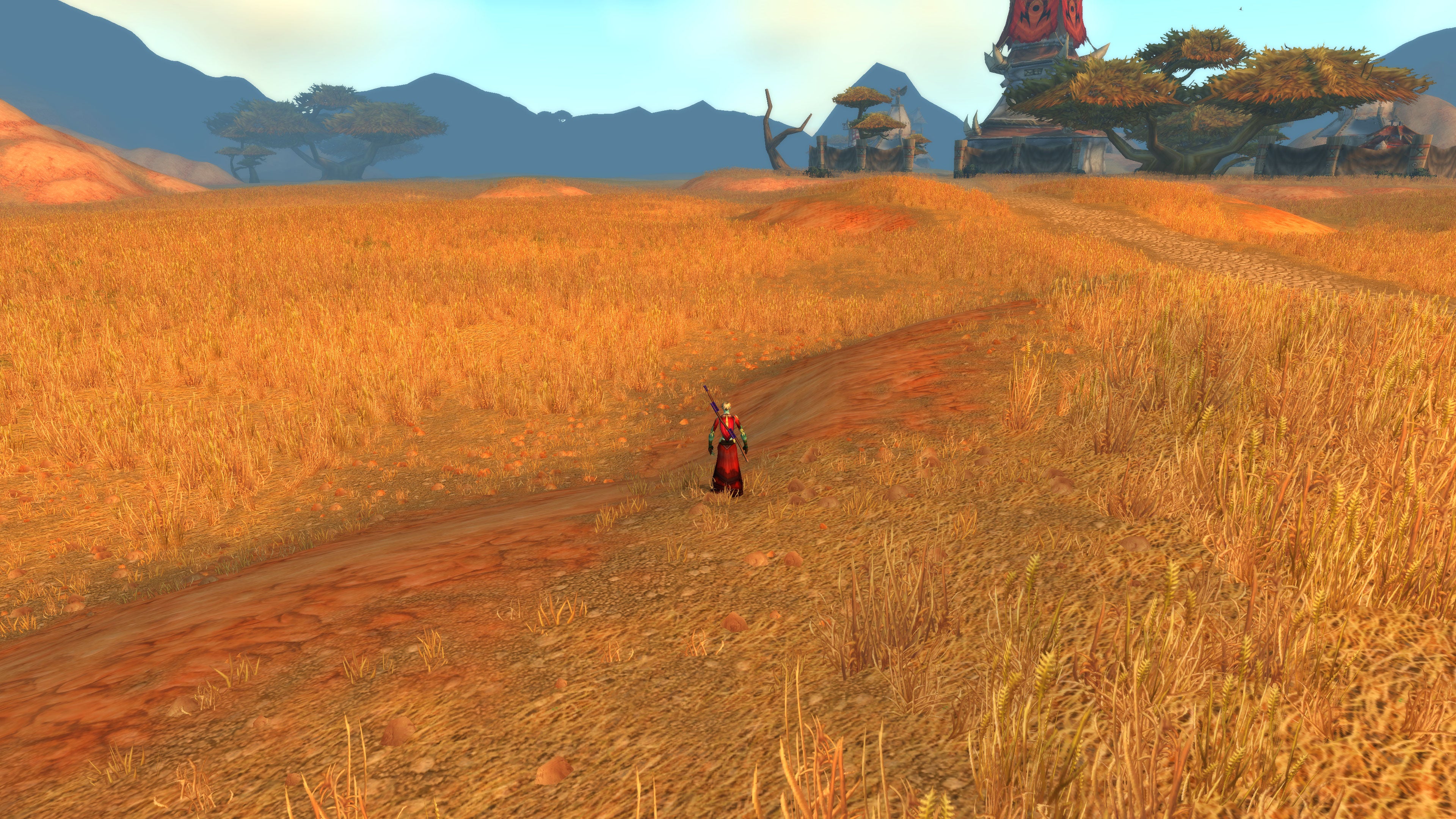 Damn The Barrens is big.

And best of all, it truly is an inescapable hell. The demo is limited to Westfall and the Barrens. Should a player attempt to cross into another zone, they are instantly teleported back to either Sentinel Hill or the Crossroards. I’ve had nightmares like that.

World of Warcraft Classic will launch officially next summer. Between this demo and the passion the developers displayed during yesterday’s “Restoring History: Creating WoW Classic” panel at Blizzcon, I’m confident that fans like myself eager to revisit the bad old days are going to be quite pleased. 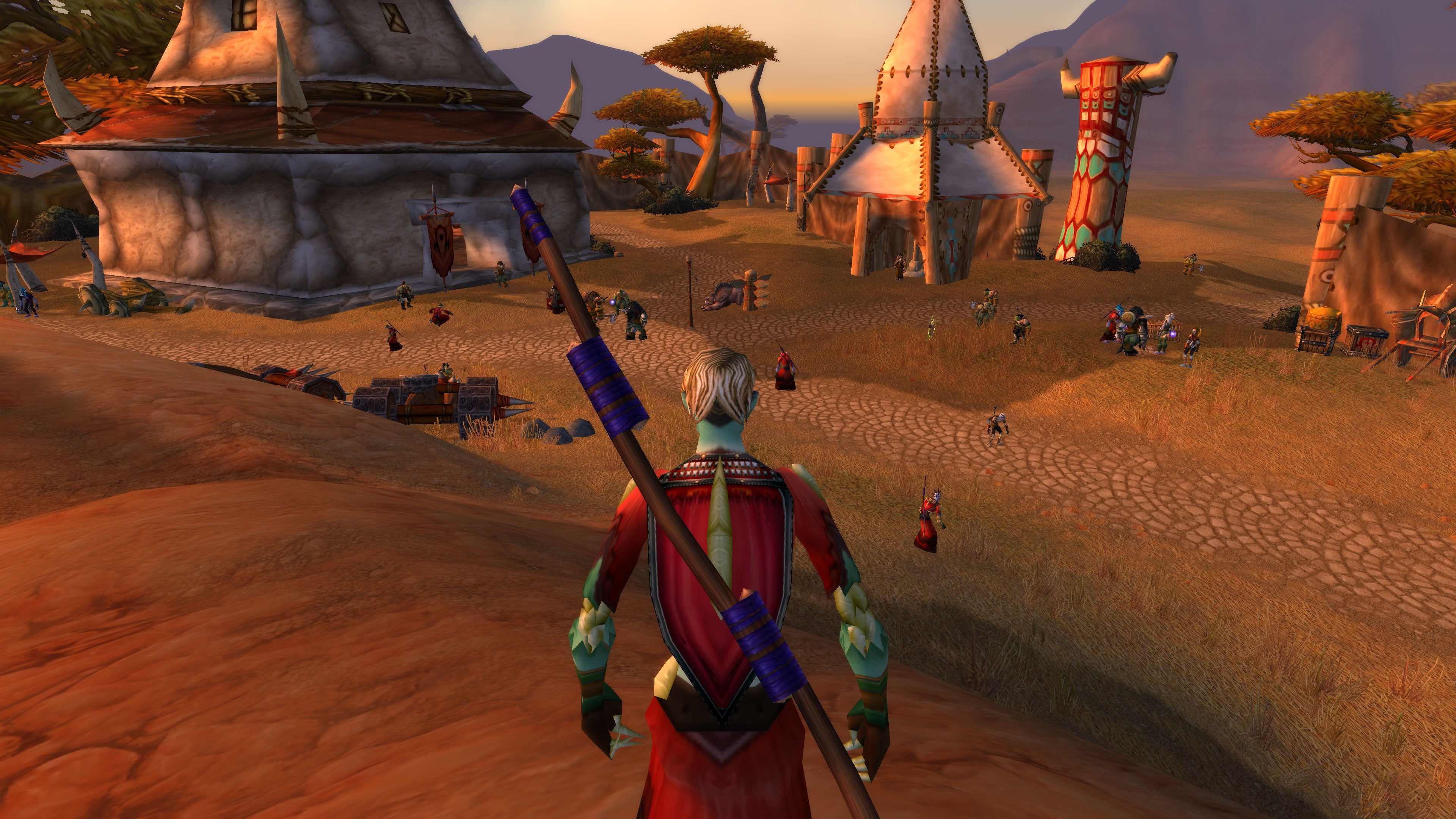