An Update On A Battlefield Trailer Quote

A quote attributed to Kotaku in a launch trailer for Battlefield V was recently removed from that trailer by publisher EA at our company’s request after a miscommunication by both parties led to the inaccurate quote’s appearance.

The launch trailer attributed to Kotaku the accolade “best of the series,” even though that phrase only appeared on Kotaku in an impressions piece about the game’s beta as follows: “I think Battlefield V’s raw gunplay is some of the best of the series, but without some tweaks, that intense Battlefield feeling I’ve come to know and love doesn’t quite shine through.”

It is common for publishers and game developers to request permission to use a quote in a trailer or other marketing materials. I keep editorial as removed from this process as possible and forward such requests to the business part of our company, which manages Kotaku and our sister sites.

In this case, those of us on the editorial side were unaware of this quote being requested for use and, when we spotted it in the trailer well after the trailer debuted, I asked our business people about it.

It turns out that a series of miscommunications on EA’s end and our company’s end led to the quote not being flagged as being out of context. Parties on both sides have talked through the protocols needed to avoid this in the future.

Our company eventually asked EA to remove the quote, and they quickly complied. 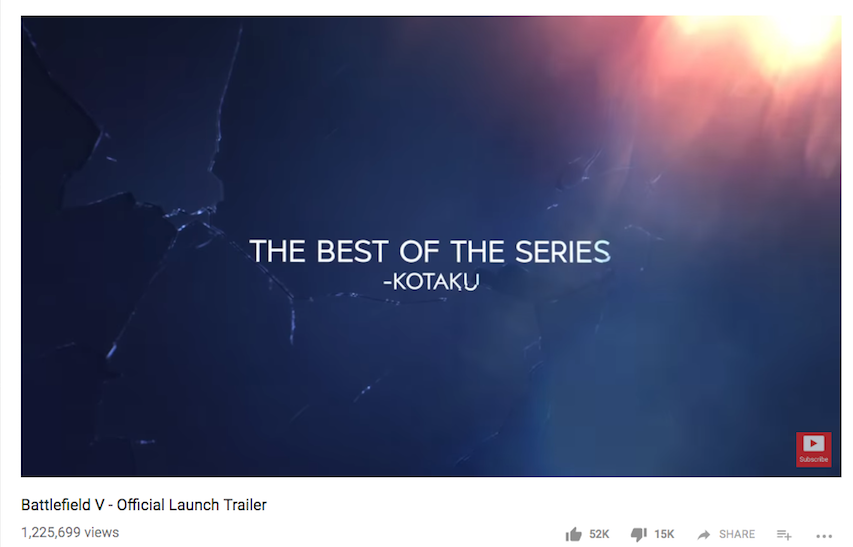 Thankfully, this has not happened before in the near-decade I’ve been at Kotaku, as best as I can recall and am aware. Any quote usage requests from EA have been reasonable in what they’ve asked to use (this “best” quote had not hit my inbox and is clearly one that just shouldn’t have been asked for).

I’ve noticed a couple of out-of-context requests from other parties in the past but they never made it through the process. To the best I can tell, whatever checks we’ve had on any misuse have otherwise been effective. With any luck, this is a one-time thing.

The idea that Kotaku called Battlefield V “the best in the series” has come up in reader feedback on our site and elsewhere online. This hopefully sets the record straight about what we said or, more accurately, what we didn’t say.