buffy the vampire slayerexclusiveio9laz marquez
To sign up for our daily newsletter covering the latest news, features and reviews, head HERE. For a running feed of all our stories, follow us on Twitter HERE. Or you can bookmark the Kotaku Australia homepage to visit whenever you need a news fix.

The lushly detailed work of pop-culture artist Laz Marquez is familiar to many genre fans—he’s done stunning box art for Scream Factory, and covetable, collectible posters for some of our favourite horror movies. His latest project highlights the ultimate cult TV show: Buffy the Vampire Slayer.

Similar to a series he did illustrating individual episodes of Star Trek: Discovery (check ’em all out here), Marquez is now tackling an even bigger project, creating a poster for every single Buffy episode.

You can see what he’s done so far on his Twitter, and we’ll share a few below, along with a short interview we conducted with the artist over email. And, we’re thrilled to exclusively debut his latest entry in the series, “Prophecy Girl,” in honour of Buffy’s first-season finale—check it out up top!

What made you decide to do an episodic poster series about Buffy the Vampire Slayer, and how long do you anticipate it taking?

Laz Marquez: I’ve been a huge Buffy the Vampire Slayer fan for quite some time, originally having seen the premier episode back in 1997! I’ve been a big advocate for the show and its themes from day one, and here we are over 20 years later. In between commissioned projects, I like to keep myself challenged and learning. This usually comes in the form of creating art for properties I love.

Buffy has been a show I’ve wanted to tackle for years and honestly, I was a bit nervous to take the show on. I find that when I feel so connected to the source material, it’s easy to be overly critical about the artistic process. A few months ago, against those fears, I decided that the best way to do the show justice was to create poster art for the show episode by episode. It allowed me more freedom to express the narratives and characters over a longer period of time.

The magic of Buffy was seeing these longer arcs come to life and see these characters grow over the seasons, so it felt like the right fit!

Given that, this will be a long initiative for me and will last for years to come. I plan on doing every episode of every season, chronologically each week (with the occasional break in between). 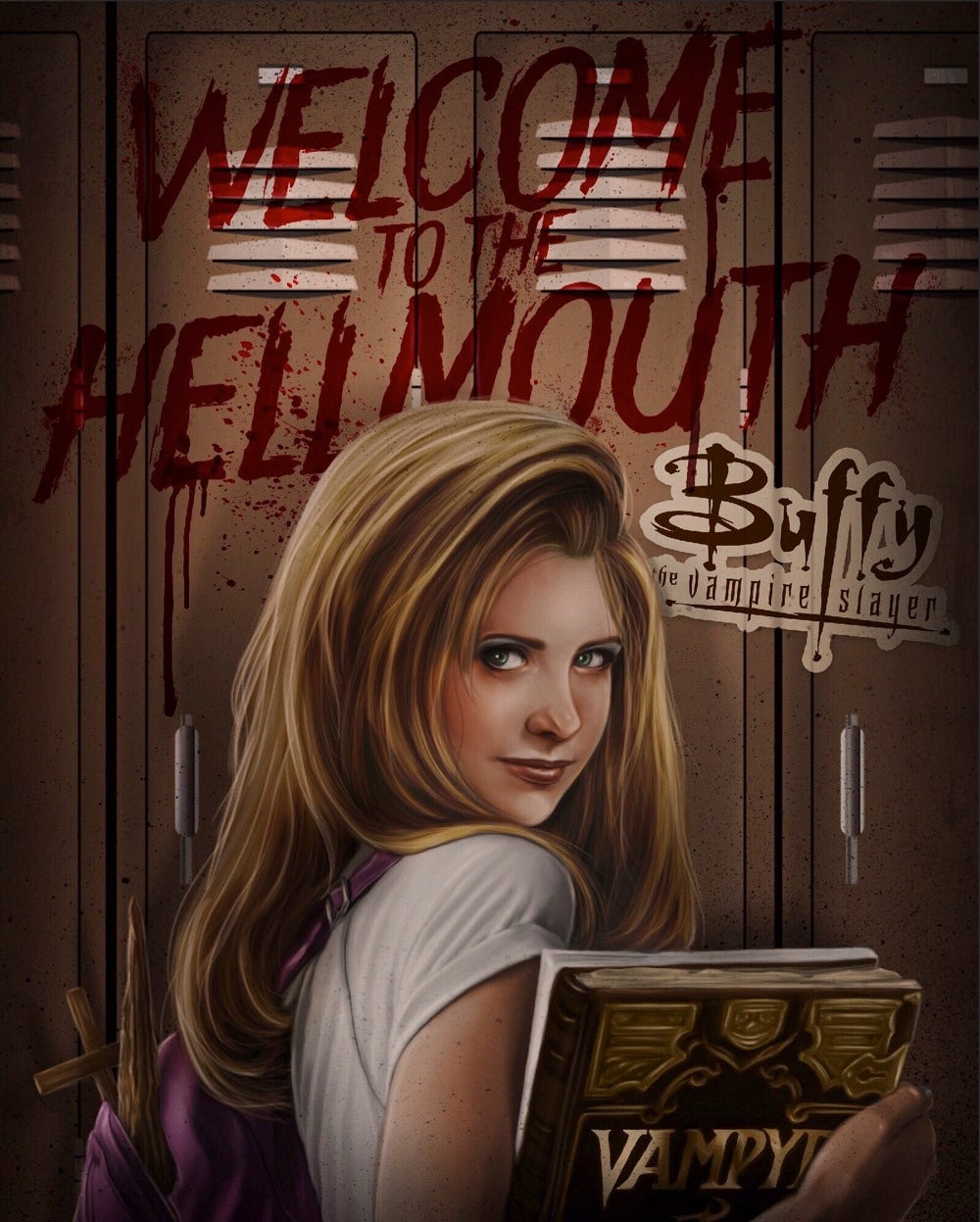 “Welcome to the Hellmouth” was the very first Buffy episode; it aired March 10, 1997. (Image: Laz Alvarez)

What do you love about Buffy the Vampire Slayer?

Marquez: As I mentioned, I’ve been a fan of the show since it first aired and I found myself growing along with it. These characters became a sort of surrogate family each week growing up as a tragically nerdy kid, and it truly taught me some life lessons I carry with me to this day. One of the things that always struck me to be so special about the show is its ability to use horror as a metaphor for these huge milestones in life.

Although the circumstances were so unreal, I still found myself connecting so deeply with all of these characters and their journeys. In addition, growing up, I always found myself relating more so to the female heroines in films. From Nancy Thompson (A Nightmare on Elm Street) to Ellen Ripley (Alien), these became the true heroes I aspired to be. When Buffy first debuted, there weren’t many shows that truly captured this kind of hero before and allowed us to see her grow into the role.

I immediately connected to her story and am so thankful that this show still inspires so many humans to find the strength to stand up for what they believe in and also be so very emotionally human.

Marquez: Wow, this is one of the toughest questions I’ve had to answer in a long while! I think outside of the popular picks (“Becoming” parts one and two, “Hush,” “Once More With Feeling”), a couple of my favourites would be season two’s “Passion” and season six’s “Normal Again.” I love how emotional those episodes are and I’m a sucker for the show’s ability to surprise me and rip my heart out. 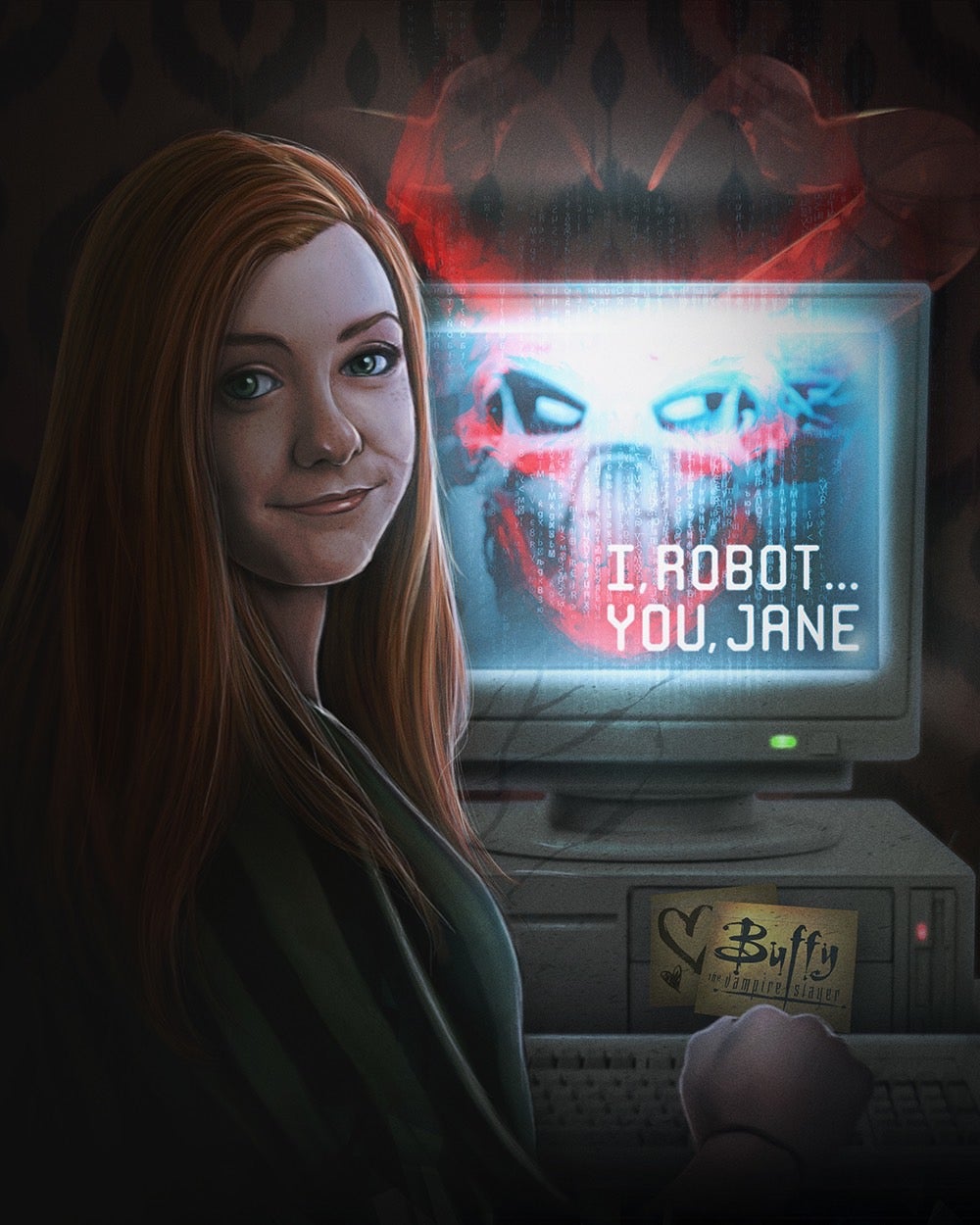 Willow gets the spotlight in “I, Robot... You, Jane,” season one’s eighth episode. (Image: Laz Marquez)

You do a lot of poster art about episodic television. What is it about TV episodes that makes you feel their stories should be told through artwork?

Marquez: Through my professional work, I typically take on a lot of film focused artwork. It’s something I love because of the challenge involved in encapsulating a full story with one image. With my personal side projects, I recently started to explore episodic television and challenge myself in new ways.

I started this in a big way last year by creating episode posters for Star Trek: Discovery. What I learned through that experience was that I was able to visually explore different styles and concepts per episode without feeling the need to cram every element or character in the composition.

I fall in love with TV shows primarily based on characters, so by creating a poster for each episode, I can capture a character’s emotional state in that moment versus trying to generalise the theme of a full story. These characters will grow next week and have new adventures, so I get to revisit them artistically, which is super exciting! The timing of releasing these weekly is also an interesting challenge because I don’t afford myself to over-analyse the details and really work on instinct.

What poster are you most looking forward to making with the Buffy series?

Marquez: Hands down, I’d say ALL OF SEASON TWO! As I’ve worked on these, my friends who know what a huge Buffy fan I am, keep messaging me saying “You must be SO excited to finally get to season two.” They are so right in so many ways. Season two has such interesting themes and arcs and goes to some dark places. Being a big horror fan and having worked on a lot of horror in my career, I love the darker episodes. So suffice it to say, I’m thrilled to get to some of that in the artwork.

My very broad answer aside, I’m super excited to tackle “Hush,” “Once More With Feeling,” the tail end of season six and anything featuring Faith!

What other work or projects are you involved in currently?

Marquez: These days, I work frequently with the fine folks at Shout Factory and Scream Factory creating cover artwork for their Blu-ray and Collector’s Edition releases of some amazing horror films. Over the past year, I’ve worked with them on over a dozen titles and look forward to more in the future. In addition, I work frequently with the LA-based Gallery 1988. They’re a pop culture gallery that holds some amazing group shows based on some incredible TV/film properties and themes. Keep an eye out on my website for upcoming announcements!

Lastly, I just wrapped some work recently with the J.J. Abrams produced film Overlord and will be back to do episode artwork for Star Trek: Discovery in January! 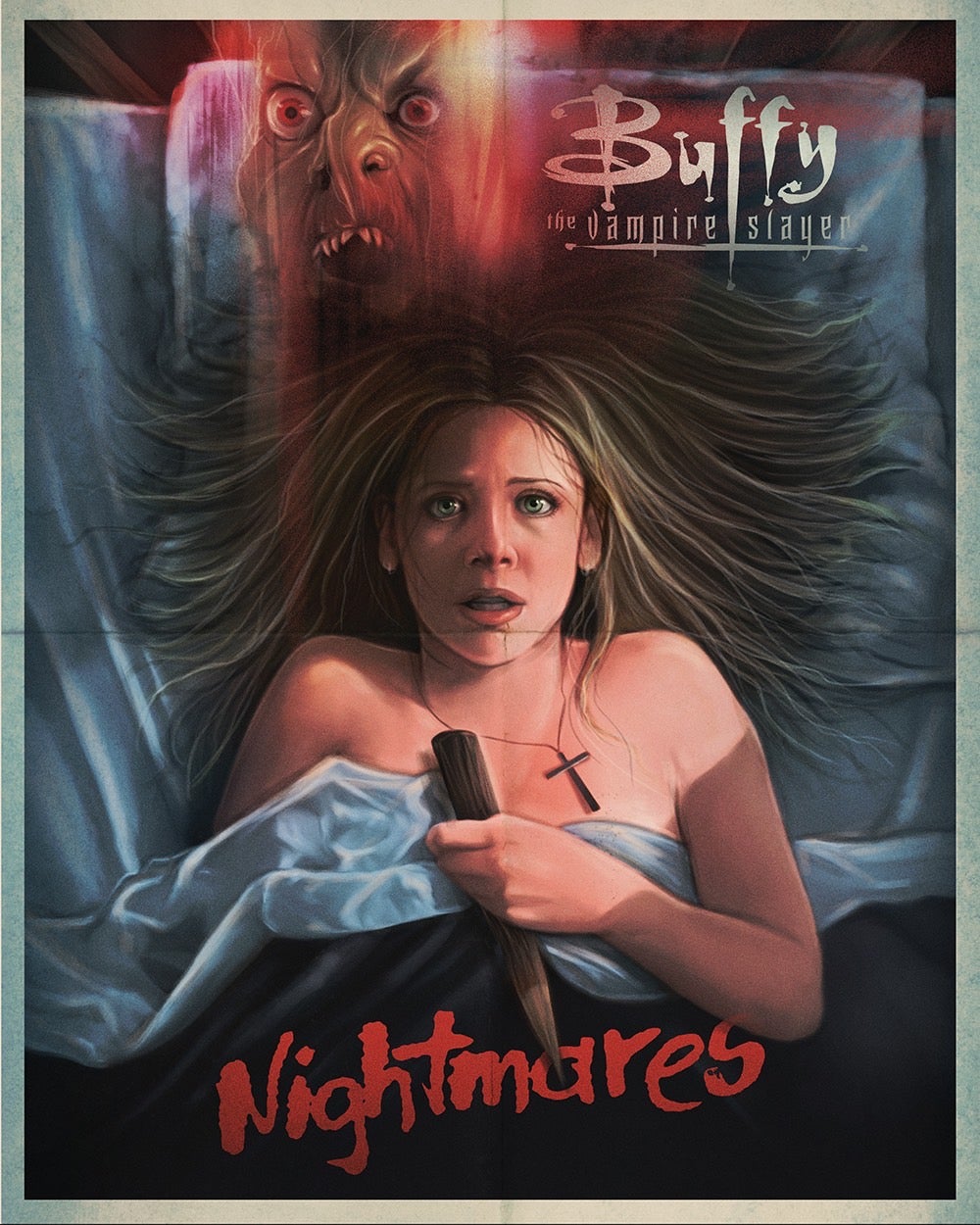 A killer Nightmare on Elm Street homage for “Nightmares,” the 10th episode of the first season. (Image: Laz Marquez)

Keep up with Marquez’s Buffy series by following him on Twitter, and check out his website here.