Hitman 2’s first elusive target left the game this week. These special targets, which players only have one attempt to assassinate, ramp up the tension and challenge players to perform perfectly. The first target also showcased some of Hitman’s best qualities. The scenario was funny, self-aware, and bloody as heck.

The first target was Mark Faba, an ex-special agent turned professional problem solver. Fittingly, he was portrayed by veteran actor Sean Bean. Bean is known for his sneaky turn as James Bond’s nemesis in 1995’s Goldeneye as well as prominent fantasy characters like Game of Thrones’ honourable Eddard Stark and Lord of the Rings’ noble but fallible Boromir.

Many of his characters suffer gruesome or unfortunate deaths. In a nod to this, Faba is also called “the Undying” and has a fictional reputation for surviving numerous assassination attempts. It’s a funny framework for an elusive target that Hitman 2 takes full advantage of.

Players are dropped into the game’s first major level, Miami, and given freedom to deal with Faba however they like. If they die during the mission, they don’t get a second chance. That’s it. Either you win or you don’t. Elusive targets were a staple in 2016’s Hitman and, in combination with the game’s escalation missions, really pushed players to test their knowledge of a given level.

Miami’s mission mostly takes place in the Kronstadt building, a maze of maintenance closets, conference rooms, test labs, and private offices. It’s a complicated vertical puzzle-box. Exploring it in the context of a hardcore challenge is already fantastic, but what really made this elusive target work was how much it was willing to poke fun at itself. 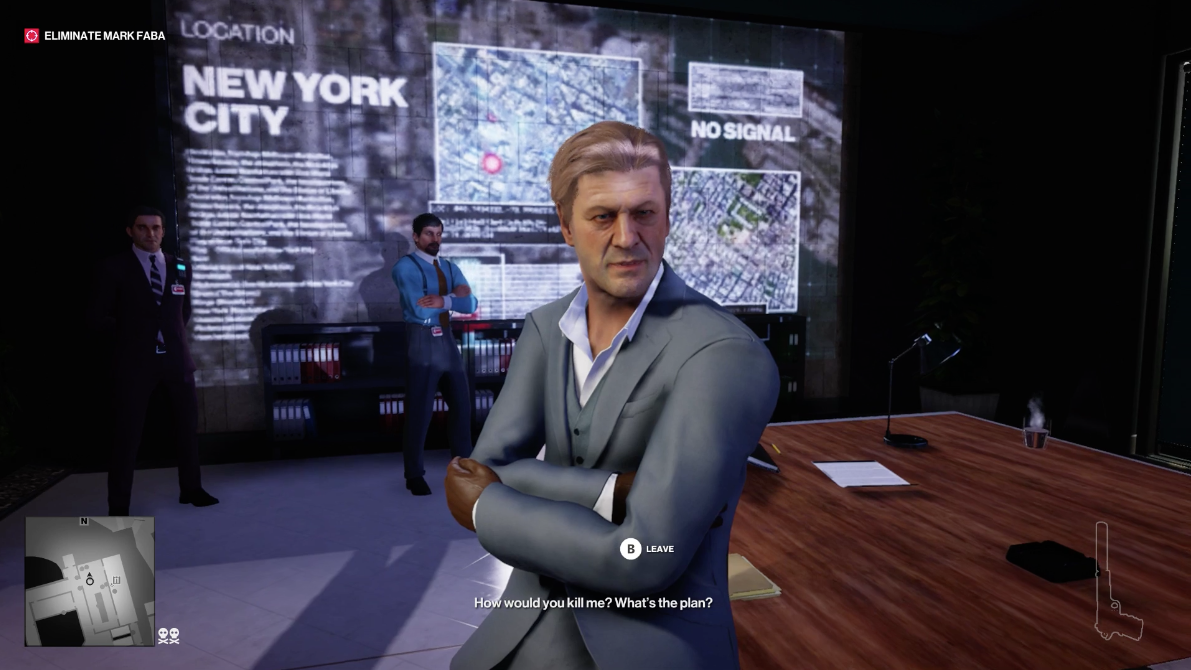 If you follow one of the game’s “mission stories,” which guides player through specific assassination approaches, it’s possible to end up in a meeting with Faba. He is going over the logistics of his next assassination and walks up to the player, who is seated in a conference room chair. The rest of the scene is in first person, with Bean (as Faba) speaking directly to the camera and the player.

“How would you kill me? What’s the plan?” The player can then look around the room to outline different strategies—poisoning his coffee, throwing a pair of scissors at him, pushing him off the nearby balcony.

In a nod to how often Bean’s character dies on screen, Faba playfully dismisses all of these options. He’s survived worse.

This moment is also a miniature celebration of Hitman. Hitman is a game where you can ostensibly walk into any room and find countless ways to dispatch a target. The reality is often more limited, but the promise is intoxicating. You are the most important person in any room and almost the most nondescript and outgunned. It’s a chaotic and capricious world, but you can prevail if you have enough ingenuity.

You can, as I did, find a dossier on Faba and scan his face into the targeting data of a military robot. You can sabotage some of his equipment to explode when he examines it. If you’re feeling bold, you can even slam his face into the tip of a pen.

It’s bloody stuff, but Hitman’s violence has always edged the line between vicious exhibitionism and pulp humour. That quality was on full display in the inherent absurdity of Bean’s self-aware character mixing well with Hitman’s playful excess.

I streamed the elusive target on my personal Twitch channel. Hitman games are perfect for streaming, and the added tension of having one shot at success brought a tension that can’t be found watching a round of Battlefield or Smash Bros. Hitman has a communal aspect built into it.

It’s something you watch with anticipation, waiting to see either glorious success of monumental failure. You can speculate with other viewers about what will happen next and discuss the best plan of attack. I’ve never seen my viewers quite as curious as when they tried to figure out exactly how I could pull off this daring assassination.

Hitman is a game about making mistakes and dealing with them. Elusive targets ask for perfection, pushing players to really engage with the space around them or else miss out on prestige and rewards. Hitman 2’s first elusive target injected comedy and self-awareness alongside all of the tension.

It was a celebration of that powerful Hitman promise: sneak in, improvise, execute. And no matter if they succeeded or failed, everyone who made the attempt walked away with their own amazing story.