How To Upgrade Your Nintendo Switch To Be Better At Super Smash Bros. 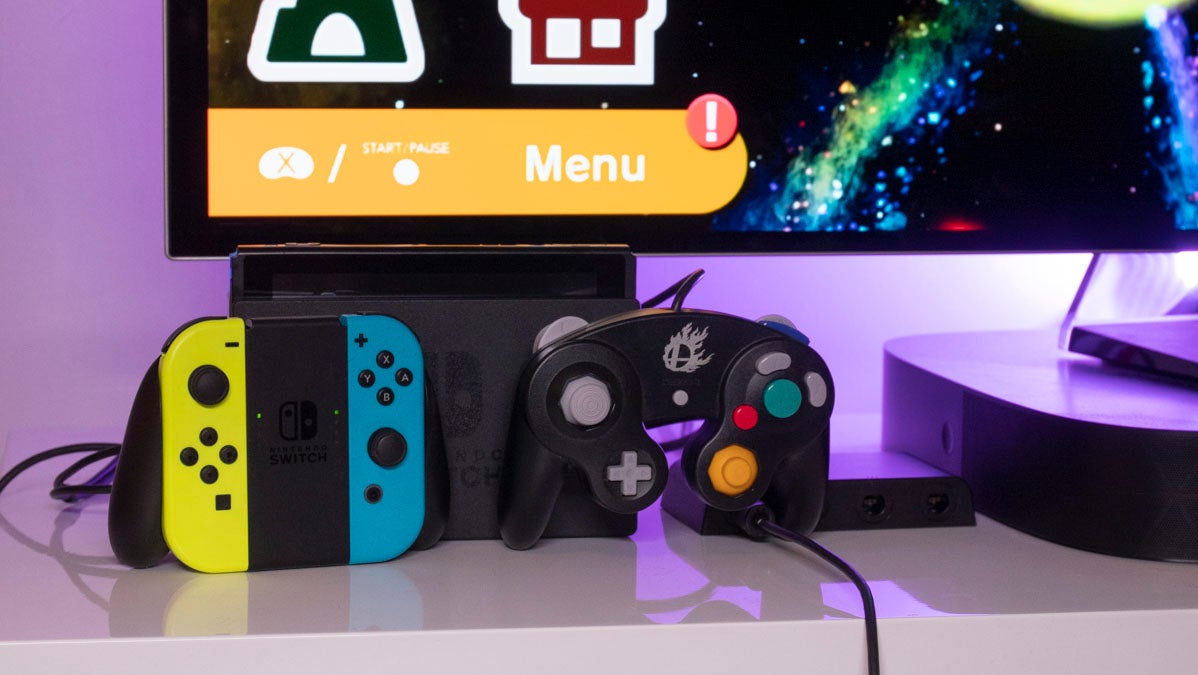 Photo: Alex Cranz, Gizmodo
To sign up for our daily newsletter covering the latest news, features and reviews, head HERE. For a running feed of all our stories, follow us on Twitter HERE. Or you can bookmark the Kotaku Australia homepage to visit whenever you need a news fix.

I am bad at Super Smash Bros. Maybe you are too! We could listen to our betters, who claim the only tact for improving is to “get gud,” or we could employ the time-honored tradition of modifying our hardware to make our gaming a little less shitty. This isn’t me encouraging you to apply some shady mod that lets you cheat though. These are tips for upgrading you Switch through with dongles, controllers, and display devices.

The Switch does not come standard with an Ethernet port so you might assume that the only way to access the internet and play your friends is via wifi. But in a game where crucial plays can be ruined by a few milliseconds of bad timing, wifi is not your friend. Wifi can be prone to hiccups, which lead to lag. Wifi on the Switch, in particular, is also pretty dang slow, which makes downloading updates or new games an hours-long slog.

Ethernet is much faster, and when you plug your Switch into its dock, you’ll notice that there are three USB-A ports on the device, any of which can accept Nintendo’s $US40 ($57) Ethernet adaptor. Just plug in, restart, and you’re good to go. 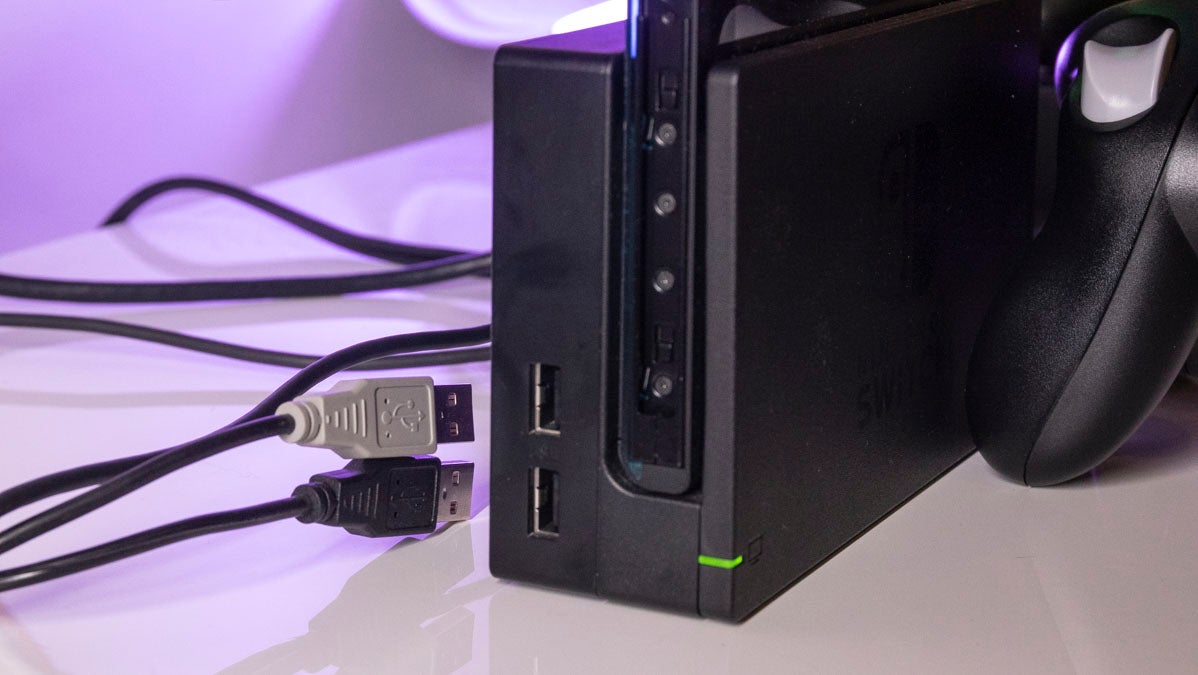 There are two USB ports on the side and one under the cover between the power and HDMI ports. (Photo: Alex Cranz, Gizmodo)

But if you’re cheap, or a gadget blogger who seems to have USB Ethernet adapters lying all over the house, there’s great news: Most third-party Ethernet adapters should work as well. I say most because I haven’t tested every single one out there, but you can find them for as little as $US12 ($17) online, and you might be in luck and have one or two already lying around that you can test yourself. So there’s no harm with experimenting before investing in Nintendo’s official adaptor.

Get a better controller

The Joy-Con controllers are tiny marvels of engineering, but the joysticks can feel inaccurate when you’re trying to pull off a quick uppercut and instead find yourself yeeting off the map.

Fortunately, there a few options available that will improve your performance. First, you can pick up the Switch Pro Controller for $89. From ergonomics to joystick manipulation, everything about the Pro is an upgrade from the Joy-Cons.

If you’ve primarily played Smash previously on a GameCube controller, you can also pick up the new wireless Gamecube style controller made by PowerA for as little as $49. These controllers are built for the Switch, which means that have all the buttons necessary to play other Switch games as well, and they even have a Home button in case you need to hop into the main menu. 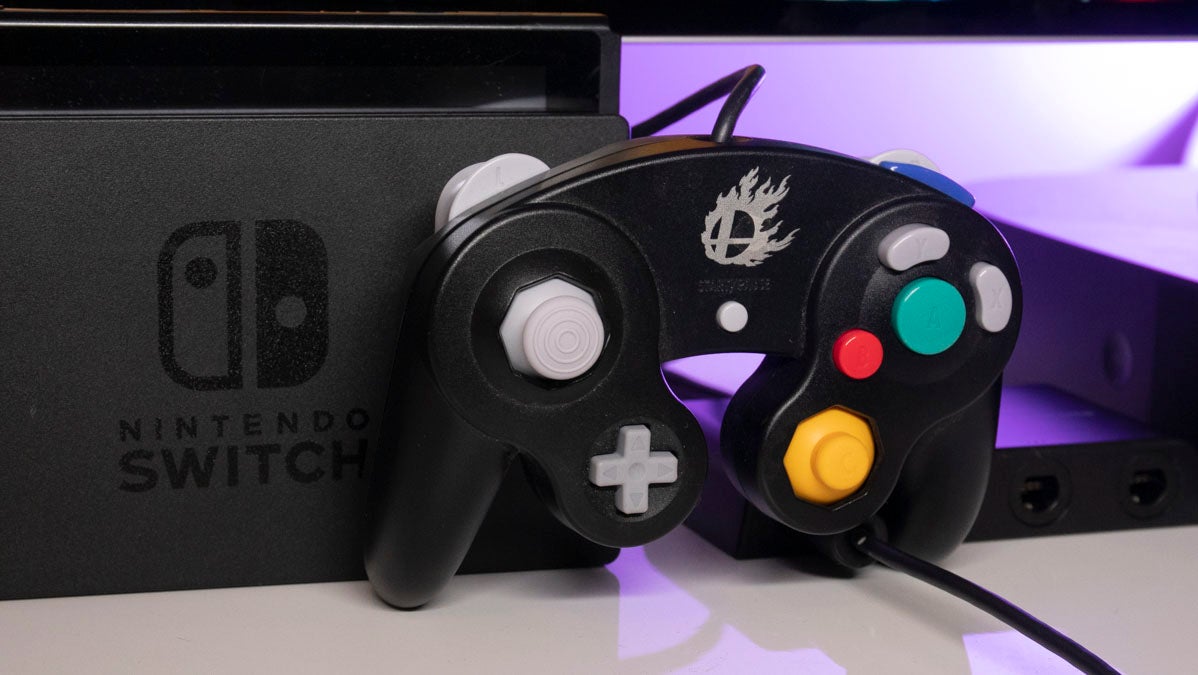 But like the Joy-Cons both the Pro and the PowerA controllers are wireless, which means there could be some lag in gameplay. So a third option is to either pick up an old GameCube controller online, or root around in your closet for the one you might have shoved back there in 2008. Then you can get a USB adaptor. Nintendo makes one, but any USB to Gamecube adaptor should work. Just plug it in and head into the controller settings to test it.

The official one retails for $US70 but its sold out everywhere) and is guaranteed to work, but you can find third party ones intended for the Wii U or PC for under $20. I happened to have an old one I bought for my PC that was built well before the Switch was announced, and it worked perfectly after I set it up.

Set your TV up right

The above suggestions all assume that you’re slotting your Switch into its included dock and playing on your TV, and you might think simply plugging and playing is enough. But not all!

The native resolution for Super Smash Bros. on the Switch is 1080p, and the framerate should be a smooth 60 frames per second. For the purest results, you should play on a TV with a native 1080p resolution and 60Hz refresh rate.

If that isn’t possible, or reasonable, that’s ok! The vast majority of TVs now days are 4K sets with a native 60Hz refresh rate. 4K sets upscale 1080p content, but it’s generally not as messy as it was when 1080p sets would have to upscale 480p content. 4K is another way to say the TV has a resolution of 3840 by 2160 pixels, four times more than a resolution of 1920 by 1080 pixels. The content should look nice and smooth, although it may feel like everything’s a little bigger than you’re used to.

What you do need to be aware of is all of the processing your TV might do to improve the picture. That processing can lead to tiny amounts of lag. To be safe, head into the picture settings, set your TV to a Game setting if available, as this will turn off the worst offenders and improve responsiveness (though picture quality will take a hit). If a Game setting is not available on your TV, or you don’t trust it, then head deeper into the settings. Unfortunately, every TV is different so I can’t tell you exactly which settings to turn off.

What I can tell you is that you should look for ones that alter the picture by making the image sharper or smoother. Also look for settings that have phrases like “Noise Reduction” in them and turn those off as well. Finally, hunt down the settings that give your TV that add “soap opera effect.” These settings often have Motion in their title, like “Motion Control” or “Motion Smoothing” or “TruMotion”.

And if you really want to test the lag and see which settings improve picture quality at the cost of responsiveness, you can spend around $135 on the excellent Leo Bodnar Lag Tester.

Configure the settings you want on your TV and then plug the device into the same port that you plan to use for your Switch using the same cable. Then follow the instructions to see what produces lag and what does not.

And after you’ve done all that you should be good to go and have a set up that’s built for playing Smash as lag free as possible to give you a little bit of an edge. And if you still suck?