The first time I died in Insurgency: Sandstorm, I had just dashed into a building to backup my teammates. Watching a nearby alley, all I could see was dust and smoke. All I could hear were bullets and explosions. Then there was a crash and a gout of flame as a Molotov sailed through the window.

Within seconds, I burned to the death. It was intense, exciting, and a little unsettling.

Insurgency: Sandstorm, out now on PC, is a sequel to the 2014 tactical shooter Insurgency. It is set in an unspecified but perpetually war torn Middle Eastern nation where two teams—private military security operatives and insurgents – face off.

It combines all of the action one might expect from Counter-Strike or Battlefield while adding a more realistic slant where ammo counts and bullets are lethal.

It is a slower and more methodical kind of shooter, filtering multiplayer action through a hardcore military simulation lens into an incredibly compelling experience. Players looking for a hardcore alternative to Black Ops 4 or other games can find it in this game. Insurgency: Sandstorm is tough but incredibly rewarding.

The game’s main mode is a variation of point capture where one team of 14 players has a limited amount of lives and needs to hold off the enemy team, also of 14 players, while they try to capture locations. The enemy has small number of lives as well, but those will restock if they capture a point. It’s a familiar structure, but Insurgency: Sandstorm’s commitment to a more realistic gunplay means that each engagement is incredibly violent and costly.

Whether it’s from the sudden blast of a shotgun, a stray shot through smoke, or an artillery strike, you’re probably going to die. Not only that, but you’re going to die fast. This isn’t a game of beefy soldiers and armoured marines. You are a flesh and blood soldier and the slightest bit of misfortune will leave your corpse on the battlefield.

That extra fragility encourages deliberate gameplay and a lot of coordination with teammates. This isn’t a game where you just run off on your own and ace an enemy squad. You need to know your role and stick together. Your teammates will certainly expect it of you, and it feels good to reward those expectations.

Rolling up to a building with a shotgun, having a buddy ask your to take point, and then teaming up to clear rooms is an intoxicating experience made all the better for the knowledge that the tiniest mistake could have ended in tragedy. Executing proper tactics feels good and requires you to really think about what you’ll do next.

Taken on those terms, Insurgency: Sandstorm is one hell of a multiplayer shooter. When you look at it closer, things become more uncomfortable.

My relationship with first-person shooters has become more complicated this year. I haven’t stopped playing them, but I feel more aware of what it might mean to play these games. The format and the framing of the action in these games makes it strange. They present realistically rendered violence but often fail to engage with the complexities of their settings.

This came up, to an extent with the recent Battlefield game’s expansion and here again in a game that makes me either a private military contractor at war in a Middle Eastern country or a walking cliche of an ‘insurgent.’

It is strange to play a hyper-realistic shooter knowing the weight of American imperialism on the Middle East. This is cop and robbers, except the “cops” are corporate killers and the “robbers” are ethnic groups and countries. And while I’m not suggesting that Insurgency: Sandstorm needs to pause for a modern day history lesson,  there’s no denying that the video game structure flattens real world complexities into something basic.

It’s a military shooter, yes, but it’s hard for me to see this setting and not think about the politics that are involved in real world events that inspired it, especially in light of how much the real War of Terror and America’s various interventions abroad have cost civilians throughout the Middle East.

Is it possible to play this game without worrying about that? Sure. Is that how I find myself approaching it? Absolutely not.

Even if I wanted to, I probably couldn’t ignore those thoughts. This is a brutal game, with some of the most gut-wrenching sound design and raw combat I’ve played through. Each moment is harrowing, every death accompanied by pitiful screams and forced, choking gurgles.

This is standard for many multiplayer games today, but whereas Battlefield V’s self-seriousness is drowned out by the arcade-y gameplay, Insurgency: Sandstorm plays things straight. This is a hardcore game for hardcore people where you shoot people in hardcore ways. The end result is usually a hallway caked in blood and dotted with bodies that have fallen into unimaginable arrangements, like marionettes who had their strings cut.

It’s spellbinding to experience and a bit fucked up if you pause to think about it. 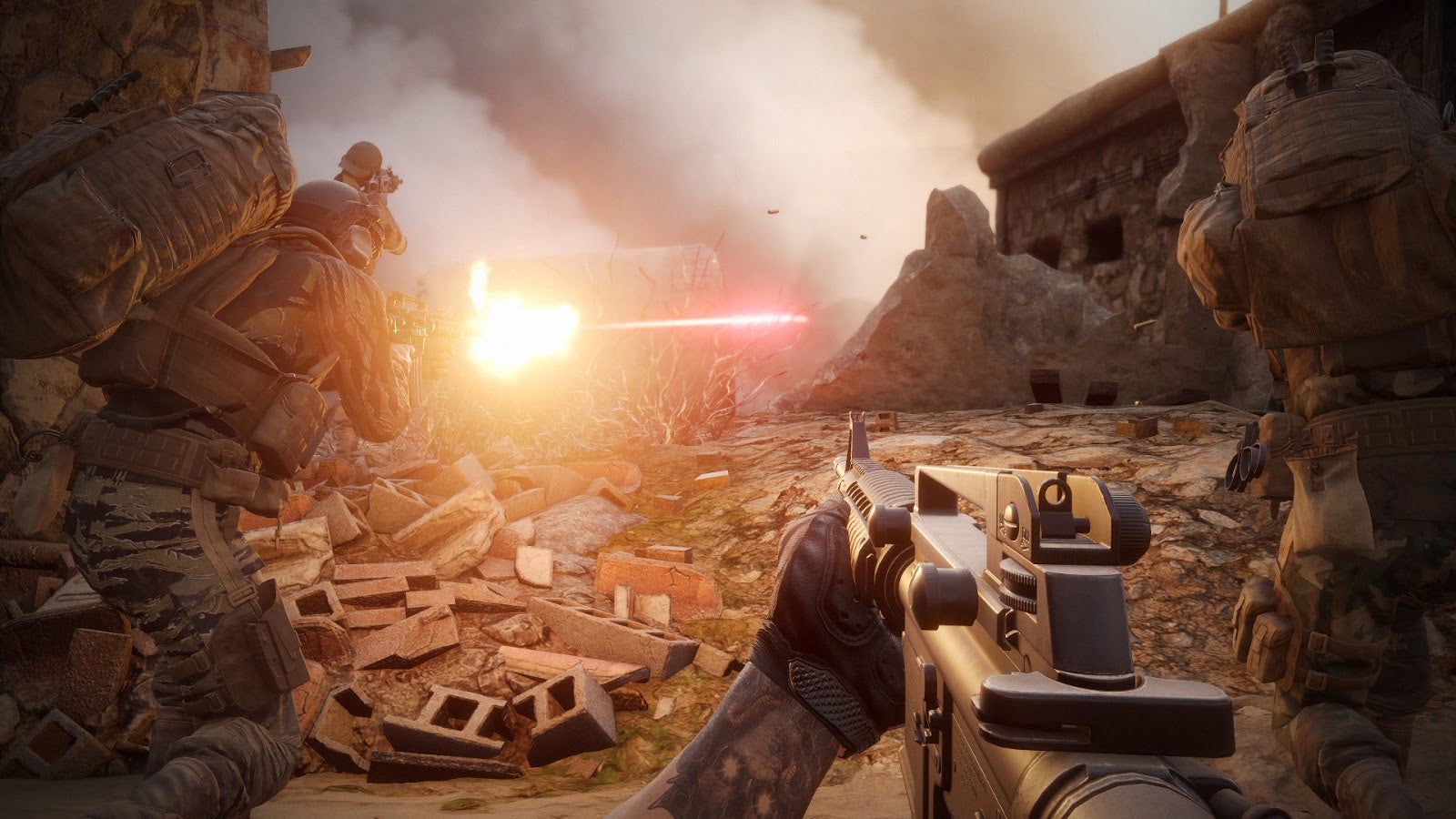 The end result, like Battlefield V, is a game that I will undoubtedly pour countless hours into and whose guns specificities I will learn in tight detail. Insurgency: Sandstorm scratches a very particular itch for me. It provides a slower-paced, highly lethal variation on the multiplayer matches that I already enjoy so much.

This is 100% my kind of shit and I can’t really get it from other kinds of games. That it comes coated in a layer of military fetishism probably won’t stop me from playing, but it does add an unavoidable element of discomfort in every match that can’t be ignored