kingdom new landskingdom two crownsminimalistraw furystrategyswitch
To sign up for our daily newsletter covering the latest news, features and reviews, head HERE. For a running feed of all our stories, follow us on Twitter HERE. Or you can bookmark the Kotaku Australia homepage to visit whenever you need a news fix.

I’ve had a hard time tearing myself away from it these past few days. While it doesn’t feel like a full sequel, it brings a bunch of worthwhile additions that make it superior to the older versions of the game.

Two Crowns is a successor to Kingdom: New Lands, which was an upgraded version of the original Kingdom that was released in 2015., Two Crowns, which released on PC, PS4, Xbox One, and Switch yesterday, was originally planned as an expansion to be released last year.

According to the game’s development team, delays and the growing scope of the project led it to evolve into a stand-alone release whose most notable new features are a campaign mode, two-player coop, and a new Shogun skin that swaps out the game’s traditional medieval European aesthetic for feudal Japan.

As the name and screenshots imply, these games are about slowly building up a medieval European kingdom. You do this by riding a horse back and forth across a 2D side-scrolling countryside and throwing gold coins at everything you find. Need a fortification? Deposit some coins into the mound of dirt where you want it constructed. Want some trees cleared? Use some coins to notch them so the next worker that comes by knows to cut them down.

As you do this, day will turn to night and enemies will attack from the left and/or the right. 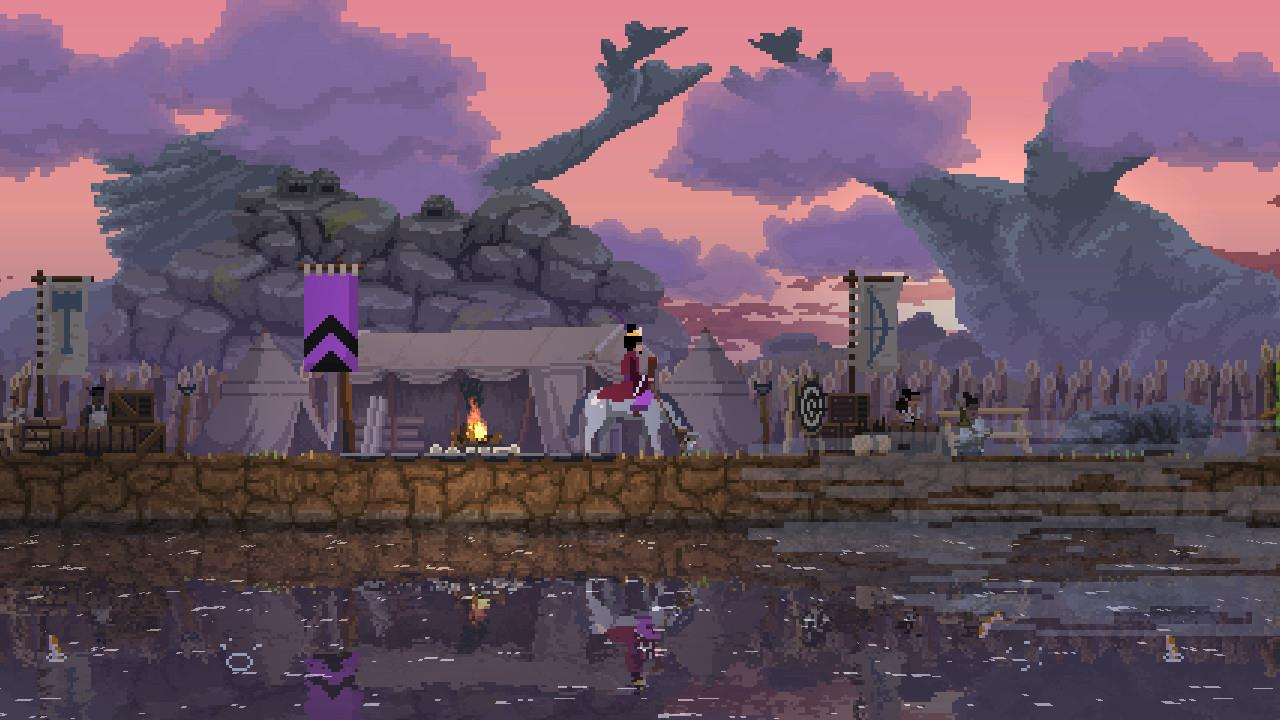 This design boils down potentially complex strategies into a handful of straightforward choices: build up or build out, hire another archer or another builder, walk to the left or go to the right. Because everything else in the game acts by itself, responding automatically in a pre-structured way whenever you dish out some money, there’s nothing to micromanage.

Instead it feels more like tending a garden, planting seeds and occasionally watering their buds. Mostly you’ll wait and watch as nature does most of the work. None of this changes in Two Crowns, which adds pikemen, ninja, fire catapults, and new hermits, one of whom allows you to build a stable to house the various new mounts-including gryphons and salamanders—you find during your adventure.

The lack of direct control and slower, more methodical pacing can sometimes make Kingdom Two Crowns a grind, especially after a big setback that mandates rebuilding. Slow as it can be, the rhythm suits the game’s meditative world though, one in which the pace of action is limited by how quickly people can jog across screen but is filled with natural beauty as they do so.

Where the first two games were classic roguelikes focused on continually building outward, Two Crowns has a campaign which helps direct action toward a clear goal: eradicating The Greed on each of the five islands. Certain resources like stone and gems are scattered across different islands, meaning you can’t just tackle each island one after the other, but instead have to occasionally backtrack, unlocking new secrets and gaining access to better tools that make it possible to fully conquer older areas. 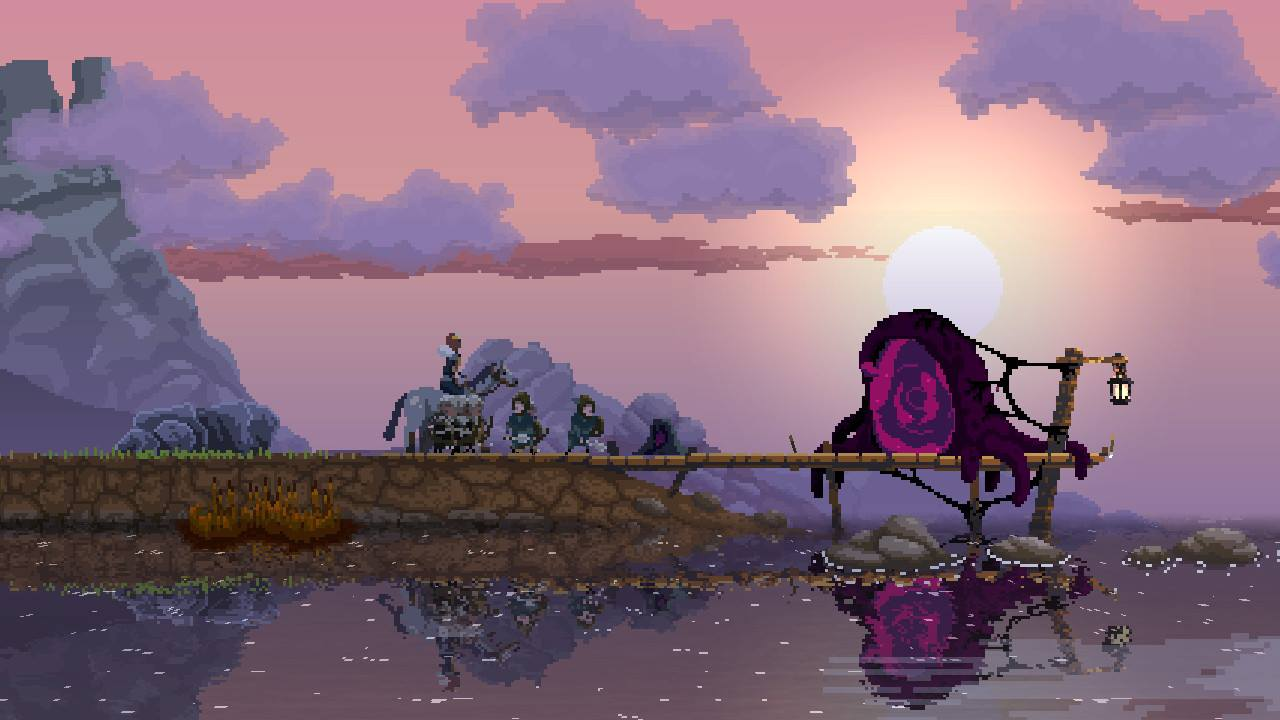 The passage of time, including day and night cycles as well as changing seasons, continues in kingdoms you’d previously built up but are currently away from, meaning it’s also important to occasionally check in on the whole of your growing empire lest it slowly fall into decay.

It adds a further layer of strategy that makes Two Crowns bigger and more complex than earlier versions of the game, even if outside of a few new buildings, unit types, and mounts, the core balance from the earlier games of building, expanding, and defending remains untouched.

The lack of innovation in Two Crowns isn’t a huge problem. I’ve played around 10 hours of Two Crowns on Switch so far and each time I picked it up to play I struggled to put it back down again. I’ve successfully travelled to three of the islands and eradicated The Greed from a couple of the docks, allowing me to travel between them without having to create a new boat each time.

But I feel the need to visit the rest of the game world and successfully get rid of The Greed altogether. One change that makes things easier: unlike in previous games, the game doesn’t end when you die in Two Crowns; your kingdom just falls apart a bunch.

Two Crowns also has multiplayer coop, which can make the game a lot easier by having a second person available to monitor your kingdom. In theory, one person can be in charge of the right side of the map while the other is in charge of the left, sharing money as needed and coordinating defences together.

On PC, Xbox One, and PS4, you can choose to leave your game open to matchmaking with people online, but on Switch, unfortunately, the game currently only has local multiplayer. A spokesperson for the game’s publisher, Raw Fury, told Kotaku in an email that the Switch version of the game should get this feature in the first half of 2019. The Switch does have one advantage when it comes to cooperative play in Two Crowns though, and that’s the Joy-Con which can be detached and paired up individually for easy two-player split screen functionality. I haven’t tried playing with someone else, but I have tried playing two-player by myself and it’s doable.

I’m sure the makers of the game didn’t intend for anyone to play it that way, but it canmake the game a little easier since the map can be explored more efficiently.

Two Crown’s weakest addition is its Shogun campaign. In this mode, which I struggled to access on Switch because it only sometimes appears during an initial loading screen, most of the game only gets a cosmetic change.

The landscape looks different and different music plays, but the progression system is nearly identical, save for a shinobi unit that can attack The Greed from up in the trees, and darker, more dense bamboo forests that make exploration slightly more challenging. The makers of the game have said other reskins are planned as future free DLC and these will do more to change how people play Two Crowns, but, given the iterative nature of the series, having the Shogun mode play it so safe is a bit disappointing.

Two Crowns remains an overall improvement on an already great game. It’s hard to recommend to people who played a lot of the earlier releases, since it repeats so much of what has come before. For people who haven’t indulged, however, it’s a great start.