Though we don’t always think of them as such, the games we play as children (and, let’s be honest — as adults) often help us creatively process information in ways that end up being useful in our everyday lives. For the heroes of this week’s best new comics, though, the lines between fantasy and reality are so blurred that it’s difficult to discern one from the other. 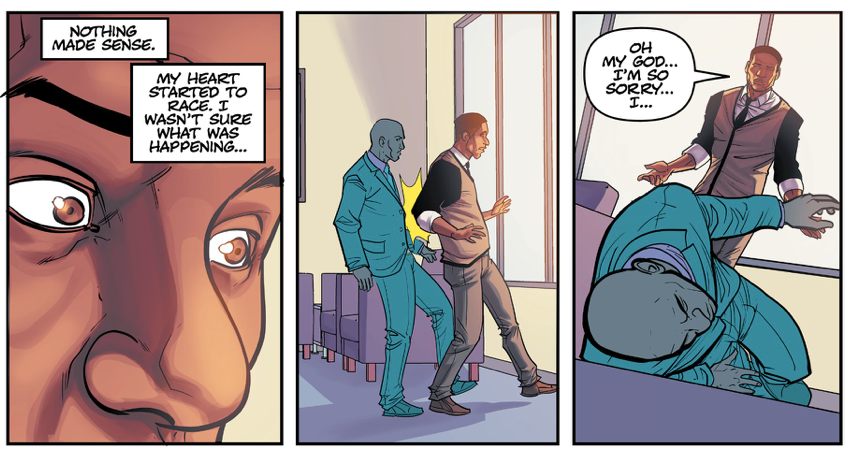 Ray panicking at the frozen world he’s found himself in. (Image: Top Cop)

Through its hero Ray, Top Cow’s The Freeze — from writer Dan Wickline and artist Phililp Sevy — invites us to contemplate just how careful one would have to be in a Rapture-like situation that only they could possibly reverse.

Without any sort of warning, while Ray’s taking care of business at his boring office job, every other person in the world suddenly freezes, almost as if time as stopped.

Ray, the only animate person left, can’t exactly fathom what’s happening, but he quickly comes to realise that time itself hasn’t paused, just the planet’s people, meaning that everything else that was in motion — planes, cars, trains — kept moving and, eventually, crashed, undoubtedly killing whoever happened to be aboard them.

What’s even more mysterious, though, is that Ray’s touch is the one thing capable of reanimating people, and while that might sound as if he’s the newly-chosen solution to the world’s greatest problem, there are consequences. The Freeze forces you to consider what kind of ramifications might come about if you were tasked with “waking” these people up one by one.

With no reason to trust Ray, those he awakens come to dazed, confused, and acutely alarmed at the state of the world — something that has the potential to make them even more dangerous than the Freeze itself. (Dan Wickline, Phililp Sevy, Top Cow)

Solomon telling his friends about the game they’re about to play. (Image: Stephanie Hans, Image Comics)

The very best rounds of Dungeons & Dragons or really any good tabletop roleplaying game are good because they’re more than the sum of their parts. It’s not just the players, or the plot lines, or the game’s mechanics, but rather the confluence of those things that result in a kind of magic that can draw people into fantastical worlds and make them feel like something larger.

Image’s Die, from writer Kieron Gillen and artist Stephanie Hans, exists somewhere between the Goblins & Gargoyles-addicted world of Riverdale and, curiously, C.S. Lewis’ The Lion, The Witch, and The Wardrobe. What begins as an exciting game between friends huddled in a suburban bedroom quickly becomes something dark and dangerous that spirits the kids away from the world they know to an unknown world full that they can’t, or won’t, explain.

The night the six kids decide to play their game together, they vanish without a trace — and it isn’t until two years later that five of them return, one of whom is missing an arm. Whatever horrors the kids faced during their time away are things they tuck deep within themselves and refuse to speak about until they’re all well into their middle age, having gone their separate ways and carved out lives for themselves.

Hans’ shadow-drenched illustrations give you the sense that the magic the book’s heroes are unwittingly playing with is something far more insidious than any of them could fully understand, and depending on your sensibilities, it’ll either scare you off from tabletop for the rest of your life, or make you hungry to get a party together as quickly as you can. (Kieron Gillen, Stephanie Hans, Image Comics) 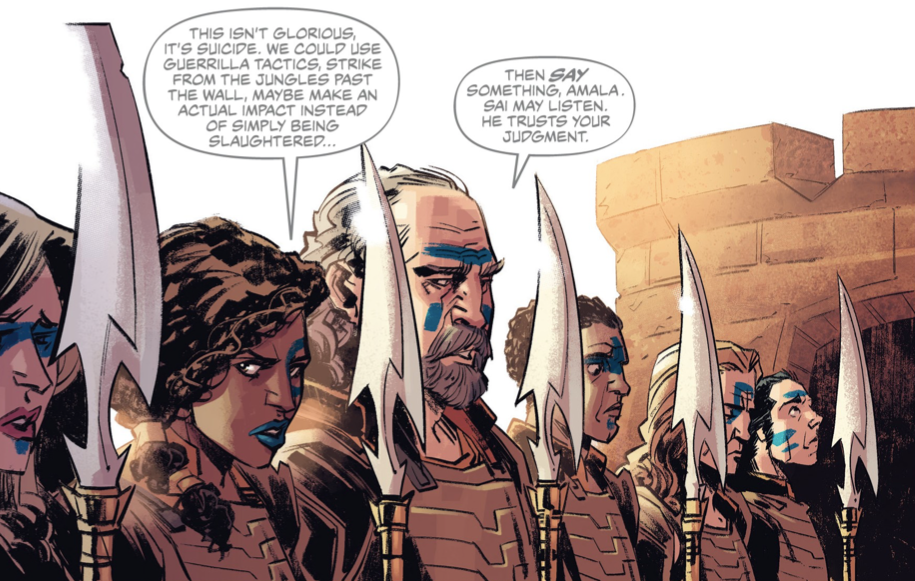 Amala realising the battle she’s about to fight is going to be a losing one. (Image: Eduardo Ferigato, Marcelo Costa, Image Comics)

There are certain genre books with leading protagonists who are so clearly ciphers for the (almost always male) authors that it makes it difficult to really lose one’s self in the story or even really cheer for its intended heroes.

Image’s Self/Made from writer Mat Groom and artists Eduardo Ferigato and Marcelo Costa opens with a familiar enough premise. The noble, magical kingdom of Arcadia finds itself at war with evil forces from beyond its walls that are preparing to harness a weapon that has the potential to end the world. Naturally, the Arcadians step up to the plate to do what they can to prevent that from happening.

But something about the course of events playing out in soldier Amala’s life causes her to consider whether everything is as it should be. Though nothing is technically “off” with her world, Amala senses something about herself that’s out of step with reality as she charges into battle, manages to become the lone survivor of the conflict, and realises that she must team up with a pompous prince if there’s to be any hope of preventing the end of things.

Though some of Self/Made initially comes off as a bit overly familiar, the first issue introduces a twist that makes all of it make so much more sense, and will inspire you to go back, reread it, and prepare yourself for what’s next. (Mat Groom, Eduardo Ferigato, Image)