My Favourite Games Of 2018: Adam Wells

It’s that most wonderful time of year, the end. It’s also that time where we try and rank wholly disparate games to say which ones we enjoyed the most. Here are the top ten games that I played this year.

This year has been an absolute cracker with some of the AAA-est AAA games ever released, some wonderful indie titles, more roguelikes than you can shake a stick at and enough board games to build a respectable fort out of.

Playing them all was impossible. Trying to rank them was almost as hard. So I took a cop-out and put my top ten in alphabetical order because cutting this list down to ten was enough. Precision platformers are not usually my thing. So much so that I put off playing Celeste for a long time despite it only skirting along the edges of the genre. Yet when I finally relented, I was rewarded with a platformer with wonderfully responsive controls, a soundtrack that I still hum along to and a surprisingly touching story that hit close to home.

There is a school of game design that gives players the bare minimum tools that they need to succeed and hopes that they will learn from their mistakes, push on and master the game. Every mistake, every death, every failure is your own. So is every success and they feel all the sweeter for it.

Celeste embraces this philosophy whole-heartedly and feels wholesomely pleasant even during the many, many instances of death and failure. I have a lot of misgivings with Dead Cells, mostly based on my pre-conceived notions of what a metroidvania should be and what a roguelike should be. Dead Cells takes elements of both genres and while it doesn’t strike the right balance between them, it does something far more important: it feels bloody fantastic to play.

The feeling of pace as you rush through the levels. Finding a new weapon and having that satisfying thunk as you use it to annihilate enemies. The bopping soundtrack that drives you forward. Even the ridiculous amount of character crammed into the game’s animations.

I’m convinced that the team behind Dead Cells are witches because there’s no other way to explain how they’ve managed to make all of these elements work so well. Kotaku readers voted it their game of the year and there was no way I could ever exclude it from this list.

Taking everything that I loved about Naughty Dog’s games and throwing in some of the meatiest combat we’ve seen in year, God of War is everything that is right with AAA gaming. Wandering the nine realms with Atreus gives plenty of opportunities for great character moments that turned a series better known for its action into the complete package.

God of War was never going to be a rote action game. The combat alone separates it from the pack with weighty animations and glorious sound design making it deeply satisfying to carve through hordes of enemies with Kratos’s axe. Then there’s the additional challenge of the Valkyrie battles to prove your mastery and feel godlike. Straddling the line between board game and video game, the battle of mech versus Vek consumed me for countless hours earlier this year. I’m a complete sucker for a good time-travel story and using that as a way to justify the tight gameplay loop of resetting timeless was a feat of brilliance.

Into The Breach takes positional, tactical combat with your plucky team of mech pilots against the endless army of giant bugs known as the Vek. Different teams of mechs have different strengths and weaknesses that allow for a ridiculously broad range of play styles. Going through and unlocking all of the game’s achievements to unlock the final, secret squad was a great way to drive me out of my comfort zone while seeing everything that this brilliant game had to offer.

Finding ways to navigate through battles by pushing enemies into each other or pulling them away from the building they are attempting to destroy is great. Taking it to the next level and chaining these actions together is even better. The decision making and careful planning needed to truly succeed at Into the Breach is tantalisingly close to the board games that I enjoy.

Don’t let its position in the middle of this alphabetically arranged list fool you, Into the Breach is my game of the year. For years, I called myself a recovering Magic player. It took the release of Dominaria – a nostalgia-fueled set that showcased some of the earlier years of Magic while bringing together decades of gradual improvements – to drive me into a full relapse.

Magic has always stood as the pinnacle of rules design. It’s not perfect but it comes far closer than many other games with a fraction of the complexity. That cohesive rules design has always tingled the nerdier parts of my brain, so diving back in after so many years away felt profoundly satisfying.

That the most recent sets have had strong, enjoyable draft formats where you build your deck from cards plucked out of booster packs you pass around a table is all the better. Drafting is one of my favourite mechanics in board games and following up a satisfying draft with a few games of Magic to see just how well you were able to make the right choices is just nice. A game about communication where you can’t communicate with your teammates. The Mind is a dangerous filler game that can – and will – be played for hours on end as you and your friends try desperately to master it.

The premise is remarkably simple: the players must play their cards in the correct order without communicating in any way. You think it’s your turn to play your card? Play it. Or maybe you should hold on for just a moment because you fear that someone else has a lower card that needs to be played first.

During PAX this year, my friends and I played The Mind endlessly, never quite succeeding. The more we played, the better we understood how each other would act and we came closer and closer to success. There was a sudden and desperate rush of adrenaline as we played a flurry of cards sometimes followed by relief that we made it through that round. Often followed by misery as someone misplayed and our run was ended.

One hundred cards and brinksmanship. That’s all it takes. Trudging around an abandoned ship doing insurance assessments doesn’t sound like the most enticing game pitch ever. Then again, neither did processing paperwork at a border checkpoint. Lucas Pope delivered on both fronts.

Untangling the mystery of what happened to the crew of the Obra Dinn takes all sorts of deductive skills as you wade through frozen memories of people’s deaths. Who people are standing next to on the official portrait, what shoes they’re wearing and what bunk they’re sleeping in are all things that can lead to working out just who everyone is.

Scratching the same itch that drives me to rush my way through escape rooms, Return of the Obra Dinn is an imperfect masterpiece. The game’s journal doesn’t give you quite enough tools to do everything that you need to in order to solve the mystery but a good old pen and paper will cover the gaps. 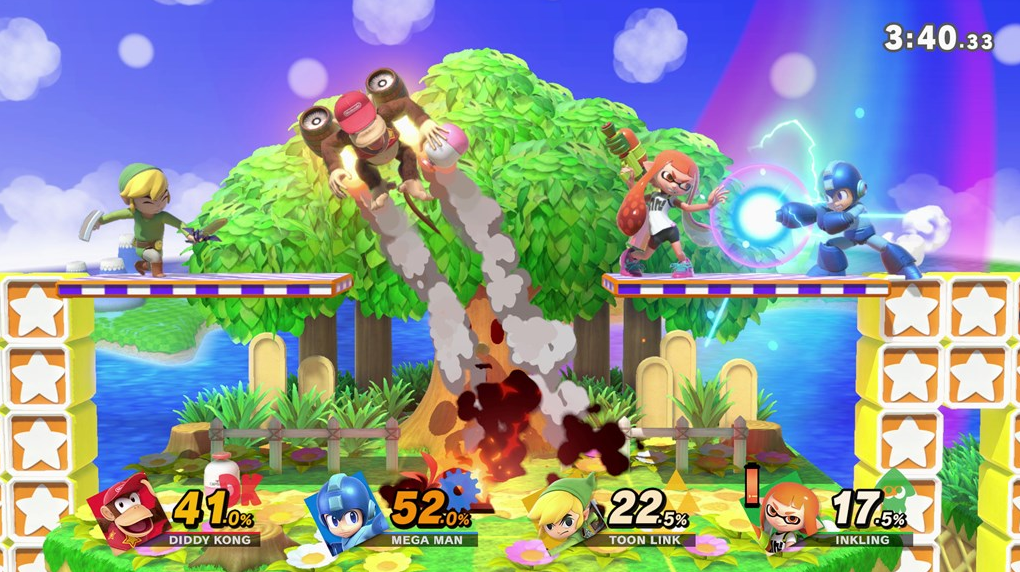 To some, Smash is a hardcore fighting game. To others, it’s a hectic party game. There are so many ways to enjoy Super Smash Bros Ultimate that it’s hard not to be overwhelmed by what an achievement it is.

Part of the joy of Smash comes from nostalgia. Seeing the ever-growing cast try to throw each other off of the stage while decades of video games soundtracks play in the background. That’s not the only nostalgia. My little brother and I played the original N64 game endlessly back when it first came out. We never got good and even now, I shy away from competitive multiplayer because it’s too much of investment.

Sakurai and his team have managed to cram a whole lot of Smash into this latest addition to the mascot fighter series. More Smash is pretty hard not to enjoy and I have no intentions whatsoever of resisting. It’s just too much fun. How do you improve on Tetris? By turning it into a musical experience with psychedelic visual. It was something I didn’t know that I needed in my life until I saw it. Many hours of dropping tetriminoes later, I still want more.

My only regret with Tetris Effect is that I don’t have a VR headset to fully immerse myself in the game. Even without that, taking one of the greatest games designs of all time and somehow improving upon it is a magnificent feat.

Trauma Center: Under the Knife 2 This is the second year in a row that I’ve given the nod to this 2008 Nintendo DS title. Under the Knife 2 is still one of my all-time favourite games. It pushes the DS’s touchscreen to the absolute limit in a ridiculous series of operations that get increasingly anime as the game goes on. You start off by reconstructing the leg of a poacher that was bitten by an alligator then finish the game off by removing an eye from the heart of a woman who is trying to riddle the world with guilt.

Don’t try to make sense of it, just enjoy the madness for what it is.

Not only does the game have an incredibly challenging difficulty curve, it has a kickass soundtrack – it’s an Atlus game, after all.

Yet UTK2 has earned its place on this list for more reasons than just the gameplay, ithas given me opportunities that I had never dreamed of. I’ve been speedrunning this game for several years now and have almost pushed the world record time to under two hours. Soon I’ll be travelling to the United States for the first time so that I can perform a speedrun live for Awesome Games Done Quick. To get to take part in an event I’ve enjoyed for years because of an obscure DS game that I’m pretty decent at is something I would’ve never, ever imagine possible.

As an added bonus, I get to run around Washington DC quoting The West Wing.

And a quick shout-out to Hitman 2, Monster Hunter: World, Red Dead Redemption 2 and Two Point Hospital, all games that would’ve had a very real chance of making this list if only I had played them enough.