Happy Holidays, everyone! Welcome back to Gaming Shelf, io9’s column all about tabletop games and roleplaying. As we get ready for the most wonderful time of the year, you might have a few extra gifts you’re getting ready to buy for family and friends…or perhaps for yourself. Here’s our latest list of some of the coolest games that have just come out, some others that are coming up, and a few crowdfunding campaigns that could also stuff some stockings. Game on!

Here’s Negan: The Board Game

Interested in playing as the bad guys? Mantic Games has finally released its long-awaited Walking Dead game, Here’s Negan: The Board Game.

Inspired by the standalone comic from the TWD saga, this cooperative tabletop miniatures game has players take on the roles of Negan’s lieutenants, striving to win favour as Negan takes over Sanctuary from the Walkers and becomes the leader of the Saviors. It’s a twist on the typical zombie survival horror game — because not only are you trying to survive, but you’re also quintessentially a villain. 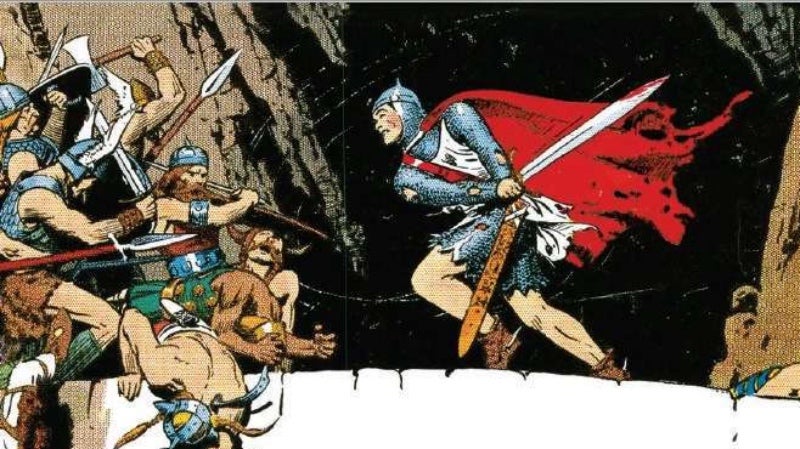 The original version of this tabletop RPG came out in 1989, and was praised for its accessibility for newer and younger players. This new edition, which was funded on Kickstarter, features an all-colour rulebook that showcases some of Foster’s great artwork. Plus, there’s a separate episode book that includes a number of scenarios to try out from several guest authors, including Shannon Appelcline, Jeff Grubb, and Monica Valentinelli.

Prince Valiant is set to come out some time early next year, and both volumes are available for preorder for under $30 on DriveThruRPG.

IELLO has recently released its latest card game, Nessos, an ancient Greek tale where players take on the roles of heroes tasked with imprisoning mythological creatures into sacred jars to give them to the gods.

In order to do so, players have to try and trick each other so they can nab the most valuable creatures — while avoiding the wrath of Charon, the ferryman of Hades. 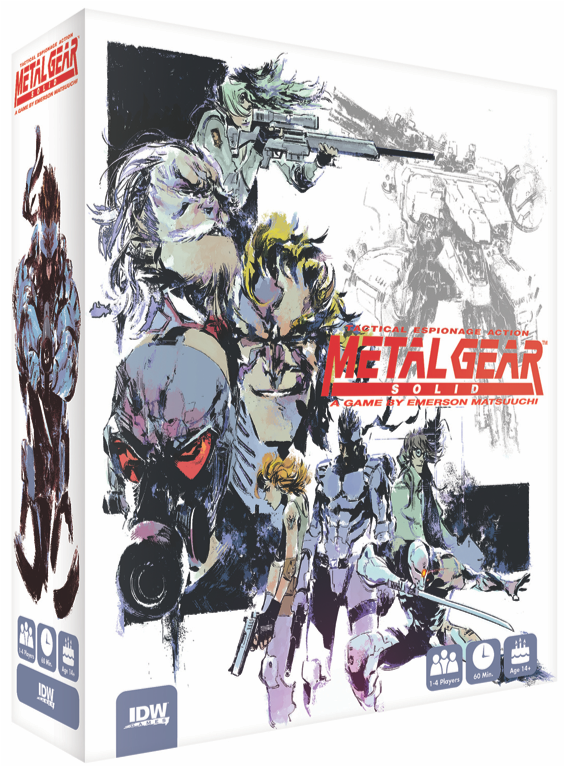 SNAAAAAAAAAKE! IDW Games has announced it’s teaming up with Konami Digital Entertainment for a tabletop miniatures board game based on the Metal Gear Solid series.

Featuring miniatures from sculptor Francesco Orrù and art by Kenneth Loh, Metal Gear Solid: The Board Game will be a cooperative game where players take on the roles of characters like Meryl Silverburgh, Grey Fox, and, of course, Solid Snake.

According to a press release, the board game boasts “a highly dynamic A.I. system and sandbox gameplay,” meaning that each game can be played out in a number of different ways…even if the general missions are the same. Metal Gear Solid: The Board Game will be previewed at 2019’s E3, and the game is expected to come out sometime that year. 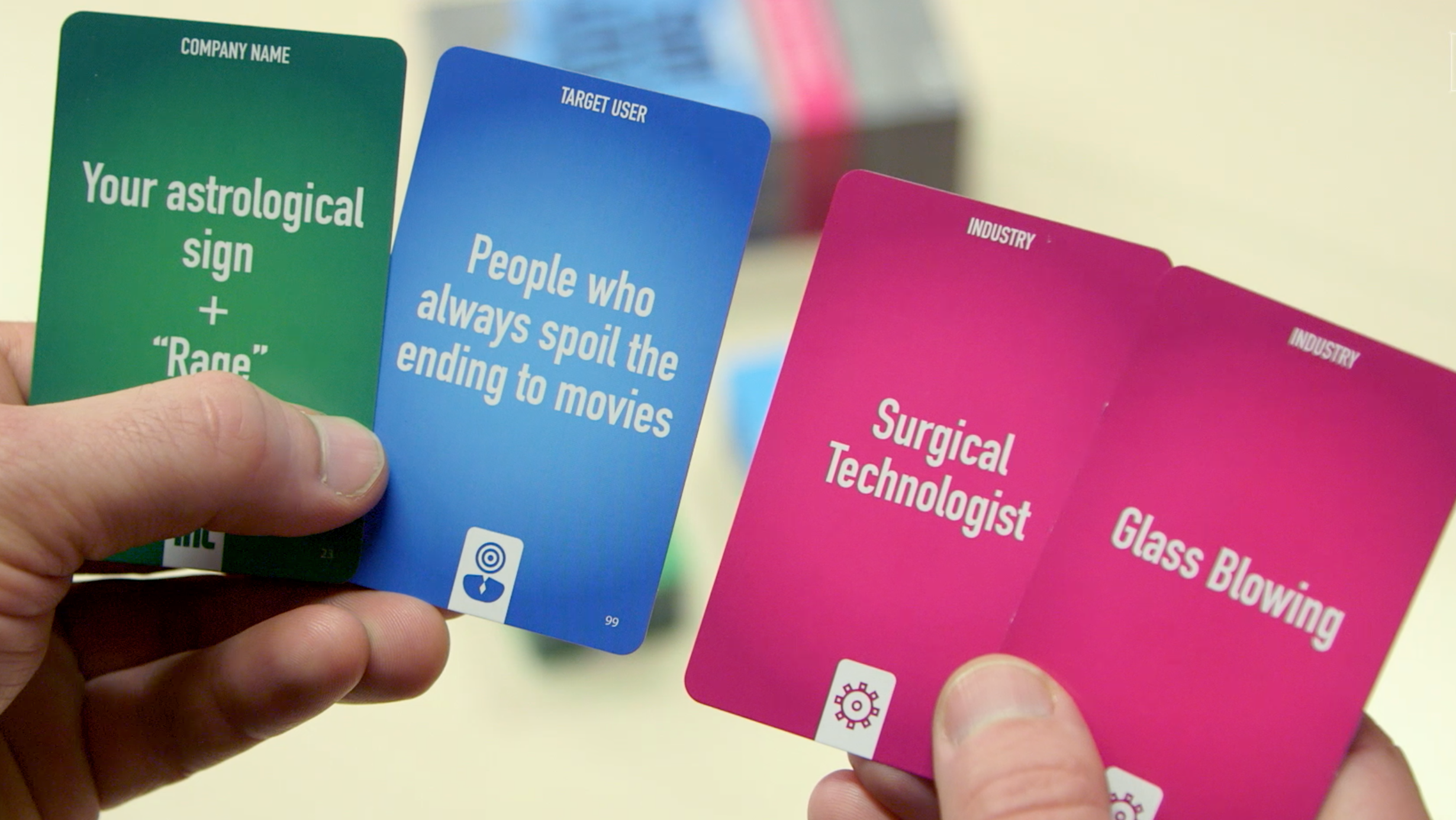 Some of the card options for Silicon Valley Startups. (Image: Mattel)

For fans of Shark Tank, or anyone who likes defending terrible ideas, this game actually sounds like fun. Mattel has released a new card game called Silicon Valley Startups, where players have to pitch startup businesses to potential investors.

Players draw random pitch idea combinations—like “sinister waffle irons for preschoolers”—and then have to explain why it’s actually a good idea. On its face, it sounds like a game about about glorifying capitalism, but it’s more about improv than money money money. Silicon Valley Startups is currently available at Target, and will be released elsewhere in early 2019.

Tainted Grail: The Fall of Avalon

Normally, we wouldn’t put a Kickstarter campaign in the News & Releases section, but Tainted Grail is a notable exception. Fully funded within the first minute, Awaken Realm’s Tainted Grail: The Fall of Avalon is currently sitting at over $4 million, with several days left in the fundraising campaign (the goal was $69,541).

This indicates that this could be the next big game when it comes out August 2019.

Tainted Grail was designed by Polish fantasy writer Krzysztof Piskorski and Awaken Realms owner Marcin Świerkot. It’s an immersive cooperative game for one to four players—set in the world of Arthurian legend—which features over 100,000 words of interwoven story scripts and at least 1,000 pieces of art. Nothing about this game is for the faint of heart.

It’s intense, it’s immersive, and it looks incredible. This one is definitely recommended for more serious gamers.

A YouTube user going by the name Sound Board recently shared his latest gaming creation on BoardGameGeek: an Alexa or Google Home-assisted rulebook! And the best part is that it’s totally free.

Sound Board has shared the template to create your own interactive rulebook through a home assist system, meaning you can ask Alexa for clarification instead of digging through all your notes when someone has a question. It’s a neat idea, and we’re just glad someone thought of it. Saves us the trouble of having to learn to do computer stuff. 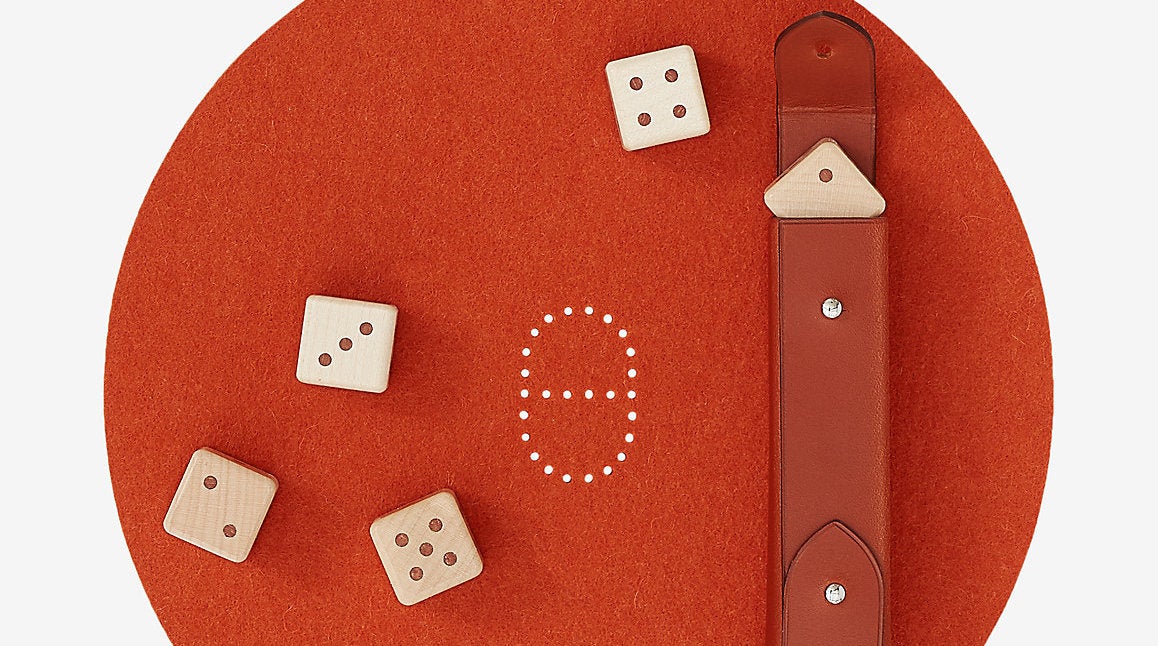 Is your Rite-Aid $4 dice set feeling a bit too…homely? Well, Hermés has released a $1,460 dice game in maple marquetry, with a wool felt map and bridle leather case. Is there anything else special about it?
No, it’s just Hermés dice.

For the record, we don’t actually think you should buy these. We’re just baffled that someone thought paying a grand for dice was a good idea. And yet, we guarantee that someone has already bought them. 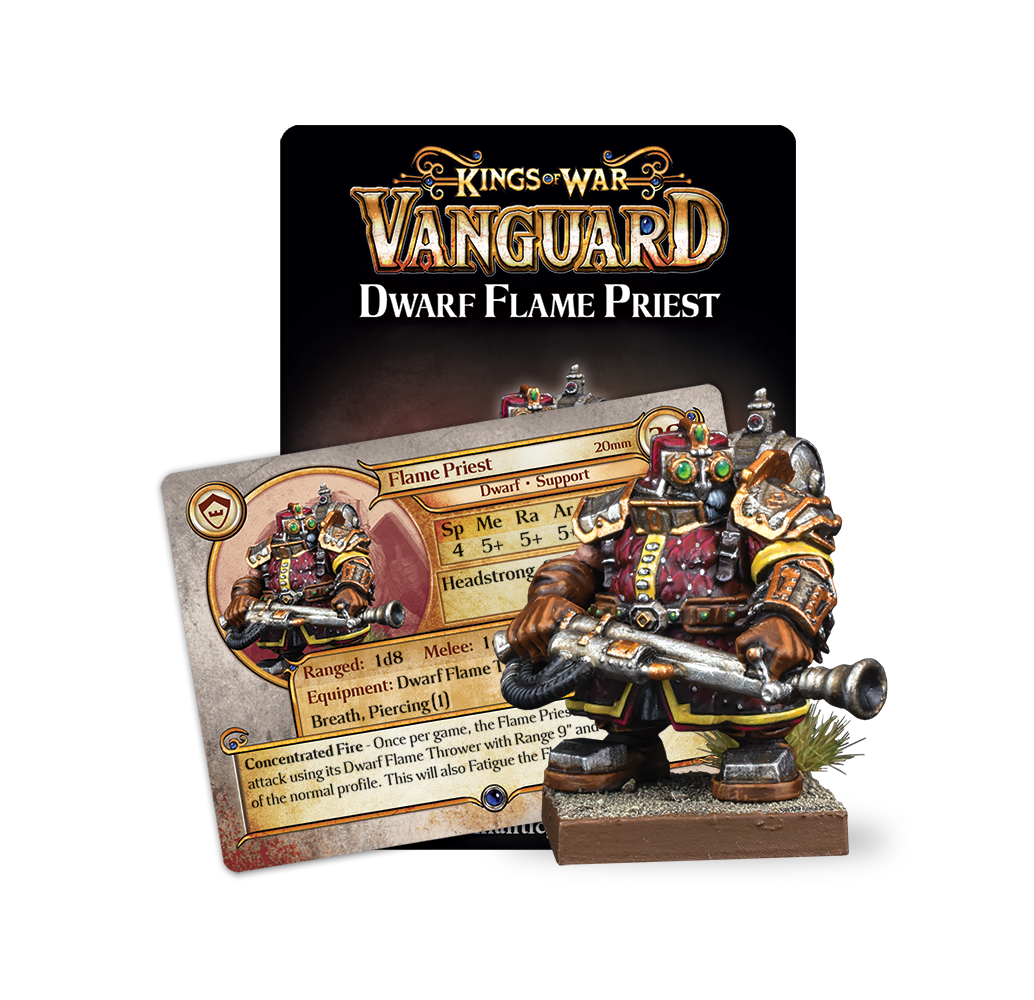 Kings of War: Vanguard is finally adding a Dwarf faction! The Dwarfs are a strong group of fighters with solid ranged options and lots of great armour. There’s the Dwarf Warband Set, a collection of 10 miniatures and 21 Warband stat cards that provide a well-rounded addition to the game.

But if you want to add to your team after that, there are individual support packs, featuring characters like the Flame Priest and the Packmaster, which comes with its own vicious dog. The expansion is available for pre-order and will be released on January 21, 2019.

RWBY: Combat Ready is getting bigger with Arcane Warriors’ new Villains Expansion, which lets players replace the Villain Fury token in the base game with miniatures of the three main villains. According to PhD Games, it will be available for pre-order starting February 1, 2019, and comes out March 20, 2019. 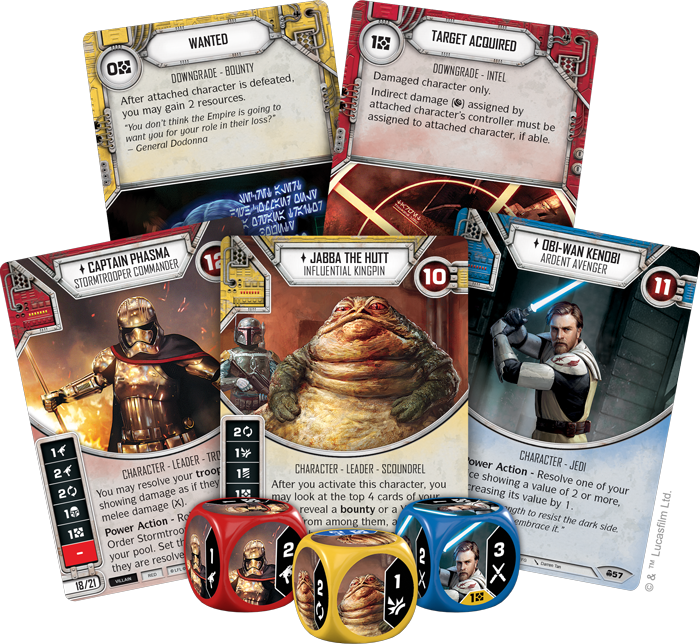 Some of the new cards for Star Wars: Destiny. (Image: Fantasy Flight Games)

If you’re looking to add to your Star Wars: Destiny deck, Fantasy Flight Games has announced two new starter sets, as well as a new booster pack. There’s the General Grievous and Obi-Wan Kenobi Starter Sets, the latter of which features Duchess Satine Kryze from The Clone Wars.

The Convergence booster pack adds new themes and a new card type, which includes a new bounties setting. All three of the sets will be available sometime in early 2019.

Stonehenge and the Sun

This thoughtful puzzle game from itten has players building Stonehenge from scratch so as to avoid the treacherous path of the sun, which is represented by a metal ball that hangs from above.

This game isn’t easily accessible by everyone (you have to be ok with hanging something from your ceiling), but for those who have the space, it looks like a beautiful and calming puzzle experience. Stonehenge and the Sun will be on Kickstarter through January 19.

I’m a real sucker for storytelling games, and this one looks like an excellent addition to the subgenre. Situations is a card game in which players use cards to build a story together — adding characters, actions, plot twists, and so forth.

The best part about it is how the cards are arranged: Each one comes with a set of reaction options, which encourages people to take stories in a multitude of directions. Situations has already gotten its funding, and will be on Kickstarter through December 31.

A tabletop miniatures game where chicken clans fight each other for dominion over Chicken Island? Sign me up! Not only is the artwork hilarious, but it also features four different styles of gameplay: solo, co-op, free-for-all, and capture the flag.

War For Chicken Island has already been funded, and will be on Kickstarter through December 28.

What is it with games and chickens right now? In this card game from Jesse Harding, players take on the role of a group of chicken scientists who’ve opened a time vortex, and the goal is to reach the escape pod first and get the hell out of there. It’s a ruthless journey into “survival of the fittest,” just one that involves chickens.

Chicken Time Warp will be on Kickstarter through January 29.

Now that we’ve gotten that “House Party” song stuck in your head…House Rules is a fantasy fighting game with a unique “house rules” option—the cards are laminated with fill-in-the-blank spots to add customised weapons, actions, or even general rules of the game.

It’s an interesting idea that would especially work with close groups of friends, who perhaps already like establishing their own house rules.

House Rules will be on Kickstarter through January 3.