Netflix Remakes Saint Seiya And So Far, The Fan Reaction Is Not Good

netflixsaint seiya
Facebook may have decided that you shouldn’t see the news, but we think you deserve to be in the know with Kotaku Australia’s reporting. To sign up for our daily newsletter covering the latest news, features and reviews, head HERE. For a running feed of all our stories, follow us on Twitter HERE. Or you can bookmark the Kotaku Australia homepage to visit whenever you need a news fix.

Saint Seiya: Knights of the Zodiac is Netflix’s updated take on the classic anime. Andromeda Shun, originally a male character, has been reworked as a female character.

The trailer (below) is racking up dislikes on YouTube.

Eugene Son, the remake’s producer, took to Twitter to explain the decision. Via Japanese site Hachima, here are his tweets: 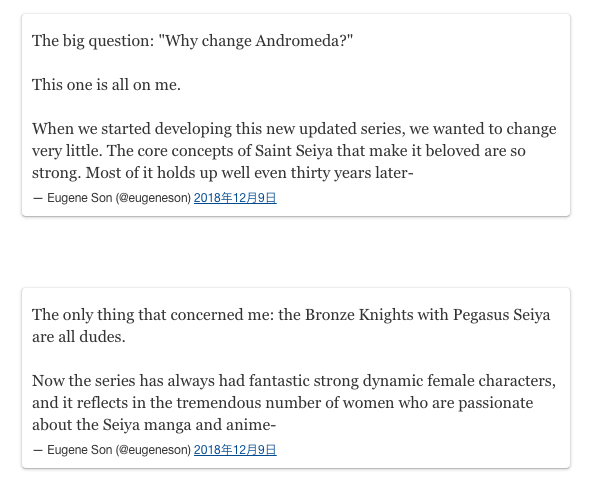 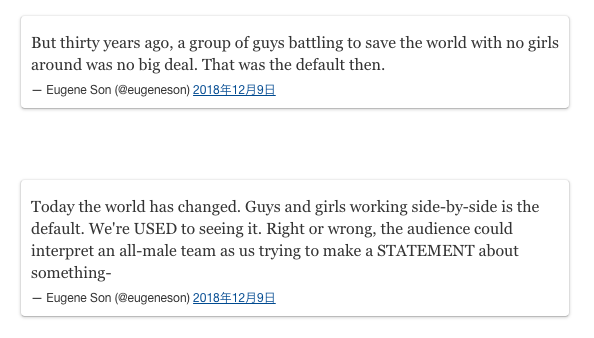 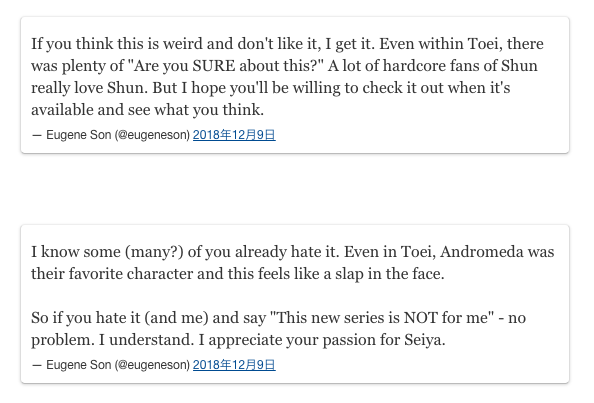 Inclusiveness is great! The sensitivity to the current climate is admirable. Viewers who aren’t familiar with the series, especially younger viewers, will probably be oblivious to the change. However, for Saint Seiya fans, the decision overlooks the character’s essence and what makes him special.

Here is an excellent Twitter thread by Tales of Nothing co-creator Fanny Rodriguez that explains why:

If this was about giving the audience women representation on the remake, they could easily go and explore Saori's character. She's Athena reincarnation and the one keeping it all from falling apart when everyone was fighting. pic.twitter.com/YxAd6a5U96

But back to Shun, while I'll say that we should give the series a chance. Making Shun a woman seems more of a backwards move than any other thing. Let me explain. pic.twitter.com/HVwlykRciY

Not only for that he was my fave bronze saint as a girl, he could kick ass if he wanted to. He was the only one to defeated a gold saint without resorting to killing himself. His personality and that he decides how to fight as a male character it's a great role model. pic.twitter.com/pZY9WXey3k

But at the end, one must give the chance to the reboots and remakes that are being done. Lots of people work on them to toss it out for one of two things without seeing the end product. That said, the decision made with Shun it's still not great imo…

Let's just hope the dialogue created on social media regarding these topics is considered in future projects, whether they are from an existing franchise or a new one.

Besides these thoughtful reasons, it also feels like other female Saint Seiya characters might have been overlooked when making a decision that could have better satisfied longtime fans.

You know Netflix, I'm not a saint seiya fan and all but…if you wanted a female lead for your new series and still have them wear the Pegasus armor you didn't have to rule 63 Shun when you ALREADY HAVE SHOKO

You get to promote the MC for her series and still get this one! pic.twitter.com/gJ5TZGfAzZ

Turning Shun into a girl just DESTROYS the message behind his character and reinforces the idea that men shouldn't be fragile, anti-fights etc.!! If you want some REAL girl power in Saint Seiya, go watch #SaintiaSho (A SPIN-OFF LED BY WOMEN!!!). pic.twitter.com/azXG561Tx4

Saint Seiya: Knights of the Zodiac debuts on Netflix next winter.