Oh No Xbox And Adidas What Are You Doing

Please Enjoy This Brief Courtroom Description Of A Fortnite Trailer

red dead onlinered dead redemption 2rockstarrockstar gamesxbox one
To sign up for our daily newsletter covering the latest news, features and reviews, head HERE. For a running feed of all our stories, follow us on Twitter HERE. Or you can bookmark the Kotaku Australia homepage to visit whenever you need a news fix.

Red Dead Online’s launch has been rocky. While there’s plenty of enjoyable rootin’ and shootin’, the meager rewards for playing have frustrated many players.

In a blog post today, Rockstar announced new changes – and free rewards – that should make it easier to rake in the cash and make Dutch happy.

Players can acquire two currencies, money and gold pieces, but getting their hands on enough loot to buy new equipment was a hassle. Today, Rockstar announced that the following changes to the game’s economy:

Increasing the cash and gold payments across a number of different activities including Free Roam Missions, Free Roam Events, replays of A Land of Opportunities Missions, Showdown Series modes and more.

Reducing the prices of most weapons in the Wheeler, Rawson & Co Catalogue and Gunsmiths. For players that have already purchased weapons at the previous prices, we will automatically deposit the difference to player balances starting today – please look for an alert message the next time you log in to the Red Dead Online Beta to notify you of this change, refunds may take up until December 10th to reach all players.

Balancing the values of select pelts, skins and fish as well as horse reviver and pamphlets.

Players have been clamoring for tweaks since launch, when it become clear that it would take a long time to unlock new items. Playing through free roam events or matches in the game’s competitive Showdown playlist simply didn’t provide enough money for the time spent. It didn’t help that the value listed for some things was absurd. You could sell a can of beans for more profit than if you sold a gold ring. Weapons and special gear were prohibitively expensive.

A Mauser Pistol cost $US1,000 ingame dollars, a sum that our writer Zack Zwiezen couldn’t reach in nearly 15 hours of playtime. Insuring your horse, which brings it back instantly if another player kills it, cost five gold bars. Gold bars are the game’s premium currency that players can earn if they find 100 gold pieces.

It cannot be purchased with real world money yet. One Redditor calculated that it would take an average of eight hours to earn a single gold bar. 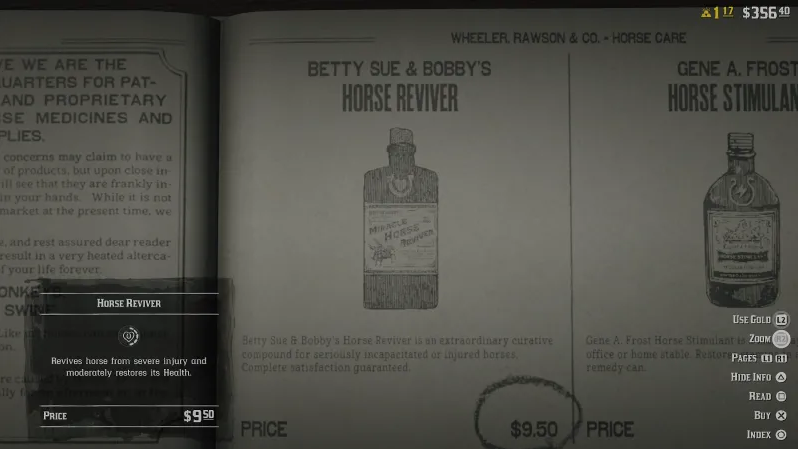 Rockstar’s changes come after an earlier announcement on Monday that they would be adjusting both the game’s economy and implementing bug fixes.

In addition to increasing rewards and lowering prices, they are giving 250 in-game dollars and 15 gold bars to any player who plays the game through today. It should be enough to help players make up for lost time in multiplayer playlists.

“We want to thank the Red Dead community for playing and sending us tons of valuable feedback during the first full week of the Red Dead Online Beta’s availability,” Rockstar’s blog post said. “This feedback is crucial to help shape the game as we move forward.”