raresea of thievesshrouded spoilsxbox one
Facebook may have decided that you shouldn’t see the news, but we think you deserve to be in the know with Kotaku Australia’s reporting. To sign up for our daily newsletter covering the latest news, features and reviews, head HERE. For a running feed of all our stories, follow us on Twitter HERE. Or you can bookmark the Kotaku Australia homepage to visit whenever you need a news fix.

When Sea of Thieves launched back in March, it felt pretty barren. The open sea in the Xbox and PC pirate game was areas, encouraging pirates to team up to take on sharks, survive volcanoes and explore distant islands.

The latest free update, Shrouded Spoils, adds even more dangerous foes, new weather conditions like fog, and more loot. With these updates, the game is worth trying, especially if you did once and didn’t find enough to do.

Shrouded Spoils makes Sea of Thieves a more surprising game. In the game’s first few months, sailing was fun but predictable, only broken up by the occasional kraken attack and arsehole players trying to steal your loot. Giant sharks and skeleton ships were eventually added but initially contained in certain areas.

Shrouded Spoils brings those threats to the rest of the world and gives old foes new tricks. There’s multiple new kinds of megalodon and roaming skeleton ships, and the kraken now has new abilities such as slamming players against the water.

These enemies are more dangerous and plentiful. They also drop way way more loot and grant special commendations that can be spent on unique gear such as a golden cannons or a barnacle encrusted ship hulls. For a while, enemy encounters were rare but Shrouded Spoils makes monster hunting an entirely viable activity for players sick and tired of digging up buried treasure. 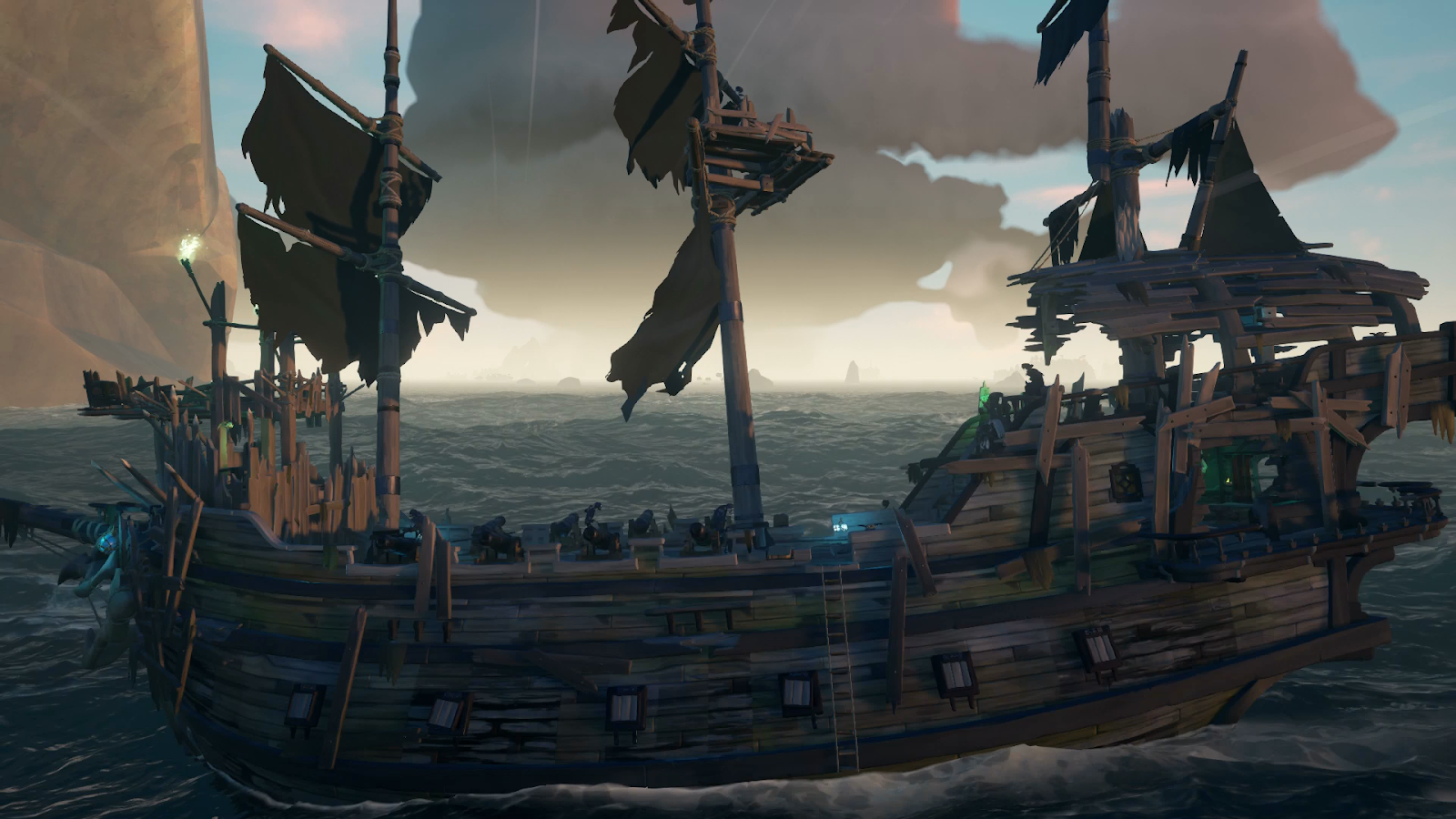 I am running into way more enemies now, and they’re dropping more loot for the trouble.

Sea of Thieves’ economy has always felt grindy and unrewarding. The path to earning the status of Pirate Legend was slow and reliant on delivering chickens and digging up lots of buried treasure. It was so grindy that the first Pirate Legend controversial had other players bring him loot to speed up the process.

There was also a lack of cool gear to earn. Shrouded Spoils tries to fix that by giving players new and distinct ship customisations based on different monsters, as well as new gear options for Legends such as golden shovels and other tools. These range from new ship wheels to new cosmetic designs for cannons.

The add-on brings back cursed mermaid statues, hidden figurines that can be destroyed to greatly speed up progression in the previously slow paced Merchant’s Guild, one of the game’s three major factions that has missions mostly involving boring deliveries. It also generates more skeleton forts that players can attack for more treasure.

As a result, there’s more loot than ever and some stuff that you might actually want to spend your spoils on.

Sea of Thieves will probably never have the rich storylines and super in-depth quest that some players want, but as time has gone on, it’s expanded to offer a more vibrant world. Yes, you’re still fighting skeletons and sharks.

But these threats are evolving and there’s finally good reason to sail the seas and really engage with what’s there. If the long grind and slow pace dissuade you from playing, you might want to grab some friends and set sail.