SonicFox Steals The Show At The Game Awards

Dominique "SonicFox" McLean took home the award for Best Esports Player tonight at The Game Awards in Los Angeles. The 20-year-old full-time student and fighting game ace gave a candid acceptance speech that was one of the night's more heartfelt moments.

"I just really really enjoy playing video games competitively," he said. "I've never really done it for the fame. I just enjoy the rush of beating people up, y'know?"

"I've never been this nervous," he said. "This is more scary than EVO."

McLean won against four other nominees including the stern-faced Street Fighter master Hajime "Tokido" Taniguchi and Sung-hygeon "JJoNak" Bang of the Overwatch League's New York Excelsior. He was also nominated in the Best eSports Moment category for his decision to switch play-sides against his rival Goichi "GO1" Kishida during the Dragon Ball FighterZ finals during this year's Evolution Championship Series fighting game tournament in Las Vegas.

McLean would win that match, and has continued to win tournaments in Dragon Ball FighterZ and Injustice 2 throughout the year.

Stepping on stage in his now-iconic fursuit, McLean gave an acceptance speech that was funny, honest, and worth watching.

Throughout the speech, McLean struggled to catch his breath and took time to call attention to the condition of fellow esports professional Curtis "Rewind" McCall's father, who has Stage 3 cancer. After winning the Injustice 2 Pro Series Grand Finals in Chicago, Illinois last month, Maclean donated $US10,000 ($13,888) to McCall's family. 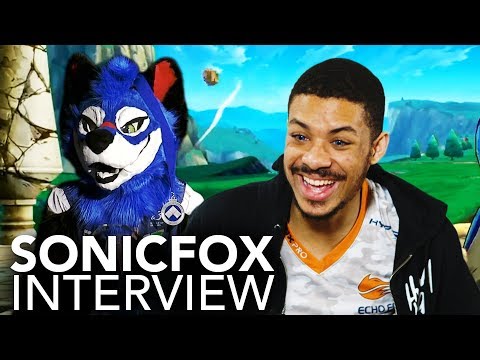 Meet SonicFox, The Queer Furry Who's Destroying Everyone Else At Fighting Games

Dominique "SonicFox" McLean competed in his first Mortal Kombat tournament in 2011 at age 13. Back then, his opponents didn't know what they were up against. But SonicFox knew his own truth: he was queer, he was a furry, and he rocked at fighting games.

McLean's speech went longer than planned. Attendees at the show could see that the teleprompter read "Please wrap it up." But before he did, McLean had one more thing to say.

"I guess I just gotta say that I'm gay, black, a furry — pretty much everything a Republican hates — and the best esports player of the whole year, I guess!"