A series like Robbie Thompson, Jim Towe, Sean Parsons, and Brian Reber’s Spider-Man/Deadpool is exactly where you’d expect to see Marvel gently poking fun at its fellow comics houses, but it’s going to be difficult to top the jabs put on display in this week’s new issue.

As tends to be the case whenever Spider-Man and Deadpool end up having to partner with each another, the heroes have found themselves tasked with the odd job of saving the universe from the oddest of threats, while also bending the rules of traditional comic books.

This time around, the pair are stuck in a particularly hostile corner of the Negative Zone that’s been plunged into a bit of nasty, bug-related chaos, thanks to the somewhat obscure Jack Kirby-created Eternals character Ransak.

All one really needs to know about Ransak is that he was cast out of his community of Deviants (frequent enemies of the Eternals) because of his unnaturally good looks — a rarity for the Deviant species. While Ransak is typically depicted as a hero in Marvel’s comics, when Spider-Man and Deadpool encounter him in this week’s Spider-Man/Deadpool #43, he’s in something of a berserker rage. It culminates in his punching a hole through reality (lol, comics) and triggering a stampede of insect-like farm animals, much to the dismay of the universe’s inhabitants.

As offbeat as this entire premise is, it’s all quickly explained by Jannor and Kolly, two members of the Negative Force, a group of fellow heroes who’ve sworn to protect the Negative Zone from danger.

Because of his ability to understand that he exists within the larger universe of our world’s comic books, Deadpool correctly points out that Jannor looks suspiciously like DC’s Big Barda, but rather than leaving the joke to be an off-handed wink at the competition, the issue takes things a step farther by actually dedicating a whole page to aping Tom King and Mitch Gerads’ critically acclaimed Mister Miracle series (in which Barda is a main character). 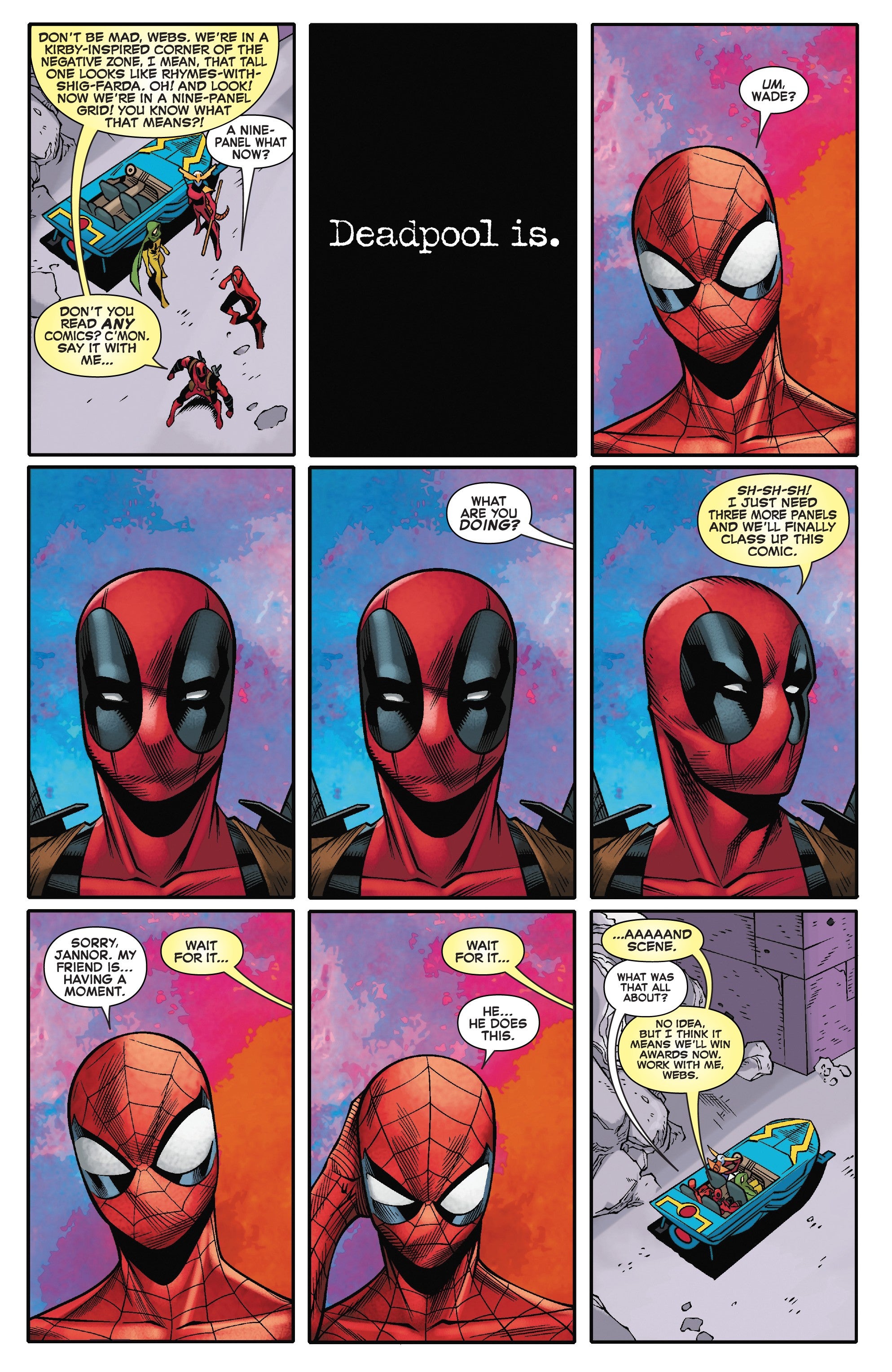 While Tom King is widely known for his love of using nine-panel-grid pages to punctuate comics with emotional intensity, it’s something that’s come very much back into the public consciousness since Mister Miracle recently re-introduced the phrase “Darkseid is…” (originally from Grant Morrison’s “Grant Morrison” JLA run) to tease one of the comics’ larger existential mysteries.

While Deadpool’s spin on the phrase and use of the nine-panel grid doesn’t really have all that much bearing on Spider-Man/Deadpool’s plot, it’s definitely a testament to the way that Mister Miracle’s resonated with comics fans and creators in recent months — and a reminder that the Big Two are at their very best when they’re actually playing nice with one another.