This may be controversial, especially considering that very startling Chidi reveal, but Tahani Al-Jamil is the best human character on The Good Place. In fact, she’s the second-best character overall (second, because nobody beats Janet), and the reasons why have become very clear in season three.

The Good Place season three has taken a couple of holiday weeks off; it’ll be back December 6 for its 10th (of 13) episode. If you watched the most recent instalment, you know that there’s about to be yet another major situation change.

When we see Eleanor, Chidi, Jason, and Tahani again, they’ll presumably be hiding in Janet’s AI “void space” along with demon-turned-good-guy Michael, having made a desperate escape from a pack of cranky demons determined to send them to the real Bad Place once and for all.

What awaits our hapless (and apparently now dead again) Soul Squad within Janet’s computer brain? The Good Place, which has proven incredibly adept at reinventing itself in ways that feel fresh and inspired (rather than gimmicky), will no doubt surprise us again. But while we’re minding the gap between episodes, there’s no better time to reflect on the character who’s steadily become the best human in the bunch: Tahani Al-Jamil.

Yes, that’s Ms. “Congratulations Beautiful” (the translation of her name, at least according to Tahani) herself.

Before she was cast as Tahani, the delighfully incisive Jameela Jamil had apparently never acted before, though she had plenty of experience in front of the camera as a British TV host (and she’d already mastered an American accent, as we saw when Tahani went undercover as a Bad Place hot dog torture specialist named “Rhonda Mumps” in season two).

Granted, Tahani is more of a secondary character who doesn’t have to do a ton of heavy emotional lifting — while The Good Place is a sitcom, it periodically deals with some very complex themes. But Jamil’s gotten to do more than just aghast reactions, celebrity name-dropping, party-planning, and looking fab in cocktail dresses this season.

She’s still done all that, of course, but season three’s return to Earth has allowed Tahani to dig deeper in ways she couldn’t while stuck in purgatory. 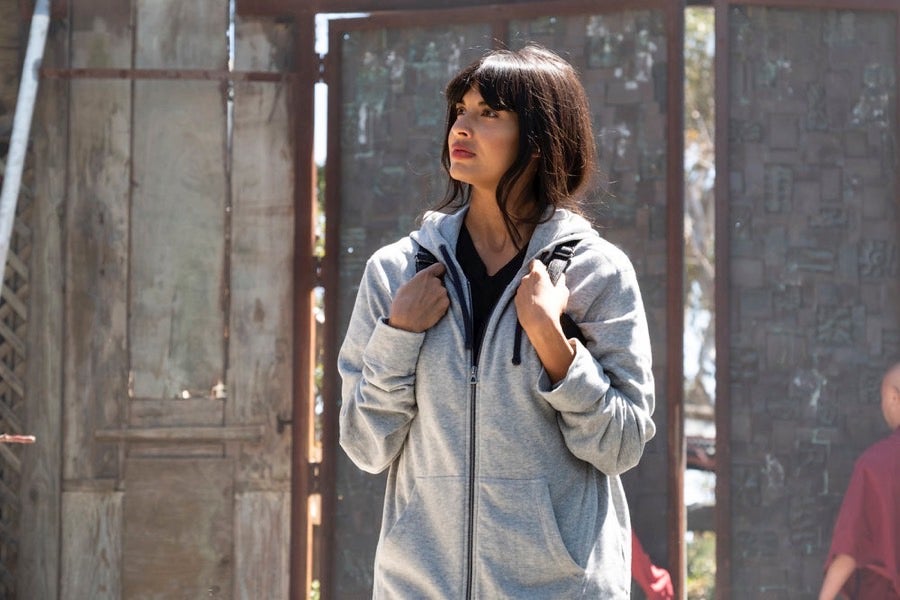 As we learned in earlier seasons, Tahani’s sent to the Bad Place for a few reasons. She’s not an evil person, but she’s snobby and vain and obsessed with being the centre of attention. All of her issues stem from her troubled relationship with her sister, Kamilah, a famous artist.

Flashbacks have made it very clear that Kamilah was the favourite child of posh parents who delighted in pitting their daughters against each other. And Tahani’s original death came when she tried to topple one of Kamila’s statues and became trapped underneath — a fate she’s spared from when Michael saves her in a rebooted timeline (though of course Kamilah immediately takes credit for the rescue).

Having survived that nightmarish experience, Tahani makes a big show of humbling herself, seeking enlightenment at a remote Buddhist monastery (a clever callback to Jason’s fake identity as a monk when we first met him in season one). The true reason for her spiritual quest is revealed when the scene changes to Tahani hawking her best-seller, Get Out of the Spotlight, a guide to “shedding your need for validation from others.”

Of course, validation is all Tahani seeks, even if she’s fooled herself into thinking otherwise. So she’s quite insulted when Michael, disguised as a sleazy New Age investor, calls her out and compliments her brilliant scam. That’s the plot nudge The Good Place needs to have her join Chidi’s ethics study, but it’s also the first moment that Tahani really starts to reconsider her new lease on life. 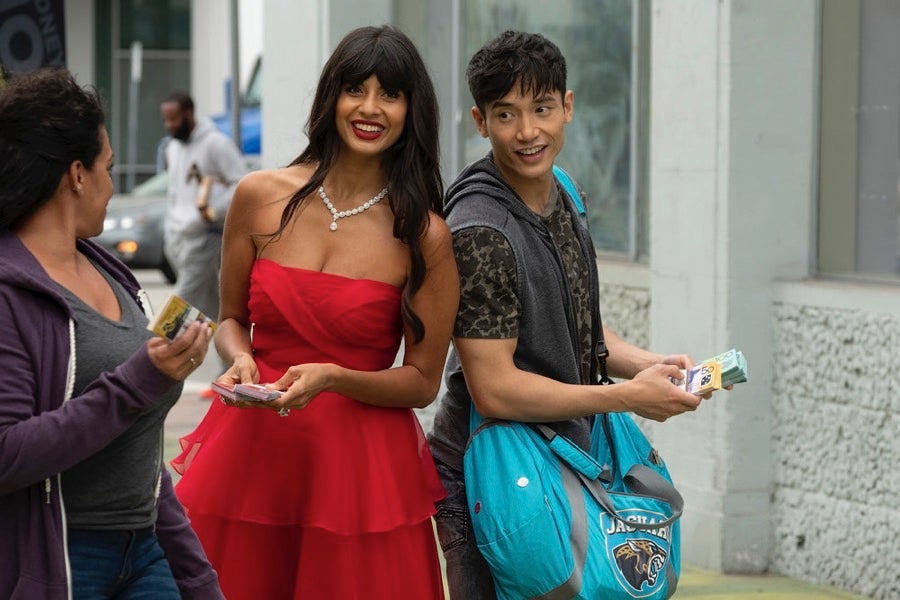 Her journey’s not without some bumps in the road. After Michael and Janet worry she’ll endanger the study by hooking up with Jason, they engineer her reunion with an old flame who just happens to be another (fictional) second-banana sibling: Larry Hemsworth, merely a handsome doctor rather than a godlike Hollywood superstar.

Like most romantic relationships on The Good Place, though, it comes to an awkward end; in this case, it’s because Tahani hastily marries Jason, though not for romantic reasons. Confronted with the realisation that she’s doomed — and that her knowledge of how the afterlife works will prevent her from ever earning enough “points” to shift her trajectory in the other direction — she decides instead to devote herself to making the world a better place.

How? Well, like many things in Tahani’s world, it first involves large sums of money. After making an anonymous donation to the Sydney Opera House, then roaming around the city handing out cash to random strangers, she decides to marry Jason (strictly platonically) so she can give him half of her fortune.

It’s a start. But she makes her biggest strides when the group renames themselves the Soul Squad and sets out across the globe, trying to help their various relatives from suffering their same Bad Place fate.

This, of course, leads to an important family reunion. 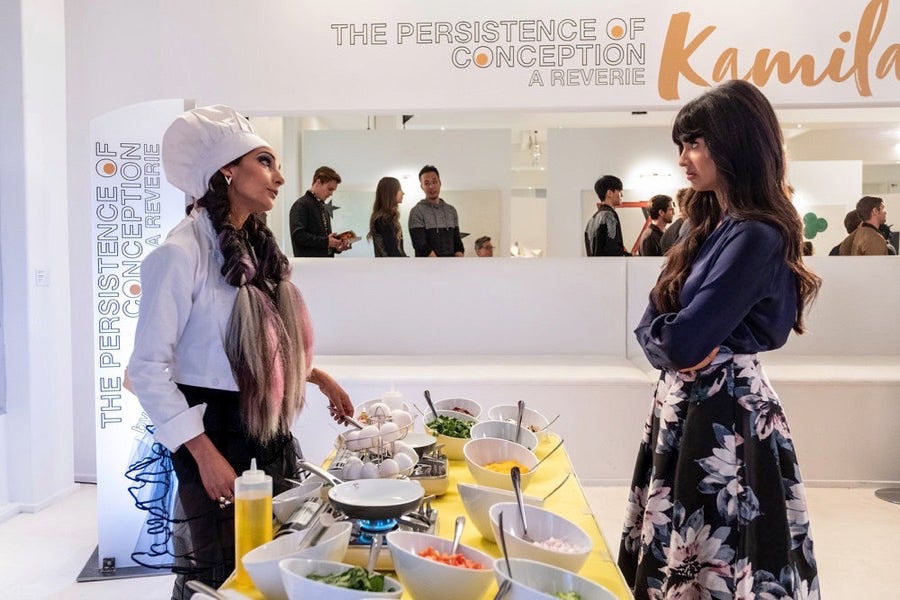 The exhibit includes an omelette station for some reason. (Photo: Colleen Hayes, NBC)

It’s taken three seasons to get here, and it doesn’t go well at first. Tahani’s apology is met with a snooty rejection, followed by agonising humiliation (and a bit of zany violence) at another one of Kamilah’s pretentious art exhibits.

Just when you’re starting to suspect that Kamilah is truly as awful as her art, redemption comes when Tahani realises their sibling rivalry was manipulated into existence by “the absolute worst wankers on Earth”: their parents. Not only that, but the fierce ongoing competition between the sisters is the very source of Kamilah’s creative inspiration. Fortunately, she’s able to recognise that once Tahani points it out, and they finally make heartfelt amends.

Kamilah even gives Tahani co-credit for an art piece that evokes her axe-swinging antics at the museum.

As things stand, Tahani is finally on good terms with Kamilah. Her generosity without any need for recognition has been established. And there’s also her friendship with Eleanor, which has steadily evolved from polite contempt to genuine affection between two polar opposites. Tahani is now the best version of herself she’s ever been, and she did a lot to find her own way there, though Chidi’s ethics lessons probably helped a little. Confronting Kamilah was the hardest thing she’s ever done, and she got through it.

On The Good Place, Eleanor provides relatable bitterness, Jason is goofy comic relief, Chidi supplies intellectual dilemmas and chilli, and Michael and Janet run the show with their unbeatable combo of snap decisions and super-genius. But Tahani, always the most glamorous, has emerged as the hopeful heart of The Good Place. If she gets sent back to the Bad Place, let’s hope her haughty “Mirror Centaur” isn’t there to make things even worse.