A Game About Slapping An Arse Gave Me Embarrassing Flashbacks [NSFW]

Story time! I went to an all-girls’ school. My friends and I had that special bond of closeness that apparently comes with synced-up periods and measuring the length of each other’s winter leg hair.

This, obviously, led to a brief era of trying to catch one of the others unawares with the most impressive, most unexpected spank possible. We’re talking sneaking up behind each other in the hallway and laying one down that made the earth shake. If I couldn’t read your palm from the imprint, you weren’t doing a good enough job.

NSFW WARNING: This piece contains many bums. Some are animated GIFs.

In time, this led to the era of being very, very cautious about our bums. Which meant that, one sunny day in the common room, when I saw my friend Alice bending over in front of me, it was like a quick-time event: The world became slow-motion and greyed-out as my splayed hand took a run up.

It wasn’t until afterwards, as I stood proudly in the reverberating spank-sound that rippled into the silence, that I chanced to see Alice across the room, decidedly un-spanked, and saw the innocent spankee stand and turn to reveal that she was a girl that had joined the school only three months before. And, therefore, definitely not Alice.

My genius solution was to immediately face the other way and pretend that I hadn’t just been caught literally red-handed. I felt, and still feel, awful. It might have been an accident, but she didn’t know that. Sometimes I wonder what she must have thought of me, as I lie awake at night reliving my worst decisions.

But good news! I can now relive that horrifying moment of mistaken bumdentity with spank-focused game, Slappy Ass! And I can pay $US3.50 ($5) on itch.io for the pleasure!

Slappy Ass doesn’t mess around. It does exactly what it says on the tin: It’s a screen full of one giant arse, which you can spank. Spanking fills up a heart meter — which pulls double-duty as a butt icon! So clever. When the meter gets full, it gives you a gift, which ranges from new skins and underwear to new toys that you can use on the arse.

In Slappy Ass, the player starts off with the most basic of slappy tools: Their own hand. You can expand your box of toys by filling the spankmeter, which will get you items such as the riding crop, a pair of lips (to kiss the bum), and some rather medieval-torture-like instruments, which can zap the butt while making a guitar noise, or some kind of… pink… portal… thing?

I’m not sure if I’m just not au fait with butt-spanking implements, or if that’s just a fantasy toy. I can’t even tell if it feels nice. It looks a bit like what I imagine breast pumps feel like. At least it keeps the spankmeter going up! 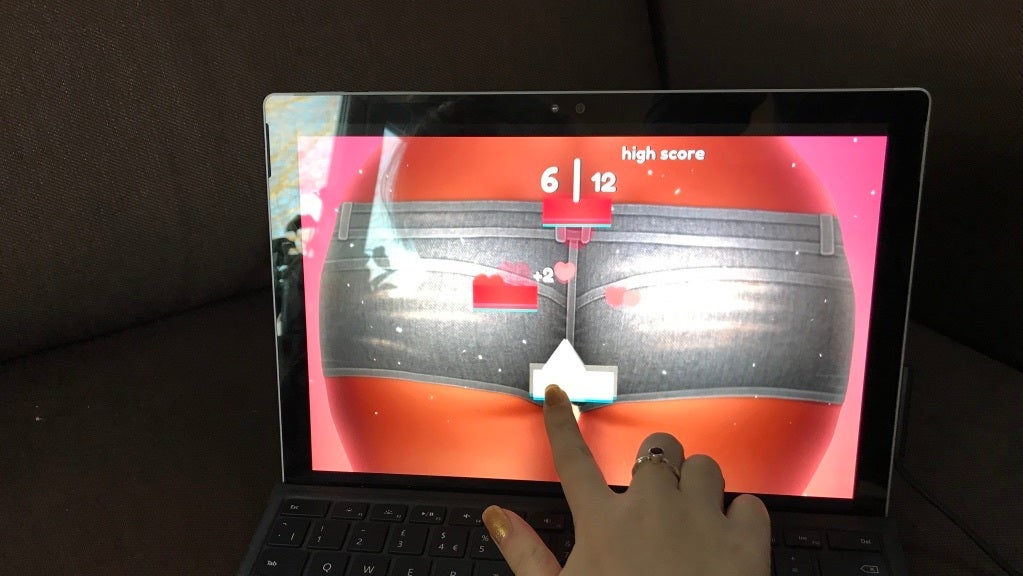 My own hand, seen here playing the rhythm game. What does that have to do with spanking? I don’t know.

It seems as though once the arse is used to being slapped, however, that the meter fills up slower. It feels less like a fun slappy game at this point and more like one of those endless clickers, even if the “clicking” part is slightly more interactive than usual — the disembodied buttcheeks have a pleasantly perky bounce to them, and redden nicely whether you’re spanking, whipping or portal-torturing them.

The butt stuff starts getting a little repetitive after a while, especially with the slow increase in the meter refills, and it can be a little disappointing to spend five minutes on spank-clicking only to get an ambient background for your trouble, or worse, a zombie skin for the butt that makes it look as though you’re into a very specific type of necrophilia.

There are minigames, which range from a dull Guitar Hero-like rhythm game with only one note to a slightly confusing bar-filling game that seems to require you to mash-spank the butt, but it isn’t clear what these are for, exactly, other than breaking up the butt-monotony.

The butt twitches even when you’re not spanking. Or maybe it’s dancing.

Spanking can be a lot of things. It can be fun, painful, entertaining, sexy, punishing, and even so embarrassing that you melt into a puddle of shame. I had not yet realised the potential of spanking as a tedious exercise until I played Slappy Ass, the game that begins as a fun, silly jiggle simulator and slowly develops into a dull clicker with no real reward unless you really love to spank CGI physics-enabled butts in a multitude of colours.

Ah, well. $US3.50 ($5) spent on a couple of hours of spanking that made for some entertaining gifs? At least no butts were hurt in the process. And for what it’s worth, 10 years on, I’m really sorry, [NAME REDACTED].