A Tour Of The Animal Crossing Town One Woman Spent Nearly 4,000 Hours Building

Animal Crossing games are meant to be played in regular, relaxed sessions, creating a life for yourself among the annual ebbs and flows of each game’s village. In just about every regard, it’s designed to be playable, theoretically at least, forever. 85-year-old Audrey, who’s spent thousands of hours playing the game, is proof of that.

On January 1, an indie game designer by the name of Paul Hubans shared the activity log for his grandmother’s Animal Crossing: New Leaf save file on 3DS. He’d been helping Audrey transfer the data to a new 3DS since her existing one had recently broken when he realised just how much of an Animal Crossing diehard she was. She had logged 3,580 hours in the game over four years. That’s a little over two and a half hours a day.

Inspired by the feedback he received on social media, Hubans returned over the weekend with a YouTube video of his grandmother taking him on an actual tour of her New Leaf town. In it she shows off her main character, Mayor Audie, her house, and the quiet, floral town she escapes to each day.

“We put these bridges in,” she tells her grandson while crossing over the many creeks flowing through her village. There are flowers and fruit-bearing trees everywhere, and because it’s winter, plenty of snowballs to push around and make into snowmen or, as Audrey prefers, to roll off into the creeks. She likes to spend most of her time digging up fossils and telling the villagers she likes (Filbert the lazy squirrel is her favourite) they have to stay in her town. The ones she doesn’t like, she tries to get to move away.

“Do you like doing things for these villagers every day, or do you find it annoying?” Hubans asks at one point.

“Some of them are,” she replies. “Like this one here is into exercising,” she says of Frank the eagle. Presumably Audrey is trying to give Frank the boot. The residents also keep giving her flowers even though she has no more room for them, having already planted them almost everywhere possible. “They keep dropping them down in front of me and I have to keep throwing them away,” she says. 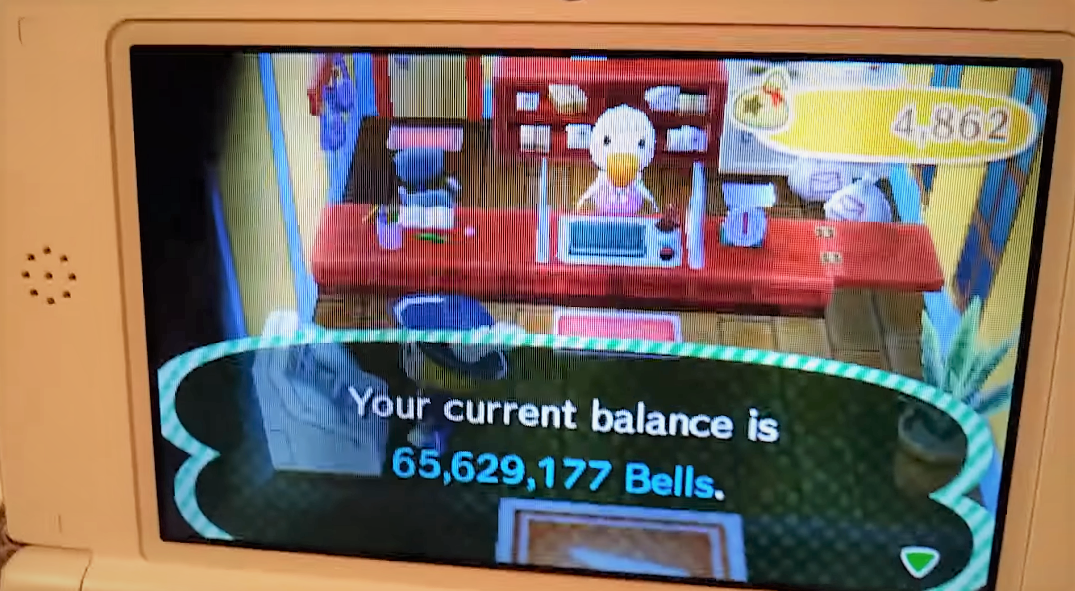 Her house also bears the hallmarks of someone who has played the hell out of the game. Trophies for fishing adorn the walls while almost every square is filled with some exotic piece of furniture.

The main room of her house is full of bowls of fresh fruit, while the side and back rooms are for storage, full of fish tanks, clothes, and all kinds of other decorative belongings that Marie Kondo would have a field day tidying up. Meanwhile she’s banked over 65 million bells. The most expensive item in the game, the Royal Crown, only costs 1.2 million.

So what’s still left to do after you’ve Warren Buffetted Animal Crossing: New Leaf? Complete your bug collection, apparently. Despite the thousands of hours she’s put into the game, Audrey still has 9 insects she hasn’t yet caught. She also says she’s not in any rush though. Maybe after another 3,000 hours, or at least until the next Animal Crossing comes out. People on Reddit have already chipped in to buy Audrey a Switch so she’ll be ready when it eventually hits.